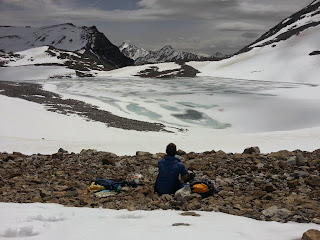 Today was rather overcast and a bit windy. I'm writing this from inside the cosy Lischana Hütte with a pot of tea, waiting for rain, whereas yesterday we were outside in t-shirts and blinding sunshine.

After an 8am breakfast - this is not a 'crack of dawn' establishment, though Silke will oblige if asked, Markus and I were requisitioned to the site of Heinz's love nest, where what looked like the components of a garden shed were piled onto a foundation of pallets. We helped Heinz and Marlene (who luckily is a carpenter) rearrange the piles and erect one wall. Unfortunately, as we lifted the second wall that should have meshed with the first, it fell to pieces. Shame! But Markus and I obtained our honourable discharges, leaving the others to assemble the shed bit by bit.

We bade Markus farewell, and he headed down the hill and home to Dornbirn. It was great to see you Markus, and thanks for orchestrating this bit of our trip.

Meanwhile, Sue and I headed up the good path to the plateau, Lais da Rims,  south east of the hut. After only a few minutes we encountered a traverse across a steep snow gully. I baulked at this but managed to find a way around the obstacle by tiptoeing up some very loose scree, at the top of which a couple of ptarmigan were having a 'love-in'. They were still at it when I returned several hours later.

Sue entertained herself by taking flower pictures while she waited at the top of her 'easy scramble'. I should have brought my ice axe and crampons instead of leaving them in the car.

There were no other technical difficulties as we ascended to the plateau at around 2950 metres. By now we were wishing that we had snow shoes as we kept sinking deep into the snowfields that dominate the scenery up here. We met the man with his son who are staying at the hut, then three Swiss who had walked up from San-charl and admitted to being a little disorientated. We comforted them by pointing out the path. "Three Swiss taking directions from an English couple" they mused "it doesn't seem right, but thank you."

We continued slowly onwards in the footprints - well, footholes - of the Swiss as far as an iced lake at 2856 metres,  4.5km from the hut. Lunch time - nice bread, cheese and tomato from Scuol's Co-op. Today's picture is taken from here. You should be able to see the Ortler Alps in the distance, but today's visibility was far inferior to yesterday's.

Two joggers postholed past us, and a heavily laden pair stumbled towards us through the snow. We saw them later descending slowly to reach the path to Sur-En.

A front was slowly approaching. The limited views were diminishing. We flogged our way back up to the plateau's high ridge, retracing our steps to the high point. This is the start of the ascent of Piz Lischana (3105 metres). It's mostly a tricky scramble, but the walk up to the first high point - 3044 metres, was easy so we went up, despite increasing wind and cold. Sue justified the visit by finding Glacier Crowfoot and a variety of Rock Jasmine that has her stumped. This is probably higher than any point reached on last year's Pyrenean Adventure.

Then it was back down to the hut to complete our 9km walk with 700 metres ascent by around 3.30, for a welcome pot of tea and another leisurely afternoon and evening. On the way we passed the shed/love nest and were impressed to see that it now has four substantial walls, if not a roof. Heinz and Marlene are probably rectifying that defect whilst I write this and Silke prepares supper.

That's all for now from a very warm and cosy Lischana Hütte, where Khaled Hosseini's brilliant novel 'And the Mountains Echoed' has been succeeded by the rather lesser literary qualities of the adventures of Agatha Raisin.

Here's a slideshow for the day (37 images)
Next Day
Back to Index
Posted by Phreerunner at 16:53

Khaled Hosseini’s books are brilliant. Once you start them you cannot put them down.