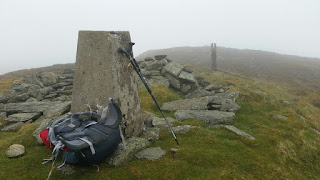 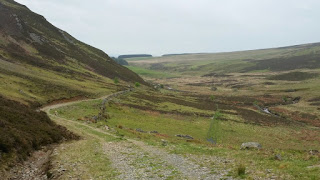 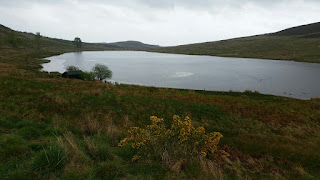 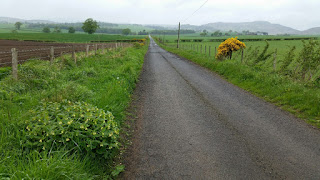 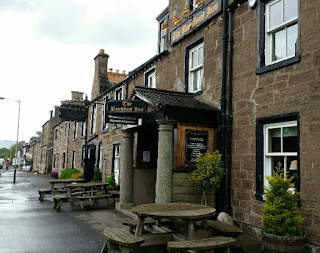 Weather: warm, calm, no midges, dull until 11 am with 600 metre cloud base, then rain, becoming heavy

I woke to heavy cloud, but the rain seemed to have passed for the time being, so it was easy (after another very early night) to be up and away by 7.45. It was 6°C outside but the barnacle geese appeared to be on heat.

After 45 minutes I was standing in a cloud on top of Meall nan Caorach at 623 metres. The cloud base was about 600 metres. So no chance of an inversion today!

The scenery was good (apart from a nearby sea of wind turbines) - rolling hills rather than jagged peaks - and I admired that as I yomped north east through clumps of cloudberry flowers, accidentally missing out the acclaimed summit of Creag Ghorm. I'll  leave it for Gibson to do as my proxy at some future date.

After yomping through an area full of mountain hares and the occasional startled deer, a grassy track was picked up. This headed to an abrupt conclusion at the head of Glen Shee.

Another quite easy yomp took me into Glen Shee to another track leading past a farm to a roadhead beyond Little Glenshee.

By now it was raining again, but I'd had three hours of dry weather and the path past Loch Tullybelton and Drum Tick to the Glack was a delight.

The bird life on the lochans was impressive, with swans, ducks, geese, sandpipers and numerous other birds. I'm out of my depth identifying them all, but I know a black grouse when I see one, and there were plenty here.
Another destination for Ken and Anne.

I reached the Glack only to be surrounded by barking dogs. They were soon under the control of a local man, and the owner, a retiree from New York, arrived. They wanted to know what I thought of their expensive new metal stiles over the deer fences. There had been complaints that they are too steep. I found them fine, albeit steep. The American had owned the place for nine years and claims responsibility for turning it into a sanctuary for wildlife. But as I walked the final 3 km down a dead straight lane to Bankfoot, past numerous (probably justified for farm access) no parking signs, I wondered about the lack of parking facilities for visitors. The car park at the roadhead by Little Glenshee would need to be used to avoid the walk in from Bankfoot.

Bankfoot is a village approximately 8 miles north of Perth and 7 miles south of Dunkeld. It had a population of 1,136 in 2001. We usually rush past on our way north, but tonight it's my home.

I'm in the Bankfoot Inn, a restored 18th-century coaching inn which has  real ales (I like the Hogs Back Ale), and a lounge bar with fire and a restaurant. All very convenient as it's still raining.

Until 1931 Bankfoot had a railway station, but now the trains take a different route north. So with the A9 also out of sight, it's a fairly peaceful backwater.
The inn was quite busy with diners. My lasagne with chips and salad definitely had the edge over last night's pasta and tuna twist.
It was good to hear that Don had enjoyed today's 80 mile Rannoch bike ride, despite the rain, and Sue managed to climb the four Glen Lyon Munros - not without incident! Today's pictures: The summit of Meall nan Caorach Glen Shee Loch Tullybelton The long road from the Glack Bankfoot Inn
Posted by Phreerunner at 20:19

An Inn for the night - enjoy the comfort & haven from the rain. You are nearly there now! (I slept for two days on getting home btw)

Your days were probably harder than mine Cary, even though you weren't lugging a suitcase around with you...

It makes a change that it's raining as long as it's not too windy. It enhances the aroma of the countryside.

Yes Alan, if you don't have a cold!

I"m now back from a visit to big brother and wife in Hereford so able to follow you more easily using my iMac desktop. all good stuff, sounds like a varied route - so much better than me sitting on a train yesterday for a large part of the day.

Hopefully you'll soon be back on the trail Conrad, and you do live in a beautiful part of the world...