'Summer in the Alps' Day 7 - The Notch Revisited 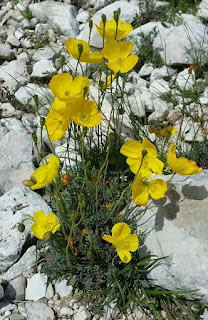 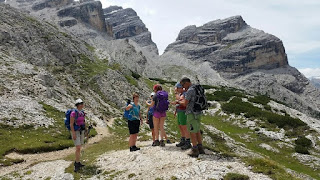 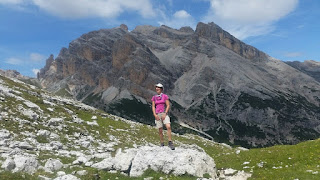 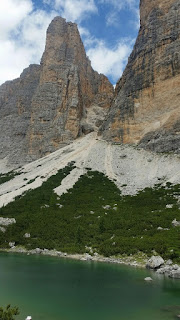 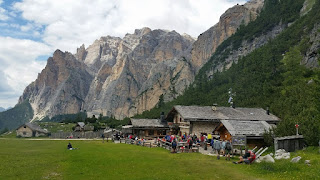 Back in the early 2000s, on a walk along Alta Via 1 (AV1), one of our party became ecstatic about the notch in the route that lay ahead. That person has for ever thereafter been known as 'Notchy'. He will be joining us next week.

On a more recent visit we found the path through the notch to be closed, so today's visit was a pleasure to be relished.

The 465 bus that took us on a half hour journey to the start of the walk - Capanna Alpina - was unpleasantly crowded. But what do you expect for €1.50 on a busy Sunday?

Twelve of us set off in good spirits, up the gently rising well graded path to a fine viewpoint, Col de Locia. Stunning views across to the Marmalada glacier. After a considerable wait for a member of the party who should have chosen an easier walk, we progressed through meadows of Rhaetian poppies to a point where we doubled back towards the notch.

After another wait we set off at a modest pace, pausing after a while to admire a well fed marmot and a concerned Black Redstart. A long break in a sheltered spot helped pass the time for eight of the twelve of us, whilst three more helped to coax the backmarker onwards.

By 1pm we had reached the notch, aka Forcello di Lech, and lunch was enjoyed by all of those who hadn't got cold waiting. Luckily it was a warm, calm day, if a little draughty at the notch. We chatted to a German lad walking AV1. His plans had required adjustment due to the Lagazuoi hut being fully booked tonight.

Leaving the laggard and her three minders, the rest of us enjoyed the superbly engineered descent to Lech de Lagacio, where we savoured a further break.

The next stationary interlude was at Rifugio Scotoni,  after another brief descent. They were very busy on the sunny Sunday afternoon. As was the 4.35 pm bus when we had ambled from the Rifugio back down past Alpine Butterwort and Bladder Gentians to Capanna Alpina.

Welcome tea back at base, then another good meal at Hotel Gran Fanes.

Today's pictures:
Rhaetian Poppy
First view of the Notch
Looking across to the Lavarela summits
Lech de Lagacio looking up to Forcello Di Lech
Outside the Scotoni hut
Posted by Phreerunner at 06:37