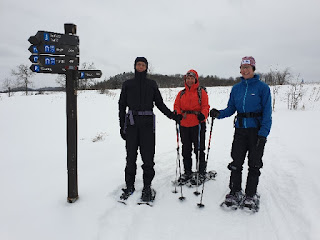 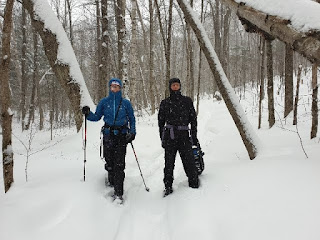 After an overnight dump of snow, and with no fresh grooming of the ski trails, we decided to drive to a new venue - P15 (Cross Loop Road) on the way to Wakefield.
There's no skiing from here, but a snowshoe trail leads in less than 5 km to Healey Cabin. This is route 70, and we took it on a cool morning with a biting wind and snow flurries. Once in the shelter of the forest, the four of us soon warmed up and enjoyed the walk through fresh snow to the cabin.
Ken's snowshoe straps encountered a mass failure, leaving him plodding for the rest of the day in his boots. Luckily the compacted snow was manageable, if not as pleasant without the proper footwear.
A large party of schoolchildren was leaving Healey as we arrived. Just as well - we needed their space. We lunched in front of the large windows, admiring the Juncos and Blue Jays attacking the feeder. A lone Cardinal bird added a small splash of bright red to the scene.
On the return journey, Helen retraced our steps along #70 - a 9 km 'there and back'. Sue, Ken and I took the #71 loop after a while. A thin trail with lots of undulations. We met two ladies at the bottom of a hill, but otherwise the path was deserted. En route we passed an emergency shelter that I recognised from last year's Fat Bike ride from Wakefield - so we've 'linked' those routes.
By the time we got back to the car at 2.30, the three of us had covered about 13 km, mostly in continuing snow flurries at around minus 10°C.
The large pot of tea back at home was most welcome.
Helen has been catering wonderfully, but last night she was given a break whilst Sue cooked moussaka, and tonight it'll be fish and chips at the pub around the corner.
Posted by Phreerunner at 21:48