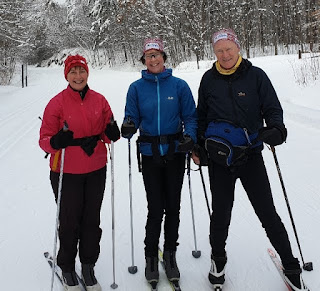 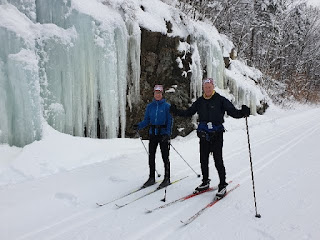 With Ken tired out from the excesses of a winter triathlon (skate 6.2 km, run 5.2 km, ski 5.1 km - it took him 1 hour 14 mins), Sue, Helen and I headed off to parking lot number 6 (P6) - Mackenzie King on a relatively warm afternoon. Heated gloves weren't needed!
The 10 km ski to Pink Lake and back was fairly quiet apart from a few large groups of youngsters.
It was fairly overcast, so poor light for photos, nevertheless a pleasant, gentle, 1.5 hour outing with fresh snow on the branches making for a picturesque scene.
P6 > Champlain and Gatineau Parkways > Pink Lake (named after the Pink family who used to live there) > return the same way apart from the very last few hundred metres, where we went via #7.
PS Bright red Cardinal Birds were seen at this morning's parkrun.
Posted by Phreerunner at 02:12