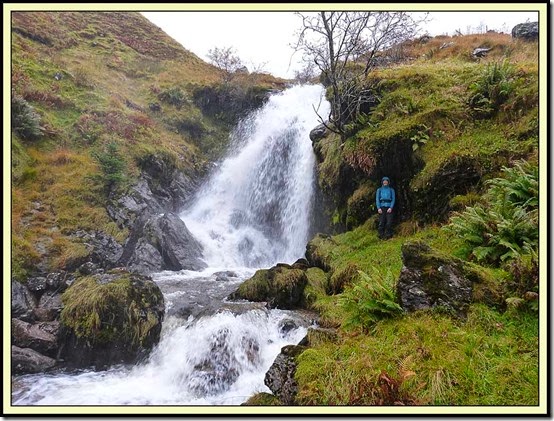 Les and Izzy chose a different weekend and a different venue for their second year of organising this event, and enjoyed the company of more than fifty past, present and future Challengers at the Crianlarich Hotel, whose hosting of the event was admirable apart from the crucial matter of Saturday evening’s meal.

Sue and I travelled up to Crianlarich on Thursday, giving Graham Brookes a lift and enjoying a leisurely evening with good food at the hotel.  A few other Challengers lurked nearby.

Whilst Graham was dropped off near Bridge of Orchy to climb a couple of lesser hills, Beinn Udlaidh and Beinn Bhreac-liath, Sue had unfinished business on Sgiath Chuil, having climbed its neighbour earlier this year.

We parked beside the A85 and wandered down to the River Dochart. 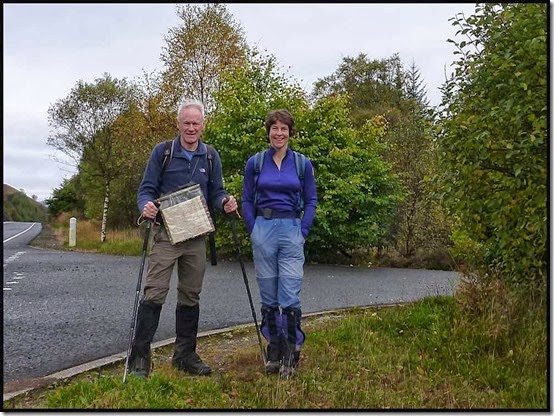 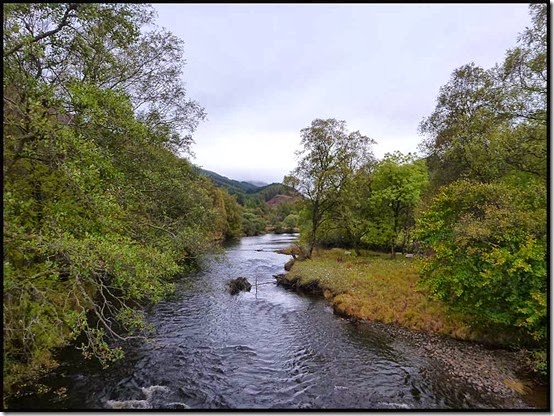 The private road to Auchessan Farm welcomes hill walkers but not their vehicles.  The weather was surprisingly warm. 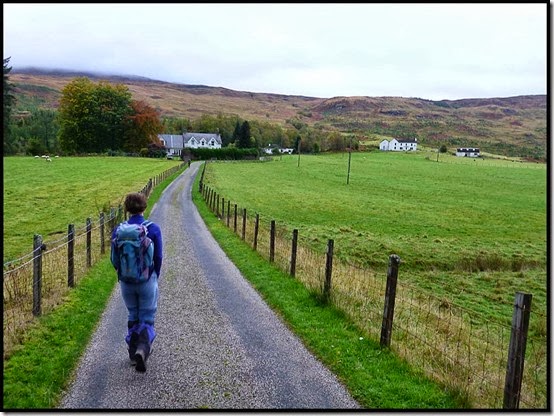 Above Auchessan, the path passes some old pig sties before heading towards Allt Riobain and ascending below a low cloud base. 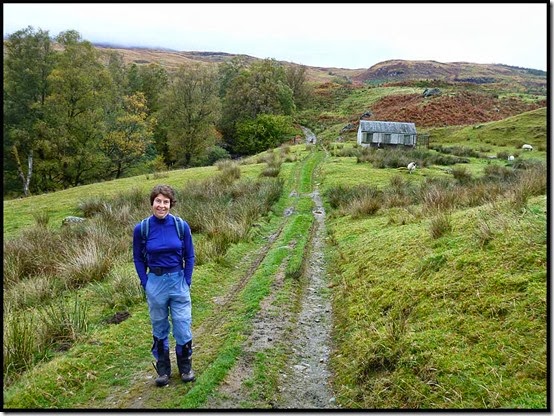 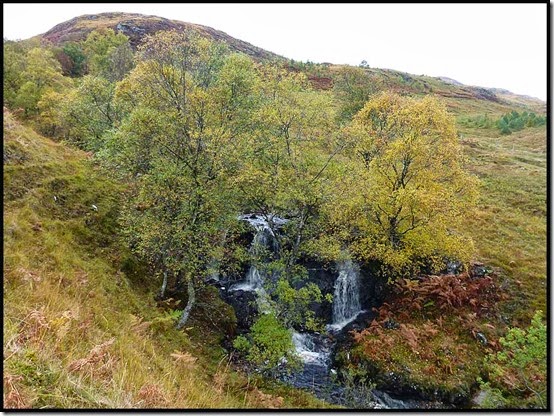 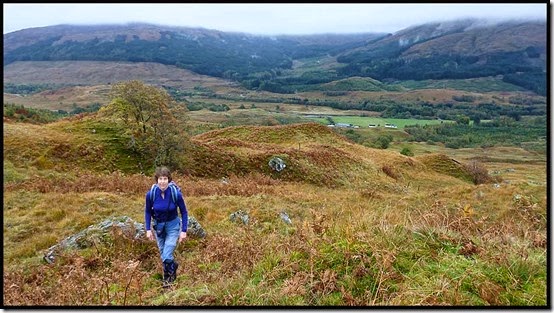 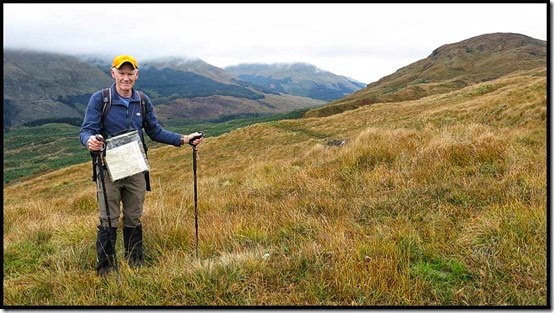 The extensive blanket of cloud at about 600 metres soon had our fleeces dripping, so a tea break was enforced and the rest of the day was spent in waterproofs. 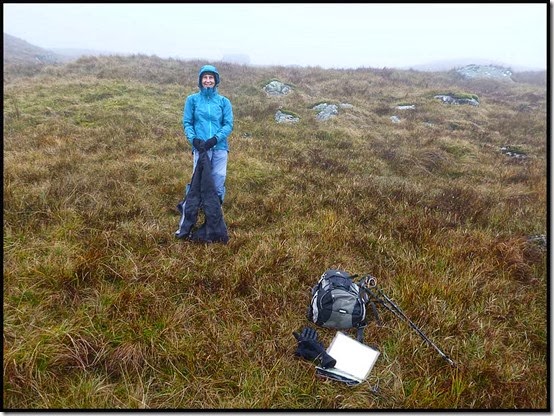 The walk was dominated not only by low cloud and steady rain, but by the seemingly constant roar of rutting stags, sometimes silhouetted against a misty horizon. Now and then ribbons of hinds trotted meaningfully past us. A hare with white paws dashed away from the first summit, on which Sue is pictured below (Sgiath Chuil – 921 metres), and a flock of six ptarmigan, already in more or less full winter plumage, monitored our progress between that summit and Meall Glas – 959 metres, which we felt obliged to visit due to the benign conditions and despite Ralph Storer’s character Baffies’ inclination towards Killin’s tea rooms in preference to walking up this ‘Well-matched but ill-starred couple (of hills) that will never feature highly in Magnificent Mountains of the Highlands, however many volumes that series runs to’. 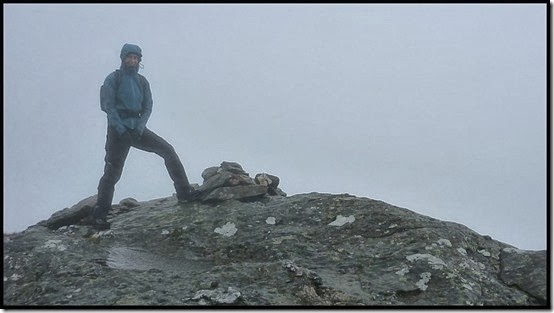 Gloves needed to be wrung out every now and then; warm water lubricated the wrinkled contents of our winter boots.

The cloud wasn't thick, but on descent it clung stubbornly to the hill, releasing us to a duller view than those on ascent, at only about 400 metres. On the way we passed some pretty waterfalls. 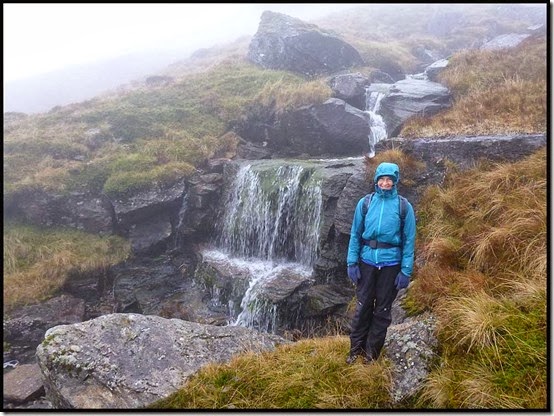 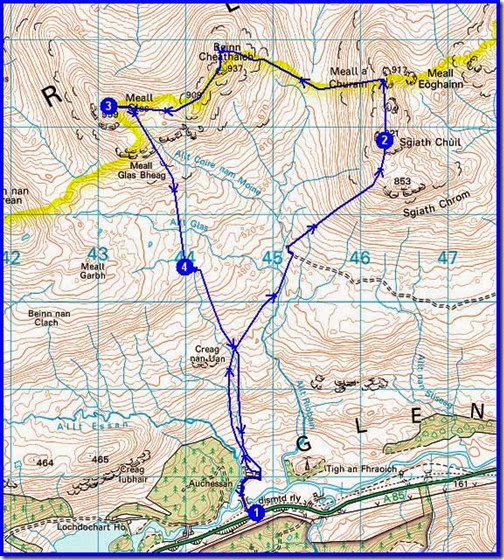 Having encountered nobody on the hill, it was good to spend the evening with an assortment of TGO Challengers, some of whom had braved the weather to backpack to Crianlarich from a variety of starting points.

I’m not sure whether our ‘Pyrenean Adventure’ slideshow went down well or not, but we certainly enjoyed some ‘after dinner’ Challenge pictures from David Towers and Peter and Barbara.

It was raining again, but no sooner had we installed ourselves in the car than we jumped out again to witness the spectacle of Stanier Black Five number 44871 steaming majestically out of Crianlarich station. 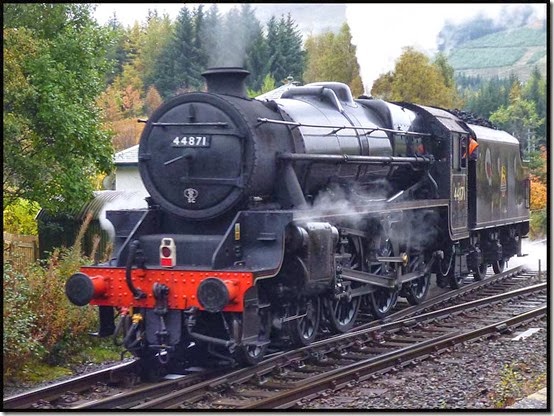 The engine appears to be on holiday from the East Lancashire Railway, so we probably pass it frequently on our journey from South Manchester to Bacup.

A longish drive saw Graham, Sue and me wrestling our way through Loch Lomond’s dreaded twists and turns, roadworks and traffic jams, to pass through Tarbet and Arrochar before heading over the Rest and be Thankful pass to reach Butterbridge in Glen Kinglas.

From the car park, our route up to Bealach a’ Mhargaidh looked choked with cloud, but we set off regardless. 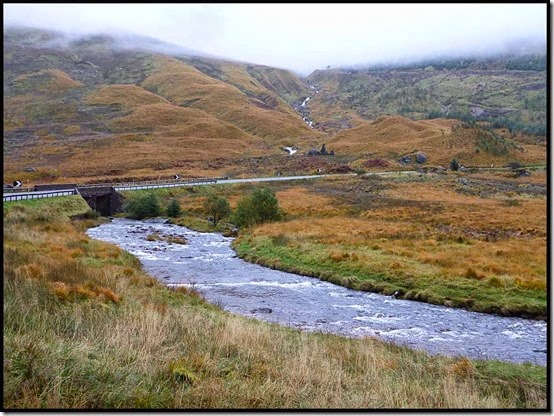 The valley view was sombre as we looked down to the single arched Butterbridge, over which the eighteenth century military road crossed Kinglas Water. 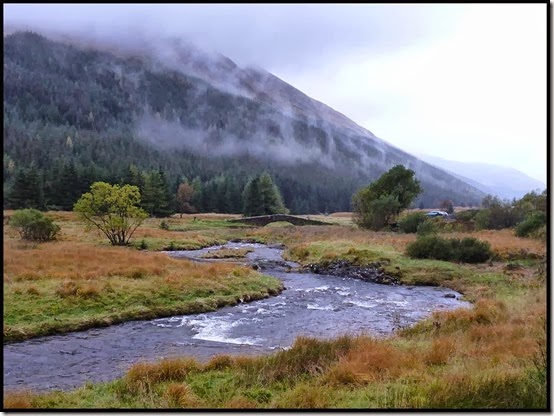 As we climbed, the vague shadow of Beinn Ime leered at us through the cloud. 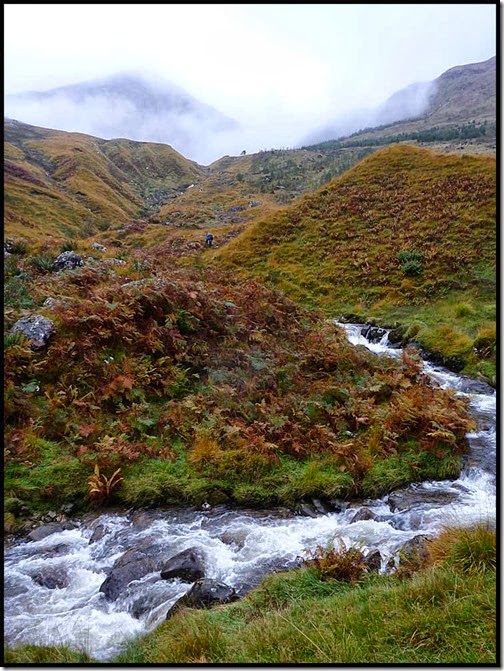 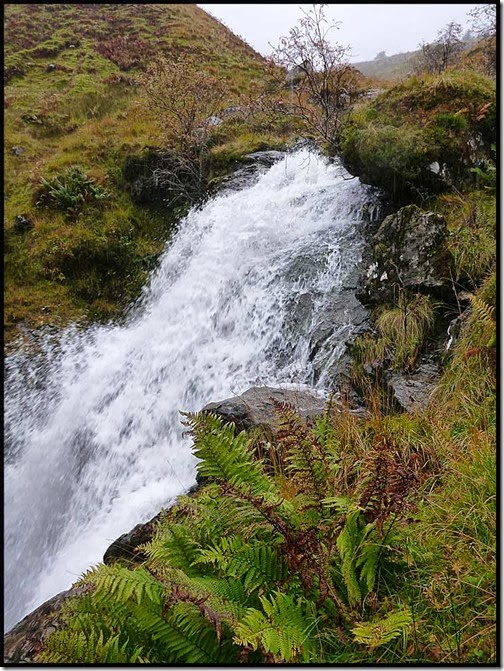 Shortly before the final ascent to the bealach, the cloud lifted to reveal a steep thrutch thereto. 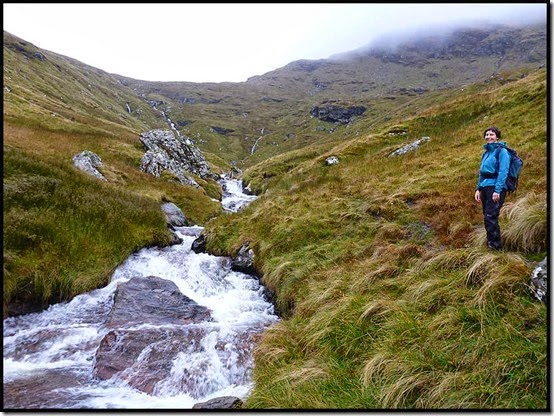 After the faint path had deposited us on the broad bealach, or small plateau, that separates Beinn Ime (1011 metres) from Beinn Luibhean (857 metres), we uneventfully scaled both summits on a 'there and back' basis.

Here, Sue and I have proof of our visit to Beinn Ime’s summit, which I clearly recall ascending in sunshine and midges, some time ago on 16 September 1968. 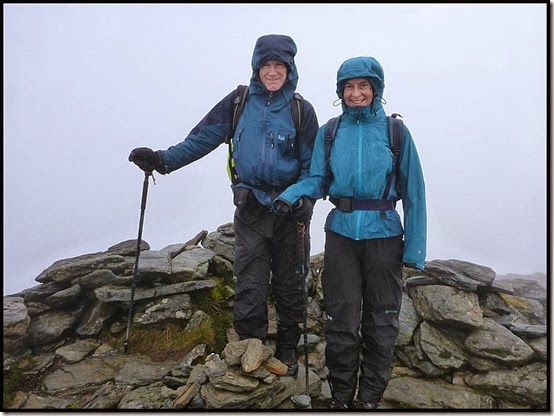 Lunch intervened, then Graham and Sue shot off ahead to reach Beinn Luibhean.  I’d been keeping them waiting all day due to my current lack of fitness, but on this occasion I somehow reached the summit before them due to their somewhat scenic alternative route. 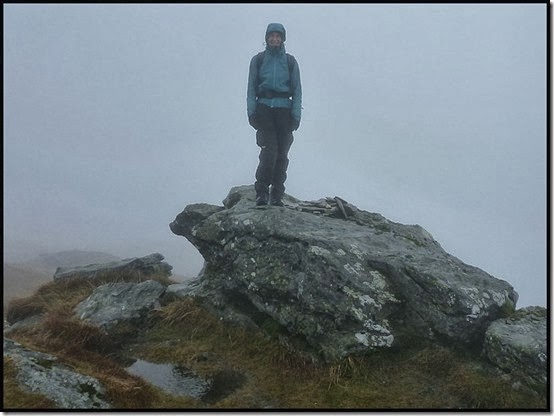 We saw no deer today, despite stalking taking place in Glen Kinglas, nor ptarmigan or hares, just a lone golden plover at the summit of Beinn Luibhean , and a snipe near the bealach, below which we could just about make out the route of our descent. 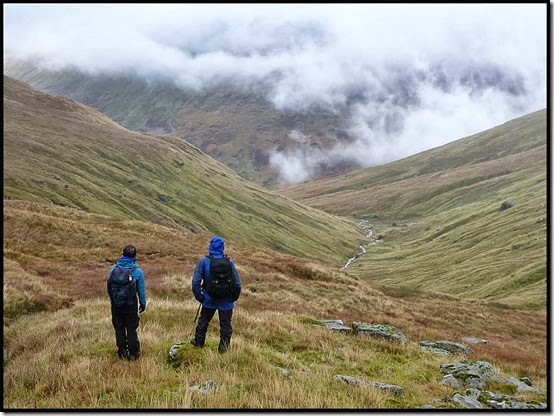 It even stopped raining for the last half hour, enabling clothes damp with condensation to air a little.

According to Ralph Storer’s resident photographic expert, ‘F-stop’, we shouldn’t leave the car park before ‘taking time to view Beinn Ime at its best, rising photogenically behind the bridge in evening light’.  Sue did try with this image. 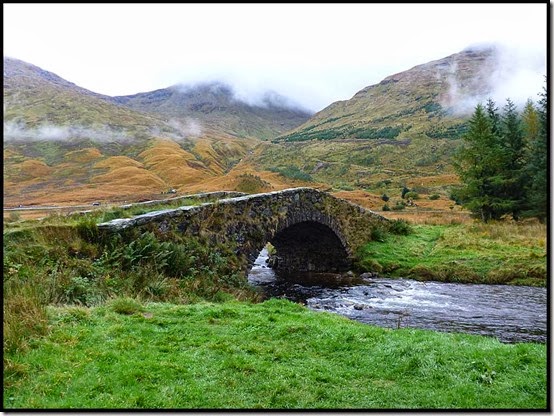 As on the previous day, heavy rain lashed the screen as we drove back from our parking spot, where an ambulance and two police cars had noisily arrived to deal with a stalking incident. The Crianlarich Hotel then formed the venue for a sociable evening with about 55 TGO Challengers.

10 km with 1000 metres ascent,  in 5.5 hours, and no idea as to whether the incident at involved a stalker, a deer, firearms or a sudden illness. There was no headline involving the heroic rescue of an elderly stag with dementia, for example. 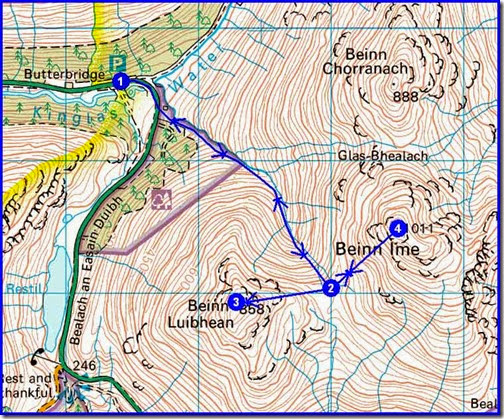 I didn’t go up this hill.  The start across the River didn't appeal to me, and I didn’t feel like having to go faster than comfortable in a vain effort to keep up. So I left G and S to wander in more rain up the hill whilst I stayed in the dry comfort of the car.

They soon managed to wrestle their way across the river and through the forestry, to gain the foreground ramp, where they are just visible to the bottom right of the picture below. 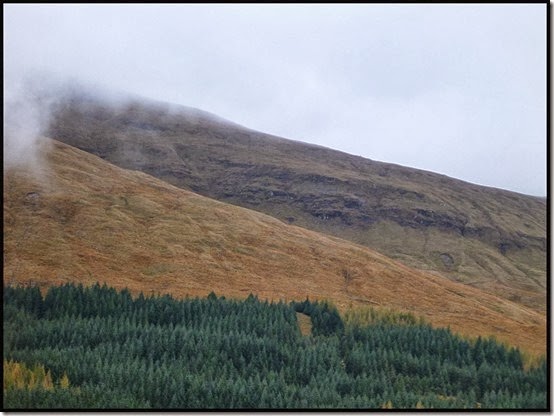 With the cloud base below 600 metres they again failed to get views from the summit. Down in the valley the rain came and went, as did my view towards the hill. I'd missed out on a hill I'd not been up before, but at least G and S could go at their own speed (it took them three hours) without constantly having to wait for me as they had done the previous day, and hopefully I'll enjoy better weather when I finally get around to climbing it.

After that we went home.

Last year’s report is here; the year before here.  Moving the event from Fort William to Crianlarich hasn’t brought an improvement in the weather! 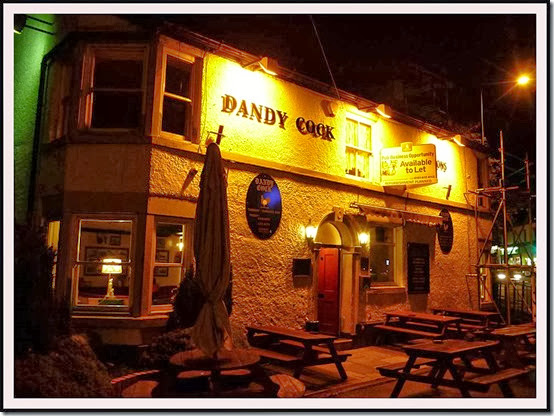 Graham, Sue and I chanced upon a break in the showery weather for this moonlit stroll from Disley, over Marple Ridge and past The Romper, before dropping down to the Peak Forest Canal for the return to Disley, where, as can be seen, not all is well in the world of the Dandy Cock.

This was a fairly easy 6 km evening route in moonlight, once we had navigated our way through the golf course and a few patches of bog en route to Turf Lea Farm.

A lovely evening, with rain immediately after we'd finished. We eschewed the Ram’s Head, from which I recall starting the occasional night hike in my student days, and adjourned to The Grapes with SWOG.

Here’s the route – it took about an hour and a half: 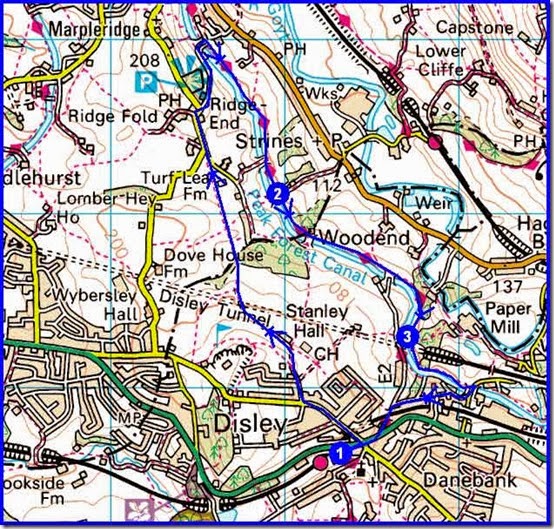