Cycling Around the World – Moods of Future Joys and Thunder & Sunshine, by Alastair Humphreys 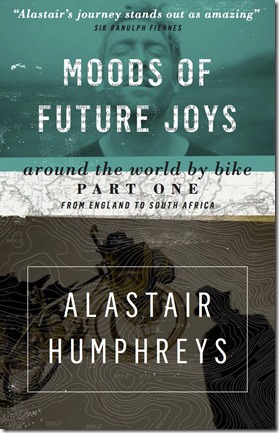 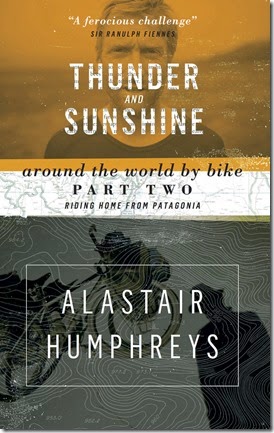 I came across Alastair Humphreys during the TGO Awards Outdoor Blogger of the Year debacle. I was impressed to discover that he seems to be making a career out of being an adventurer, motivational speaker and author. I decided to buy his children’s books, about ‘The Boy Who Biked the World’, as a Christmas present for Sue’s nephew, Alexander. It was a good choice, and Sue and I enjoyed a cheeky read of these books before wrapping them.

That led me to buy the Kindle versions of Alastair’s ‘adult’ narratives that he wrote after his 46,000 mile, four year journey around the world. They were his first books and I wasn’t expecting anything exceptional; I just wanted to show respect and support for his choice of career in a very small way.

Both Sue and I have now read Moods of Future Joys and Thunder & Sunshine. They are excellent, arguably ‘exceptional’, books, taking the reader around the world with Alastair, experiencing his ‘highs’ and ‘lows’ both in moods and metres.

I commented on the books here, so I’m not going to try to write my own detailed review, especially as I basically agree with Guardian reviewer, Susan Greenwood. Alastair’s pages provide links to her review of his first book, which review is unfortunately blighted by adverts, so I’m reproducing it below.

That’s all really, though some readers may be interested in following Alastair’s blog, or investigating his forays into ‘Microadventuring’.

Reading about someone else's remarkable achievements tends to make you do one of two things. You either (a) reach for another bar of Dairy Milk/ can of Stella/ packet of Doritos in a depressed funk of self-pity, or (b) leap off the sofa, thump your chest and scream "carpe diem" until your lungs burst.

With cycling experiencing something of a renaissance at the moment, Alastair Humphreys' book Moods of Future Joys could be just the ticket to inspire a mass expelling of air.

You have to hand it to him. Whereas most people subtly back out of those classic Friday-night pub boasts ("I'm totally going climb Everest using just my teeth") as soon as the hangover kicks in, Humphreys stayed true to his words - and 46,000 miles later he'd cycled around the world. Which puts us all in a terrible situation because if a lad from Yorkshire can overcome international terrorism, dysentery, a crushing Siberian winter and a month without showering to achieve what Sir Ranulph Fiennes calls "the first great adventure of the new millennium" then there's not really any reason why we all can't.

He may not have meant it but Humphreys' engaging, sometimes brutal, sometimes comic style is above all a call to arms. Or rather wheels. His book deals with the first leg of his four-year odyssey which started rather unceremoniously with a wrong turn out of his road in Airton, Yorkshire, in 2001 and ended on the glorious coast of South Africa more than a year later.

The intervening miles, which could probably be described as one of the longest detours in history after September 11 made central Asia a no-go, are documented with unflinching honesty. Cycling across Africa on a route passing through Sudan, Ethiopia and Kenya is apparently a brutal experience but one, it would seem, that is worth the effort. Humphreys conveys his loneliness, wanderlust, grit and despair in a manner reminiscent of the great tradition of British explorers. He may have spent many hours asking why the hell he was doing this; anyone reading his book may, in the great tradition of watching British explorers, be more curious as to whether this man was insane or not.

But anyone who has ever got on a bike when they'd really rather not will find a kindred spirit within these pages. It is a common misconception that cycle touring is "fun". It is not. [I don’t agree – Ed] Fun refers to bonfire night, sitting in the pub with mates or bunking off work to go to Brighton for the day. Being woken in the dead of night by solvent abusers demanding money, cycling for three days into an unrelenting headwind or pedalling along the floor of the Blue Nile canyon with the weight of a looming excruciating climb out playing on your mind is not fun. Euphoric, boring, unrelenting, unique, exhausting, liberating, lonely. These are words that describe a long journey by bike and Humphreys weaves them into his chapters in such a way that you can't say you weren't warned but perhaps you're a little intrigued to try them out for yourself anyway.

If you did decide to, you should hope for some friends like Humphreys', who litter his tale with some superb comedy moments. How worldly wise he must have felt on receiving an email from Simon, who joined him briefly in Amman, crying out for help after ill-advisedly shaving his buttocks to make cycling less painful. And only an Englishman and a Frenchman could pass the miles in Mozambique with a competition to see who could cycle the furthest with their eyes closed. Cyclists are a strange lot.

But the great running theme throughout the book is solitude and the effect of transient friendships on one's soul - in Humphreys' case, this manifests itself in raging tears and tactically used swear words. Occasionally this gets monotonous but then it was probably monotonous for him too. In fact the entire book has been an exercise in self-determination after it was rejected resoundingly by every publisher and agent he approached, leaving Humphreys to publish it himself through website Print and Be Damned. For a man who claims in conversation not to be a solitary person, he has consistently chosen to go it alone - a glimpse perhaps, of a steely motivation which this adventure clearly required but which is only alluded to by the author.

Moods of Future Joys isn't a rollercoaster ride of laughs and high jinks, nor is it a serious or poetic description of Africa. Ultimately it is not even a book about cycling to Cape Town - because as all cycle tourers will tell you, the destination is not the important part. A guy asked whether it was possible to cycle around the world and then he set off to see. Be careful not to choke on those Doritos as you leap off the sofa.

(For readers local to Timperley, we have these and other books on a spare Kindle that’s available for short term loan – just ask.) 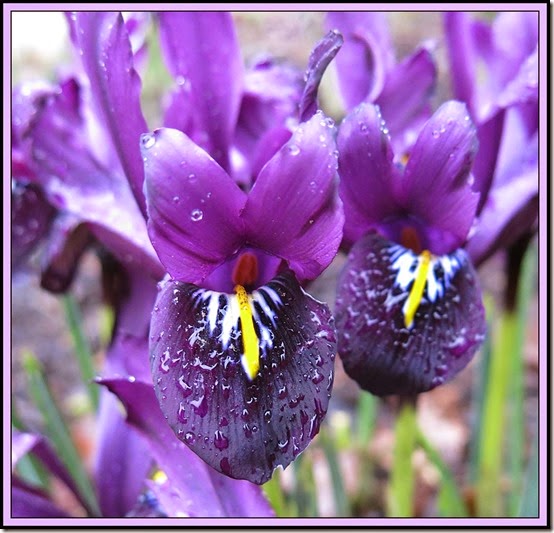 Yesterday, Sue and I popped down to the Winter Garden at Dunham Massey. The idea was to teach me how to photograph the flowers. My habit of just turning on the Macro setting isn’t very reliable, so we spent some time over a coffee discussing a better technique.

My new found knowledge (now forgotten!) was not put into practice as I didn’t risk using the camera in the rain that greeted us on leaving the café. However, Sue did pull hers out from under her jacket to take these pictures. 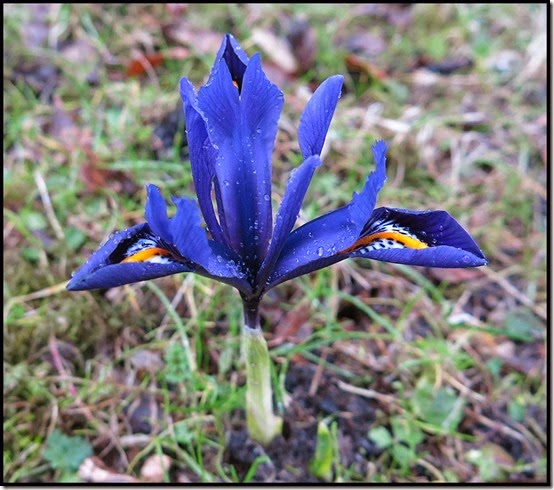 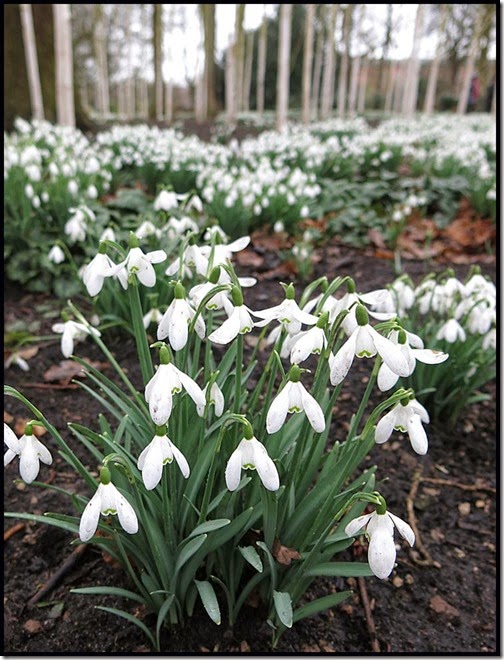 I’m not sure of the precise identity of the top two flowers, but the flowers above are obviously one or more of the many varieties of Snowdrop in the garden, and the flower below is Helleborus 'A G H WhiteBlotched'. 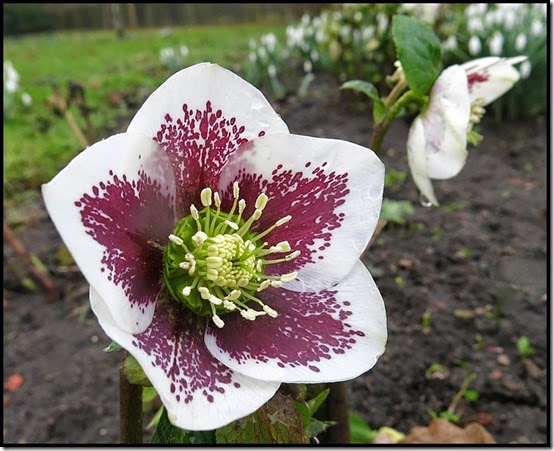 We didn’t spend long in the garden. It was wet. Sue then adjourned to the swimming pool to get even wetter, but my walk home along the canal towpath took the biscuit for wetness and resulted in me getting rather muddy, as well as soaking wet due to forgetting to take waterproofs to combat the large soggy snowflakes. Duh! 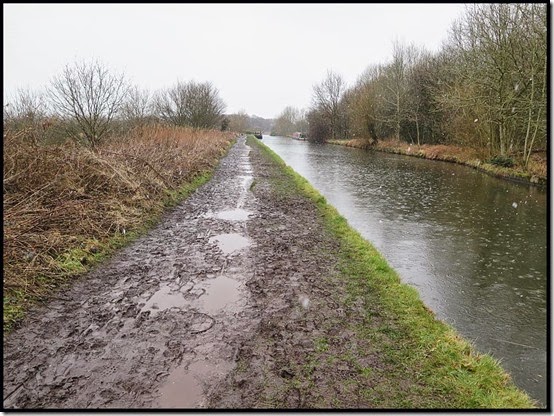