B of the Bang – ‘Britain’s Tallest Sculpture’ 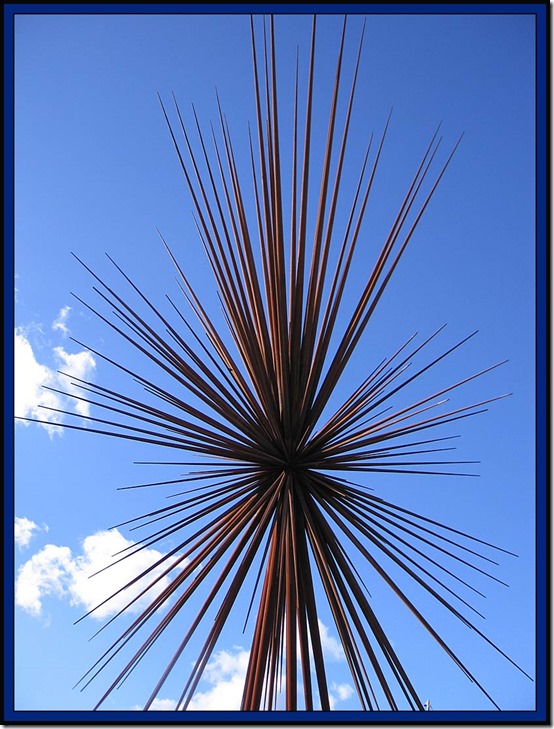 This posting was stimulated by Wuxing Nick’s comment on the previous posting showing at least 24 images of Manchester landmarks.  He confused the sculpture with a palm tree! (Ha-ha!)

So, being confined to barracks, so to speak, here’s an entry about a Manchester landmark that will soon be lost to the mists of time.

B of the Bang was a competition winning sculpture for the City of Manchester Stadium where the 2002 Commonwealth Games were hosted, now the home of Manchester City Football Club, and known as the Etihad Stadium for sponsorship purposes.

The top picture was taken from what turns out to be a rather dangerous position below the sculpture, whilst the picture at the foot of the posting shows it from the safety of the front of the stadium.  If I’d known its future I’d have taken more pictures.

The tallest sculpture in the UK until the completion of the 60 metre tall Aspire sculpture in Nottingham in 2008, it was taller and leaned at a greater angle than the Leaning Tower of Pisa.  It was inclined at an angle of thirty degrees from the vertical and represented a major challenge in both construction and engineering.  It was commissioned by urban regeneration company New East Manchester Limited to mark the success of the 2002 Commonwealth Games and was designed by Thomas Heatherwick and selected by a panel including experts and local residents.

The name 'B of the Bang' was inspired by Olympic Gold Medal winning sprinter Linford Christie, who said that he started his race on the B of the Bang.

The spikes were hollow and as light as possible, with five supporting legs made from thick heavy steel, although visually identical to the other spikes. At the centre of the sculpture was a complex core from which all of the spikes radiated.
It was made of a special type of steel that would weather to varying degrees over the surface of the sculpture.

The sculpture was commissioned in 2003; construction overran and the official unveiling by Linford Christie was delayed until 12 January 2005. Six days before the launch, the sculpture suffered the first of three visible structural problems as the tip of one of the spikes detached and fell to the ground. Legal action started a year later, resulting in an out-of-court settlement totalling £1.7 million.

In February 2009, Manchester City Council announced that the sculpture would be dismantled and placed in storage, as the "only practical alternative". The council expressed its commitment to working closely with the design team in order to "determine whether there is a robust and affordable strategy for the re-construction of the structure on the site". Despite the promise of storage and potential reassembly, the core and legs of the sculpture were cut apart during removal. The core was sold for scrap in July 2012, while the 180 spikes remain in storage.

B of the Bang originally stood 56 metres (184 ft) tall with 180 hollow tapered steel columns or spikes radiating from a central core. It was angled at 30 degrees and supported by five 25 m (82 ft) long, tapered steel legs which connected to the spikes 22 m (72 ft) above the ground. The sculpture weighed 165 tonnes, with the concrete in the foundations weighing over 1,000 tonnes, including a 400 m2 (4,300 sq ft) reinforced concrete slab. The foundations are 20 m (66 ft) deep.

The sculpture was made from the same weathering steel as the 20 metre high Angel of the North sculpture.  This steel gradually develops a tightly adhering oxide layer as it is exposed to the elements. This layer inhibits further corrosion by reducing its permeability to water. As part of the design, the spikes swayed slightly in the wind in order to withstand gusts in excess of 100 mph. At the time of construction a time capsule was placed in one of the spikes of the sculpture, containing children's poems and paintings, due to be opened circa 2300.  The location of the time capsule after dismantling is unknown.

In total the sculpture cost £1.42 million to design and construct - twice the original estimate, as the initial costing had neglected to include installation costs!

The Structural problems and legal action

The tip of one of the 2.1 m (6.9 ft) spikes detached and fell from the sculpture on 6 January 2005, only six days before the official unveiling. After inspection, the event went ahead as planned.

Four months later, in May 2005, a second spike had to be cut off by fire-fighters after it was discovered hanging loose. At that time the sculpture was closed off to the public, and the junction and pathway near the sculpture were temporarily closed. As a result some of the joints were re-welded, with equipment put in place to prevent excessive movement.  This consisted of retrofitting tip weights to 70% of the spikes' weights.

Despite these modifications, B of the Bang remained fenced off, prompting a local newspaper campaign to 'Get It Sorted'. In May 2006 a total of nine spikes were removed from the sculpture and taken away for metallurgical analysis, to discover the stresses being placed on the steel.

It was announced in October 2007 that Manchester City Council were taking legal action against the makers of the sculpture, with the aim of completing the necessary repairs to the sculpture. In November 2008 this culminated in an out-of-court settlement being reached between Manchester City Council, the project's designers Thomas Heatherwick Studio Ltd, and the engineering and construction subcontractors Packman Lucas Ltd, Flint and Neill Partnership and Westbury Structures Ltd. The agreement was to pay the council £1.7m in damages for breach of contract and negligence.

Acting on a report in January 2009, the city council recommended that B of the Bang should be dismantled and placed in storage until funds could be raised for its safe reinstatement. The report recognised the sculpture's aesthetic value for Manchester, and Manchester City Council committed itself to working with the artist to reach a long-term solution. One possibility involved the replacement of the steel spikes with alternatives made from carbon fibre, although the report underlined the necessity for extensive testing.

In January 2009, Antony Gormley, creator of the Angel of the North - to which B of the Bang is often compared - spoke out in support of the sculpture, stating that, "It is a great tribute to Manchester that this ground-breaking work was commissioned. To allow it to disappear would be a loss not just of an inspirational artwork but also of the council's nerve."

Despite Gormley's plea, removal of B of the Bang began in April 2009. More substantial hoarding was erected around the site and demolition firm Connell Brothers Limited began removing the spikes with oxyacetylene cutting equipment.

Although the council had promised to store the complex central core and legs, these too were cut apart during removal, casting doubt on future prospects for the landmark sculpture's return, and in early July 2012 the core was sold as scrap for £17,000.

So now you know.  Next, perhaps, the ‘real’ palm trees of Manchester… 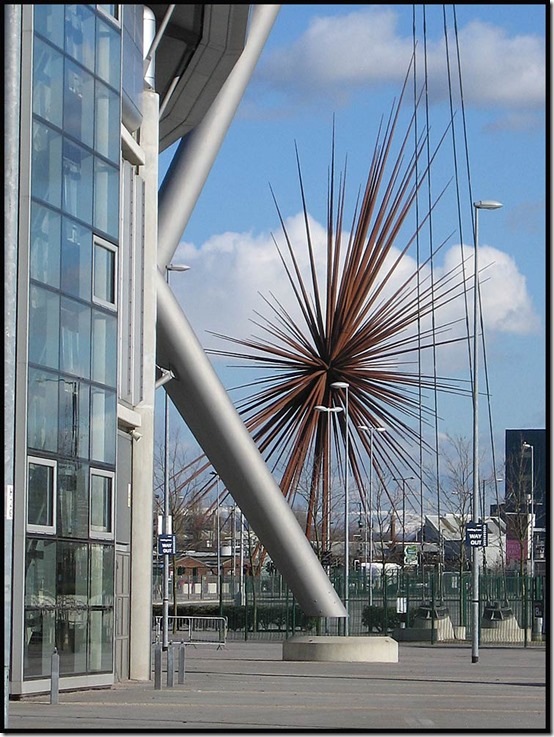 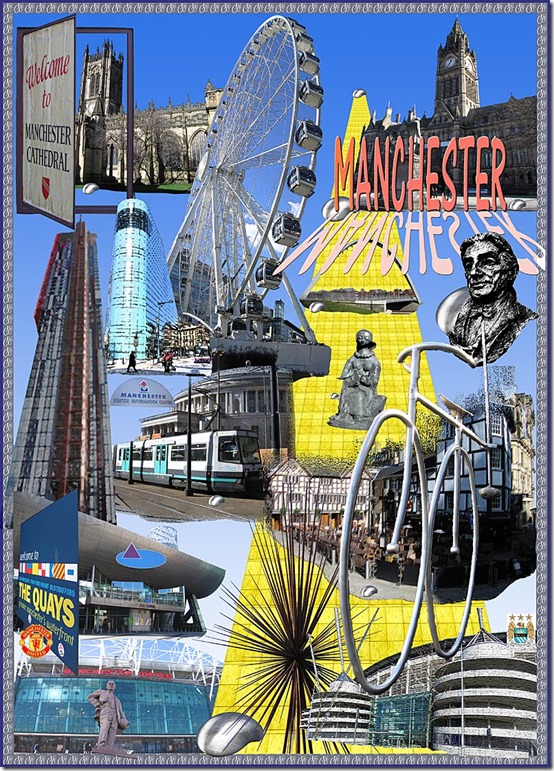 Regular viewers may have noticed a break in transmissions over the past week.  I should have been ‘processing’ our Pyrenees pictures before setting off today to Chamonix for a week in the Mont Blanc area.  Sadly that trip has been cancelled due to my inability to walk more than a few paces at a time.

All was well last Saturday, when I managed to jog around the 5 km Parkrun at Wythenshawe well inside 22 minutes.  Annoyingly, if I’d gone flat out I would have got a personal best.  Then, on Saturday evening, a lower back pain developed, slowly and painfully spreading down my left leg.  After two nights with minimal sleep, we spent Monday looking after young Jacob whilst his mum went back to work for a few days before starting maternity leave.  Well, Sue looked after Jacob whilst I writhed in agony on the floor.

A call to my doctor’s surgery triggered an immediate appointment.  I thought I might have sciatica, but the diagnosis was a back muscle strain with referred pain.  A cocktail of drugs was prescribed.  Co-Dydramol, Naproxen and Diazepan.  After 48 hours on this cocktail I was still unable to stand, sit or lie down without significant pain.  It was a bit like constantly having cramp, but being unable do anything to ‘release’ the cramped muscles and reduce the pain.

“We can’t have that” said the doctor, replacing Co-Dydramol with Tramadol, which is apparently a stronger pain killer.  Since then there has been a slow improvement, but complete rest is needed and the Chamonix trip was a non-starter.

This should give me time to make good progress with the Pyrenean pictures, slideshow, etc, though they haven’t been touched during the past week as I’ve been more or less totally incapacitated.  I have however been able to follow Humphrey’s progress across the Pyrenees on his journey from Etsaut to Bagnères-de-Luchon.  He is now back at home in Berwick, after enjoying an interesting trip and chatting to many locals affected by this year’s extreme weather.  Well done, Humphrey, and I very much appreciated your verbal report the other day.

I’ve also enjoyed tracking Markus, the Austrian TGO Challenger, on his own rehabilitation walk after a serious skiing mishap incurred last winter.  He has devised a circular walk from Inverness which he calls the ‘Wester Ross Trail’.  The route takes him to Drumnadrochit > Loch Affric > Strathcarron > Annat > Craig > Kerrysdale > Loch Maree > Poolewe > Fisherfield > Shenavall > Loch Fannich > Loch Meig, before returning to Inverness via Muir of Ord and Charlestown.  It looks an excellent route – about 340 km (210 miles) with 9000 metres ascent over twelve days, similar statistically to a typical TGO Challenge crossing.  He should currently be flogging his way through the Fisherfield Forest to Shenavall in fair weather.  Good luck, Markus.

Our week was brightened by an interlude in a Rusholme curry house with Rob and Brenda and their son, Douglas.  It’s many years since I saw these contemporaries from my days at UMIST, and they had never met Sue.  It was great to see them, and my pain seemed to diminish for the duration of that evening.  Thanks for getting in touch, R + B.

Whilst I’m laid up I hope to make occasional random postings, and I do have a date for some of your diaries.  Several of our younger correspondents have requested winter evening walks in addition to the traditional ascent of Shutlingsloe on 17 December.  So, on Friday 8 November, there will be a stroll up to the Pigeon Tower and Rivington Pike Tower from outside Rivington Visitor Centre - the Great House Barn on Rivington Lane at SD 628 138, starting at 7.30 pm.

Our latest ‘programme’ is here.  More details of the walk from Buxton on 6 October will be added soon, and as soon as I’m fit enough, I’ll be sorting out the venue for our Xmas lunch walk on 8 December.  In addition, anyone wishing to be included in our Collett’s booking in the Dolomites from about 12 to 20 July 2014 should contact me by email – martin@topwalks.com.  It’ll cost about £600 on a half board basis, plus travel costs etc.  It’s a brilliant venue, highly recommended, and as I’ll be celebrating my new status as an OAP I may just about be able to commit to a round of drinks!