Sue and I have been attending (and performing at) Stockport Walking & Outdoor Group’s evening talks for several years. From May to August, they abandon Hazel Grove Civic Centre in favour of local meadows for their Wednesday evening entertainment. Tonight was my first visit to one of these outings, which are somewhat better attended than our own evening walks.

Simone was leading her first walk. We started by filling the car park at the Arden Arms but not going inside! Then we left the pavement beside Stockport Road, in favour of a narrow path beside the River Tame. Simone skilfully led us towards a deep bog that she skipped across without revealing the ‘dry’ route. 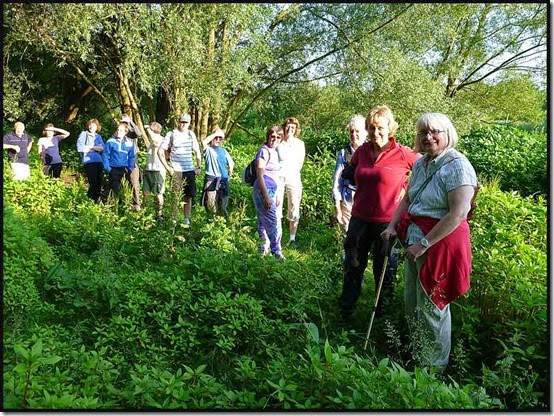 As folk slowly fumbled their way through the undergrowth, a tree decided to wreak havoc with Howard’s spectacles. It snatched them from his nose and flung them away. It took ages to find them! 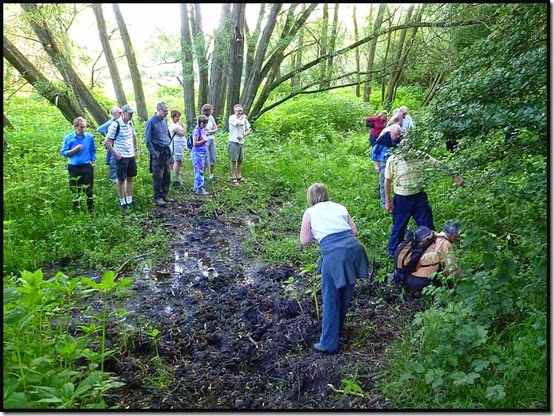 Soon we escaped from the bog and found ourselves in a spacious meadow full of docile horses. It was a lovely warm, sunny evening. 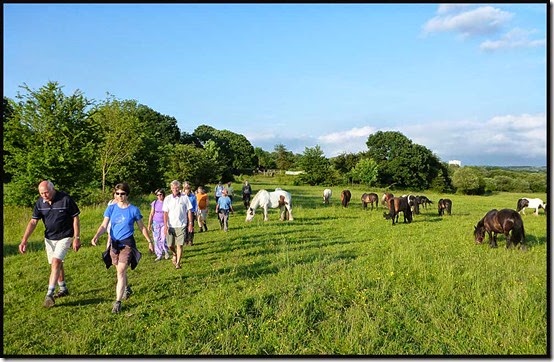 On reaching Reddish Vale Country Park, we admired this proud mother with her babies, and the mosaic outside the Visitor Centre. 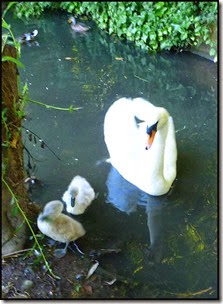 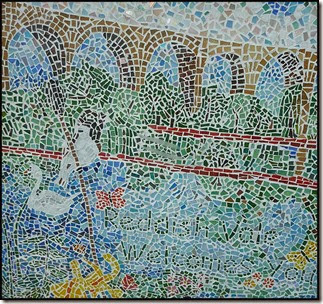 The lake and viaduct shone brightly in the late sun. 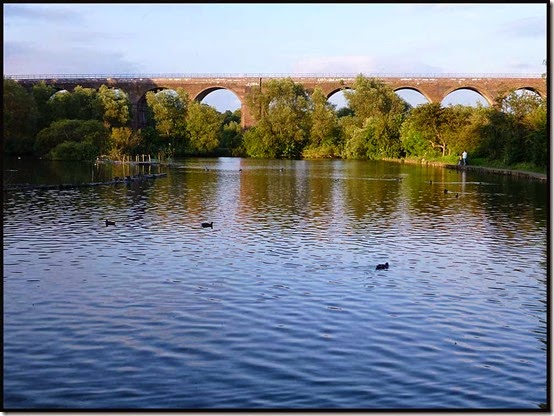 We met someone who had felt he was walking on a moving carpet. For us, we seemed to be walking on bits of moving debris. Why was this stuff moving? It turned out to be vast numbers of these little creatures. 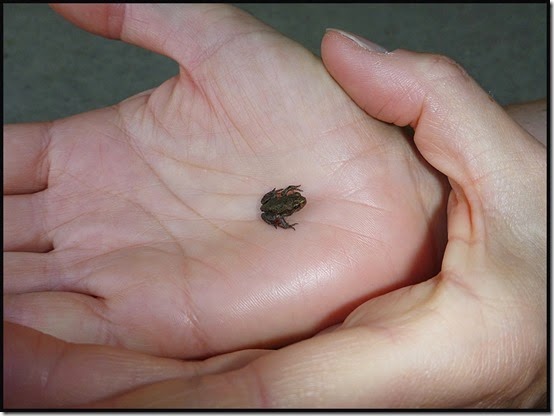 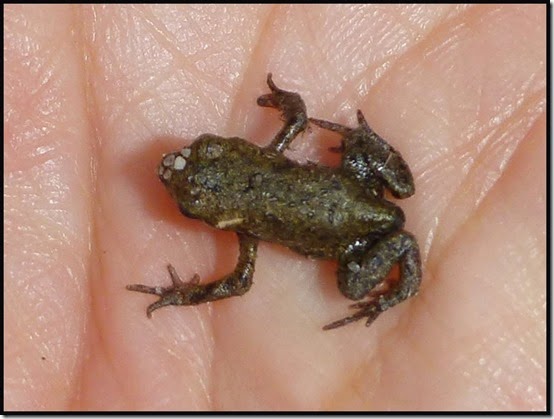 From the Visitor Centre we headed up to Hyde Hall along the Trans Pennine Trail, then back to our outward route and along the road to the pub, which had stayed open especially for us, not that it was particularly late! 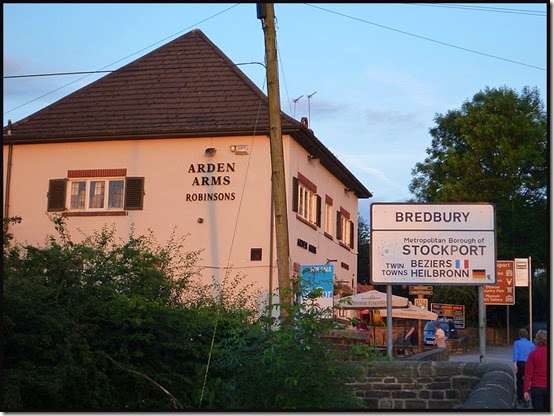 We enjoyed some of Robbie’s Best, whilst admiring a lovely Stockport sunset. 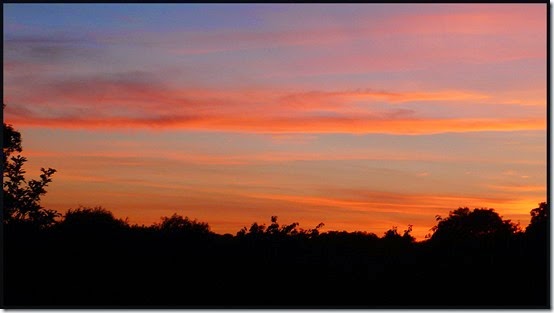 A most pleasurable first (second for Sue) evening outing with SWOG, with a special thanks to Simone and Howard for providing the entertainment. 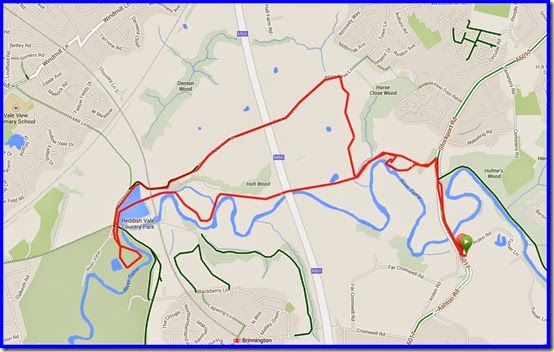 Posted by Phreerunner at 11:59 No comments:

‘A Pyrenean Adventure’ in New Zealand 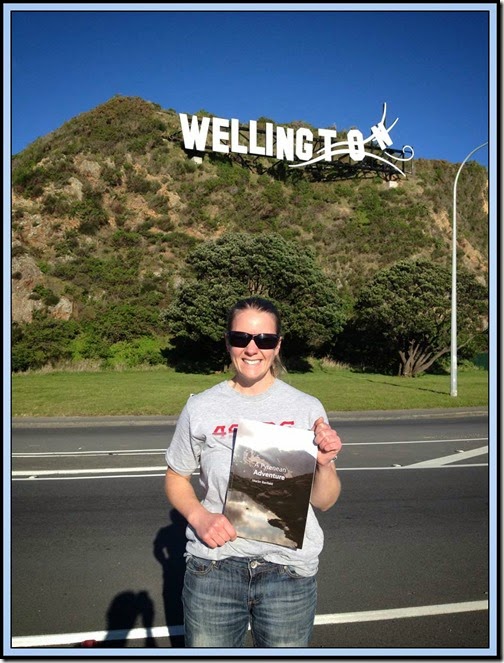 I’m indebted to my old friend Geoffrey for this picture of Ruth with ‘A Pyrenean Adventure’ in Wellington, New Zealand. This certainly gets the award for the best travelled copy of the book. There aren’t many left, and rather than advertise them for sale, I’m slowly disposing of them to people who ‘really want a copy’.

The whole experience of producing and distributing the book was so pleasurable that I’d like to do another one. You’ll be one of the first to receive a copy, Ruth.

Posted by Phreerunner at 09:19 No comments:

A Weekend with Grandma and Granddad 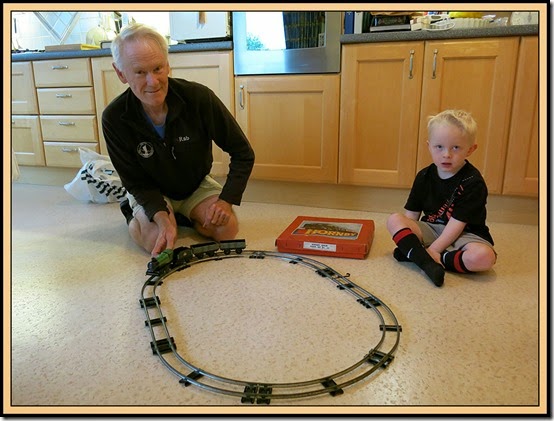 Hello, this is Jacob. I don’t think I have a Google account so I asked Granddad if he would write this report for me.

On Saturday Mummy and Daddy took me to Timperley, where Granddad found some old clockwork train sets. We found the keys to wind up the engines and put the track together. It was great fun watching the trains whizz around their tracks. Sometimes there were crashes.

The box for the set with the big green engine still had its price label - £2, 14 shillings and 7 pence. I have more money than that in my wallet, so I thought that sounded very cheap. Granddad told me that sixty years ago it was a lot of money. He said that in those days you could buy a house for a few hundred pounds, and a motor car cost almost as much as a house. Not many people had televisions, which were very small, with black and white screens. Granddad showed me an old payslip – in 1968 he earned just over £12 for 40 hours’ work. 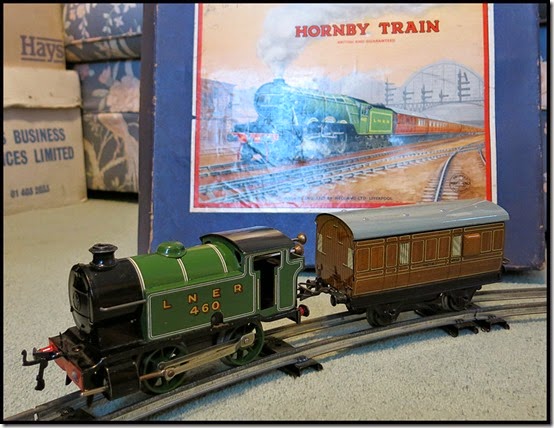 After playing with the trains, and with some newer (but still very old) Lego and Brio, I made some Jumbles biscuits for Daddy. It was Father’s Day, you know. 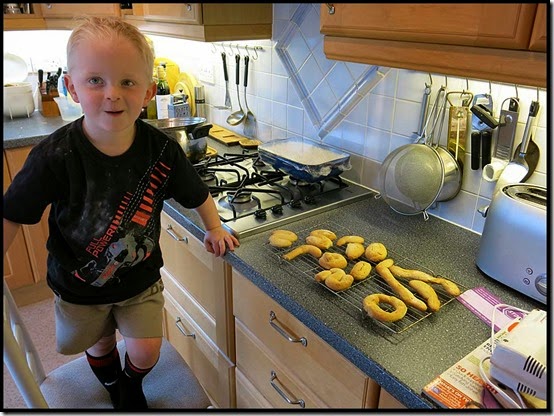 My hand got burnt taking the biscuits out of the oven, so I went out into the rain to cool it off. Granddad had put a tent up. He told me it was quite new, only about twenty five years old. That seems quite old to me! 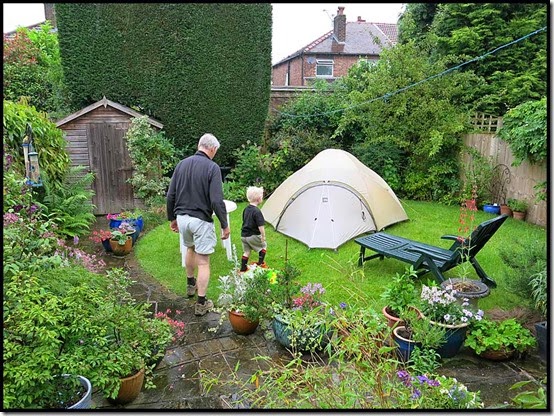 There was a duck pond in the garden that I tried hard to keep full of water with Fruitshoots recycled through my body. 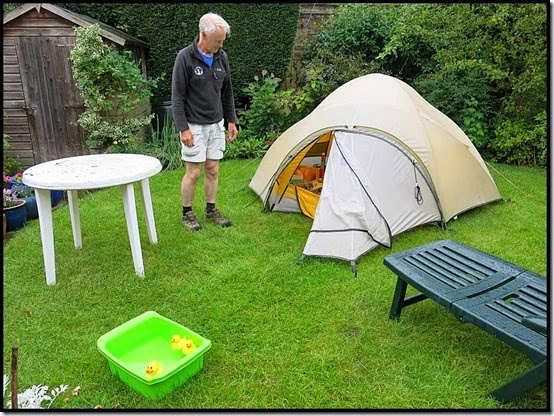 Gotcha – I was in the tent. It was very cosy inside. I pretended to be a lion. I know there are no lions in Timperley, nothing to be afraid of, because the mouse in Grandma and Granddad’s garden has frightened all the lions away. 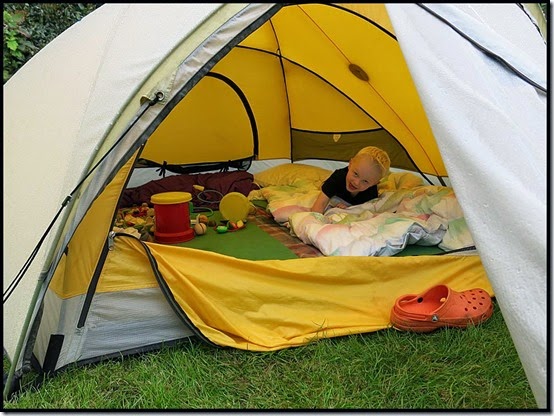 Then we made some sandwiches and went to Tatton Park for lunch. I didn’t eat my sandwiches, but I did enjoy a massive banana that filled my tummy. It fitted very neatly above all the biscuits.

There was a children’s playground next to the picnic bench. 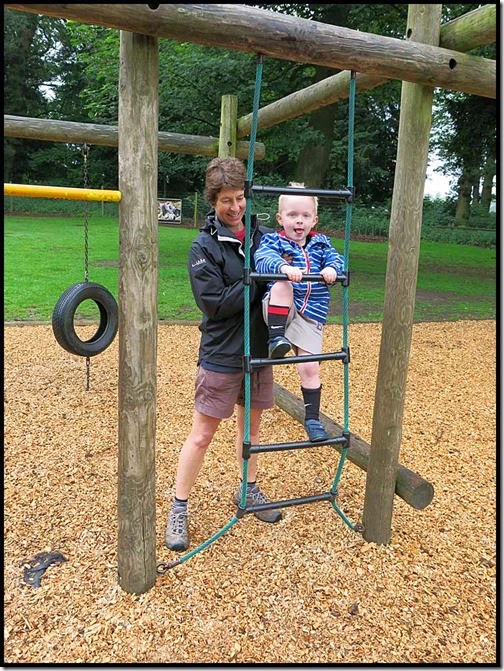 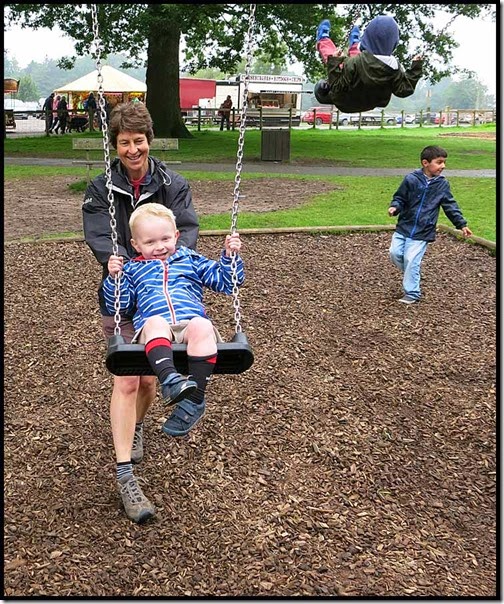 Somebody glued my bottom to the slide. 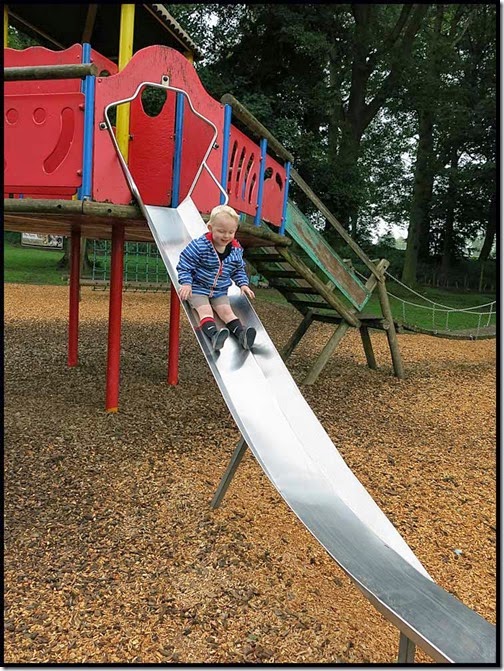 At Tatton we went to a farm. It wasn’t far away – I went on my bike. There were chicks and piglets and lambs and goats and reindeer and lots of other animals. I fell over and grazed my knees. I found a room full of tractors and a fire engine. I tried driving them all. 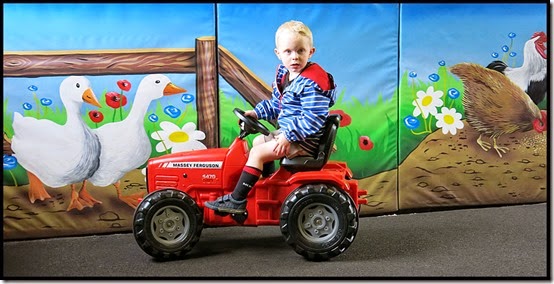 That made me very tired, and my knees hurt, so Grandma took me on a journey. 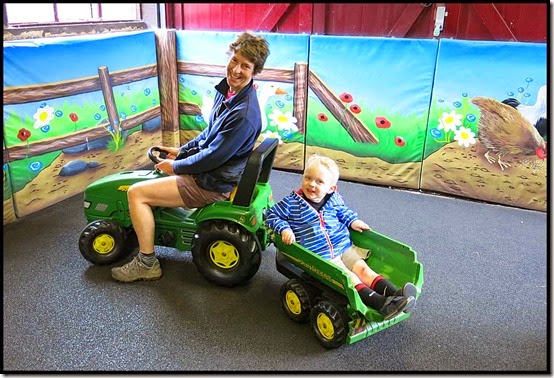 We washed my knees and found a giant plaster and some more places to play. Then I cycled back to the children’s playground. I can ride a bike properly now. I am three, you know. 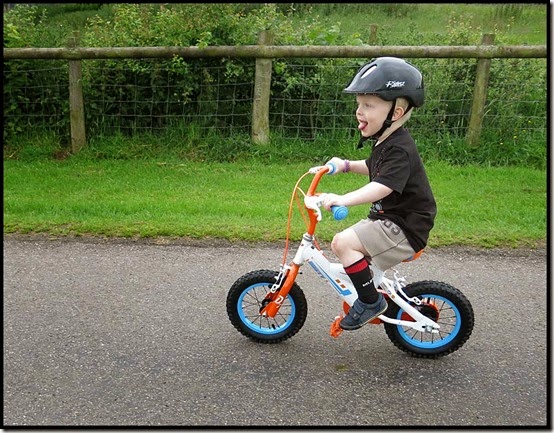 My final treat of the day was a ride in my hero, Lightning Mcqueen. We won the race, of course, with some very clever swervy driving. 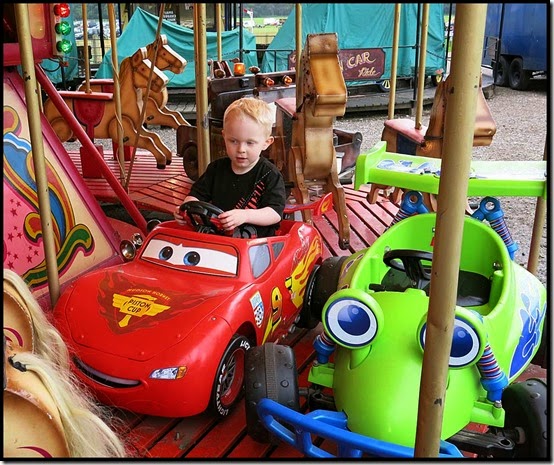 Then Grandma took me home. I think Granddad had to stay in Timperley to cook tea for Grandma and Uncle Mike.

Grandma took a few video films – here they are if you are interested.