TGO Challenge 2015 - Getting to the Start 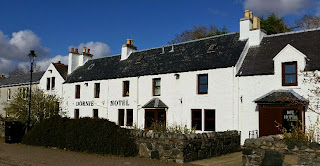 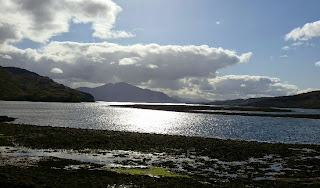 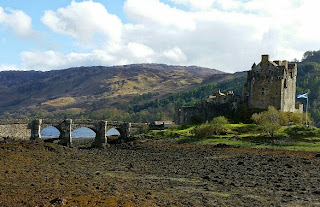 Five am. Just as well Sue's alarm went off as I'd set mine for the wrong day.

My second mistake was forgetting to bring my Senior Railcard. Not too many more 'Senior Moments' on this trip, I hope.

(In the event all today's conductors were very kind.)

It was too early for trams, so a taxi to Piccadilly got us onto the 6.14 Trans Pennine Express to Edinburgh. A lovely sunny day slowly revealed itself on this beautifully scenic route through the Southern Uplands. Then a commuter train took us over the Firth of Forth, where a new bridge is under construction, and on next to a snoring Scotsman to Perth, where we picked up the ScotRail service to Inverness, arriving there by 1.30 pm. Timperley to Inverness in a morning - not bad going.

It's election day, though you couldn't guess that.

No evidence of any Challengers, either, before Perth. Then David Wishart appeared, plus a number of both stalwarts and unknown faces, with Jamie and Emma in the former group.

It's another lovely journey over Drumochter, beyond where a violent shower reminded us that the weather can be changeable in these parts. Outside, on the station platforms, a cold wind emphasised that we had moved somewhat north of Timperley.

The Kyle train was waiting for us in Inverness, and for the onward journey the weather stayed fair and the countryside fairer as we trundled across to the west coast and a final short but inordinately expensive* bus ride to reach our destination by about 4.45 pm.

That gives us plenty of time to enjoy a sociable pre-challenge evening with the election continuing in a parallel universe.

I've just nipped out to admire the views and take a few snaps - from top to bottom, our hotel, Loch Alsh and Eilean Donan castle.

* almost £1 a mile, whereas the cost of our two tickets from Manchester to Kyle totalled £84.

There's a short slideshow for the day (10 images) - here. Click on the first image, then click 'slideshow'. 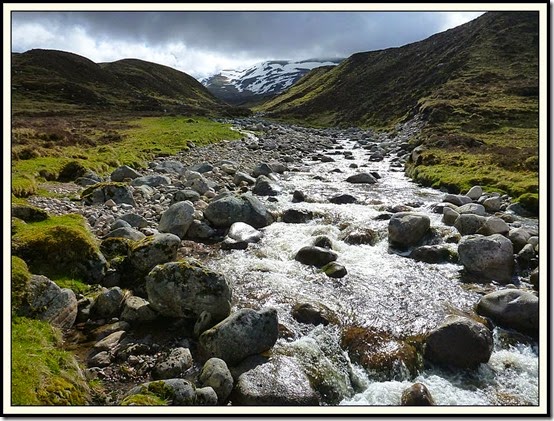 I broadcast the route that Sue and I are planning, back in January (here).

The route was vetted by Roger Smith and didn’t need any adjustments, though I anticipate some of the Foul Weather Alternatives being deployed.

Our rucksacks are loaded. Mine maxes out at about 15 kilos at its heaviest. Sue gets away with a little over 8 kilos, but it is the first serious backpack she’s done since her neck muscle problems that started in 2009.

It’s our easiest route to date, just about 200 miles, so hopefully we’ll make it across without too much trouble.

I’ll be blogging every day, as usual, and I’ve just composed a web page with our route details, here. It’s an awful layout, I know, but until I get some new web design software it’ll have to do. Apologies for any glitches.

Our kit list is appended, in no particular order, to the bottom of the web page, should any geeks be watching.

Our train to Kyle of Lochalsh, via Edinburgh, Perth and Inverness, leaves Manchester Piccadilly at 6.15 in the morning, so it’s an early start!

I hope we get some weather like the sunny day I enjoyed last year on Creag Meagaidh, pictured above from the burn above Dog Falls.

A Bank Holiday Weekend ‘In Timperley’ 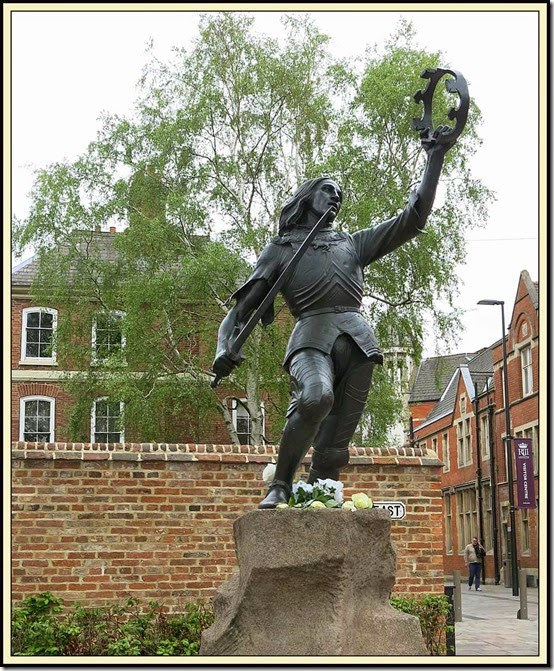 Our Bank Holiday weekend started with a jog in the park for Sue, whilst I marshalled on the first corner. It’s ‘not a race’, but here are Matteo and Richard – regular ‘top ten’ finishers in around 20 minutes for the 5km run. They were clearly not racing (until Richard tripped Matteo on the finishing straight!).

(My dream is to complete just one kilometre in less than 4 minutes!). 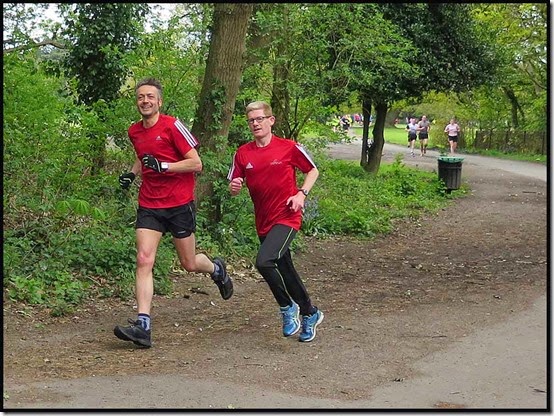 Conditions were dry and fast, with Dan leading the pack around the first lap in decisive manner. Second time around, this 15-17 year old faltered slightly, but Gary needed to equal his PB to shade the youngster on the line. Both recorded 18.20, a time outside most of our reaches. 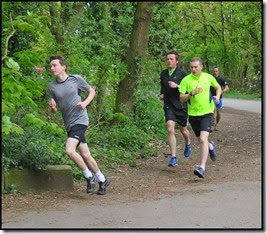 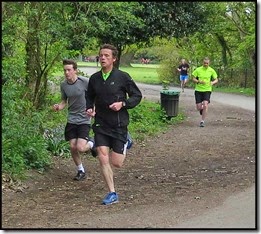 After Sue had regained her breath and I had trotted around one lap with tail runner Anthony, and we’d all sympathised with Paul, who had pulled out after one lap with a sore achilles tendon, coffee was taken in the cafe before Sue and I headed to the fleshpots of Leicester. 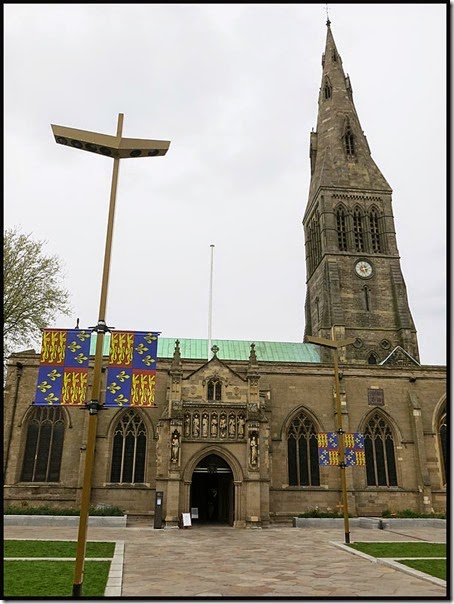 Above is a church that maybe used to be in a backwater, but thanks to Richard III is now on the tourist map.

There’s a very informative exhibition that offers everything you need to know about Richard, his life, and his discovery over 500 years later in the spot where a projected light imitates his bones through the glass floor of the exhibition hall. Can you spot the curved spine – he had scoliosis. 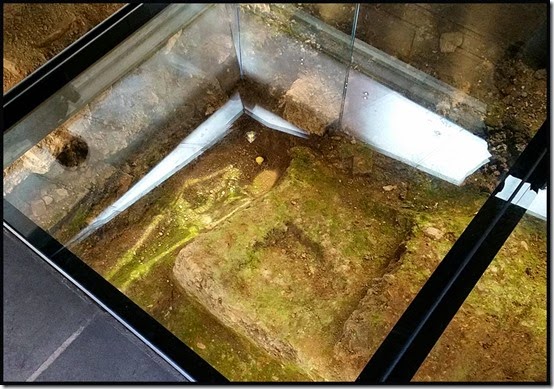 Our genial hosts were Sue’s brother and his wife, who put us up in grand style and took us on a short stroll around Bradgate Park on Sunday morning. Thanks Paddy and Kate. 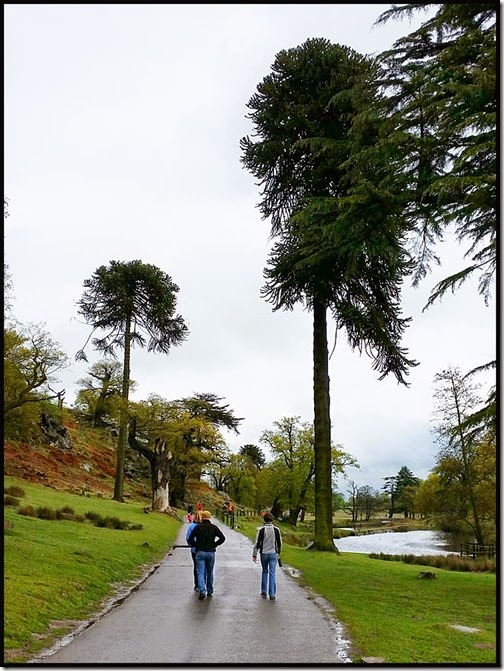 The park is set in lovely countryside, and lots of folk were setting off on longer hikes than our 5km amble. We examined the remains of Bradgate House, famous for being the home of Lady Jane Grey in the early 1500s. 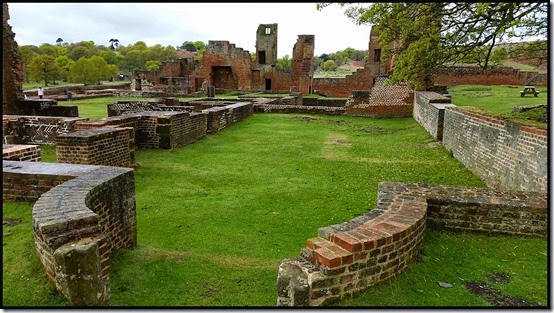 Then it was back to Manchester to pick up Jacob from his ‘Grandma Whoosh’. After an active day the four year old was asleep soon after 9pm, but awake from 2.20 to 3.40 and then from 5.27am, according to Sue.

Meanwhile I researched a route for parkrunner Richard. He has to plan a walk for some novices, from Coruisk to Glenbrittle, on Skye. Having looked at the map, and re-read Ralph Storer’s excellent route descriptions in his book – ‘Skye – Walking, Scrambling and Exploring’ – I have decided not to try to plot a route on the map below, for fear it might be held against me a some point in the future. 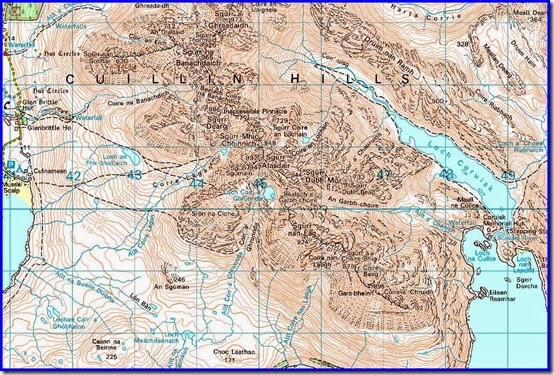 Would Richard be wiser to take his novices along the easier path from Coruisk to Sligachan, I wonder?

Anyway, we enjoyed a pleasant morning with Jacob, who is learning to slide down the pole in the park. 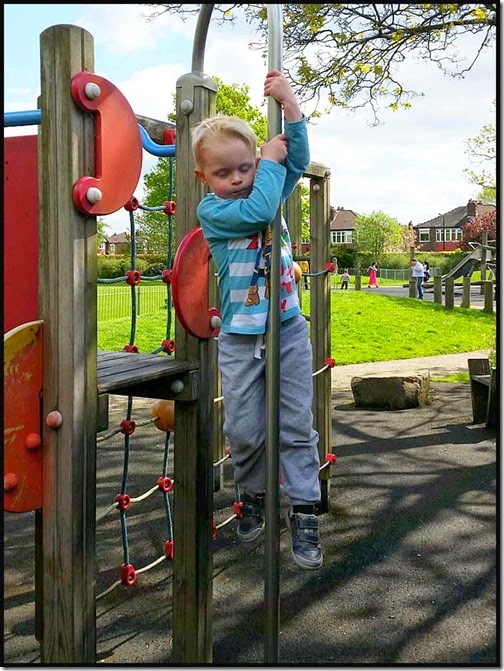 Leaving Sue to mow the lawns, I enjoyed the afternoon with Jacob and his dad, a couple of cousins, and another grandad, at the stock car racing at Belle Vue. 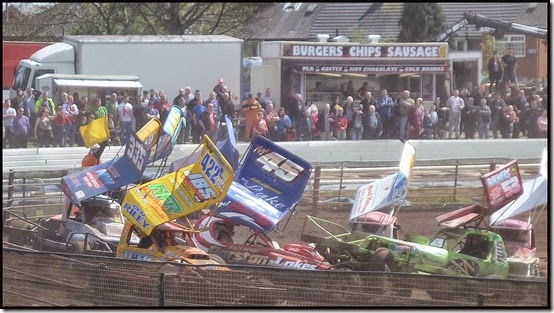 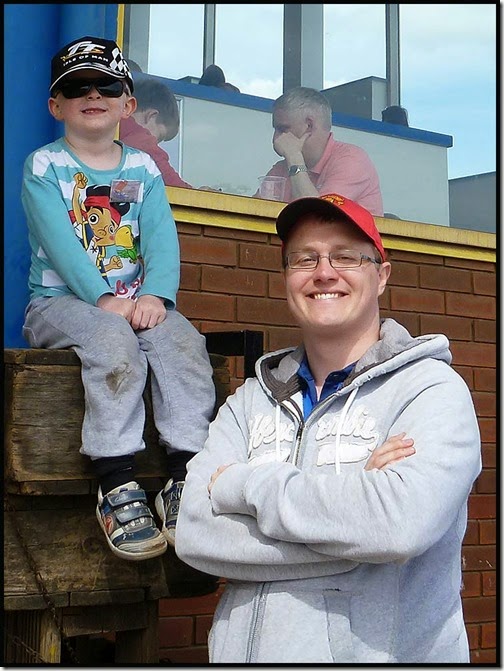 The juniors race in well protected minis like this one. Girls seem to be better at it than boys. 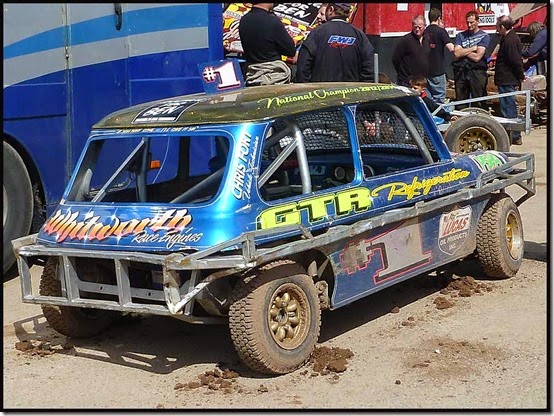 Grown ups are sponsored mainly by scrap metal merchants (there’s a message there). Actually the cars are big brutes and very quick around the oval course that’s also used for speedway and for dog racing. 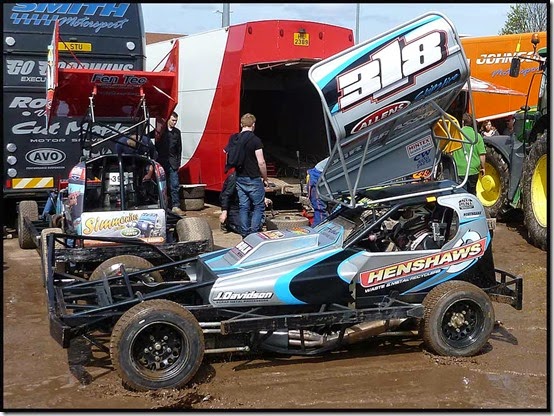 There are also races for saloon cars that have been rescued from scrapyards. 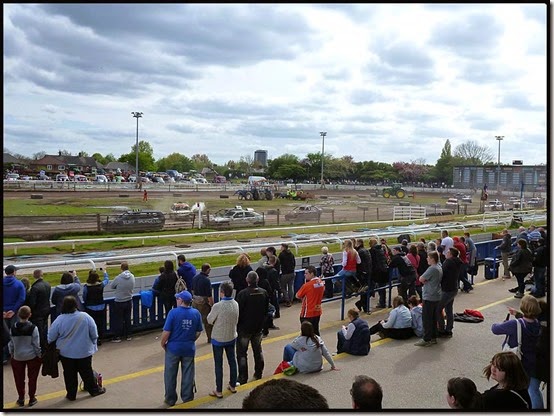 The ‘Formula 1’ (3 litre) and ‘Formula 2’ (1.6 litre) cars all have huge aerofoil wings. It would be interesting to see how they would perform in a clockwise direction around the circuit… 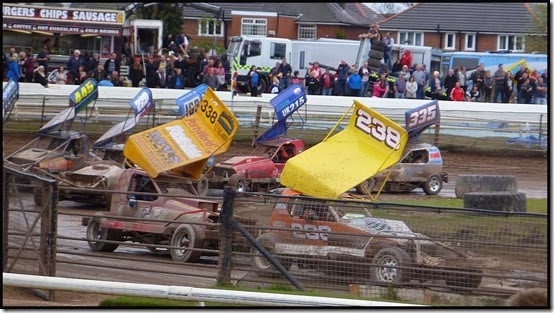 The afternoon was good value, with 18 races, culminating with a caravan race that was effectively a destruction derby. I took a video, but readers may be thankful to learn that I’ve been unable to transfer it from the SD card or wherever the Panasonic camera on which it was taken happens to have mysteriously stored it! (There are some more photos here, though.) 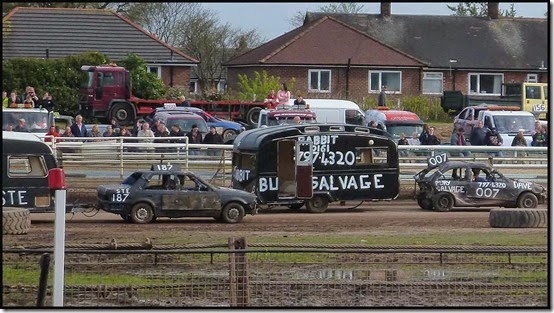 Then I did a Jacob impression of a full length dive on the pavement, rushing to collect his stuff from my car. Ouch. It was a quiet evening at home.

(I caught up with my blog reading, but apologise for not making any comments – there just wasn’t time, and I need to try to get organised for the next trip…)