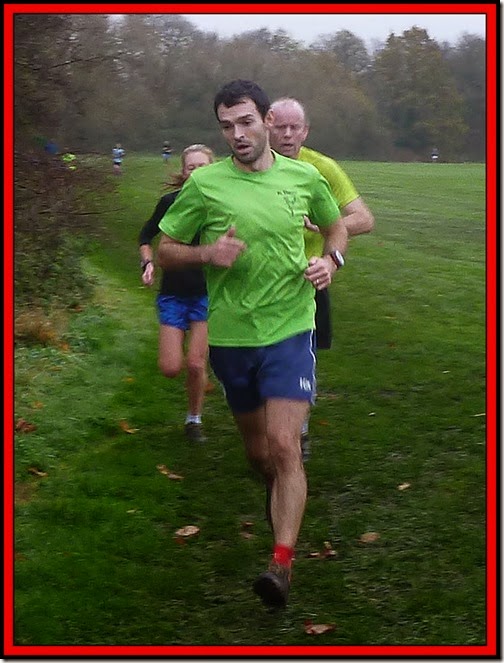 I enjoyed marshalling at “the far bridge” this morning, trying to encourage 216 runners around Wythenshawe Park’s two-lap Parkrun circuit on a warm, muddy morning. The bridge is 900 metres from the start/finish line and it’s very peaceful sitting on the railings waiting for the runners, whilst being entertained by squabbling gulls and foraging jays, not to mention my attempts to convert passing dog walkers into Parkrunners.

The two winners, Allan and Diane – pictured above with third place Roger – even managed a third lap, resulting in puzzled looks from folk who found themselves lapped twice on the two lap course.

I took lots of photos with a camera not really designed for the purpose, so most of my subjects appear as speedy blurs on the dull day, even if they were walking. Anyway, I hope they appreciate that I’ve tried to show them in a ‘fast’ light. The results are here. If you aren’t familiar with ‘Parkrun’, Wythenshawe’s home page is here.

My Picasa album is here, and I’ve also tried to put them in the Parkrun Flickr album, but I’ve struggled with that on a number of fronts – even though I sign in as me, the photos appear to emanate from Sue (who wasn’t there today), and … well, I can’t find the captions or play a slideshow. Perhaps you can!

To view the Picasa album, click on the first image and then click ‘slideshow’ – even I can do that.

It’s a great way to start the weekend – see you all again soon.

PS – do let me know if you are not happy with any of these images being made public, and I’ll delete them from the album (email: martin@topwalks.com) 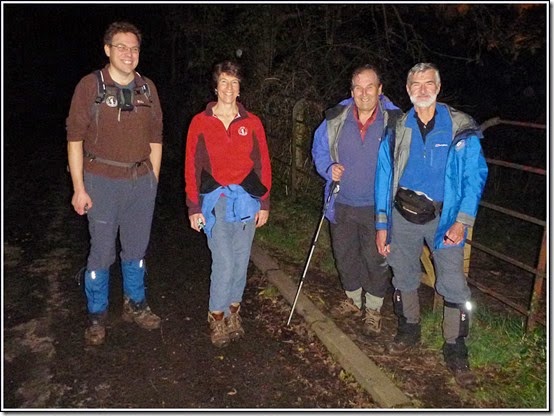 Last night a small group of stalwarts assembled in the friendly surroundings of the Ship Inn, Styal, for a short perambulation. Alistair and Sue were clothed as if for a summer evening stroll. The rest of us were too hot in the heat of the November evening.

Why the ‘Ship’? you might ask. The pub actually dates back around 350 years (that’s 120 years before the nearby mill was built) and was once known as the ‘Shippon’, a farm building used to store manure, but became the Ship Inn when the farmer who owned it started brewing for the local people. It’s now known for its much sweeter smelling 260 year old wisteria and the beautiful roses that grow up the front of the building.

A short stroll past some old cottages brings you/us to Styal Cross, about which the following plaque provides a brief history. It’s a good place from which to start a variety of walks, as is Twinnies Bridge on the road to Wilmslow. 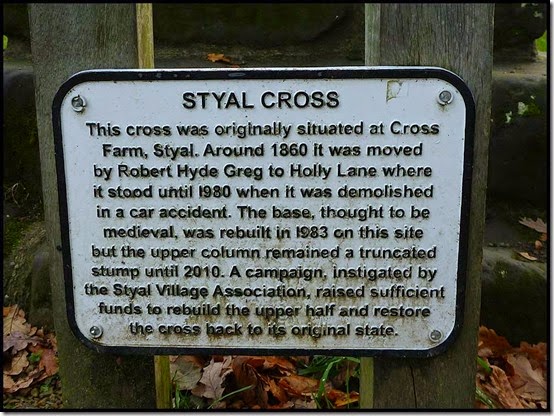 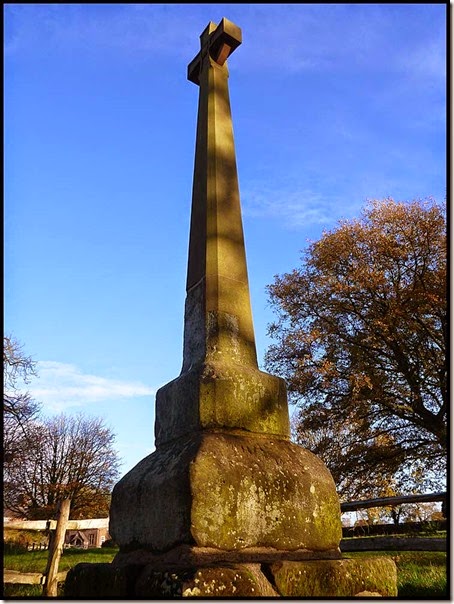 Heading towards the chapel, after a few metres a good path slopes off left into Styal’s northern woods. 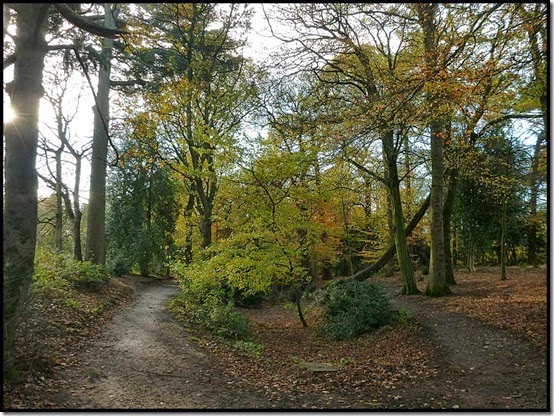 There are lots of different ways through the woods on a network of paths. We chose to cross a side valley by a newish metal bridge, before reaching Chapel Bridge and another side valley. 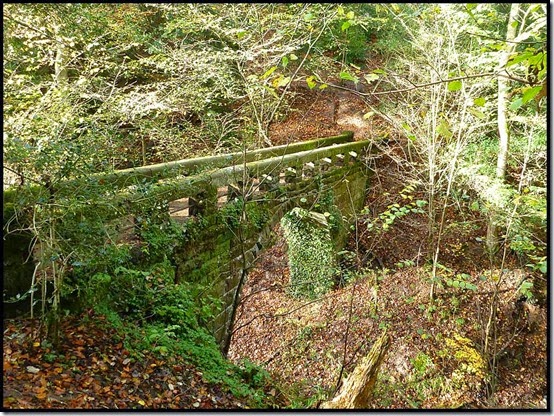 This is of course a walk down the Bollin Valley. Badgers can be seen hereabouts, but the intensity of Andrew’s floodlight must have warned them of our presence. 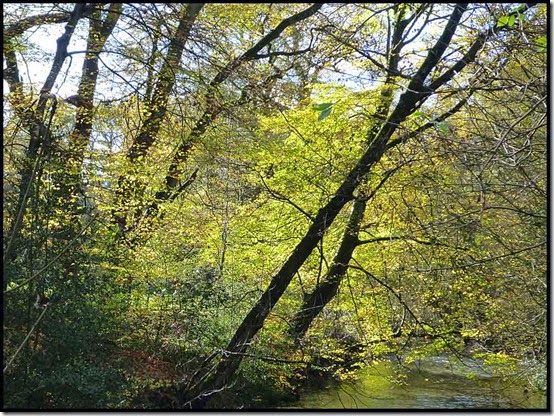 It’s an area of well maintained paths with a thick bed of beech leaf litter – thankfully the only litter spotted today. 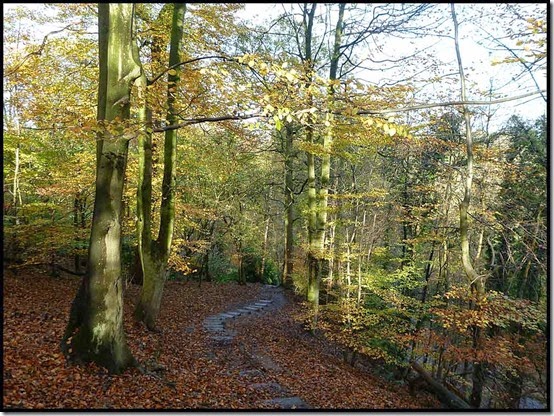 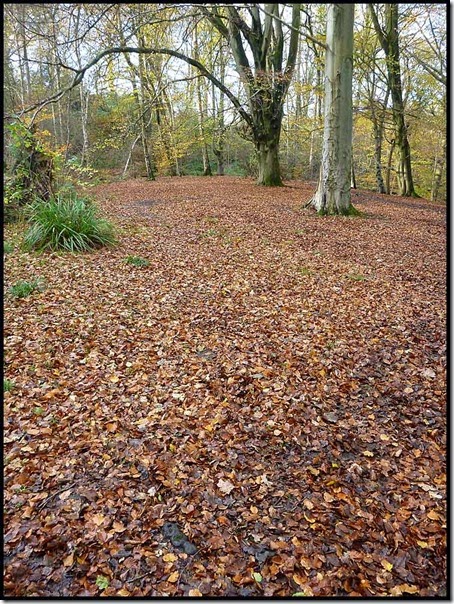 After an encounter with Oxbow Bridge, and a few up and down steps, we eventually crossed to the north side of the river at Giants Castle Bridge, where Jim Krawiecki was spotted kayaking his way towards the Atlantic Ocean.

(Jim will be returning from this adventure to give an enthralling talk at Hazel Grove Civic Centre next Wednesday evening at 8 pm.) Details here. 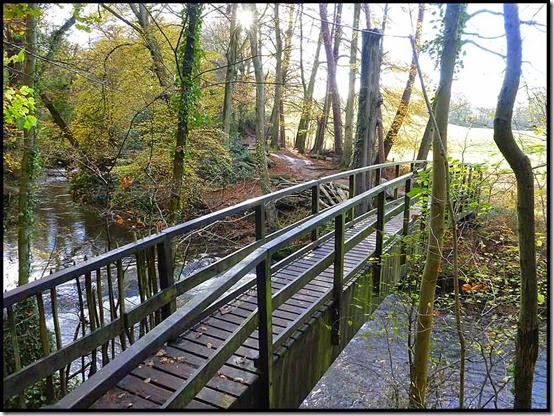 Beyond the Airport Inn, where we finally emerged from the woods, a short walk up the A538 road leads to a field path to the hamlet of Morley, where a lone Lesser Periwinkle (Vinca minor), which my flower book says flowers between February and May, seemed to have been refreshed by a pile of windfall apples. 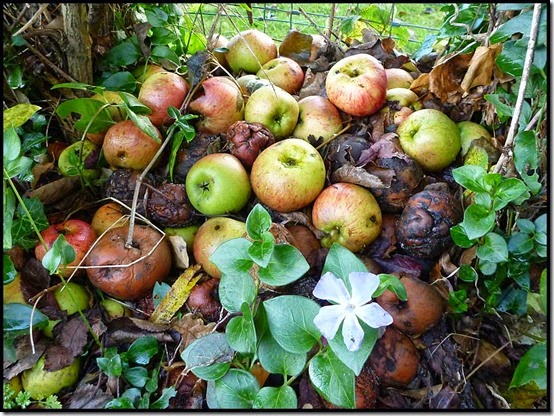 After Morley, a thin path led across a newly sown field which bears memory of a thin path between a huge sweetcorn (or was it sugar beet? or cannabis?) crop, to a stile which introduced us to the beady eyes of a bull named Quantas. 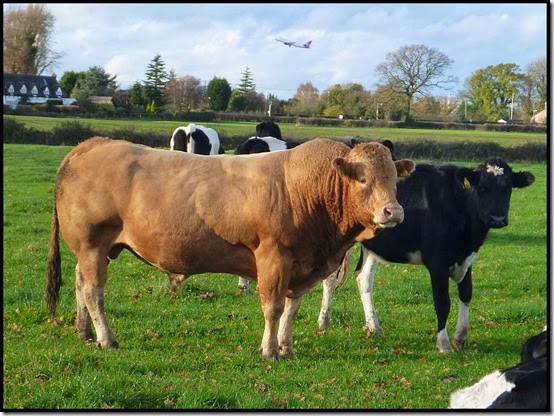 After hastily falling over the stile at the edge of Quantas’s domain, we meandered back to the A538 and to the turn to Bank House Farm, which we noticed is up for sale. Perhaps after many years of having to put up with the farm’s moat of mud, walkers may in the future be able to reap the benefits of a drier area that hopefully the new owners will maybe prefer for their own sake.

Beyond the farm, the path improves again as it makes its way down to Quarry Bank Mill. There are good views down to the woods near Oxbow Bridge. 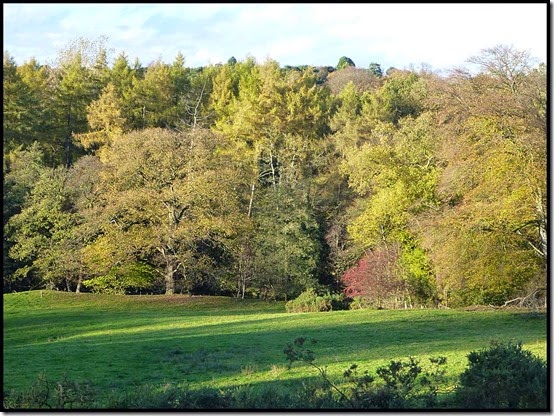 Following the loss of my Merrell Moab GTX shoes in Madeira – they fell apart after 1200 km – my old Keen Targhee II shoes have been brought back into use having long ago been retired to mountain biking duties after 1750 km of use on the hills. [Keen 2 – Merrell 1] 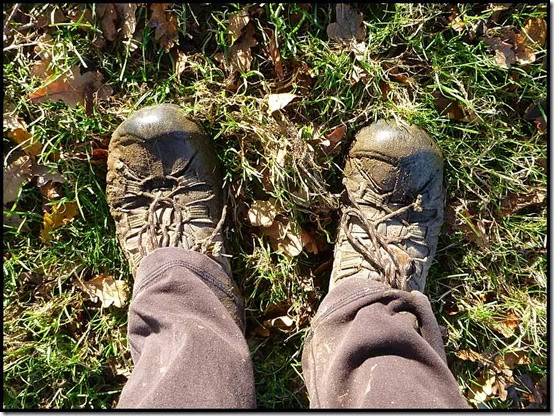 Walkers on this route may relax at the prospect of ‘no more mud’ when they reach this view of Quarry Bank Mill, the splendid cotton factory founded by Samuel Greg in 1784. 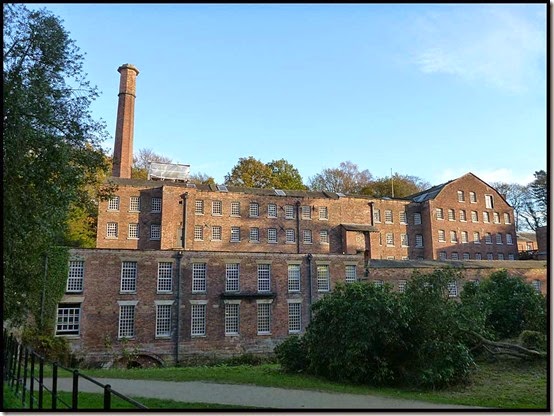 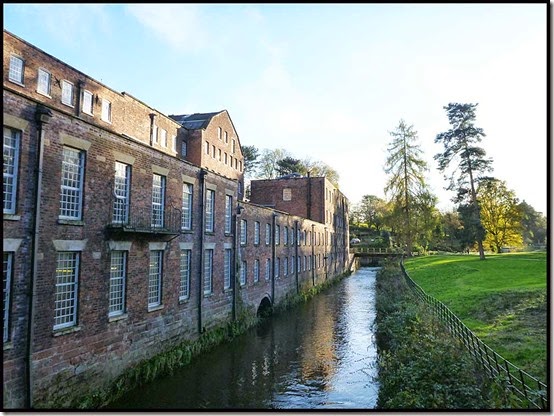 A short way up the road, a left turn takes the walker directly back to Styal Cross, and on to the fleshpots of Styal. 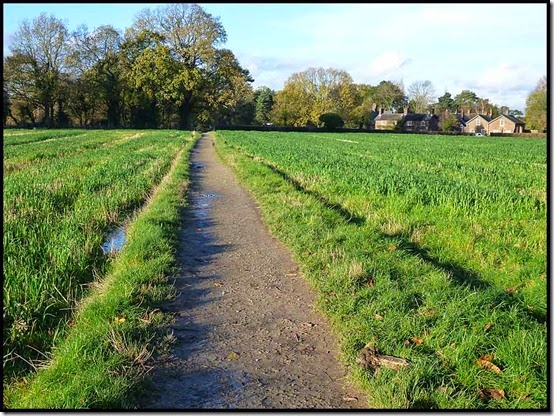 Sue and Andrew, having not got enough exercise, decided to take the long route back, but the rest of us followed the route shown below – approximately 7 km with 150 metres ascent. It took us a very leisurely hour and fifty minutes. 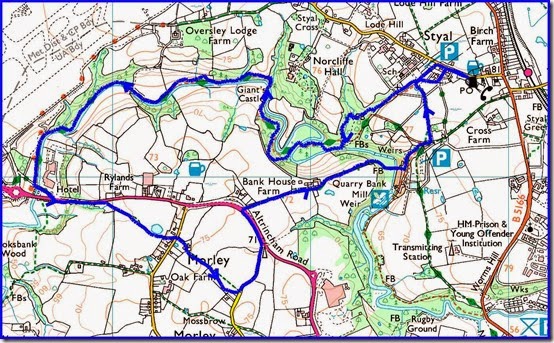 Our next (and only planned at present, so suggestions for next year would be welcome) evening walk is our annual 5 km yomp, starting at 7.30pm from Trentabank car park (SJ 960 711), adjourning for Christmas Ale at the Leather's Smithy in Langley. All are welcome.

PS Are you impressed with my trial of the Lumix special infra-red lens software that brings daylight to moonlit images?

Posted by Phreerunner at 12:33 No comments: 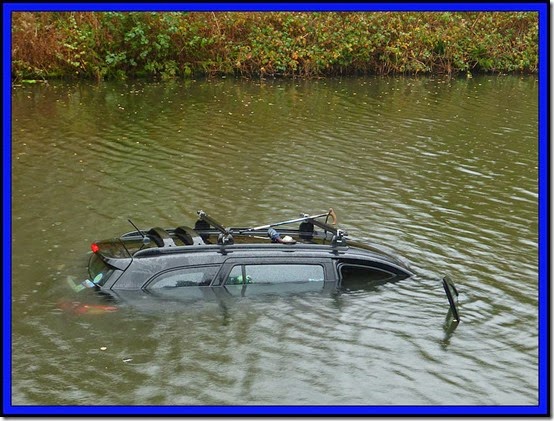 Well, we had an uneventful journey back from Madeira on Monday afternoon, and this week is flying past in a blur of domestic chores.

I have escaped on my bike a couple of times, and this is Tuesday’s view on the Bridgewater Canal. A rare such sighting, thankfully, and even rarer to see an umbrella and a walking pole on the roof of a decent looking car in the canal.

Timperley residents can breathe a sigh of relief as they will note from the picture below that the incident took place near the animal rescue centre in Stretford. 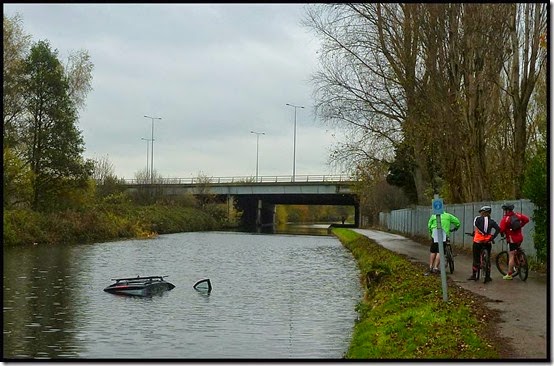 The vehicle was quickly removed, there being no sign of it today.

Posted by Phreerunner at 16:09 No comments: 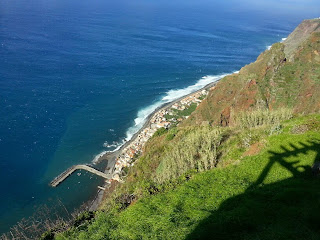 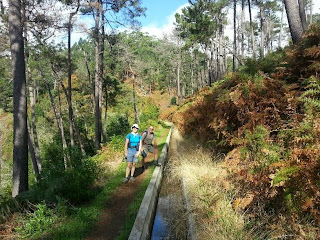 A great day out on Walk 49 in our 3rd edition Rother guide.
The descent from Prazeres to the fishing village of Paul do Mar was 500 metres down a lovingly restored classic cobbled path in a vertiginous valley.
Whiffs of rain occasionally splattered us from cloud clinging to the centre of the island, but we remained in sunshine.
A grey wagtail led us to easier ground, past a naked gentlemen leering towards the Americas, and to welcome refreshments from the Bar dos Pescadores. Then a walk between houses that reminded us of Staithes led to a blustery seafront where the spray from crashing waves mixed with the rain coming seemingly from an empty sky. Expert windsurfers demonstrated their skills.
It was a 640 metre climb up to the Levada Nova, which isn't all that new as it dates from before 1953. It's lined with concrete rather than the more familiar stone, so it does actually look new.
Another lovely paved path took us up to the levada, half way up which we paused for lunch at a viewpoint where an old wheel remains from a conveyor belt system for moving goods. Prickly pears provided the foreground for photos back to Paul do Mar, which is pictured above from near the start of the walk at Hotel Jardim Atlantico, which also sports fine views towards the Statue of Liberty.
We met a few folk today, including a couple of large guided tours on the levada. Also in evidence were some very chatty charms of golfinches. Kestrels and buzzards were in attendance. Swifts, lizards and dragonflies made guest appearances - the lizards in particular were waiting for the first chance to hoover up our lunch crumbs.
The 8 km or so of levada walking was an absolute delight. The Levada Nova enjoys an open aspect with good sea views. The only downside was that I arrived back at Whitey rather battered with a grazed knee and no shoes. Never mind, the soles of my Merrell shoes had after all parted company with the uppers. My claim to have been mugged was treated with the derision it deserved.
Luckily, we returned to Funchal after this 19 km stroll (in a little over six hours) to find our fridges full of beer. It being our last night, that situation had to be remedied.
Next stop - Timperley.
Posted by Phreerunner at 22:36 No comments: