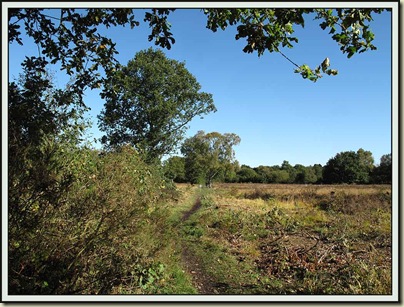 The evening walks that Sue and I so conscientiously plan do have a tendency to creep up on us.

It’s a couple of years since we did this particular walk, so I’d forgotten the route.  I’d forgotten that we had done it before!  A recce was in order, as I had no desire to get misplaced on Lindow Moss.

So, in the morning I set off on what I quickly realised was a familiar circuit.  It was a lovely autumn day – I envied the friends who were spending a day in the Lake District, but I was pleased to be out in the fresh air, feeling reasonably healthy.

The hour passed quickly despite frequent pauses for snapshots.

The last time I walked this route in daylight was on 11 November 2008 – I wrote about it here – on another sunny day, but autumn was decidedly more advanced on that occasion.

Recce done, I went home for lunch, then after tea I dragged Sue, exhausted from a hard day at the soon to be culled labour camp, back to the Boddington Arms, where fellow TGO Challenger Graham Brookes was lying in wait over a half of bitter.  A text message provided the excuse from another regular “safely back in Kat, back home Sun, in time to see City thrash Ars”, whilst others had called in “too tired”.

So the three of us enjoyed a moonlit stroll around the same 3 mile circuit.  It’s different at night.  There are fewer dog walkers.  Black Lake really is pretty black.  Tawny Owls are quite vociferous with their ‘tuwit, tuwoo’ calls.  Wood Pigeons clatter noisily from branch to branch.  A few stars are visible, despite the ambient light and the bright moon, with the ‘plough’ being easily identified. The puddles that are easily avoided in daylight become man traps.

Having already reported twice on this walk, and having provided various references to both the route description and the ‘The Bodies in the Bog’ (Lindow Man), I’ll leave you now with just a few images from the morning’s stroll under a cold blue sky.

A path from the car park by the main road, next to the Boddington Arms, leads directly onto Lindow Common. Paths criss-cross the common, but we make a bee line for Black Lake, where mallards rule the roost today. 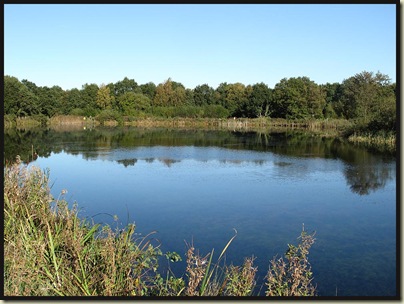 Leaving the Common, after crossing Racecourse Road and bounding down Lindow Lane, we turn left down Rotherwood Road. 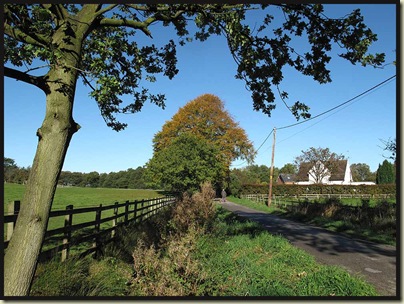 Doubling back along Moor Lane, roses grace the hedgerow, even in mid-October. 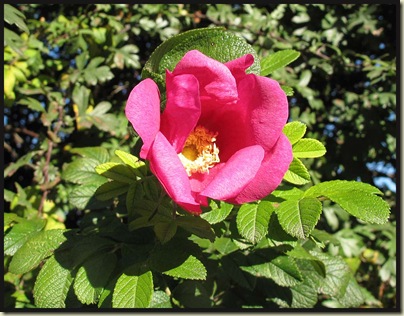 A carrion crow lurks above, eagerly scanning the scene for titbits. 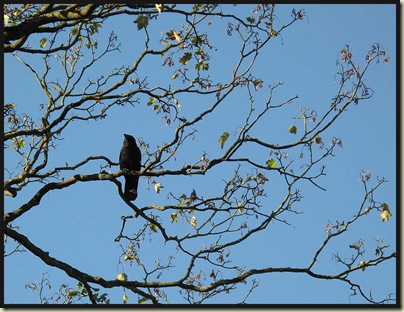 The tarmac ends, and a field path leads past mole hills and through a kissing gate to another world. 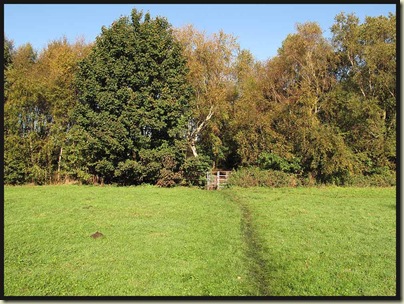 It’s the peat bog – Lindow Moss.  Peat is cut here for domestic garden use.  This scene from the raised pathway through the Moss shows where Lindow Woman and Lindow Man (the Bodies in the Bog) were found in 1983. After only about ten minutes, a footbridge provides means of release from the unexpected landscape, back onto a country lane and past an old sandpit that is now a giant aquarium (Rossmere Lake). 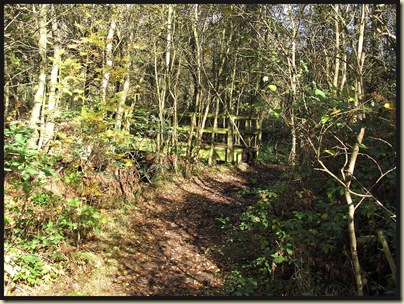 Newgate Lane now leads gently back to Lindow Common and the car park, to conclude this gentle outing. 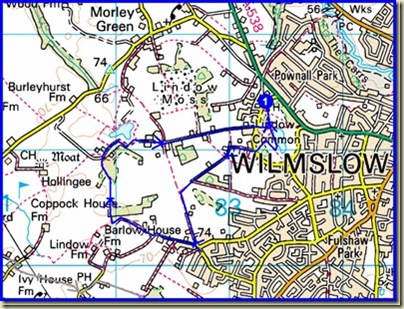 Posted by Phreerunner at 09:54 No comments: 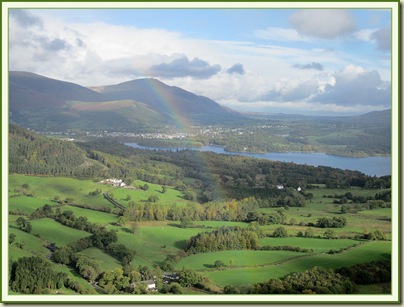 By way of a change, I set off alone at 10 am this morning, on this meander around Coledale.

Well, I was walking alone, but there were plenty of people to chat to – I must have seen getting on for 100 folk on these hills today.

Luckily, the weather had improved as I headed north up the M6, though as I set off from the parking place in the old quarry by the side of the Whinlatter Pass road (NY 227 237) a brief shower summoned the waterproofs for the first time for a while.

I was soon up Kinn, and reached the top of the pyramid known as Grisedale Pike in good time.  It was swathed in light cloud right on the summit, whereas Skiddaw was pretty much engulfed in cloud until mid afternoon.

After negotiating the bump of Hobcarton Head I strayed from the purist’s route around Coledale to take in Hopegill Head, from where a couple of folk were making hard work of the slither down to Ladyside Pike.  Turning my back on them, I nipped over Sand Hill and down to Coledale Hause, with lovely views towards Buttermere over sunlit Sail Beck.

Forsaking the windy Hause in favour of the direct ascent of Eel Crag, I soon reached the point where the ‘shelf route’ that I enjoyed almost exactly a year ago joins the prow of the mountain for the easy plod up to the substantial cairn that marks the highest point of today’s walk, Crag Hill (839 metres). 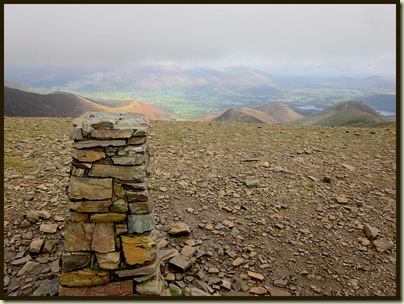 The views were atmospheric and delightful, with sunshine accentuating the bright green of the lush fields far below.

Rain was never far away – it is pushing in to the left of the picture below – but luckily I dodged it today. 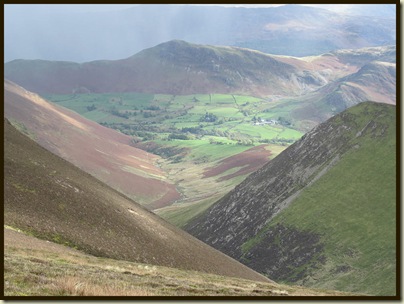 I made quick progress over Sail and enjoyed lunch with the view above, before heading on to the summit of Scar Crags, from where Derwent Water glistened beyond more sunlit fields. 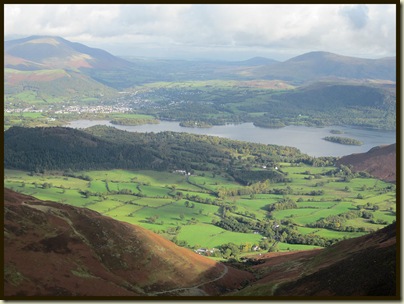 The path headed gently on to Causey Pike, from where a scrambly descent led to my final summit of the day, Rowling End, with this birds eye view into the valley below. 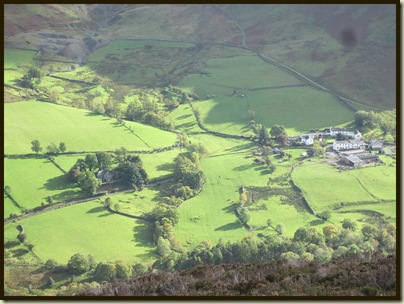 The steep descent to Stoneycroft over greasy rock was followed by a short road walk, then a lovely path beside a forest that dropped me back into Braithwaite well before 3 pm.

Here’s today’s route – 15km, with about 1300 metres ascent, taking a shade under 5 hours at a fairly brisk pace. 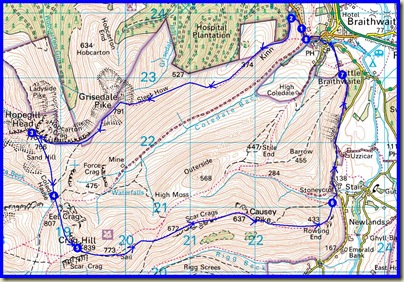 A slide show will follow if I get around to it, but there may be a short hiatus whilst the computer goes in for repair.

Today’s walk traversed 6 Wainwrights, 11 Birketts (they are great to ‘bag’, aren’t they!) and just one Marilyn – interestingly Grisedale Pike, not the higher summit of Crag Hill.  It’s a lovely round, always enjoyable. 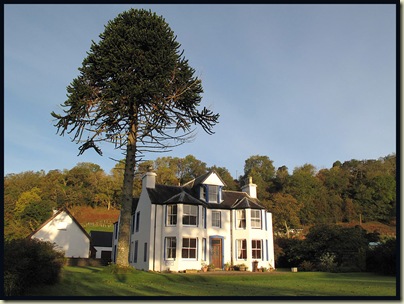 By 9.30 we had met up with friends staying in the Alex McIntyre Memorial Hut, and were marching up Gleann an Fhiodh with Martin S, Graeme and Alastair. 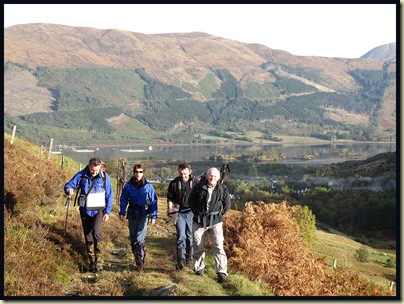 Everyone was very jolly.  It was a perfect day for a long walk in the Highlands.

After elevenses, with brownies and CCS both on offer, Martin S said his goodbyes and toddled off to bag a couple of Grahams – Sgorr a’ Choise and Meall Mor.  By coincidence he met Kirstie whilst descending from Meall Mor. 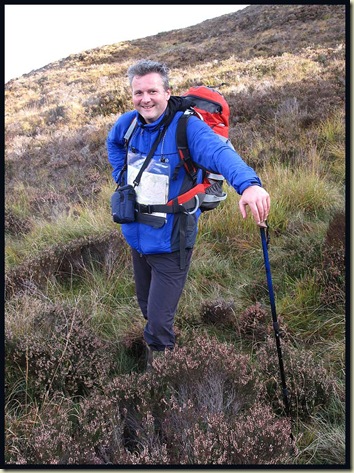 Meanwhile, others in the group may have encountered Gibson, proprietor of ‘Afoot in the Hills’ on Beinn na Caillich, across Loch Leven, where I enjoyed a fabulous wild camp back in May.  Gibson has some nice images from the same day, on which we may appear as pinpricks, here.

Views across the Mamores and over to Glencoe opened magically behind us as we mounted the long grassy slopes of Fraochaidh, accompanied by newly arrived migrant birds, perhaps Fieldfare or Redwing, and the roar of distant stags. 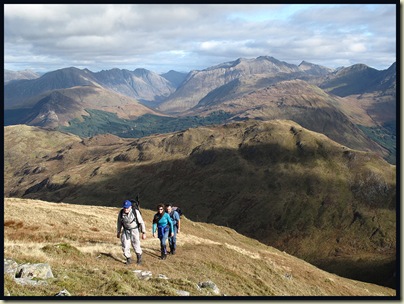 It took us 4½ hours to reach the summit, where we met the only other person seen all day.  He kindly photographed us by the cairn. 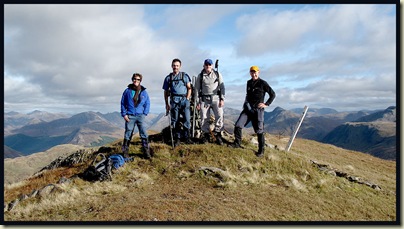 The views were superb, with the Rum Corbetts and the distinctive profile of the island of Eigg clearly visible some 50 miles distant. The view down Loch Linnhe to Ben More on the island of Mull is shown at the head of this posting.

With the sun on our backs, the leisurely descent was a delight, with the Pap of Glencoe gradually reasserting its dominance in our viewfinders as more distant hills receded behind the foreground. 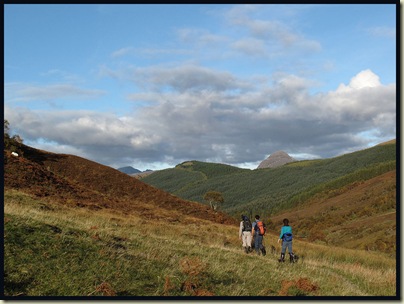 This tree caught the last rays of the sun before we descended into the shade of the Glen.

Autumn is noticeably much further advanced up here than it is at home. 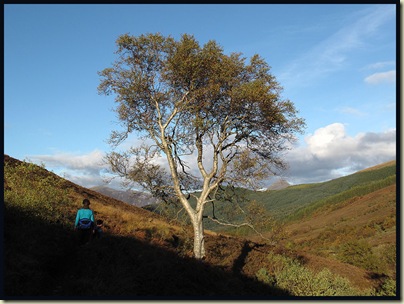 Here’s our ‘there and back’ route – about 20km, with 1250 metres ascent.  It took us around 7½ hours, including some lengthy breaks. 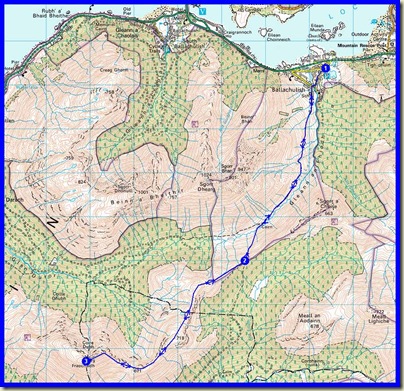 Martin S kindly collected us just as the last colours from the sunset reached Cuilcheanna, and we enjoyed a sociable evening with the XXL club members in the Memorial Hut, before a late night stumble back to our B&B. 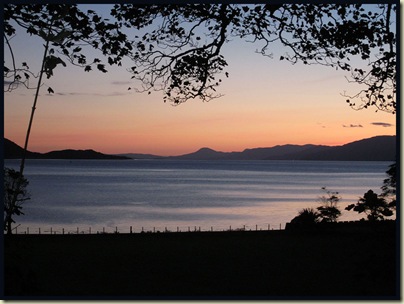 Sunday was overcast, cloudy and mizzly, so we said our goodbyes and returned home via Oban.

A slide show covering the whole weekend (our rainy Sunday may make some folk feel a bit better!) is here.

Thanks for your company, XXLers; we look forward to joining you again soon.