I’ve just returned from John Beatty’s excellent 2 hour presentation in Bolton to an audience of around 150.

The promo video is below.  I strongly commend this event.  Wonderful stories and wonderful photography.

John Beatty Tour promo from Speakers from the Edge on Vimeo.

The remaining venues are shown in the extract below:

Please click on the links below to book online where possible.  Please note that booking fees may apply.

*Please note John will be appearing at the Festival Theatre in Pitlochry as part of their Winter Words festival.  This will therefore be a shorter version of John's Wild Vision lecture with no interval.

There was no need to book in Bolton, where the full price was £13, and posters diaries and calendars were also on sale.

All in all, a most enjoyable evening.

Posted by Phreerunner at 23:24 No comments: 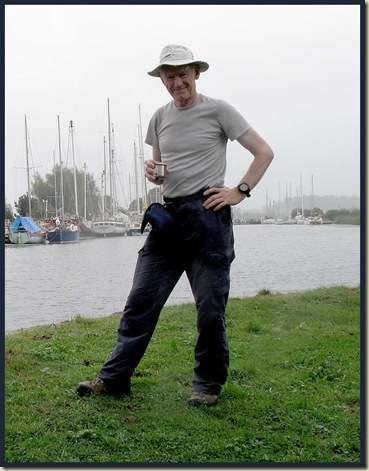 A cheery breakfast prepared us well for the dampness outside.

Waves crashed against the breakwater, denying us the low level route to Dawlish.  Bloated from last night’s biryanis

[“The curry sauce wasn’t hot enough” Andrew and I replied to the plump Indian chef in response to his polite enquiry.
Chef looks quizzically at our empty plates…
“Nobody ever finishes our biryanis! What are you complaining about?”
Andrew and I look down, slackening our belts.]

we heaved sweatily up to around 90 metres to meet the main A379 road.  I could swear I heard Andrew muttering under his breath…

….then down steep fields with a fine view of the coastal railway to Dawlish, where a very fit looking elderly lady runner shot past us, travelling much faster uphill than we were descending.

Dawlish had a nice sea wall.  Until its pathway dropped a couple of metres into the seething breakers, forcing us back up to the A379, which was taking its toll on Andrew’s overloaded feet.

We made it to Dawlish Warren.  The drizzle had ceased but it was hugely humid.  The cafés were all shut.  It’s ‘out of season’.  We left town to the constant clack on tarmac of Andrew’s walking poles.  Suddenly a café appeared before us.  Cappuccino and a jammy doughnut for me, black coffee for Andrew, still depressed after City’s failure to put away the opposition last night.

Refreshed, we plodded on to Starcross, where a summer ferry to Exmouth still appeared to be operating.  This would be our continuation of the coast path.  Next year.  A choice presented itself.  Bus, train, or continue walking?  Andrew, his poor feet reeking with fatigue, and unable to hobble across the road to the railway station, slumped next to the bus stop, and waited patiently for the next Stagecoach.  His perambulations, for now, were at an end.

It was early (12.15) and I was sure the path would improve.  The weather was fine and warm, the terrain flat.  I carried on past a ghetto of lone stags, all sitting patiently, possibly dreaming of their harem, or plotting how to attain the affections of the hinds that were grouped in a large gaggle some 200 metres away.

I was inland now, next to the Exe estuary, with a shy heron, little egrets, curlew, cormorants and a plethora of gulls for company.

The hostelry at Turf, where the Exeter Ship Canal starts, looked very quiet.  I lunched nearby, on a bench erected

from which the above photo was taken.

A pleasant tow path then led to the Topsham Ferry, which I don’t think was working, at a point where the South West Coast Path heads over the ferry and the path I was on mutates into the Exe Valley Way.  I followed neither, turning instead into the Exminster Marshes Nature Reserve, where I surprised some men with a digger who told me they were de-marshing the footpath through the Reserve.

Over the railway bridge to the Swans Nest Roundabout, where a mobile texting system informed me that the next bus to Exeter would be in 20 minutes.  It did eventually appear, just behind the following bus that was a further 20 minutes behind, but on time.  Perhaps I should have walked right in to Exeter.

Anyway, I was soon reunited with Andrew, then via a jolly taxi ride with our car,  before a 5 hour drive through intermittent rain but quiet traffic to end this little excursion.

There will be a summary, with stats (especially for Alan), and a short slide show if I can distil sufficient images from those taken in the rather gloomy conditions.

Posted by Phreerunner at 18:44 No comments:

Drizzle splattered over the pavements of Paignton. Andrew decided to start the day as he had finished yesterday. On the bus. Yvonne, our landlady, condoned his plan.

Not being a wimp, I headed off along the seafront, past hundreds of beach huts and underneath the pier.

Crows had replaced the terns of yesterday. It was dull and wet - not all that unusual for a coastal path trip.

I plodded on whilst Andrew endured a cup of instant coffee in a café run by a loquacious cockney.
Torbay came and went. Torquay seemed to last for ever. It did however become smarter. Its role as a graveyard for retired executives was confirmed by rashes of memorial benches in every green enclave.

Soon we were happily tramping along leafy woodland paths, with dog walkers waiting for their own memorial benches as our only company.

Andrew took whatever short cuts he could whilst I took a more purist approach in improving weather - it was a fine afternoon and actually sunny by the time we reached Shaldon, with fine views over Teignmouth (see today's image).

Our journey (22 km for me, much less for Andrew) ended with a short ferry trip, on a big old rowing boat, that took us nearly all the way to Devonia House, our home for tonight.

We then sought out the best restaurant in Teignmouth - an Indian - before acceding to one of Andrew's unfortunate addictions - a Manchester City football match on a pub TV.

Next Day
Posted by Phreerunner at 22:17 3 comments: 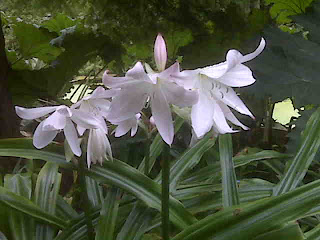 We were greeted by a dull and overcast morning after overnight mizzle. But a full English had us champing at the bit for today's perambulations. A grumpy Spar lady failed to dampen our enthusiasm and a stroll through the sleeping town located the other workers. Two jolly ferrymen, who soon delivered us safely to Kingswear, whence the Coast Path led us through pretty woods.

The other early risers were busy in their sailing boats, readying themselves for the starter's gun. Just one minor problem. No wind. Yesterday's blustery conditions have dissolved into today's humid, overcast, calm weather, with sea fret over Torquay.

Two chaps welcomed us into a cabin from which they perform the role previously carried out by coastguards, on a charitable basis. All merchant vessels over 2000 tons are required to broadcast their whereabouts constantly, so their names were on the screen. Another large unidentified vessel on the horizon was identified, via Jane's Ship Silhouettes, as one of two naval supply ships.

A little further on, after a flurry of cirl buntings and a man with a telescope trained on a distant grey seal, a steep pull through some gates found us at Coleton Fishacre Garden, a National Trust property. We were dripping in the humidity. "Coffee and cake, please." "Would you like some water as well?" "Yes please."

The gardens were still rich with brightly coloured flowers - some are pictured above; the conditions today were too dark for any other phone photos.

The path undulated like a fairground ride for the next section to Man Sands. Lunch was most welcome, though for the second day running my butty was singularly unappetising.

Afternoon tea at Berry Head, where the Napoleonic Fort didn't quite match the splendour of its Italian counterparts, was followed by a gentle stroll into Brixham, where Andrew, 19 km into today's stroll, changed his mode of transport. Half an hour later, at 4.30, he had reached our B & B in Paignton and was preparing for a good rinse.

Meanwhile, I spent some time in Grove Woods, beyond Brixham, inadvertently taking a 2 km diversion to achieve a 400 metre progression along the coast path.

At 5 pm I entered the sea fret and donned waterproofs for the first time for many weeks.

The paths remained pleasant and rural. The Devon Belle steamed past, headed by a magnificent old engine - a GWR County Class or similar.

By 6 pm I had entered Paignton, where I discovered that my map bore little relation to the ground on which I found myself. A call to Andrew resolved the problem, and he kindly ventured out to track me down.

The inadequacy of my map was confirmed...
"That's a map of Dartmouth" observed Andrew.
Oops!

Paignton revealed little by way of options for sustenance, but my convoluted wanderings had not been in vain - I'd spotted the Harbour Restaurant, which fed us very well.

I've spent 9 hours walking the best part of 30 km today, with around 1400 metres of ascent, so am looking forward to another good night's kip.