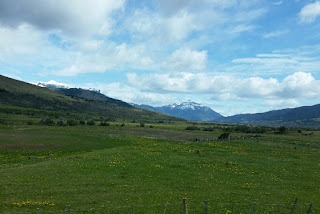 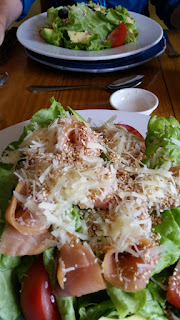 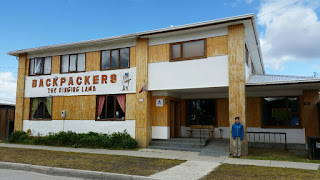 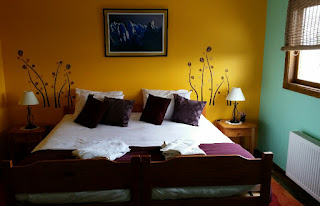 Another bus ride. This time we left El Calafate at 6 am and arrived at Puerto Natales around noon. It's further south, so the days are even longer here - daylight lasts almost until 10. In fact the daylight hours are very similar to those in Scotland in May.

The road rose to around 800 metres, where we drove through slush for many miles in a white, foggy landscape. And it wasn't only the windows that were fogged up.

We'd hoped for a coffee stop and had saved 70 pesos for the purpose, having swapped our excess 3000 pesos for €200. That did us a favour, and Tom and Natalie, a German couple, needed some currency. They gave us a good rate, so as they were on the same bus we gave them our remaining few pesos as the bus didn't stop until leaving Argentina. The two drivers managed to swap over whilst the bus was travelling at 50 mph.

So we arrived in Chile. Our position at the front of the bus saw us accepted into the country at the head of the queue. Our dried food was declared and was deemed acceptable, so we finally had chance to enjoy a coffee whilst others queued to be let in.

This was at Cerro Castillo, where condors or eagles soared high above and most of the passengers left to enter the Torres del Paine National Park on day trips or backpacking treks. Along with a few others, we had chosen to go A bit further on the bus, to Puerto Natales. This fits in with our longer term plans.

Our hostel, The Singing Lamb, is excellent. We dumped our bags there and enjoyed lunch in Café Kaiken, where we met Rich and Sharon, an English couple on a long trip. Our salads were great.

The afternoon was taken up largely by a talk from one of the staff at another hostel, Erratic Rock. It was helpful and illuminating. Lots of folk then braved the bitter weather to lay siege on the local supermarket.

We have another bus ride in the morning, when we return to the park to embark on a nine day backpacking circuit. We are assured there will be no wifi or phone signal, so we now need to sign off for nine days, I think.

Sod's law dictates that the Fasthosts server that we rely on seems to be down, preventing us from communicating with the outside world. So it may be nine days before you receive this missive.

Today's pictures are from the bus, of lunch (for Robert and Lyn) and our accommodation and room before our gear bomb hit it. 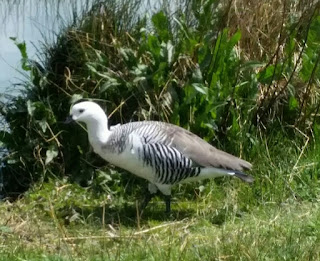 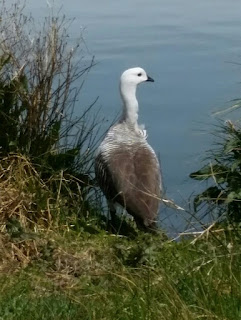 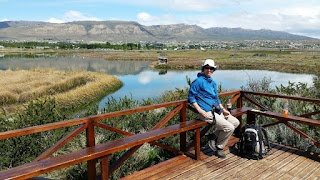 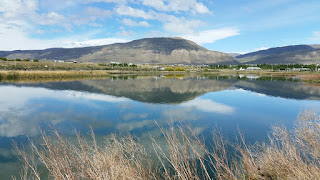 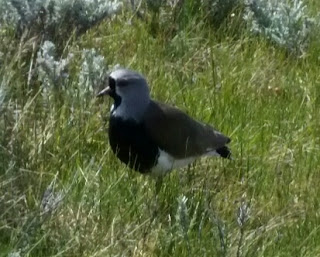 We spent several hours in the delightful presence of the denizens of this bird reserve, involving about a 7 km circular walk from our base at America del Sur Hostel.

It was a perfect way to spend a day with no particular agenda before returning to the luxury of the hostel.

The Reserve was created in 1986 to preserve:
(Add the usual blurb for such places.)

A list of 77 bird species presented something of a challenge. "You could see between 20 and 30" said the wardens, "we counted 23 when we walked round the other day".

We were up for that challenge on an otherwise lazy day. Just for the record, we spotted the following:

plus others we aren't sure about...

The pictures were taken in the reserve. The birds are the Upland Goose and the Southern Lapwing.