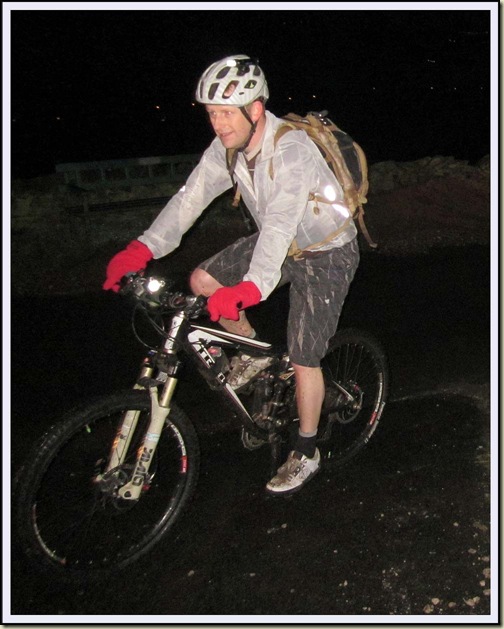 Last night I enjoyed my second trip out with the Manchester Mountain Bikers, this time on a ‘night ride’, my main reason for getting together with this club.

A ride that lasts from 6.30 to 8.30 pm would more correctly be described as an ‘evening ride’, but it was dark, so who cares.  It was also fine, after another ‘mizzly’ day, and thankfully (whilst Liverpool were thrashing City in the rain in central Manchester) all we got by way of precipitation on this ride was a little very light drizzle.

Roman Lakes being closed, we started from Arkwright Road in Marple, taking care not to damage a pristine hedge, and soon after 6.30 I headed off with Walc, today’s leader, pictured above, Keith who I’d met before, and Steve, Adam, Richard, Austin and Poley, down the rutted lane towards Roman Lakes, then up the steep, rough lane to emerge at the golf course in Mellor.

This was the steepest part of the outing, which although ridable in its entirety somehow did seem to be mainly uphill.  Luckily Keith was ‘sweeping’ on this ascent, and arrived at the top carrying my rear mudguard and a foot protector that I’d lost without noticing.  Thanks Keith.  The other foot protector came off (my trail shoes turn out to be two bulky for these protectors, normally worn with trainers) and the mudguard was re-attached, though I spent the rest of the evening nervous about losing it again.

We were soon off again along the pleasant single-track to Brook Bottom and (sadly) past the Fox Inn.  Around here we lost Poley, allegedly due to a light failure, but I think he just fancied a drink. We then turned left to complete an interesting circuit via a fudge brownie break and Mellor Moor, with fine views of the lights of the surrounding towns, before regaining the single-track leading back down to the Fox Inn, which again we ignored, this time in favour of a steep but enjoyable descent to Strines Station on another track that hadn’t previously seen the wheels of one of my bikes.

Then it was easily back to the start via the lower track past Roman Lakes, chatting with Keith about bike trips to the Alps and Pyrenees.

I think Walc had intended to ascend back up to go around the golf course and down to Roman Lakes by a more sporting route, but it seems that he missed the turn.  I was quite happy with the short figure of eight circuit.

My new lights worked very well, and there was hardly any speed sacrifice due to the darkness, but a minor gear problem meant that I stayed in a low gear throughout the ride in a bid not to get covered in oil, so I tended to bring up the rear, being naturally the slowest on steep ascents and descents as well.  Sorry, folks, if I kept you waiting.

Here’s the approximate route – about 14 km, with 350 metres ascent, taking just over 2 hours. 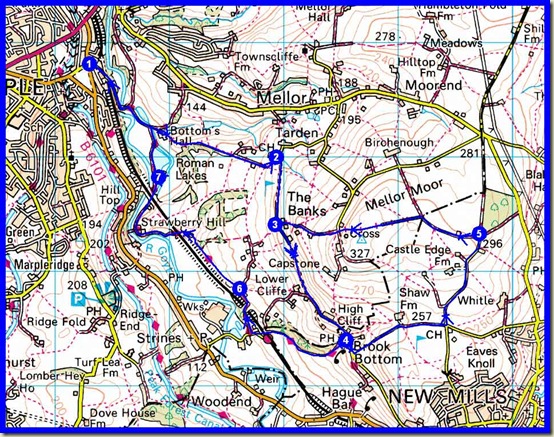 As noted above, we returned extremely muddy.  So when I got home I dumped my track suit straight into a sink to wash off the worst of the mud.  Oops, my camera was still in the pocket.  It drowned.  It will now sit in a bowl of rice for a few days in a (probably futile) bid to resuscitate it.  The memory card was undamaged, though, and at least it wasn’t my new camera…

All in all a very pleasant little excursion, despite the camera mishap.

Posted by Phreerunner at 08:52 No comments: 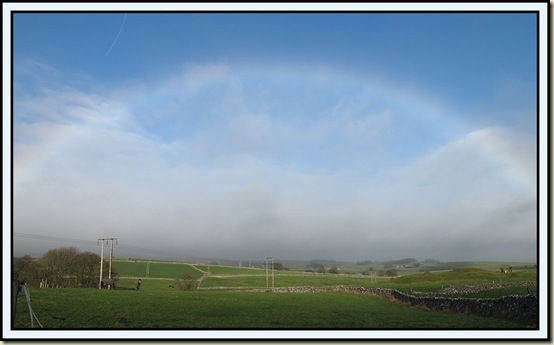 With virtually no traffic we arrived early in Taddington, where sadly the Queens Arms wasn't yet open – so most of us had a long wait outside the pub.

Eventually we did get going, and 16 folk stumbled out of Taddington.  Mick was particularly eager to be let off his leash. 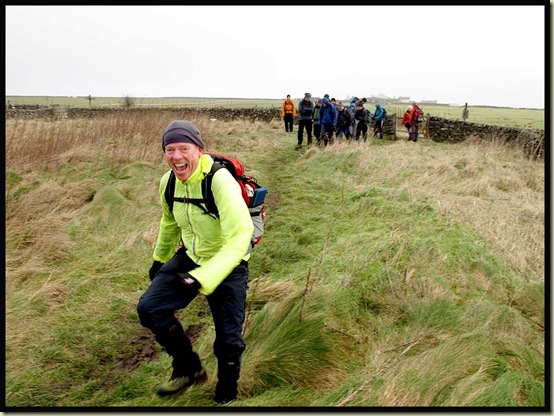 We were walking into what appeared to be a cold mizzle – it looked set to be a rather dank day.

The approach to Chelmorton took us past the village's former water supply – Bank Pit Spring, known as ‘Illy-Willy Water’, situated by a former lead mining site.  It was replaced in the late 19th century by a nearby (now redundant) 10,000 gallon tank.

We passed the Church Inn, ignored by our leader, who pressed on through the gloom. 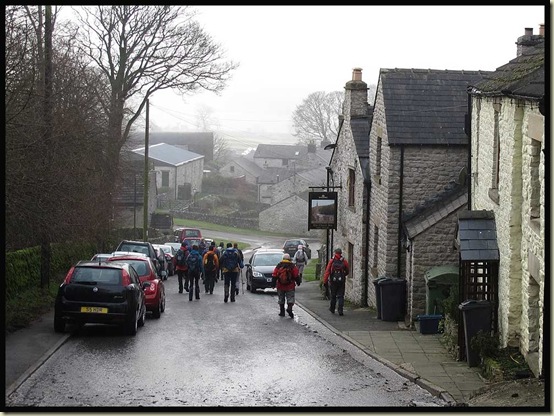 After a while elevenses were taken beside a convenient wall at Town Head, with fudge, fudge brownies, and Phil's chocolate orange to supplement our diets.

Some grunting noises from behind the wall revealed some chatty residents. 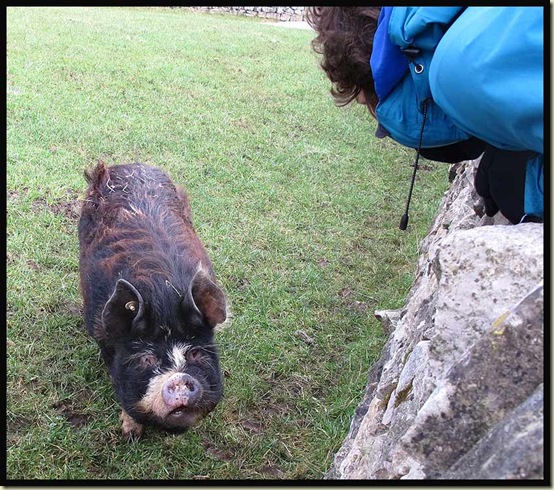 We continued towards Flagg, in unexpected sunshine. 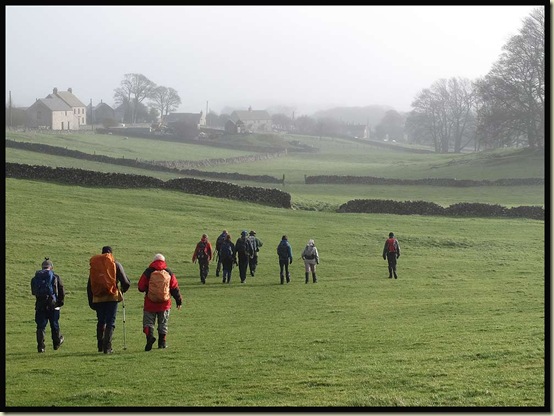 A skein of Canada Geese flew overhead, whilst a flock of Fieldfare and Redwings browsed in the fields nearby and a Kestrel hovered in the distance.

Our first strange encounter was an unusual mistbow (“a nebulous arc of light”) pictured at the head of this posting, which held our attention for some time and actually remained in position for much of the day.

Monyash was crowded with walkers, so some of us lunched at the War Memorial. 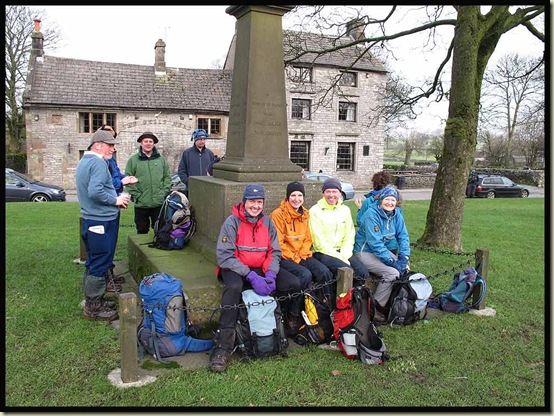 Other members of the group pointedly sat elsewhere; we were being irreverent in their eyes.  But we thought the remembered servicemen would delight in the fact that we were using the perfect 'bench' afforded by their memorial to scoff our well earned lunch.

The nearby Bulls Head provided sustenance to those whose flasks had run dry. 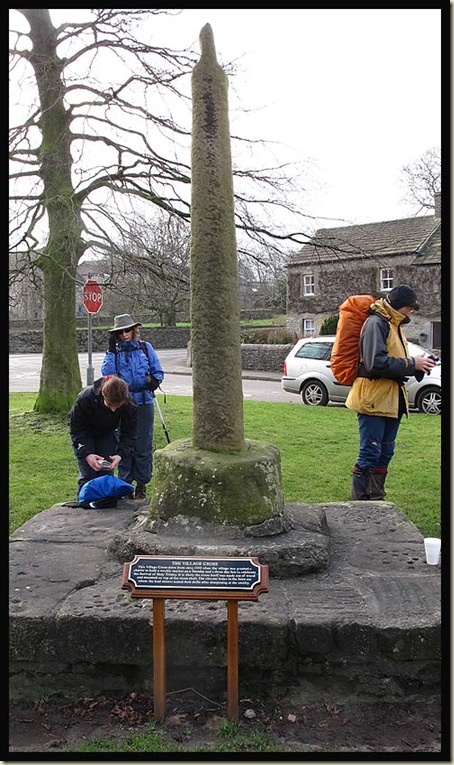 …dates from about 1340, when the village was granted a charter to hold a weekly market on a Tuesday and a three day fair to celebrate the festival of Holy Trinity.  The cross was probably wooden, and mounted on top of the stone shaft.  The circular holes in the base are where lead miners tested their drills after sharpening them at the smithy.

The end of the mistbow had the features of a rainbow, but most of its nebulous arc was the white of a mistbow.

We came upon the remains of Magpie Lead Mine, near Sheldon. 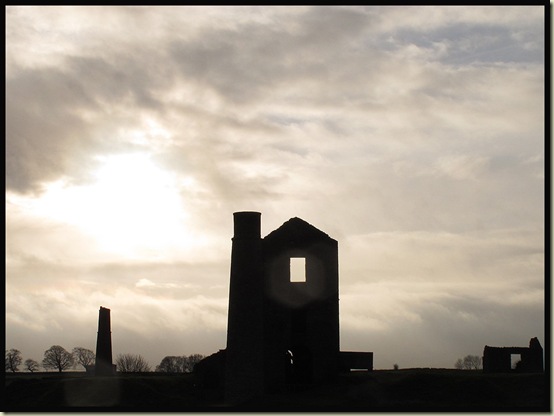 According to the Peak District Mines Historical Society’s website:

The earliest recorded workings date from 1740, and the Magpie Mine was one of several such ventures working different veins in the same area. The miners had difficulty in keeping the workings free from water, but by 1824, a Newcomen type pumping engine had been erected on the Main Shaft. This led to the production of 800 tons of lead being mined in 1827, a record that remained unbroken until 1871.

Magpie Mine was also troubled by disputes with neighbouring mines over who had the right to work each vein. Miners from Magpie Mine and Maypitt Mine were both working the Great Redsoil Vein, and would light fires underground to smoke out their opponents. The arguments raged for years, both underground and in the courts. In 1833, three Maypitt miners were suffocated by the fumes, and 24 Magpie miners were put on trial for their murder. Several were freed immediately, and eventually all were acquitted because of the difficulty in identifying the individual culprits, and the provocative actions of the Maypitt miners themselves. It is said that the wives of the "murdered" men put a curse on the mine, and the effect of the disputes was to ruin the mine, which closed in 1835.

In 1839, the Magpie Mine, now incorporating the Great Redsoil workings, was reopened. A number of innovations were introduced, including steel borers, safety hats, safety fuse, and iron winding ropes, as well as a more regular pattern of shift working and payment for the workers.  The Main Shaft was deepened to 208 metres, and a 40-inch Cornish pumping engine was installed. When this proved inadequate, the manager proposed to replace it with a 70-inch engine, but the proprietors could not agree. Some felt that a sough (a drainage tunnel) would be a better solution, and appeals to the Duke of Devonshire to adjudicate fell on deaf ears.

Various attempts were made over the next 30 years, but it was not until 1873 that construction of the sough started. It took eight years to drive it from the River Wye near Ashford-in-the-Water to meet the Main Shaft, a distance of 2km.

Production of lead continued on and off into the 20th Century. An optimistic report in 1913 promised reserves of four million tons, which attracted businessmen from Sheffield and Glasgow to join forces with the owner. Their venture closed in 1919, and despite briefly reopening in 1923, nothing happened  with the mine until after the Second World War, when attempts to work the mine using submersible electric pumps were made.  A new winder - in reality a ship's winch fitted with a diesel engine - and a steel headgear were installed. Despite this more sophisticated equipment, no large body of ore was found, and with the end of the Korean War and the fall in the price of imported lead, the mine closed for the last time in 1954.

Back to the present…

After some uncertainty regarding the route, we passed through a vehicle showroom, where Paul was encouraged to make an offer for this fine machine with an identity crisis. 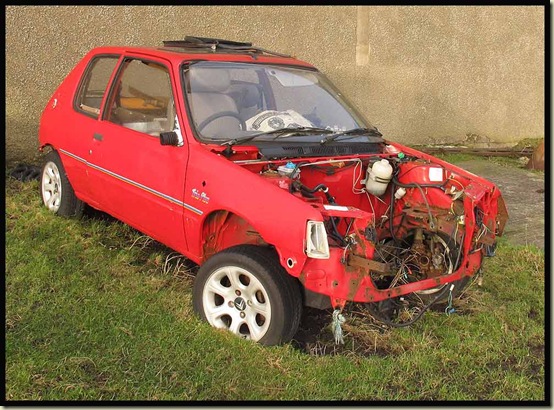 Sheldon looked a nice village, with home-made produce for sale, and a pub, around which our leader skillfully manoeuvred us. 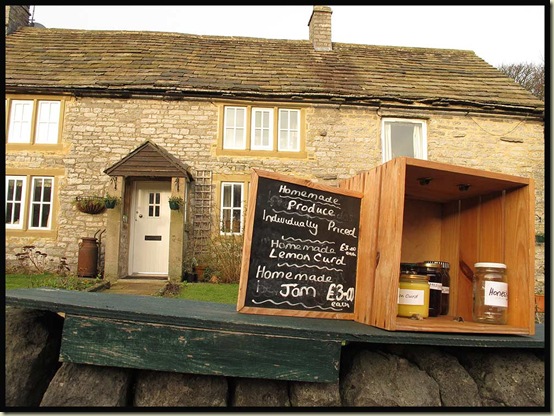 Our second strange encounter of the day came at the top of Deep Dale, where some mountain bikers were lifting their equipment over a stile.

“They shouldn’t be here” – I could hear mumbling from some members of our group concerning the presence of bicycles on a footpath.  Looking down Deep Dale, we could see that it was very steep – hard enough to walk up, let alone push a bike.  One of the stragglers was huffing and puffing, and I’m sure I detected a voice emitting “Get a Move On” noises.

Yes indeed, this mountain biker was being encouraged to go more quickly, apparently by way of a combination of such noises and prickly love bites, by no less than a Green-cheeked Conure or Parakeet! 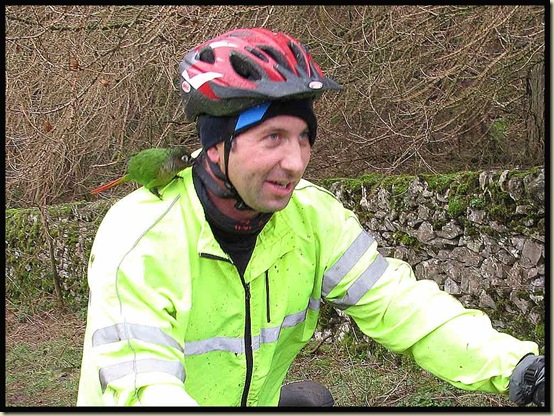 There’s a first for everything I suppose, we’d never seen this before, and those who (unbelievably) missed it didn’t believe the rest of us and claimed that my camera must be loaded with a photoshop tool!

And to be fair to these friendly mountain bikers, although it seemed like a narrow path, they actually had every right to be where they were – on a bridleway. 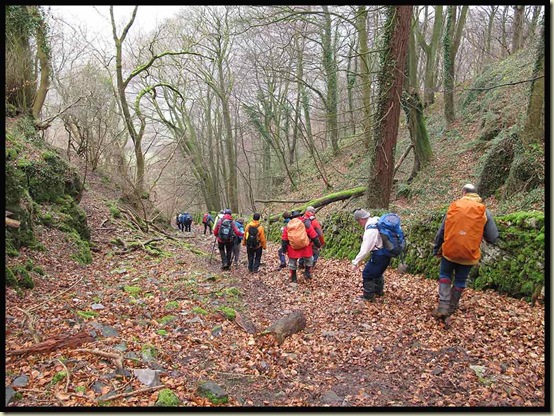 A nearby information board refers to this area as having been lived in since Neolithic (Stone Age - from 4000-2500BC) times, and a 'Dark Gully where demons lived'.

By the time we had crossed the A6 and ascended to Brushfield, the light was failing and the mizzle had recommenced. I was at the back, or I’d have led a splinter group along the track to the NW of Brushfield, before turning SW down the pleasant path across High Dale, avoiding any tarmac.  But in her wisdom our esteemed leader (thanks Sue W) took us down to the A6 for an unpleasant section of tarmac completely at odds with the excellent quality of the rest of the route.  Luckily, back at Taddington the pub was open and the beer was good, in front of a roaring fire, for the six of us who enjoyed a relax and a chat before heading home. 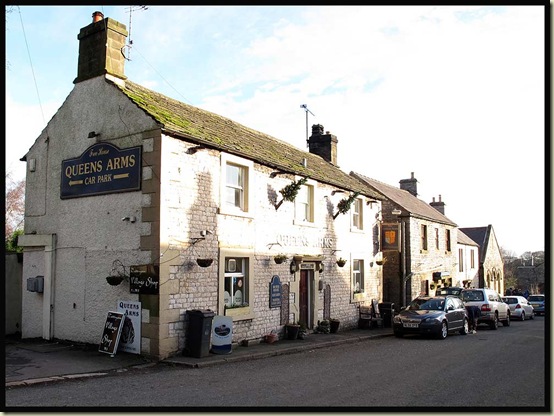 Here’s our route – 20km with around 400 metres ascent.  It took us 6 hours, of which we were not moving for 2 hours.  The section from 8>1 is not recommended (by me at any rate) – I commend the track to the NE of High Dale, then the path across High Dale to Taddington for a very amenable conclusion to a good walk before reaching your 6th hostelry of the day… There’s a mediocre (44 image) slideshow here, mainly for the benefit of those on the walk.

Here’s what the Garmin gadget recorded – feel free to use this data, Gayle (she forgot to turn her Gg on).