The Hot and Dusty Road to Verona 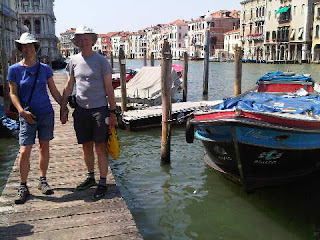 It wasn't, I just took a fancy to that title.

What better way to start a trip than spend some time with the author of the guide book that you are taking with you? Not that we will follow it religiously, but Gillian (pictured with Sue at lunchtime in the previous posting) doesn't object to that.

Jet2 efficiently deposited us in Venice, together with a large contingent of 'Venom' Cheerleaders Association's adults and children (difficult to tell which was which - many hadn't flown before) and a jolly Australian girl with legs up to her armpits who was heading with almost every conceivable relative to a cruise ship.

After dumping our bags at Gillian's house we adjourned with her for a chatty lunch. Our itinerary was scoured for defects and just about came through unscathed, though our meticulously booked trip does lessen the options for some interesting diversions. But at least we don't need to worry about whether or not accommodation will be available.

It was hot in Venice. Easy to start dripping if you moved too fast, or even at all. Nevertheless we enjoyed a lovely stroll with Gillian under a clear blue sky. There was a light breeze to cool us beside the waterways, one of which is pictured above. Gillian writes guide books on Venice, so we enjoyed a smattering of informed comments and explanations regarding the history of the city. Apparently it was built, hundreds of years ago, on wooden pilings topped by stone blocks, with rivers running through the city. Those rivers have now been diverted in favour of the canal system, and modern day piling looks authentic but is actually coated with plastic.

Ice cream and coffee stops, a pause for thought at the Bridge of Breasts (where the ladies of the night hung out in bygone days) and a visit to a pharmacy where a room was devoted to old medicinal compound jars lined up on shelving within the wood panelled room with its locally quarried marble floor littered with ammonites (as a pharmacist Sue was granted the rare privilege of entry into this domain), punctuated our wanderings, and all too soon we were back at Gillian and Nicola's house in time to deliver a fine Turkish carpet to Lazar. "He owes me a favour" said Gillian, and bagged us a lift to the station in Lazar's little motor boat, which apparently he brought from Belgrade on a roof rack. As if there are no boats in Venice!

Anyway, our water borne journey (yes, Alan, the roads here have been flooded for so long that everyone has a boat!) back to the station was a delight. Thank you Lazar, and thanks Gillian for a lovely afternoon - as I've already said, the best way we could imagine to start this trip.

The express train to Verona would have cost €23 each. The stopping train, a well equipped double decker, cost €7.40 each. We took that. A pleasantly air conditioned two hour journey with enticing spiky Dolomitic summits on the horizon, followed by a short taxi ride to the improbably named but surprisingly smart Grotta Hotel.

We'd tried to get a room in town, but the start of the opera season seemed to have put paid to that, so we were slightly concerned to have arrived out in the sticks at 9pm (8pm UK time) without having had any supper.

"The restaurant is shut - the cook has gone home" the helpful receptionist informed us ... "But you'll be fine round the corner."

We followed his directions to an unlikely venue under an office/apartment block where you'd normally expect to find a car park. NaturaSi - 'cucina Biologica' was not a car park. It was full of people, but there was no sign of a tourist - the closest to that was a group of street artists who waltzed in after 9.30. So people come From Town to this strange restaurant in the sticks that sells food cooked with local produce that's in season!

We couldn't believe our luck. For €18 each we could eat as much as we could of their 'gourmet buffet'. What a great idea. The food was brilliant. In a way it was like last Friday's tapas meal, except that tonight we served ourselves. It was brilliant.

We were sorry to hear from JJ that it was raining in Timperley - we knew that - it started shortly after 5.30 when we startled our taxi driver by being ready and waiting for him in the street.

"I can't remember when that last happened" he had offered in a gratifyingly pleased tone.

That seems a long time ago, and my eyes are now struggling at the other end of the day. So I'll end now with thanks to Gillian, Patrick, Jules, Laura, Alan and Gibson for your comments. Gibson, you are correct, we do put ourselves through untold hardships (as anticipated by Patrick) on these trips! To be honest we only do it to give Dot (my mum) something to read - she gets bored with stories from the banks of the Bridgewater Canal! 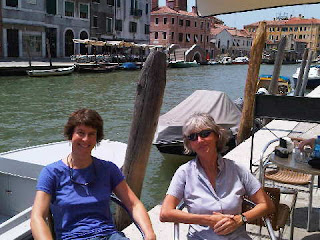 Sent using BlackBerry® from Orange
Posted by Phreerunner at 12:33 4 comments:

Across The Eastern Alps: E5 from Verona to Lake Constance 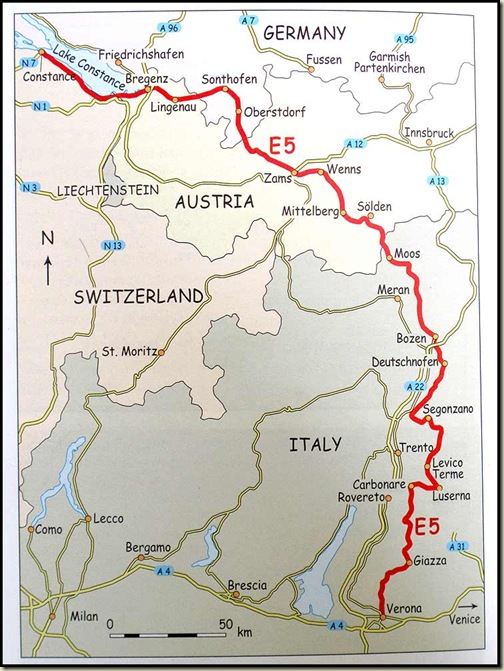 The more alert amongst you may have realised that we are about to embark on the southern section of European Walking Route E5, which runs for 3200km from Pointe du Raz in France to Verona.

The map shows our own planned route, subject to a few diversions, which we are walking in the ‘wrong direction’, ie from south to north, in order to avoid the late snow in the Austrian Alps and obviate the need to carry ice axes and crampons, as they would struggle to fit into Sue’s bum bag.  We will be walking around 540 to 600 km in total, over about 37 days, including some rest days.  Sue still can’t carry a rucksack, so it’s on a B&B basis.

Gillian, you may recognise the map – it’s from your excellent guide book, which we will attempt to negotiate backwards, starting at page 152!  The book has already proved invaluable in planning our itinerary, which includes a side trip into the Lechtalalps.

This promises to be a fine trip through a wide variety of Alpine scenery and habitats.  We hope you’ll enjoy the Postcards from the comfort of your armchairs. 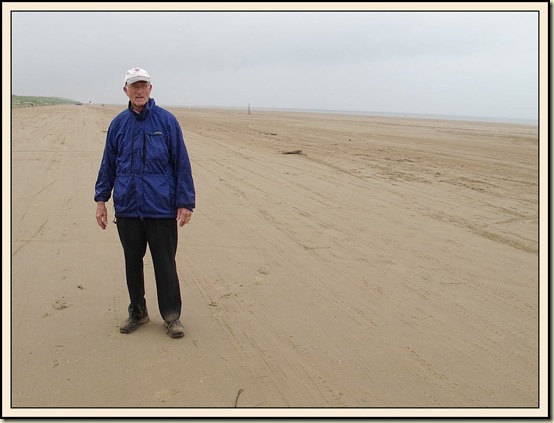 Yesterday (Tuesday) I enjoyed a brief visit to Ainsdale (Southport), for a stroll in the dunes with Tim, who’s had a rather difficult and traumatic time recently.

We spotted lots of this orchid.  It looks to me a bit like a Pyramidal Orchid, or something similar. 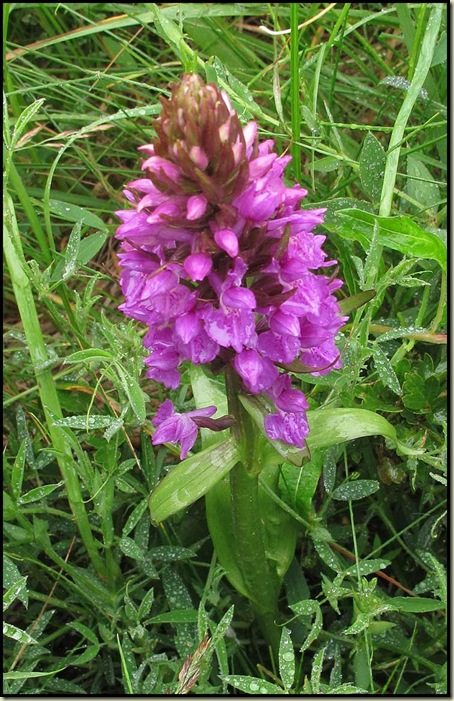 We also spotted this plane, just beyond the Pontins Holiday Camp, where the inmates appear to be kept under armed guard! 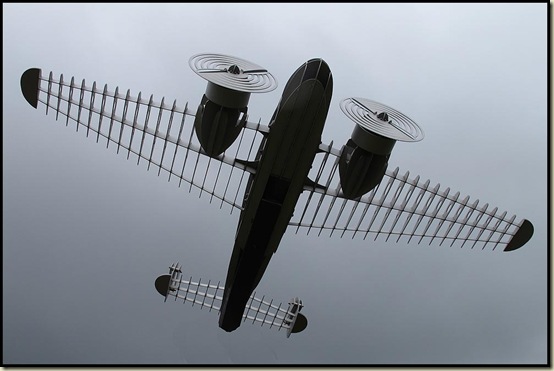 Posted by Phreerunner at 23:38 No comments:

It’s over three years since we’ve been here, and the weather wasn’t so good.

Time to revisit?  Yes.  There’s a nice path from Verona, we are led to believe… 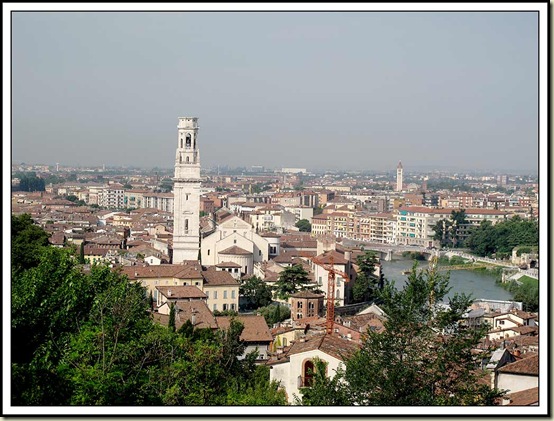 It’s nearly two years to the day since we visited Verona.

Our next ‘trip’ starts from there exactly two years after the above picture was taken.

I’m told it’ll be quite hot…