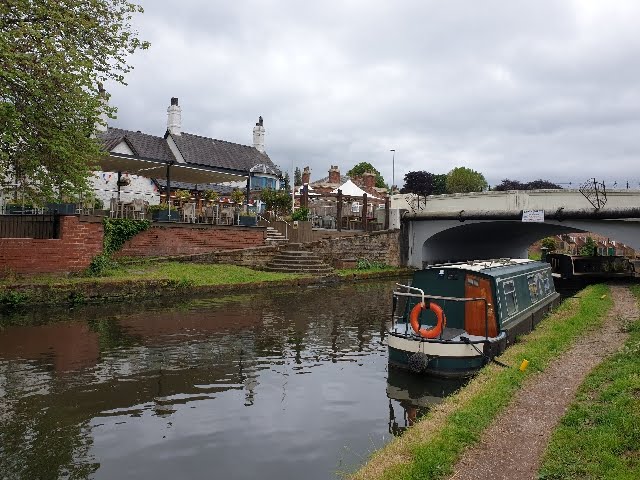 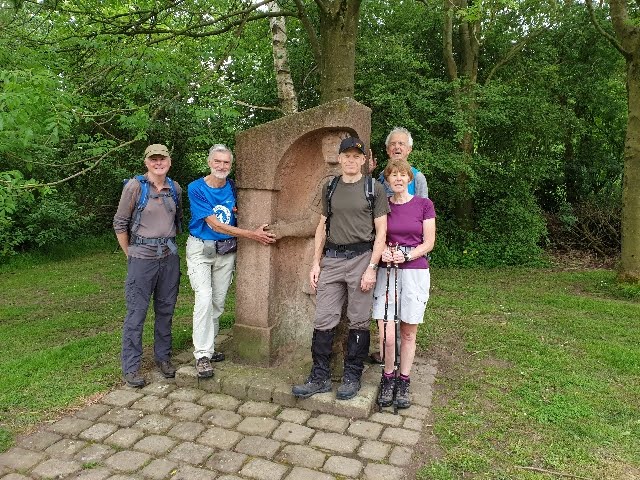 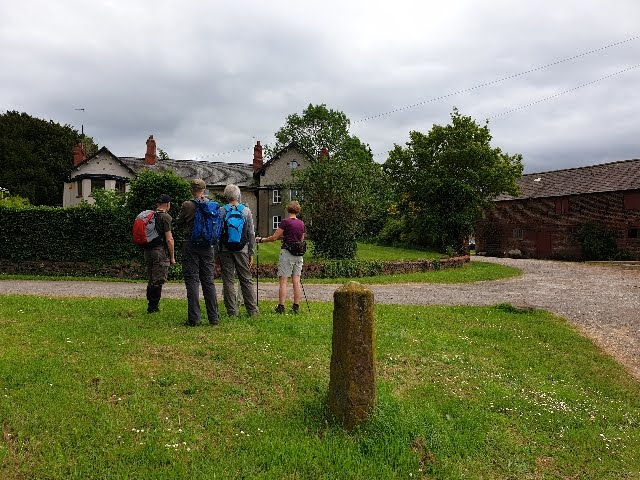 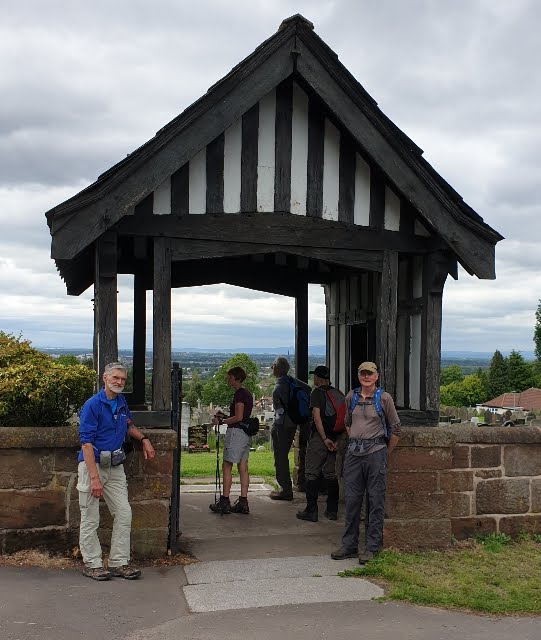 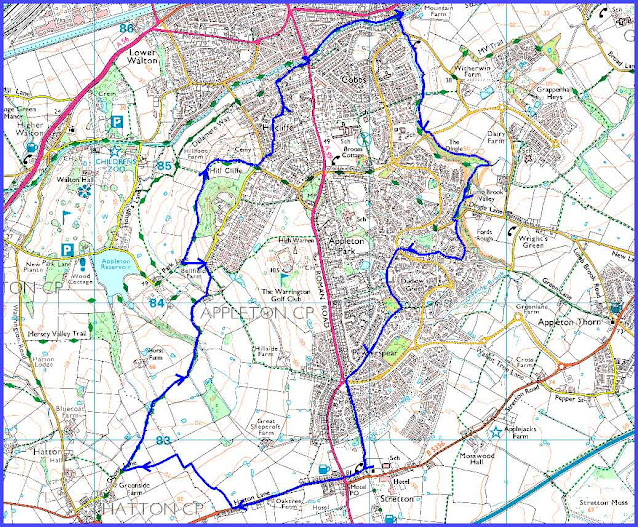 The next Friday walk is next week, Friday 7 June, around Werneth Low - see http://www.topwalks.com/summary.htm
Posted by Phreerunner at 15:57 No comments:


This was a walk with Stockport Walking and Outdoors Group (SWOG), in the company of twenty folk who braved the drizzle.

We started off along the Middlewood Way (above), from near Rose Hill station, before crossing a golf course to reach the towpath of the Macclesfield Canal, with Graham leading the way (below). 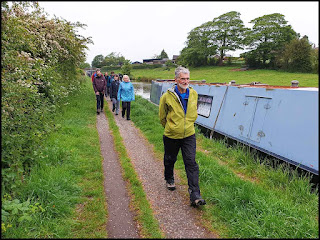 Graham was quite justified in leading the way. He was tonight’s leader. Frequent pauses to allow ‘catch up’ were made. We re-grouped at a bridge where we left the security of the towpath. 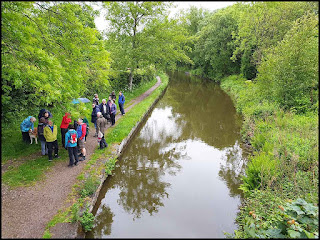 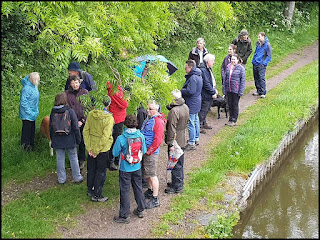 Then we went through a field of buttercups to a stile that was a bit too much for a large, daft dog someone had brought along. 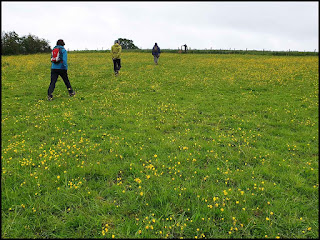 Deep wet grass put paid to many people’s hopes of keeping their feet dry, and a couple more stiles made life interesting for both walkers and the dog. 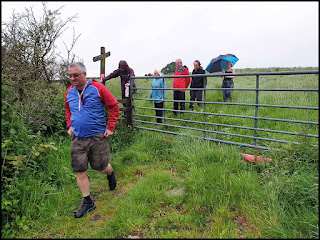 After passing what used to be the Romper pub at Ridge Fold, now a private house, we descended to the Peak Forest Canal. In good weather the views here are excellent. Today we had to make do with a misty look down to the canal. 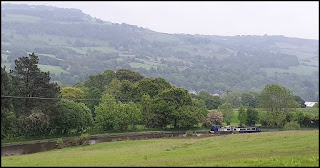 Then it was a straightforward stroll along the towpath to Marple, passing a community of Canada Geese, with several groups of youngsters getting ready to nestle down for the night. 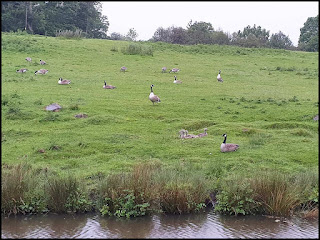 The Macclesfield Canal joins the Peak Forest Canal in Marple, and the Canal and River Trust has recently put up lots of new signage. 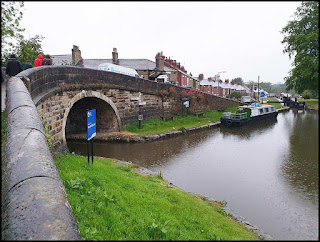 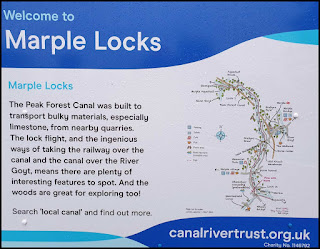 If you click on the last picture you’ll discern reference to a ‘horse tunnel’ under Stockport Road. My children used to enjoy playing here, miraculously never falling in! We have a picture of it in our living room. There’s a passage to the right of the tunnel that isn’t obvious in the picture, and where fields are shown it will be no surprise to know that houses now occupy much of that space. 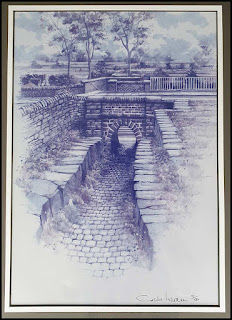 Returning in the gloom along narrow paths beside allotments, we soon arrived back at Rose Hill, where the Railway pub provided a good choice of very welcome rehydration fluids.

Tonight’s route was about 8.5 km with 100 metres ascent, taking two hours. Here’s the route, kindly devised and led by Graham. 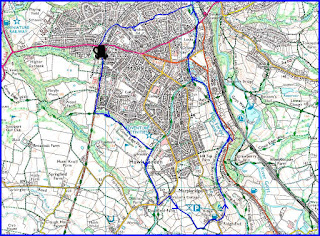 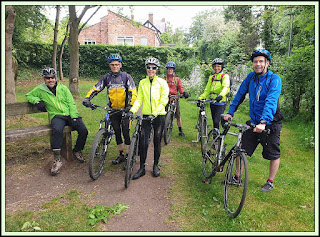 Despite a showery start, Bank Holiday Monday saw a record turnout for a Monday morning bike ride, with Sue, Paul, Jeanette, Alastair, Richard and Jan all making it to the rendezvous point at Seamons Moss Bridge, albeit Jan was rather late having got lost in Timperley!

With Alastair and Jan normally having to work on a Monday, and Paul and Jeanette on child minding duty in the future, numbers are set to rapidly diminish.

I think it’s November since we last cycled this route (report here), though a shortened version with a café in Stockton Heath has been ridden a few times – see here.

Sue came as far as Grappenhall, so was included in the photo taken just as we joined the canal briefly in Lymm, where we received abuse from dog walkers despite being extremely courteous and doing no harm to the hard surface of the towpath. It has happened before; apparently there’s a ‘No cycling’ sign.

At Grappenhall we paused to show Jan the Cheshire Cat on St Wilfred’s church – see here, it’s obscured by the lamp in the next picture.

(Click on any picture for a better resolution image or a slideshow.) 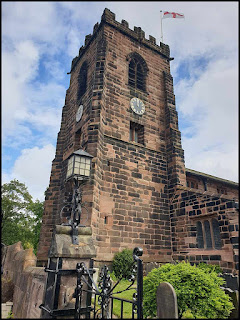 We seemed to take different routes down the hill to Phoenix Park, and the others found their way to Norton Priory’s tearoom whilst I went up to Halton Castle. I soon returned to the tearoom. The coffee and cake had been demolished! 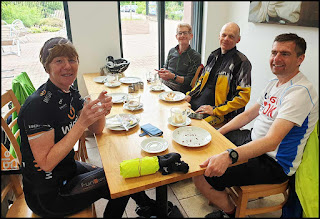 Then we went back to Halton Castle. It looks like I nearly got left behind again, as I seem to be leaving the tearoom without a bike. Duh. 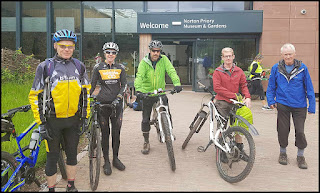 The site of Halton Castle, at the top of a nearby hill, is accessed via The Castle Hotel pub, where the landlord unlocks a door to access the castle, which doubles as a beer garden. There are good views from here. Today’s visibility wasn’t brilliant, but we could see the old bridge, and the recently opened bridge that has relieved the traffic problems in the Runcorn area. 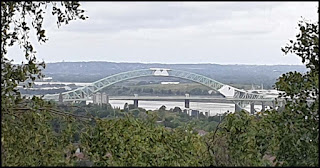 The narrowing of the River Mersey at Runcorn has provided a crossing point for centuries, with a regular ferry since the Norman Conquest, formally established in 1178 by John Fitz Richard, the 6th Baron of Halton.

There’s not a lot left of the castle. The information board shown below gives some idea…

For most of its life, the castle was used as a courthouse and prison. In 1737 the gatehouse was replaced by a new courthouse which is now the pub through which you enter the castle grounds.

From the raised area where the castle once stood, St Mary’s Church is overlooked, with the courthouse down to the left in the next picture. 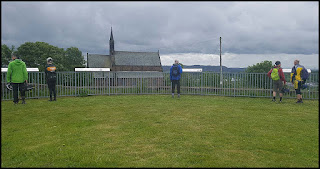 The church dates from 1071, in the time of Nigel, 1st Baron of Halton. I don’t think what you can see now is quite that old! In fact, it’s a 19th century building.

Maybe I’ll visit this place again and delve a bit further into what must be a rich history. 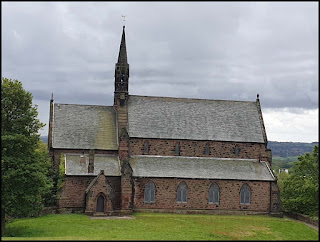 We enjoyed cokes, etc (thanks Jan) before setting off back home by the usual route via Norton Priory and the Trans Pennine Trail.

As is normal on these rides, Richard got a puncture, Paul mended it, and the used inner tube (thorn removed) was passed to me to add to my collection of spare tubes. 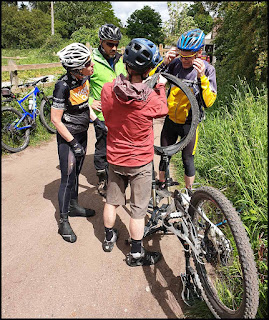 Here’s the route I took. Others will be slightly different. My journey was 67 km with about 300 metres ascent, over a period of over 6 hours. We didn’t rush! 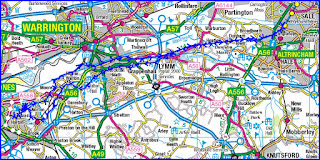 No ride for me next Monday as I have to take Dot to the eye hospital, but others are free to arrange something.

Posted by Phreerunner at 08:27 No comments: