Saturday 23 February 2019 – Wythenshawe parkrun number 379, and a visit to Amsterdam 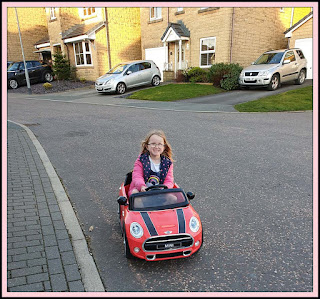 ‘Trouble’ arrived in a Red Mini. And that’s not just the description of her skirt.

The large car drew up on the tarmac.

Yessica, The Beautiful Spy, leapt out and tripped over the kerb. 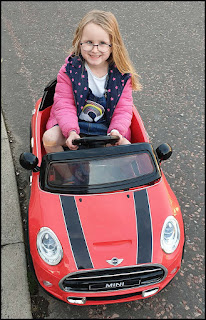 “We are going to Timperley” she cried. In fact, she cried all the way to Timperley. “A World Record” declared Big J.

“We’d better get some exercise”, announced The Boss (aka Yessica, The Beautiful Spy). So everyone leapt into the Mini and bounded off to Wythenshawe, where 299 members of an ancient tribe called “parkrun” were getting ready to perambulate for the 379th time. 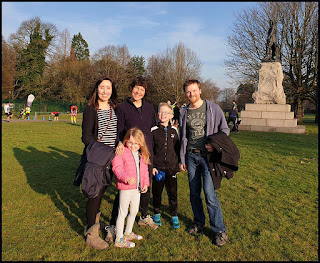 You’ll maybe have guessed, dear reader, that there wasn’t sufficient space in the Mini to accommodate all of this team. But what you don’t know is that the ‘Mad Uncle’ (aka ‘Music Man’) and his Lusty* Companion live just around the corner, so could use shank’s pony to get to Oliver’s statue in Wythenshawe Park.

The weather was fine, the temperature warm, and the going fast, so it wasn’t a surprise that the runner supported by this magnificent team came home amongst the top 105 finishers. Position 103, actually. Full results are here.

Back in the Mini, and under Yessica The Beautiful Spy’s fresh instructions, the adventurous team headed towards Amsterdam, where there are lots of crocuses. 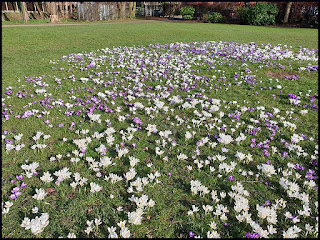 On the way, Big J was reminded about his ‘Compost Project”. 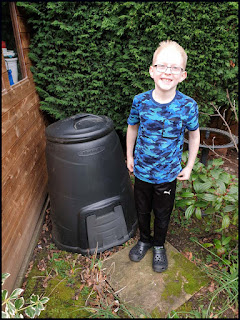 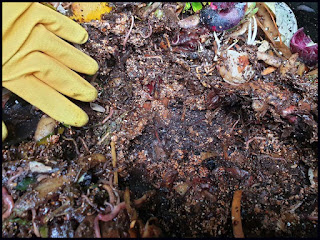 But that’s another story!

Meanwhile, the trip to Amsterdam came to a sudden halt in Walton Park, where the Mini ran out of juice.

“We’ll use these instead!” screamed the dynamic duo. And off they went. After about 30 minutes it occurred to them that whilst this means of transport certainly got some speed up, it didn’t really make much progress towards Amsterdam.

“We are going great” observed Big J, “but this carriage seems to be stuck to the ground!” 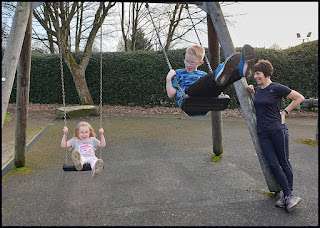 “I give up on you, Big J” announced Yessica, The Beautiful Spy, from the window of her Amsterdam apartment. 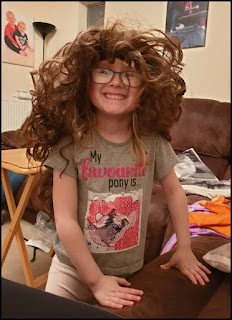 Today, 22 February 2019, was the occasion of Bernie’s funeral, after he sadly lost his battle with pancreatic cancer.

I guess around 250 people attended the funeral in Silsden. There was music, poetry, eulogies, and  - even in church – a slideshow.  A celebration of the life of a memorable character.

There were many past and present TGO Challengers there. I would have liked to have spent more time with numerous old Challenge friends, but I had to leave early for a long-standing commitment. Bernie completed 22 Challenges, starting in the mid 1980s. He and Pauline were the second and third Challengers I encountered after leaving Strathcarron on my first Challenge in 2007.

Sue and I had the privilege of working with Bernie and Pauline for a week at Challenge Control in the Park Hotel in Montrose last year. It was a most enjoyable time, whilst adhering to the serious business of keeping tabs on all those wending their ways across Scotland. Bernie manned the phone for much of the time, and you didn’t have to listen for long to realise his depth of his knowledge and his empathy with those who needed to be ‘nursed’ to their destinations.

Today’s picture was taken on 25 May last year, shortly after Nik Lawcock, pictured grinning at the back of the room, had stumbled into Montrose – just beating the 4pm deadline. A cause for celebration of the success of another TGO Challenge, thanks to the hard work of the organisers, also pictured, and the team at Challenge Control of which Bernie was a key member.

The big man will be greatly missed, and remembered – perhaps especially by those who had to bear the weight of his coffin!
Posted by Phreerunner at 21:31 No comments: 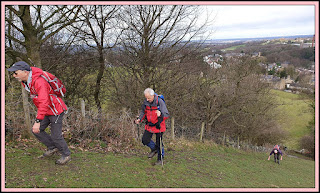 On a day of warm weather (plus 15C as opposed to minus 15C in Ottawa), I was joined by Rick, Graeme and Paul for this pleasant saunter from the Adlington Road car park in Bollington.
The path to White Nancy is steep. Paul habitually zooms ahead, but here he gave the distinct impression that he had forgotten to install his ‘winter tyres’. 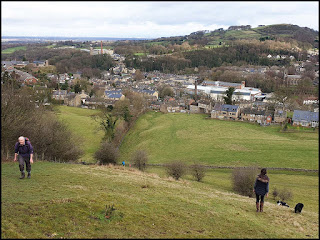 The dog walker knew the route that offered friction. Nevertheless we were soon assembled at White Nancy, having knocked off virtually all the climbing on today’s walk in the first few minutes.

There’s a good view from here to Billinge Hill and beyond – Gritstone Trail country. 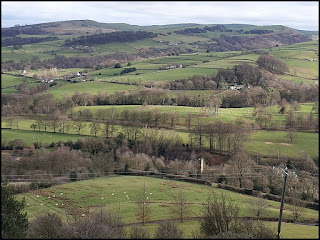 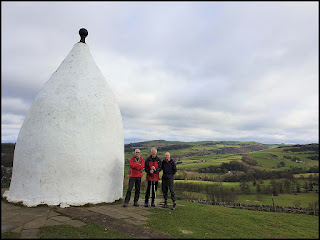 By way of a reminder, not least to myself, here’s what I’ve written about White Nancy in the past:

‘The structure was built in 1817 by John Gaskell junior of North End Farm to commemorate the victory at the Battle of Waterloo.  It originally had an entrance to a single room which was furnished with stone benches and a central round stone table, but the entrance is now blocked. It has been described as a summer house or a folly.

In the mid-1940s, the Royal Signal Corps Trials Unit based at Catterick would apparently drive a truck-mounted dish-shaped transmitter/receiver up to White Nancy, where they tested cathode-ray tube transmission and reception (data-based, not images), to a mobile receiving station on another truck. The receiver would be driven further and further south over time, until eventually the lads at White Nancy were sending a signal to the south coast of the country. Locals told the signallers that the landmark was named after the lead horse that had transported all the materials for the building of the folly.

According to its Wikipedia entry, White Nancy was unpainted until at least 1925, since when it has been painted in a number of different colours over the years, most commonly in white. In 2005 vandals painted it partly in pink. In March 2009 it was repainted in white with the ball finial in black.’

We continued along the Saddle of Kerridge to Kerridge Hill, from where there’s a good view down to the village of Rainow. 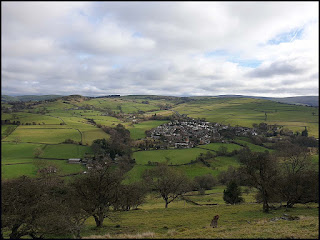 Whilst there are excellent walks to be had by continuing to the end of the ridge before turning to head through Rainow, we chose to pause at the summit of Kerridge Hill – there were good panoramic views on the clear day – before heading down the western slopes to some footpaths across muddy fields leading to the Macclesfield Canal. A tea and banana break was taken en route. 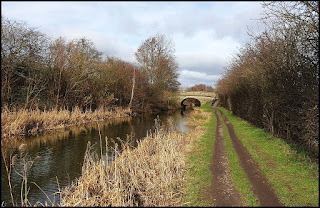 The canal towpath between Macclesfield and Bollington provides very pleasant walking. A fleet of Canada Geese was encountered.

The outskirts of Bollington bring sights of all manner of garden decorations on the east side of the canal. Stone herons jostle for position with plastic pandas. And that’s just the start of it. 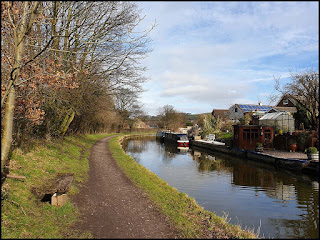 There were numerous patches of gaudy crocuses beside the path. 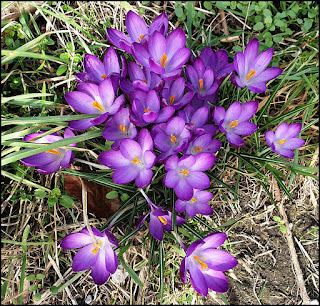 We continued through Bollington to a footbridge that led to an excellent café, shown below with an appropriate icon. Superb carrot cake. 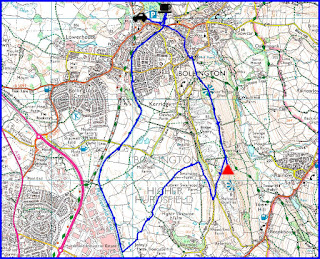 Next week, it’s the Bollin Valley, all welcome:
The Bollin Valley and Ashley. Meet at Bankhall Lane in Hale, near the junction with Ashley Road (SJ 773 858), at 10.15 am (to allow time for a 9.30 tram from Timperley!), for a 13 km outing in pleasant countryside.

Don’t worry, Dot, Sue will take you to your eye appointment.

To view the images at a reasonable resolution, you may have to click on one of them and scroll through the slideshow that appears at the bottom of the screen.
Posted by Phreerunner at 21:33 No comments:

Back by the Bridgewater Canal 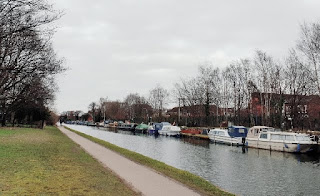 'Home Sweet Home!'
An easy journey saw us leave Ottawa at 21.20 last night and arrive at home before 14.00 today, having lost the five hours that we gained a couple of weeks ago.
Thanks go to Ken and Helen for putting up with us for all that time. We did about 220 km of skiing on the excellent trails, as well as highly enjoyable snowshoeing, fat biking, and more relaxing activities.
Here's to another session next year...
Sadly, on arrival at home we discovered that Mary, one of Dot's very long-term neighbours, died last week. Our sympathy goes to Roger and the rest of the family.
It seems to be one of those bad periods, as TGO Challenge's Bernie, who we worked with last year on Challenge Control, also died whilst we were away. He was a 'Big Man' who will be greatly missed. Our thoughts are with Pauline and the rest of the family.
Posted by Phreerunner at 20:17 No comments: 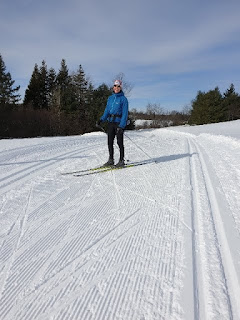 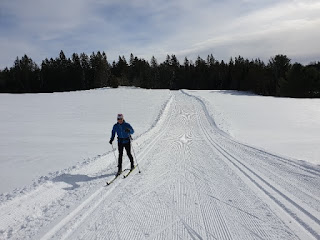 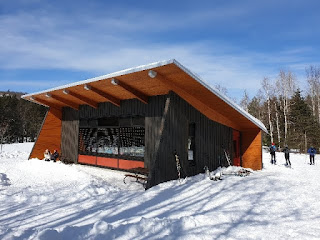 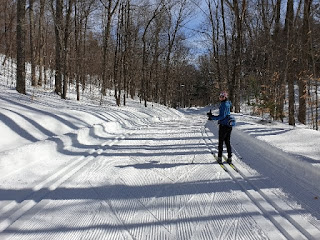 Today's route:
P17 (Wakefield) > #53 > Philippe > #50 > #55 > Renaud cabin (lunch) > #55 > #50 > #52 > #53 > P17. 25km.
Another lovely sunny day, around a manageable minus 12°C. Just Sue and me and a few other people on the trails, including a procession of lone women at 1km intervals on #52, which we'd not skied from the south before. I think I prefer it from the north.
A flock of Evening Grosbeak birds took over the Renaud feeder for a while.
Today's first two pictures were taken from the same spot on trail 53, on one of the few open sections of trail in the park. The third picture is a reminder of what Renaud cabin looks like, and the final one shows Sue on a typical trail - #50 in this case.
Sue also took photos today - I'll try to post a few when we get home.
Posted by Phreerunner at 20:48 No comments: 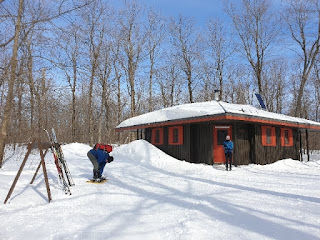 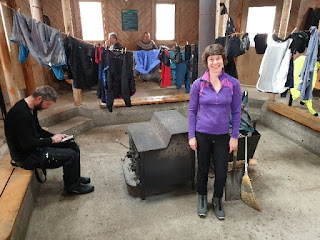 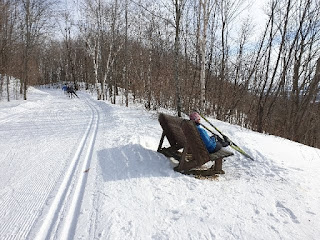 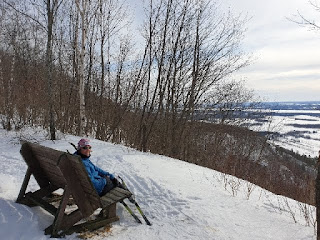 Ken left early to do the 'Freestyle' Loppet - another 51km skiing for him - this time in 4 hours 30 minutes.
Helen would have joined us today, but sadly one of her former colleagues died last week and the funeral takes place over today and tomorrow. A shame.
Sue and I drove to P12 car park by Lac Meech and enjoyed the route detailed below. This starts with a long 3km ascent to Ridge Road. It was a lovely sunny morning, but cold - around minus 14°C. My electric mitts did the trick and kept my hands warm, but I didn't risk taking my gloves off to take photos until we reached McKinstry cabin after about 10km.
Conditions were pretty much perfect for our ski onwards to the fire tower that marks the terminus of Ridge Road. We arrived there just as a snowshoer appeared from another direction, and we watched three 'dudes' scoffing their lunch. Between them they had downhill skies, snowshoes, and a snowboard.
We returned to McKinstry for our own lunch - it was now busy, having been completely empty when we went past on our way to the fire tower.
It was a most pleasurable ski back to P12, this time via trail 24. The last 3km comprises fast, swooping descent tracks back to the car park. Great fun in today's easy conditions.
En route, Sue took a breather on Ridge Road at a bench that overlooks the Ottawa River valley. She took some good photos today. I'll try to post some of them when we get home.
Our route, for the record:
P12 > #40 > #1 > Fire Tower > McKinstry cabin > #1 > #24 > #40 > P12. 27km.
Posted by Phreerunner at 22:16 No comments: