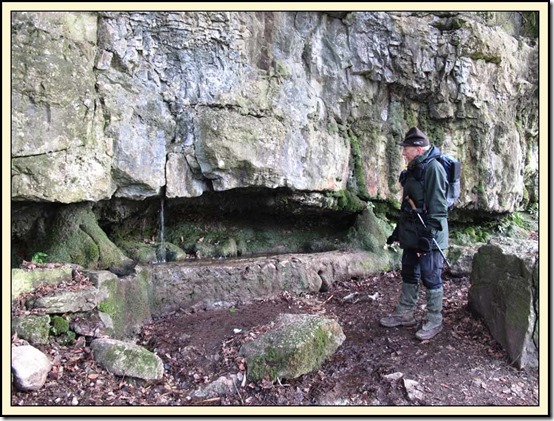 After some gloriously sunny days, East Lancs LDWA’s Plodders (and friends) chose a rather overcast day for this entertaining stroll, featuring the wells of Silverdale.

A new technique of leadership was deployed for this walk. With everyone having been handed the route sheet shown below, I was able to select victims leaders at random to try to navigate our way from point to point, so I’ve retained the waypoint numbers in this write up. 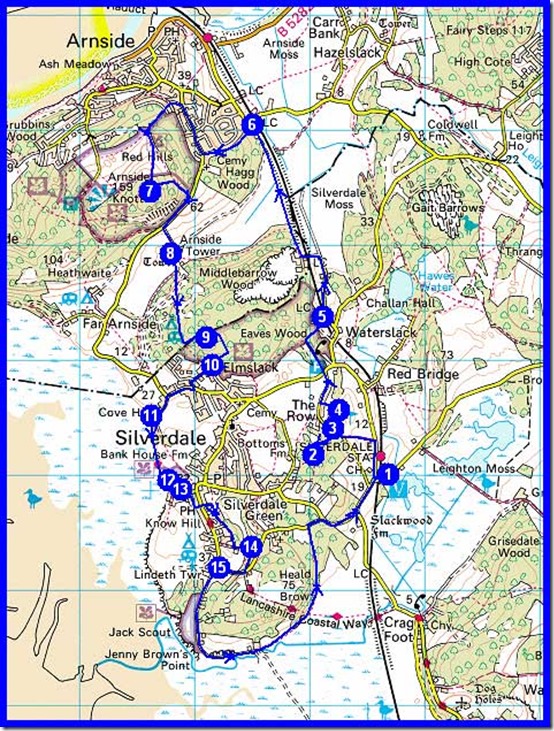 1. Leighton Moss RSPB Visitor Centre.  After some of us had suitably refreshed ourselves in the café, we set off more or less on time at 10.30, the obligatory photo shoot causing some amusement to passers by in the busy car park. 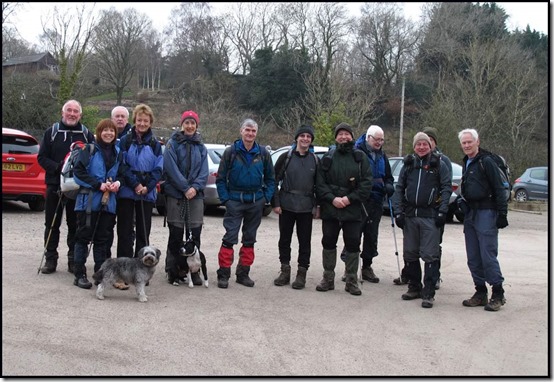 2. Burton Well supplied water to the people of Silverdale Green for many years, before the roofs of the houses were fitted with gutters and downpipes to collect rainwater, which was stored in tanks. These were in cellars, with hand pumps being used to deliver the water to the kitchen. By then the wells were only used in times of drought, when water carts were used for house to house deliveries.

Our efforts to find Burton Well were hampered by my indecision in choosing a volunteer to lead this section, and having no idea of the route to it myself we finished up in a bit of a pathetic huddle after a while.  When the well did eventually appear (by accident, I fear) it revealed itself as quite a substantial basin surrounded by a slippery brick wall, from which I nearly made a spectacular dive!

(Photos are in the slideshow – there’s a link later.)

Returning across Lambert's Meadow and over a wooden bridge, we reached an area situated between wooded outcrops of limestone. The northern part of the meadow is dominated by rushes, but the southern area has richer flora and is richly populated by insects in the summer. Once back at the road, on the left hand side is a damp hollow now largely overgrown with trees. The water flowing from Bank's Well has formed a small pond here, in a saucer shaped depression probably lined with impermeable loess.

Roger was now, by popular demand, elected leader for the journey to point 4.  “Where’s the path?” he ejaculated.  In this case the route designer had cunningly made the navigation harder by smothering the path with an ocean of ‘Anquet blue’.

However, Roger soon discovered that opposite the pond, a track runs behind houses for 200 yards to reach a pile of stones on the left. If visiting on a night ramble, you may witness a bouncy campervan in this vicinity! At the pile of stones, a hole of about 8 feet has been dug to reach a perched water table. This forms Silverdale's only true well. It supplied water to nearby cottages until 1938, when it was succeeded by a pipe from the aqueduct from Haweswater to Manchester.  Otis and Maude had to be persuaded to show interest… 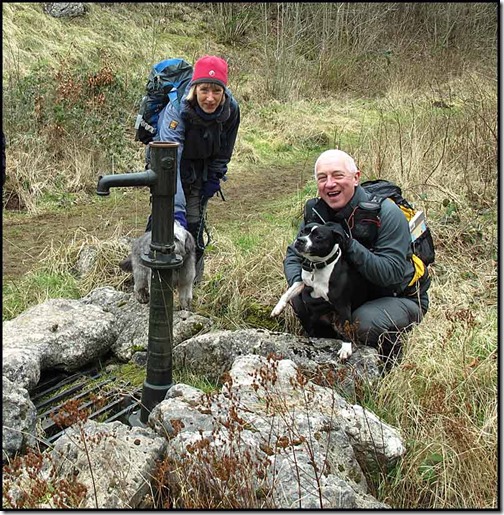 5. Eaves Wood. The other side of a minor road, a path leads into Eaves Wood and across the railway, where Bernard led us confidently up what I thought was the wrong road.  It turned out to be the right road.

6. Hagg Wood. After re-crossing the railway and dodging trains for the second time, we came upon the giant Middlebarrow Wood quarry, where a splinter group in need of a comfort break was almost followed by the entire party.  A dampish path then led towards Arnside, passing to the right of Hagg Wood despite Bernard’s inclination to turn left towards Arnside Tower.  “Later Bernard, later!”

7. Arnside Knott. The suburban streets of Arnside, past Conrad’s house but we decided to spare him the stress of an unplanned visit by eleven strangers, (this was the first time Conrad, a fellow blogger, had met any of us) gave way to a steep haul that some Plodders may have found rather demanding if we hadn’t almost fully circled the hill on gently rising slopes before popping out near the top.

Lunch was taken. (I must apologise for the lack of an elevenses stop. “Sack the leader” would have been chorused if anyone had known who the leader was at the time.)  Cake was provided. 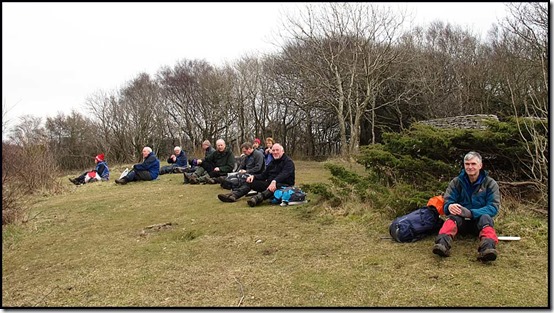 A little further on, Conrad completed his leadership duties by duly delivering us to the 159 metre summit of Arnside Knott.   We had paused along the way to admire the knotted tree that used to be much bigger, and to enjoy the unfolding views of Morecambe Bay, the Lake District and the Yorkshire Dales.  Insofar as they could be seen through the thick cloud that made this lower summit a place of preference today. 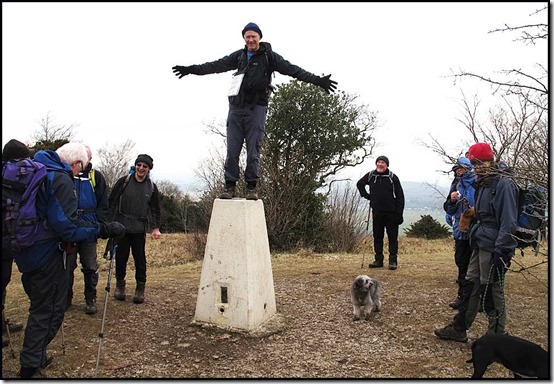 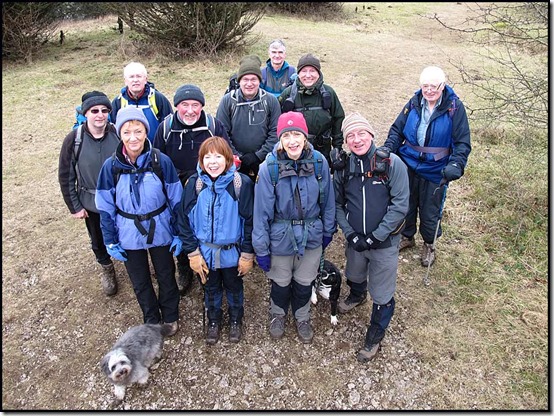 We enjoyed our time on the summit, but on leaving it I looked backed to this ghostly sight of a schizophrenic plumber who thinks he’s a barber.  Time to leave! 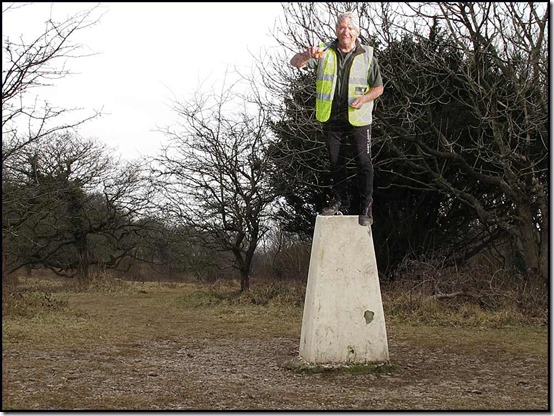 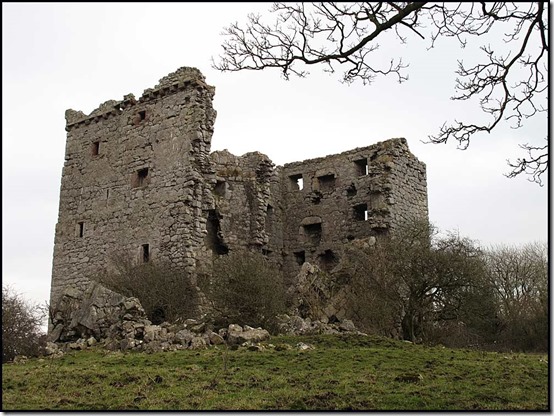 Walking aids mere deployed by those recuperating from surgery etc* for the steep descent to another minor road, and gently on to Arnside Tower which due to its bulk meant that Roger could again be placed in charge without fear of a myopic error. This prominent ruin is the largest of the pele towers in the district. It was built in C15 as a defence against the Marauding Scots (not you, Hilary). A corner fell off in 1884, since when I’d been told that H&S fears had led to an embargo on entry, but Don assured me that he had climbed it more recently than in 1884, when he was only a nipper.

I’d never before visited this small obelisk on the flat area above Silverdale Jungle. It overlooks Silverdale and was built around 1887 to commemorate Queen Victoria's Golden Jubilee. 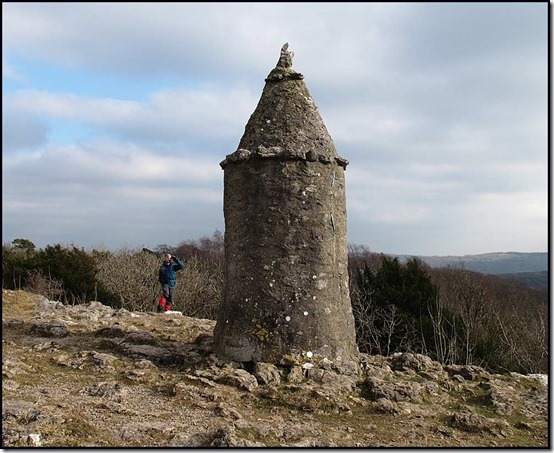 It took a bit of finding, but after passing through the extensive grounds of Holgates camp site we took a left beside a wall boundary and eventually came out at the obelisk, half expecting to see Norman sitting on top of it.

After descending uncertainly (due to too many path choices) to the track that runs around the lower perimeter of Eaves Wood, a right turn took us to Elmslack Well, situated, to Allan’s surprise, behind a litter bin! 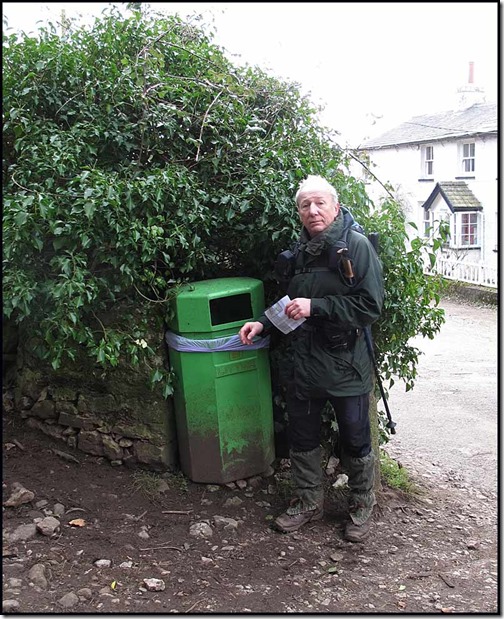 Cove Well is shown on the map, but if you can find it you've achieved the impossible.  This group of Plodders, led by someone good at reading signposts who said “I’ll do 10 to 11”, strode past it with hardly a glance at the thirsty alpacas, who I blame for drying up the well.

However, around the base of the cliff to the left, a small depression in the salt marsh marks the spot of another spring which rises after heavy rain, producing a jet of water of up to 3 feet. This spring arises from the main water table, as opposed to perched water tables from which the other springs arise.

It hasn’t rained recently.  There was no jet of water.

There's a cave at the cove, formed by groundwater circulation. Nancy and I explored it.  It didn’t take long.  Nearby, Red Rake is a prominent vein of red rock running through the limestone cliff to the south. Iron ore was mined here, but the roof of the workings has long since collapsed.

12. Bard's Well. The shoreline route leads to Bard's Well, on the edge of the car park. This was also known as Battling Stone Well, as clothes were washed here and beaten clean against the stones. It stops flowing in dry weather, so its location remains a puzzle to me.  There’s an alternative field route here, as the beach can be tricky when the tide’s in - the first field has never been fertilised and supports a rich variety of flora.  Worth a look in the summer.

13. The Silverdale Hotel is a place of refreshment, but as we passed by at 3pm, and we still had dregs in our flasks, its services were not called upon today. 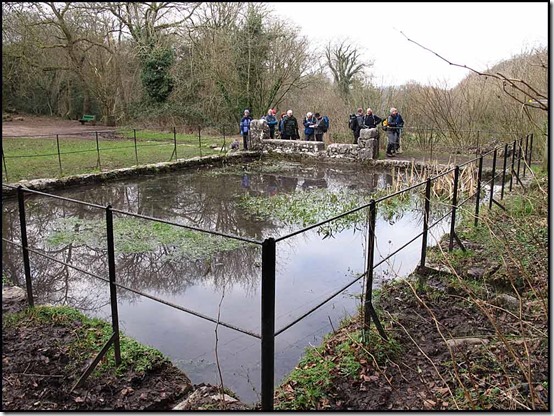 A selection of routes (this is Silverdale, there's always a choice) leads to Wood Well, where the water drips from the roof of a small recess in the base of the cliff (see header picture) and is collected in a small trough from which it flows into the large basin pictured above, used originally for watering cattle.  Conrad told us that hawfinches and firecrests can sometimes be seen near here.

15. The Wolf House Gallery. This is a good place to stop, but we weren’t expecting it to be open today, so the fact that it was open took us by surprise.  We headed instead towards the attractions of nearby Gibraltar Farm. 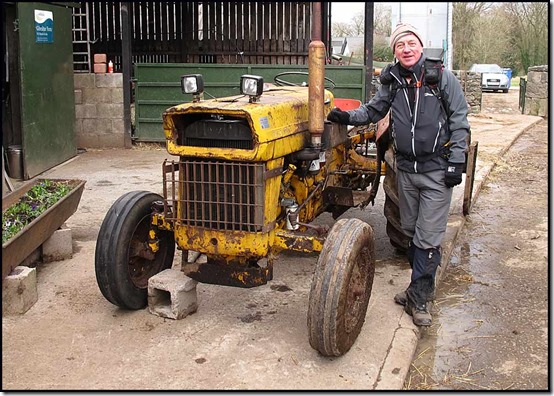 From here, a pleasant lane and some coastal paths lead to Cow's Mouth and Jack Scout, where a ruined lime kiln has been restored. Giant's Seat, a large slab of limestone may, if we’d found it, have proved irresistible, so I made no attempt today to locate it.  Instead, we all stumbled along at our own pace before reconvening at the prominent chimney that is all that is left of the copper smelting mill at Jenny Brown's Point, just beyond Brown's Cottages. Birds foraged in the quicksand as we continued on our way beside the estuary. 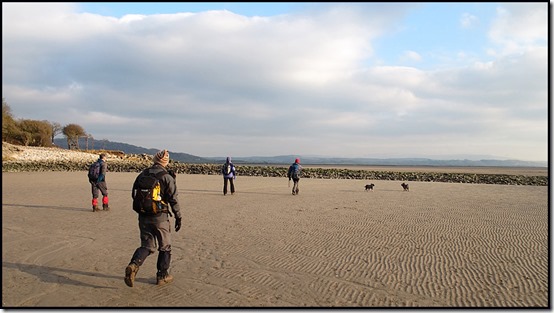 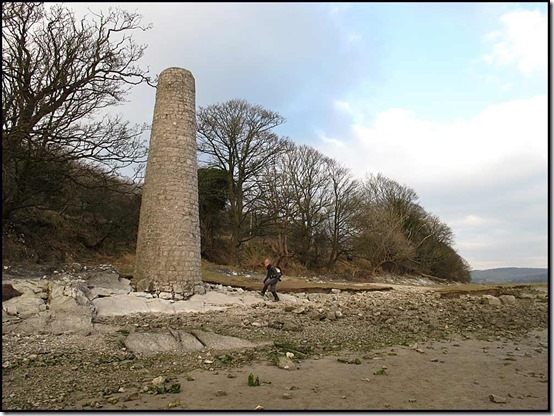 By now, a low sun kept peeking from below the clouds, and despite a keen breeze it was a delightful walk back to Leighton Moss beside the salt marsh on which I once saw a flock of spoonbills. 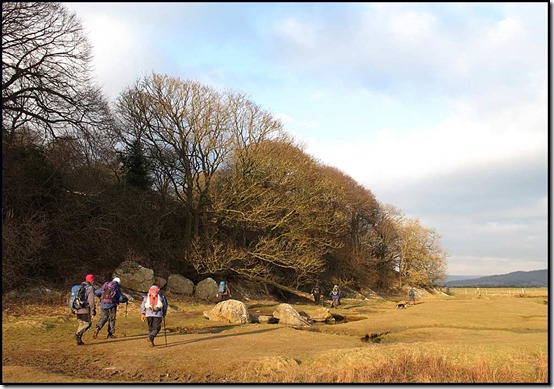 The walk turned out to be about 19 km (12 miles) with 400 metres ascent, taking less than 6 hours at a very leisurely pace.

Alan R has reported here, and has promised to compile a more considered version from his deck chair in Spain, based on a play on the word ‘Well’.  We’ll see about that…

Conrad has reported here during a brief perambulatory pause.  I’m glad you liked the brownies, Conrad – I should have brought more!

I took quite a few pictures, some of which are available for viewing here.

What a lovely day out.  Thanks for your company, everyone.  My fourth and final plod of this little series of walks is on 6 March, starting in Culcheth, after which Reg resumes his rightful position at the head of the crocodile in Bury on 20 March.

I’m also walking around Bollington (1 March), Alderley (22 March) and I’m repeating the Roaches walk we did in October 2012, on Monday 25 March, by special request from Don, so please do feel free to join us on that walk in particular, which this time will start from the Roaches.  Details of all these walks are here.

* For ‘Plodders’ perhaps read ‘cripples’.  Don and Bernard have recently broken ankles, Conrad has a new knee, and countless others have serious back problems!