During last year's TGO Challenge walk we were fortunate enough to meet that Crazy Austrian, Markus.  Perhaps foolishly, Markus had mentioned "Our family has access to a 'Ritzy Shack' in the Vorarlberg - you are invited to visit sometime."

You know, the sort of throw away comment that usually comes to nought.

So this weekend we were honoured to be guests of Markus, his brother Wolfgang and W's fiancée Jutta, at said Ritzy Shack.  We were joined there by Muck, a pure bred avalanche rescue dog, borrowed from friends for the weekend.

There should be a little video in the next posting that provides a timeline for the weekend, which basically comprised flying to Friedrichshafen, from where Markus whisked us to Dornbirn for breakfast and provisioning.

Then we set off from his flat, via bus and track towards the Ritzy Shack (aka Untersehrenalpe 1297 metres).  After a short distance snowshoes or skis became essential to onward progress, and the Shack was somewhat buried in a snowdrift. 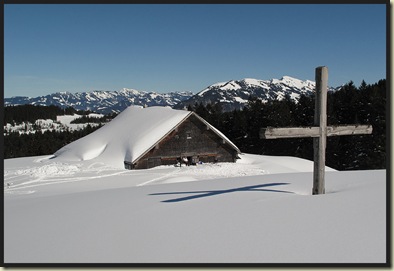 We settled in and enjoyed a fine sunset. 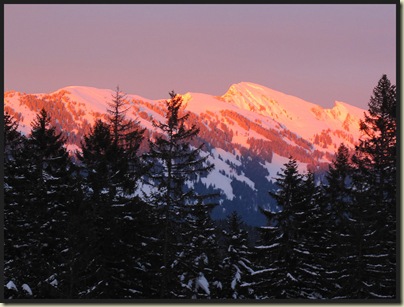 Saturday was a beautiful day for two short walks - snowshoes again essential.  Our limit was 1600 metres, above which despite the presence of Muck, avalanche danger inhibited further progress. 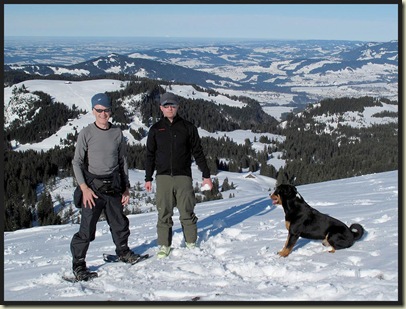 Catering was excellent, with Markus serving spätzle on Friday and Wolfgang providing an Indian curry on Saturday. 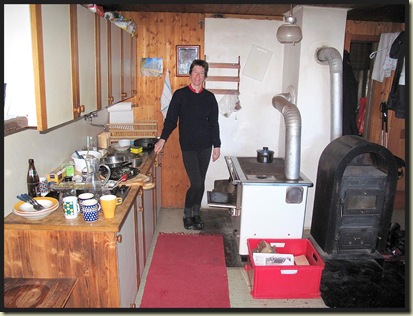 Sue and I had the honour of a bed in the living room (which is also the kitchen - see above) whilst the others slept upstairs.  They tried to anyway, despite being frequently disturbed by an avalanche rescue dog intent on throwing himself downstairs in his bid to dig more holes in the snow. 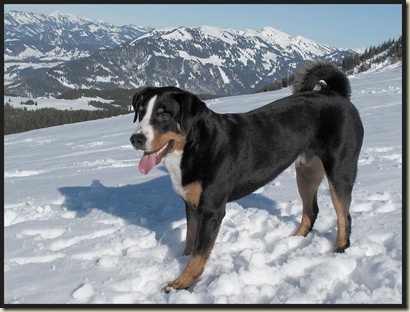 Sunday brought increasing cloud cover whilst Sue and I repeated our walk up to 1600 metres - it was a TGO Challenge high altitude training camp, after all! - with the indomitable Muck as our guide.  Here is a view down to the 'Shack', some 300 metres below us. 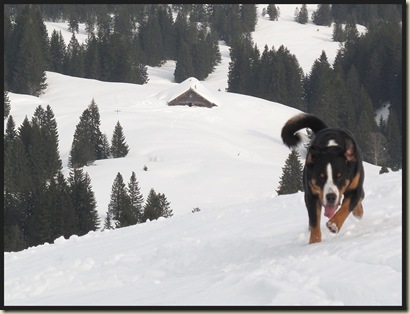 Then we sadly said goodbye to the Shack and descended over 500 metres to a roadhead where Wolfgang had parked his car.  Sue and I were very impressed by the skills of the others as they skied down the final section - a half iced frozen road below the point shown below.  We were glad of the teeth under our snowshoes. 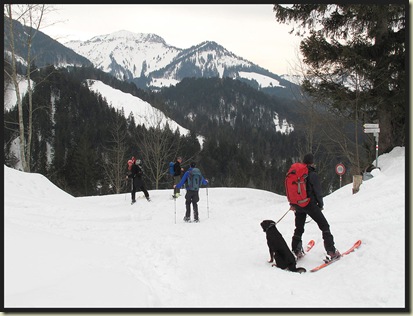 Showers at Markus's flat helped make us presentable for an excellent nosh at Gemsle Gastronomie restaurant.  It was 'bonfire night' - 1 March is a day of celebration in Austria as it is supposed to herald the onset of spring.  We all watched from the window as tall fires topped by burning witches lit the hillside.  All of us except Muck, that is - he had been returned home to boss over a brood of cats.

The stroll back to the flat was enlivened by the finale of a nearby firework display, then we were left to wreck Markus's home whilst he unknowingly parked himself elsewhere.  Actually, before we wrecked his plumbing, we enjoyed his impressive library of UK walking books, and admired his TGO Challenge file.  He started doing the Challenge in 2004 and this year's will be Markus's fifth trip - he remains the only Austrian Challenger.  Both Sue and I enjoyed a read of Bob Cartwright's report on his first crossing, also in 2004, the only third party report on Markus's file.

Monday morning saw Markus arrive with breakfast after a lie in, before he escorted us to the railway station and dispatched us to Lindau for the day whilst he returned home to rescue his flat from our sewage.

Here's Lindau's port entrance, with its lighthouse and Bavarian lion. 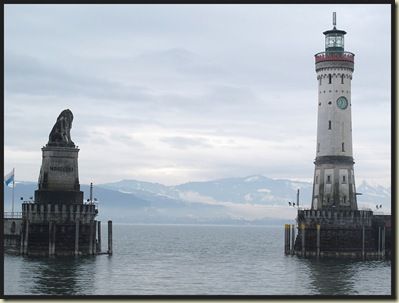 This ancient island town, over the border in Germany, proved an excellent place to enjoy a drizzly Monday, whilst Markus wrestled with his plumbing before collecting us after our 20 minute train ride back to Dornbirn and feeding us with a tasty risotto.  Luckily we had with us the en-suite camp toilet that we carry on the TGO Challenge, and this came in very handy given the ongoing plumbing crisis.

Here's the front of one of Lindau's many fine buildings, the Town Hall. 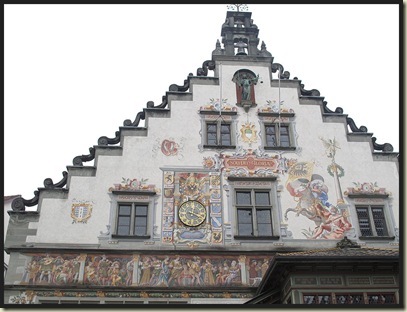 Then it was back to the airport for an efficient journey home.

A most satisfying trip, well worth the effort, and great to spend the weekend in such fine company.

Thank you Markus, Wolfgang, Jutta and Muck, for your excellent hospitality.  Here we are, enjoying our time in the Ritzy Shack. 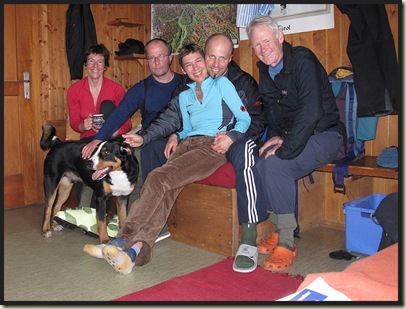 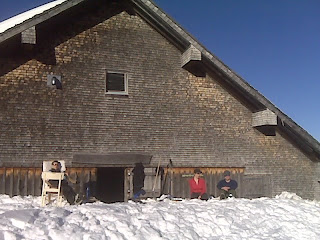 Sent using BlackBerry® from Orange (subject to minor technical problems, hence the delay!)
Posted by Phreerunner at 02:31 No comments: