A Caledonian Trail, with Markus Petter 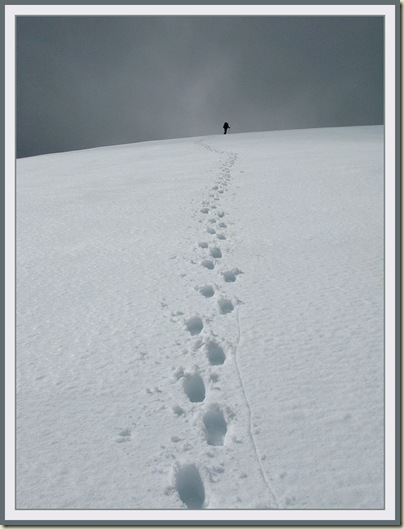 During the depths of the long winter that has now burst into Spring, a somnolent Austrian, unable due to work commitments to take his usual place on the TGO Challenge, busied himself by poring over maps of Scotland.  He devised a trek from Cramond, which some may argue is not a suburb of Edinburgh, to Cape Wrath, which is about as far as you can go in that direction.

It is a tough route, but Markus is a tough chap.  He is up for the Challenge.

By popular request I have put details of Markus’s route on a web page here.  He has promised to let me know how he is getting on, so that the ‘Actual’ rows strategically placed below each day’s route description do not remain forever blank.

He last reported in on his journey from Dornbirn to Munich, from where his journey deposits him in Edinburgh this evening.

So he should be making his way from a plush Edinburgh hotel to Cramond during the course of tomorrow morning, to start his very own ‘Caledonian Trail’.

[The above image shows the view I expect to have of Markus for a few days after I join him at Aberfeldy on ‘Day 6’.  I must be mad!]

That is a fine walk he has planned. Enjoy the time on the trail with him.

Hi Martin, Thanks for the hard work you have been doing with the itinerary.
Looks challenging to say the least. I hope the weather stays better than forecast.
Some areas i am familiar with and some i have never been to at all.
It seems to me that the re-fueling and food gathering points are quite far apart.
What is the strategy regarding this?
Having walked the northerly 3/4 of the Cape Wrath Trail i know how difficult this can become when you are a foot soldier.

Alan, Markus's route looks ok to me for resupply points, especially if he has sent packages to Achnasheen and Kylesku, in which case he only has to carry supplies for a maximum of 3 days. Otherwise it's only 5-6 days, of which he is well capable, especially as there are 'tea shops' en route for those sections (Fort Aggie to Ullapool, and Ullapool to Durness) and he will probably be staying in a couple of hotels on those stints.
I agree, it's an excellent route, if a bit stingy on summits!

That's a great walk Martin. Markus has a gorgeous route though the far north-west. Fingers crossed for good weather for him!

I'm looking forward to hearing how Markus does.

Yes, if he has sent food packages on then 5/6 days is well ok. I'm sure you will both enjoy the trip.
(Nice hotel in Durness) Stayed there one night after finishing the trail. (A bit pricey though). Geared to Fly fishermen as i recall.

Markus has found an excellent antidote to being unable to do the TGOC this year because of work commitments.
It remains to be seen how effective he is at communicating his 'blog', which will enable his progress to be charted on the web page I prepared yesterday.
But I can report that he is "on my way to Cramond" this morning. I hope he's better prepared than me. I still have to sort supplies and gear, also for the TGO trip as I hope to drop off some supplies on Friday.

Be careful with hotels at Durness:

I stayed there many years ago with a load of fishermen and Navy Divers and so when I pitched up there in 2007 I naturally assumed it would still be a hotel....

Alan/Martin.
The Cape Wrath Hotel was being done up again as a hotel (2009). If it has opened up again, i don't know, and the web page is a bit vague also.
But i'm sure Markus would have checked this out if he was planning to stay there. And there are other options.

Very helpful comments, Alans, but Markus plans to camp at Durness. The Youth Hostel (£15) shouldn't be fully booked, if he decides on a roof.

Hi Martin,
Thanks for sending me Markus's route and I'll follow his progress with some interest. I'll miss the last bit because we'll be in Knoydart when he's approaching Sandwood Bay. Give him my regards when you meet up.
Gordon.

Maybe if he passes the CWH he could blog what the current situation is, for future endeavours.
I always like to finish a trek with a bit of luxury.
I could possibly use some deodorant as well Alan! You never know. Hm