It’s traditional for me to organise a ‘Christmas Walk’ at this time of the year, involving a long lunch stop at a suitable hostelry.

This year I left it very late to organise, but that didn’t seem to matter as the turnout of thirty people was our best ever, and the route and hostelry turned out to be well chosen.

Friends turned up from far and wide – from Wokingham to Preston and Liverpool (some of whom we hadn’t seen since last year’s Christmas Walk), so the choice of the large lay-by on the A515 just south of Rivendale Caravan Park turned out to be a good rendezvous point.

Despite much chatting and exchanging of Christmas cards, car keys being lost and found, boots and gaiters being donned, etc, etc, at 10am we set off on a cloudy morning, bang on time, thereby blowing my expected timings by a good fifteen minutes.

After a short spell on the windswept, and pretty cool (in a cold sort of way) and exposed trackbed of the Buxton to Ashbourne railway line, now known as the Tissington Trail, we deserted the firm surface in favour of softer going through some well hydrated fields.

Those pictured above are strolling unknowingly towards a sharp descent to the River Dove.  It’s slithery and boggy at this time of year, so it was a relief to be able to survey  my charges from a precarious branch and discover that I was probably the only one of us who had attempted to go bog-diving. 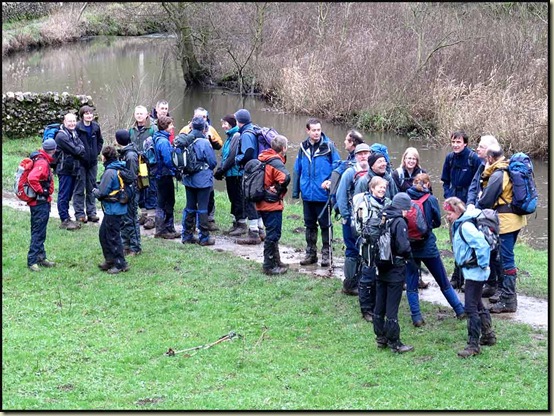 A shower commenced.  Waterproofs were scrambled from the depths of rucksacks amid gasps of surprise that it should be so inclement on one of my walks, which are renowned for their sunny ambience.

A sudden gust distracted us. 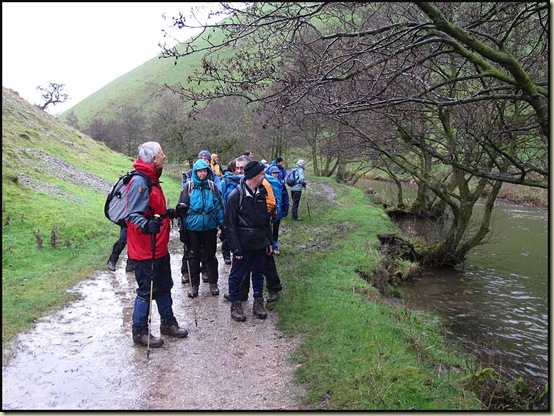 This heron had flapped in for its lunch. 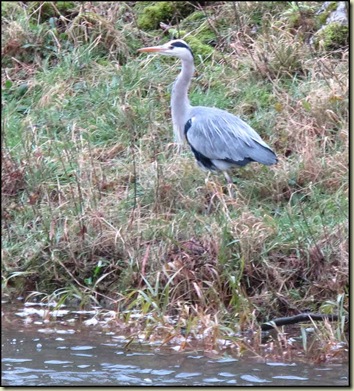 The others were engrossed with watching the heron, but I spotted a tree creeper and looked up to spy …. sunshine? 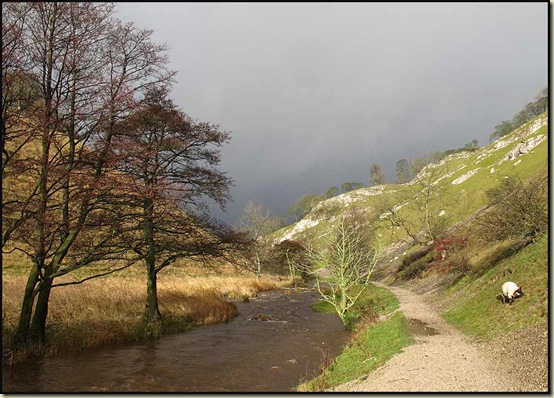 It didn’t last for long.  I think most others missed it!

We paused for tea, coffee, shortbread and brownies – plenty for everyone, luckily, but no photos as that black cloud got us.

We continued on along Wolfscote Dale.  It was quite muddy.  Most places in the Peak District are muddy just now. 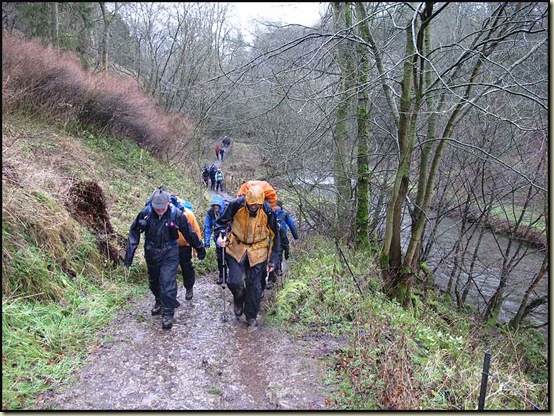 By and by we reached our lunch stop.  Half an hour early.  The Charles Cotton Hotel*. 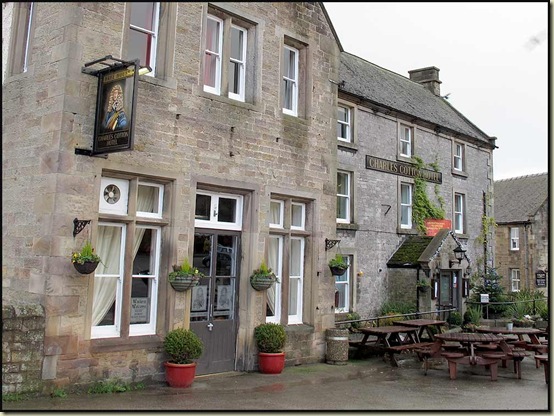 I thought we’d have to wait for our lunch, which had been pre ordered from their excellent Christmas menu.  But the operation was as slick as I’ve seen on such an occasion.  They were happy to serve us as soon as we were ready to eat.

Really excellent service – here are just a few of us pausing between courses.  The steamed up windows behind us mask a downpour. 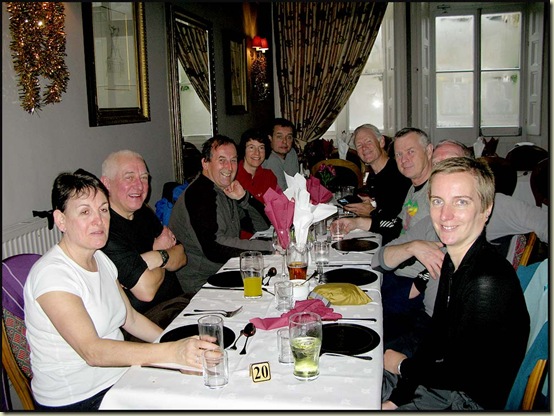 After a few stern words with The Boss, and a carefully cast spell, I popped out to test that it had brought the desired effect.  Success! 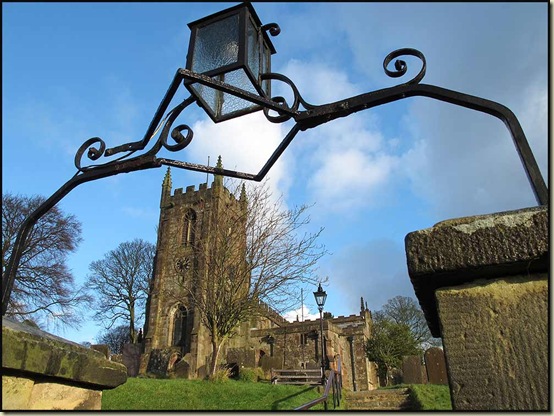 But by the time everyone had ‘booted up’, the spell was diminished, if not broken.  At least the rain didn’t return until the moment we set off for home in the cars.

Meanwhile, these onlookers may have had wet feet…. 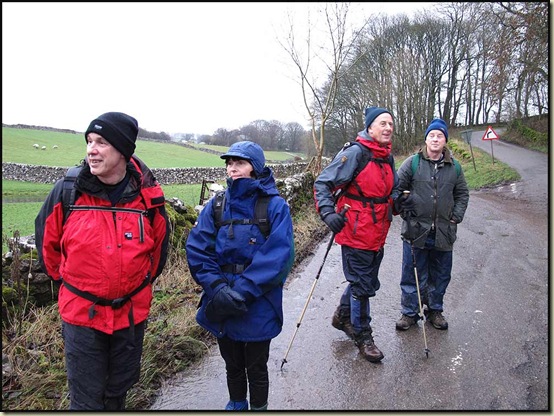 …as the road had flooded at Dale End. 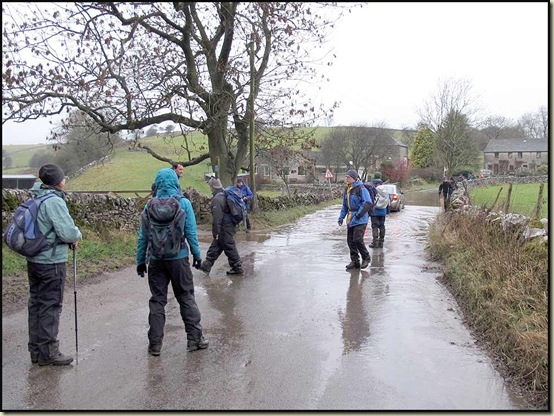 A right turn beyond the church in Biggin led us past a camp site and into fields, where much to our surprise the season’s lambing had started.  This one had clearly only just been born. 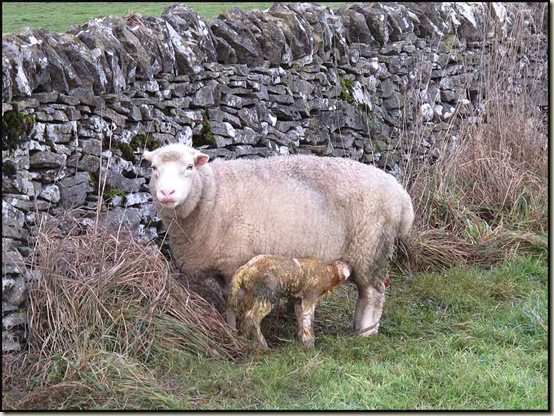 The final ascent of the day took us up the railway embankment built by the London & North Western Railway Company, and onto the track that was opened for trains in 1899.  Expresses from Manchester to London used to fly down this line, and until after the Second World War there was a daily delivery of Peak District milk to London. 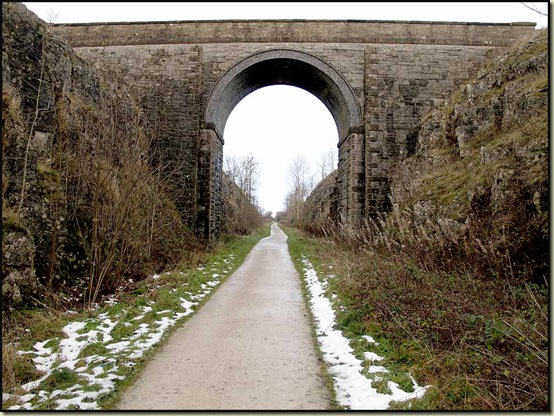 The line was closed in the 1960s, following which the trackbed was removed and the route was converted into a trail for walkers, cyclists and horse riders. The experimental scheme was one of the first of its type, and since opening to the public in June 1971 it has been a great success.

As soon as we stepped off the bright track surface we realised it was almost dark – but torches weren’t required for the last few metres back into our lay-by, and at around 4pm we all said our farewells and pottered off to our respective homes, leaving Don with a recalcitrant car seat that probably crippled him on the drive back to Preston.  We hope you got home ok, Don, albeit perhaps with a modicum of spinal damage.

Readers may have noticed a little ‘poetic license’ in this report.  If not, you certainly will if you view the slideshow – it has a few more images taken on this route, which is shown below – 16km with about 280 metres ascent.

For a more accurate report, see Alan R’s excellent version of events, ‘The Invasion of Hartington’ or Gayle’s unstintingly precise recollection of ‘Martin & Sue’s Christmas Walk’.  The slideshow is here. 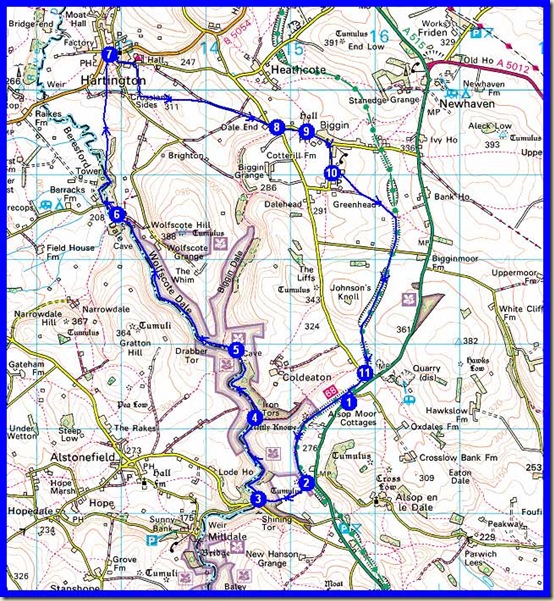 There’s a bit more information on my ‘planning’ page, here.

* Here’s what Alan R discovered about Charles Cotton – I hope you don’t mind me using this, Alan:

“Charles Cotton ( April 28, 1630 – February 16, 1687), lived at Beresford Hall, now demolished, wrote, with his great friend Izaak Walton, a remarkable book about 17th century rural England called ‘The Compleat Angler’. No other English language book, other than the Bible and Book of Common Prayer, has been reprinted more times. He shared his time between an extravagant life style in London society with the quieter pleasures of his home and the Peak District. That is when his creditors were not chasing him - then it is said he hid in a cave in Beresford Dale. The fishing lodge he built still remains on private land in Beresford Dale, but can be seen from a distance when approaching the dale.”

A picture in the ladies powder room illustrates the perils of ‘Fly’ fishing – Both Alan and Gayle feature that in their blog postings.

Finally, in answer to Gayle’s ‘Same again next year?’ question, the answer is yes, on Sunday 16 December 2012 (unless there is overwhelming demand for 9 December).  The Charles Cotton Hotel performed so well that I think we should, subject to cost, return there, but perhaps start from Longnor (though this year’s route can’t really be bettered).  If anyone has strong views, let me know. 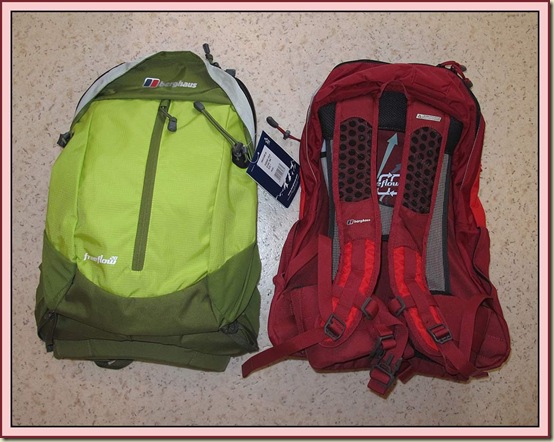 A couple of rucksacks have arrived from Berghaus.

Pictured above, they are Freeflow 20 day sacks, featuring Berghaus’s Freeflow IV backsystem, breathable shoulder straps and a front pocket that doubles as a 2 litre hydration reservoir pouch.  The swing tags also broadcast an ‘integrated raincover that is stowed away in the top lid’.  This must be a secret pocket that I can’t find, and as the rucksacks don’t have a lid as such I would recommend the use of a waterproof liner such as a 22 litre one from Bob and Rose.

These look to be excellent little day sacks, made from Ardura 420D fabric and weighing in at just under 900 grammes.  I see lots of them in use on the trails.  The size is a bit small for all the junk I tend to carry around, so I’ve found a couple of grateful recipients who will report back on their performance in due course.  Thanks Jenny and Sue.

The Freeflow 20 retails at around £55 from Berghaus, but costs rather less from numerous retailers.  The current specification is here.

The full range of Berghaus daysacks is here, and their larger packs are here, available from many sources. 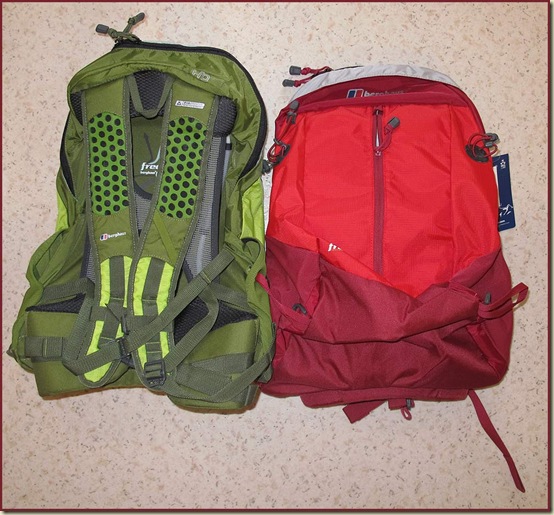 Sue’s Review (September 2012):
The hip (waist) belt was too high, and the fit of the shoulder straps was too tight for Sue’s broad shoulders.  The capacity was limited, so this wasn’t really for Sue, who can fit almost as many contents more comfortably into her bum bag.

Jenny’s Review (June 2012):
The shoulder straps and waist straps are substantial and provide quite a bit of support, all easily adjustable to suit.
The 'freeflow ventilation back system' (their words!) is impressive and certainly keeps the rucksack off your back.
I also liked the fact that you can fix (two) walking poles to the outside of the rucksack, I didn't end up using my poles but it was good to be able to take them with me for one or two of the walks, just in case.
However, all the 'technology' described above did seem a little over the top for such a small rucksack - you really can't fit much into it, so one wonders about the need for substantial (and a little bulky) shoulder and waist straps and the freeflow system. I also found the lack of smaller zip pockets to be a disadvantage - e.g. somewhere to zip in your camera rather than delving into the main bag. There are side pockets for water bottles, which is good, but it would have been nice to have the opportunity to zip them up or velcro them, for extra security - I wouldn't use them for anything other than bottles or tissues or the like. There is a section at the front for storage, but I found that once you had put your summer waterproofs, camera, etc into the main part of the bag, this section could hold very little.
So, overall I found the rucksack comfortable to carry, with some useful features such as the walking pole straps (or whatever you call them), but I thought the freeflow system could have been reduced a bit in order to allow a little more storage capacity/variety.