Thursday 29 August 2013 – An Evening Stroll from the Harp Inn 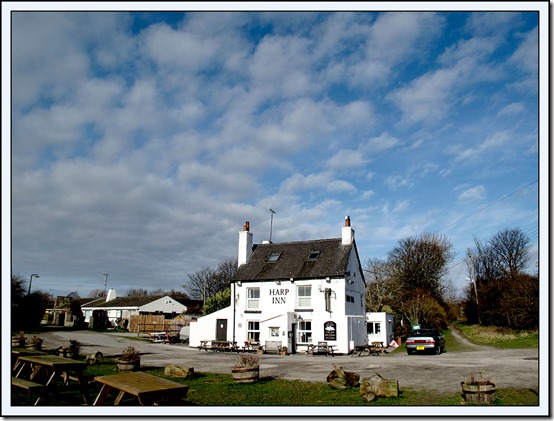 It didn’t look quite like this photo taken in March 2011, but the weather was fine and warm for this last ‘daylight’ evening walk of the season.  It was just that I was so pleased that Andrew and Judith had turned up for a walk on which we had expected no company that I forgot to take any photos until it got dark.

This is an area rich with history and wildlife, as described in more detail in my entry from March 2011.

Today, from the benches pictured, a bird of prey could be seen along the shore towards Neston, engaged in a contretemps with a crow.  This brought a number of complete strangers into animated conversation, and as we had brought along both binoculars and Tony Bowerman’s excellent books, it didn’t take long to establish that the bird was a Hen Harrier.  Several people scribbled ‘Tony Bowerman’ on scraps of paper – I hope their searches for his out of print books bear fruit.

I didn’t get a chance to chat much to Judith after this year’s TGO Challenge, on which she only bumped into two other Challengers before entering the ruckus at Montrose, so it was good to catch up.  Her Challenge reports are here – a good read.  Had she been on her own tonight, Judith would perhaps have been shunned, as she was sporting plasters that some may have found suspicious, arising from abortive attempts to extract blood from several appendages.

“I’ve been declared ‘anaemic’” she announced.

Later the real reason for her motivation to join us became apparent.  She is engaged in a pedometer contest with two work colleagues.

I don’t quite know how, but armed with a flimsy scrap of paper showing the route portrayed below, we did manage to follow the blue line fairly precisely, despite night descending.  One section was along a deserted old railway line.  We were hemmed in by a deep cutting, with verdant late summer undergrowth. Andrew and Sue were discussing grizzly murder scenarios. A blinding light appeared.  Hearts fluttered.

The sound of “Good evening” as the cyclists sped past relieved any tension.  We got used to these polite encounters and slowly made our way around the 7 km route and back to the friendly pub for a second round of Holt’s Best. 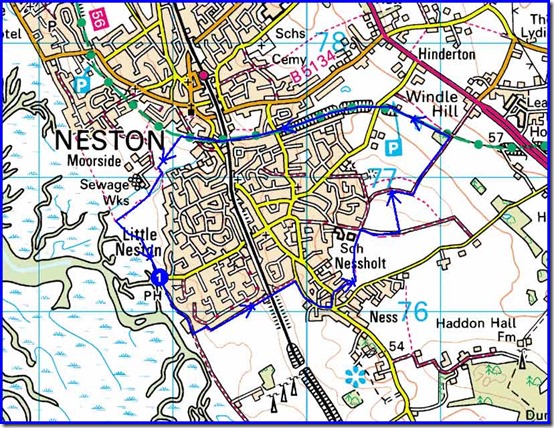 Some will recall or be aware that TGO Challenger Humphrey is enjoying a couple of weeks in the Pyrenees.  He doesn’t write a blog and enjoys solitude on such trips.  He is walking GR10 from Etsaut to Luchon and has managed to negotiate the serious snowfields of Hourquette d’Arre which Sue and I avoided.  “Oh Boy!” he reports.  By now he will have passed through Barèges and past the car park that houses huge piles of rubble that used to be the Hotel du Tourmalet.  He has been chatting to lots of locals – “the worst in living memory” – they say, when referring to the devastation caused by the weather during the first week of our own trip.

The third week of June, 2013, and it's aftermath, will be long remembered in this part of the Pyrenees, in Spain as well as in France.

Hopefully Humphrey will be enjoying views like this one from Col d’Ispeguy in July 2004. 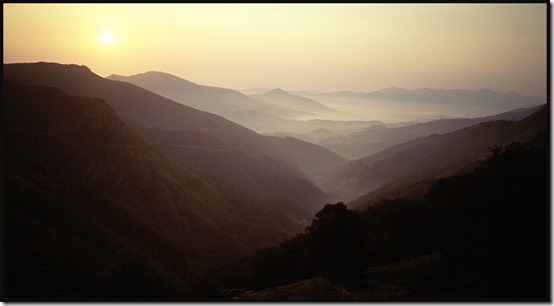 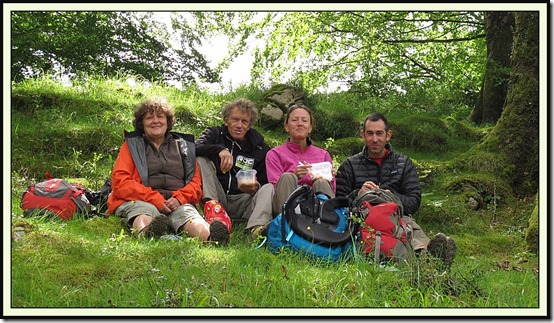 We returned from the Pyrenees with lots of new friends, resulting from encounters along the way.  Here are four of them – Chantal, Joël, Yolaine and Pierre.  We will see them again, though not as soon as hoped, as Chantal and Joël will be away on holiday themselves when we pass nearby their home in a couple of weeks’ time.

Hello you four, and all the others who enhanced our GR10 experience.