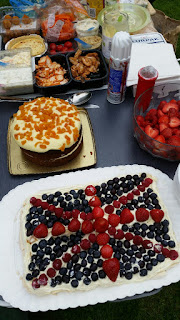 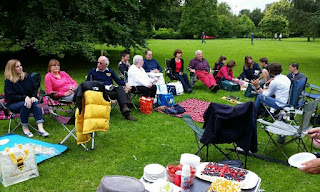 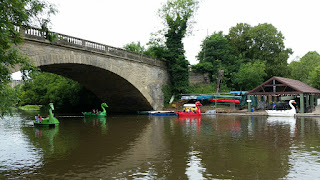 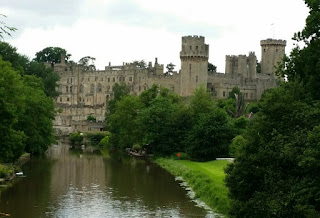 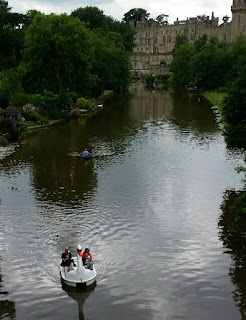 After a week saddened by attendance of the funeral of one of my closest work colleagues, Chris Neilson, and an assortment of computer and household issues/mishaps that cause regular frustration, together with news that Marian P had unfortunately broken her leg in Italy and has had to drop out of a forthcoming trip together with husband Mike (pause for breath), etc, etc, it was a delight to spend the day in St Nicholas Park near Warwick Castle with about 25 members of Sue's extended family.
There are usually more of us, but many of the regulars had good reasons to be absent and that meant that everyone who did come was able to sit in a big circle on the pleasantly sunny afternoon. It really was very relaxing.
The pictures don't show everyone, as some of the party were engaged in football, mini-golf, pedalos and other distractions. It's a short walk from the Park to the castle, which I understand merits a full day's visit.
Chris, in particular, was busy playing mini golf, practicing for a Challenge. On Monday he and three others will be trying to complete four rounds of golf on a full size course, all in one day, in support of the Macmillan Cancer Support charity. We hope they succeed in this formidable challenge.
It was good to see everyone and enjoy this most pleasant picnic in the park. A lovely way to spend a day.
Posted by Phreerunner at 21:40 2 comments: 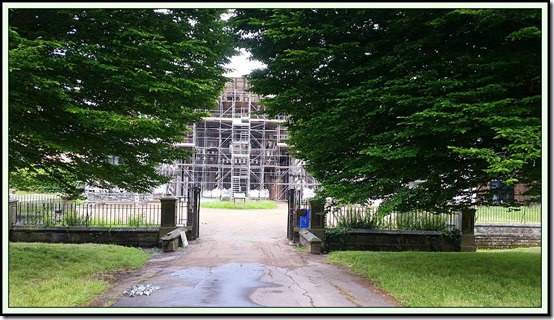 With no particular distractions this weekend, Sue and I popped down to Wythenshawe Park with a load of cake on Saturday morning. ‘Cake’ is a parkrun tradition, and is supplied every week by anyone doing a ‘landmark’ run – that’s 10 juniors), 50, 100 or 250. Plus any random other excuses for ‘cake’.

This week there were lots of ‘landmark’ runs, including Sue’s 50th, most of which have been at Wythenshawe.

First I tried to add to my series of photos of the renovation of the hall after the fire. There’s a big new fence with closely woven green wire, so the only clear view was through one small section where the old fence hasn’t yet been replaced. But as you can see from the above photo, the foliage of the trees obscures the view.

Altrincham and District Athletic Club were providing a series of ‘pacers’ for people who wanted to target personal bests. Each of them would be carrying one of the ‘time flags’ pictured below. No doubt the security men were getting anxious about these being leant against their shiny new fence! 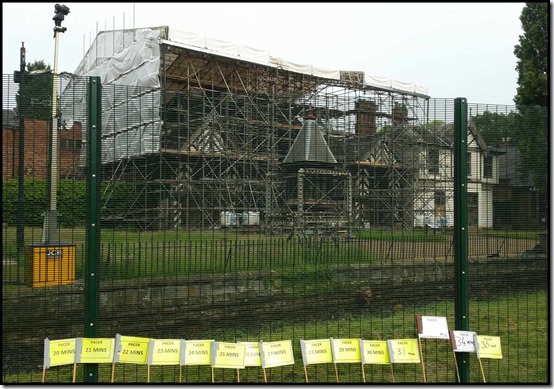 There was lots of milling around at the start, with Ralph on his pedestal trying to make himself heard over the hubbub of 295 chatty runners. 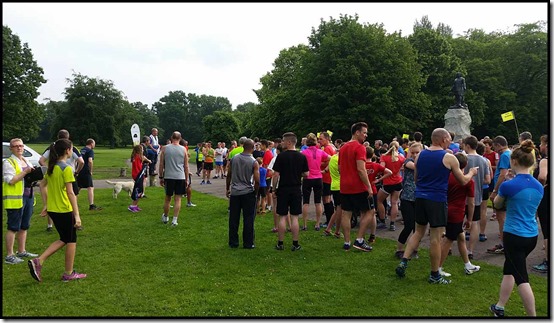 He was doing his best, but the loudspeakers really aren’t quite powerful enough.

Soon we were off and Ralph had been placed on a couch to recover. Paul Barber and I joined Sue for the first lap. She wasn’t very chatty. Paul is usually a quick runner, so he craftily hid behind Sue when I took this picture of both of them being outrun by a lady (sorry, I can’t remember your name) pushing a buggy full of children. 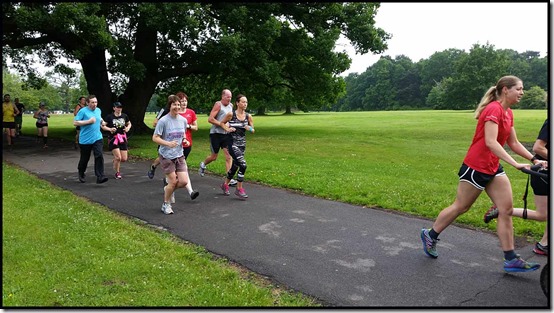 On the second lap, Paul and I soon caught the man with the 28 minute flag, and we worked out that he was only 40 seconds behind the 27 minute flag. I tried to catch the latter but he was still a long way ahead of me when I finished – in a little under 27 minutes. Not to worry. Later, we saw TGO Challenger Jenny, who had the 35 minute flag and was ‘in trouble’ for finishing in well under 34 minutes. Perhaps she should have emulated canny Danny (Racle), who I’m told waited just before the finish until his allocated time. But sadly the results don’t exactly show him bringing in a string of sub 20 minute finishers!

Sue was not bothered by all this, just wanting to complete her exercise without succumbing to injury. Here she is, dashing to the finish and well earned coffee and cake. 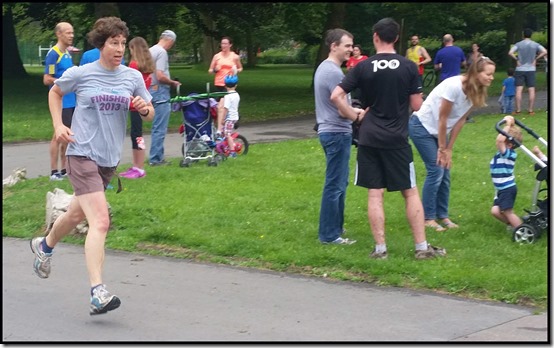