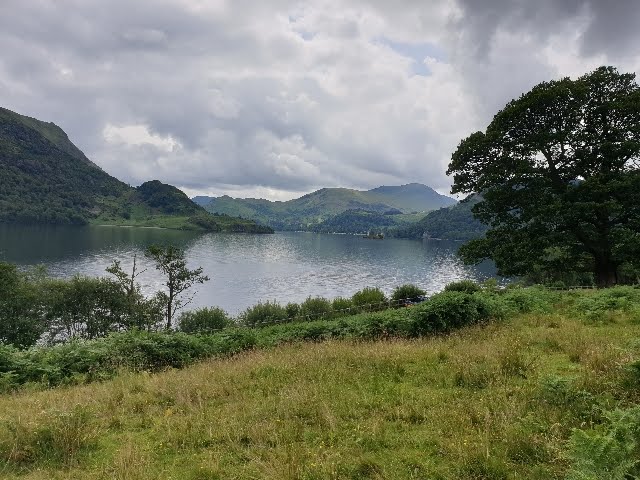 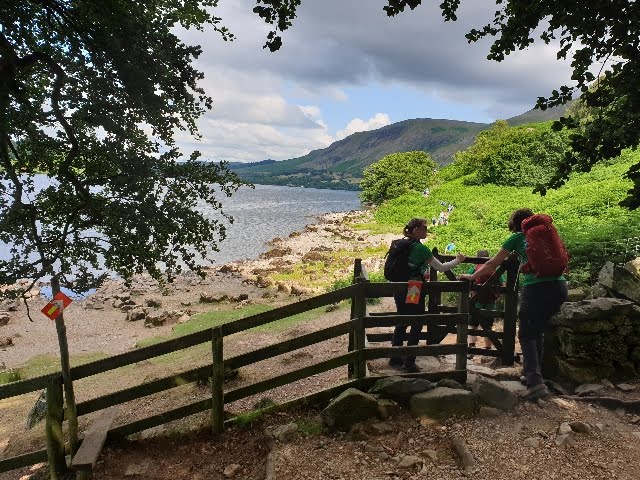 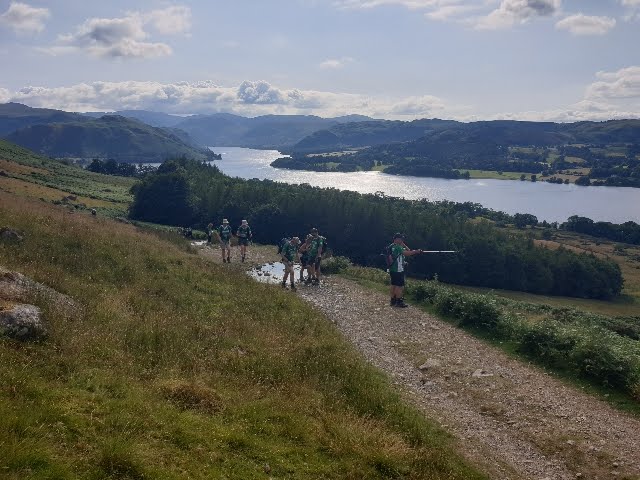 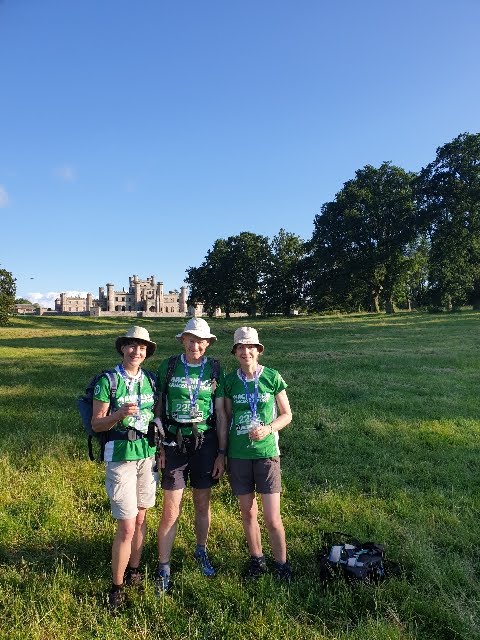 Today, Sue and Jenny and I had the pleasure of joining over 2000 other hikers for a 25.7 mile walk around Ullswater in aid of Macmillan Cancer Support.

The organisation was excellent, and it's a fine route, if a bit 'single file' at times.

We started at 9.40 and took less than nine and a half hours for the walk, giving us plenty of time to return to our guest house to 'refresh' ourselves before adjourning to the Boot & Shoe in Greystoke for rehydration and a meal.

I'll report in more detail in due course. The four pictures shown above are representative of this excellent day out in great weather for walking.
Posted by Phreerunner at 22:31 1 comment:

Last night we were pleased to join Andrew, who emerged from a long standing cocoon to lead a short evening stroll in Deepest Cheshire.
We assembled outside The Whipping Stocks on the A50 near Knutsford. 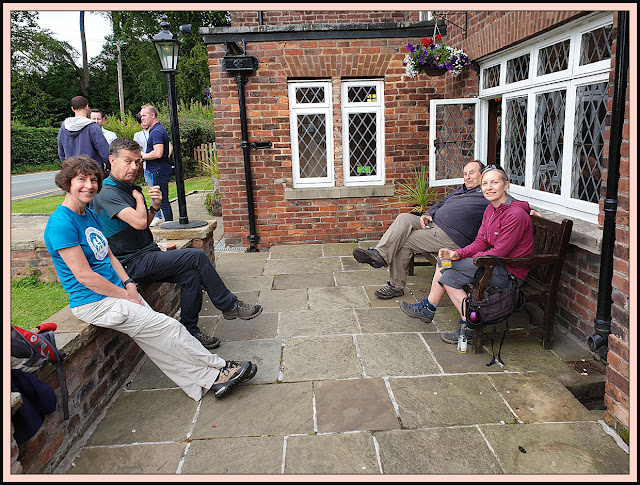 Soon we were storming along the footpath beside Radbroke Hall. 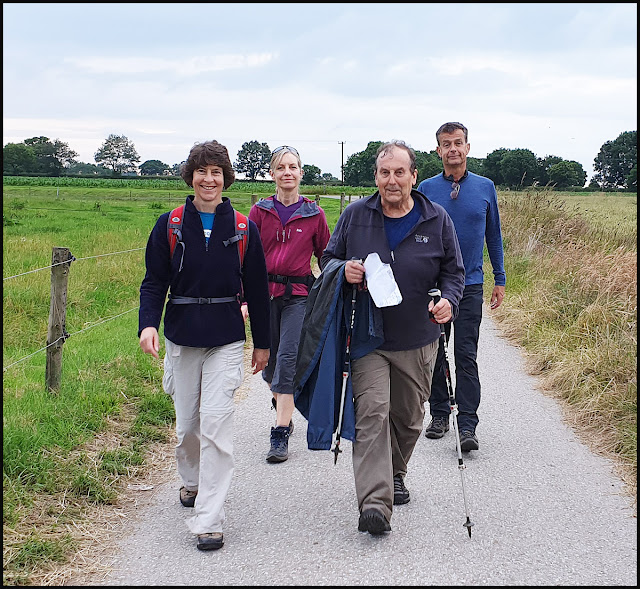 This is a 'polo zone'. Richard decided he wanted to 'pull', forgetting that he needed white jeans, a broad white belt, and willing punters. Also forgetting quite a bit more than that... Never mind, Richard. At least you tried! 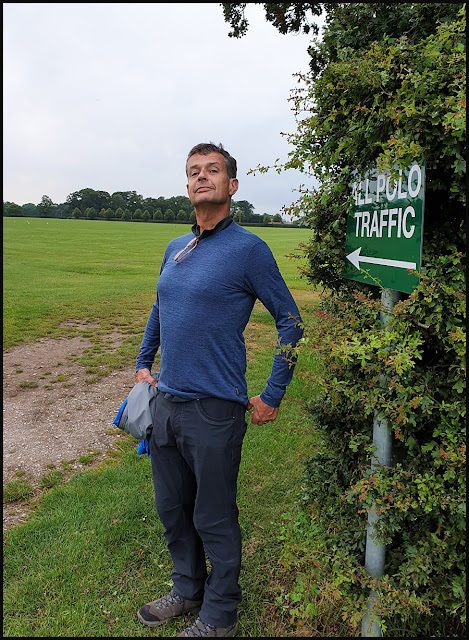 Pleasant paths drew a clockwise line on Andrew's map. Outside Peover Cottage, an owl winked as we went past and the overcast sky started to leak. 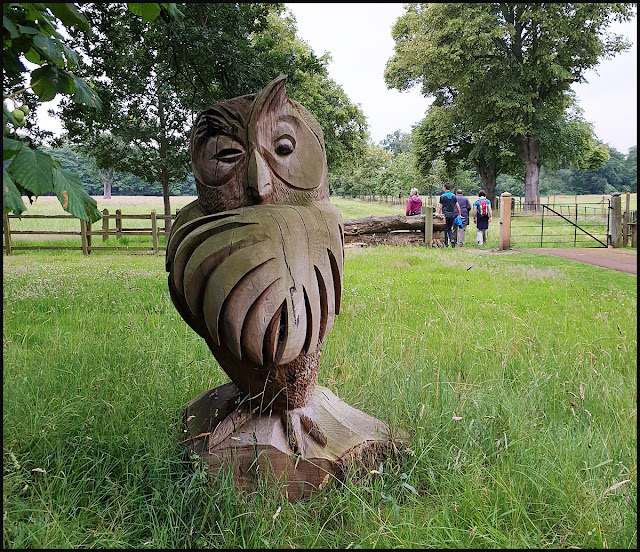 We dodged around Peover Hall, passing various antiquities that have featured on these pages in the past, as the rain tightened its grip over everything bar the sun, which is pictured through the deluge at the head of this posting.
Beyond the hall, there's a good track back to the Whipping Stocks. This 2 km track used to be the driveway to the hall before the age of the motor vehicle.. 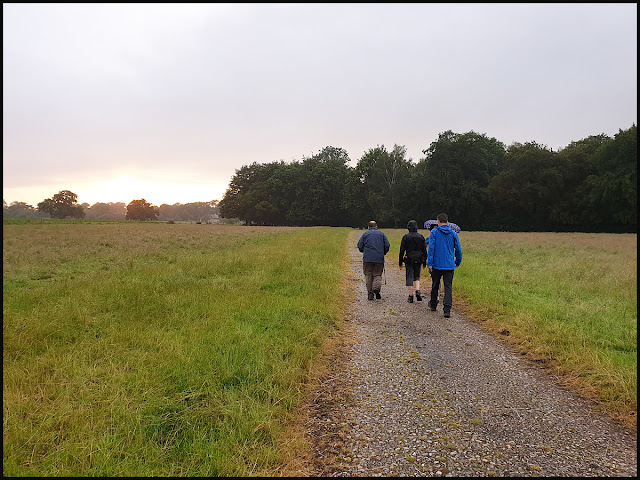 Despite the slow walk - Andrew is trying to recover from a hip problem, we were back at the A50 and the Whipping Stocks shortly before the sun finally adjourned for the day. 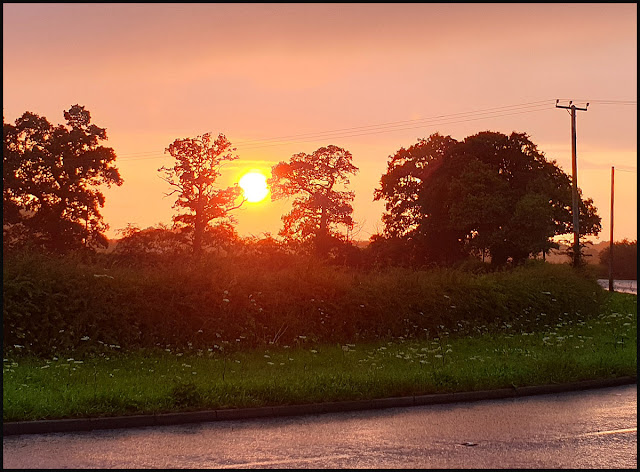 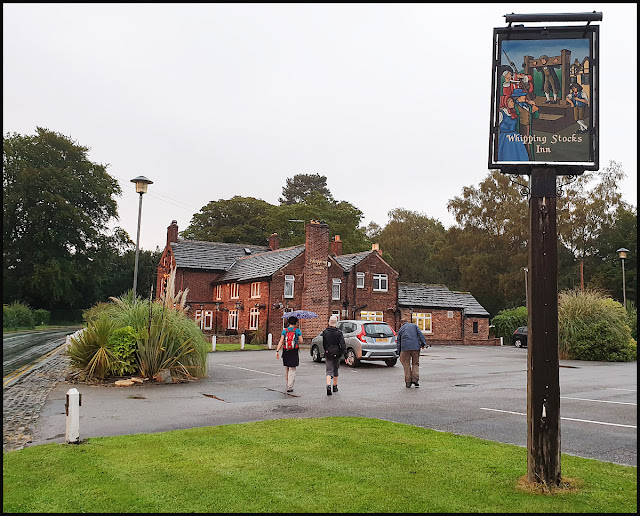 Thus, we adjourned to the pub for an hour or so after this pleasant 6 km stroll with virtually no contours - apart from a few stiles - to trouble anyone....
Here's the route: 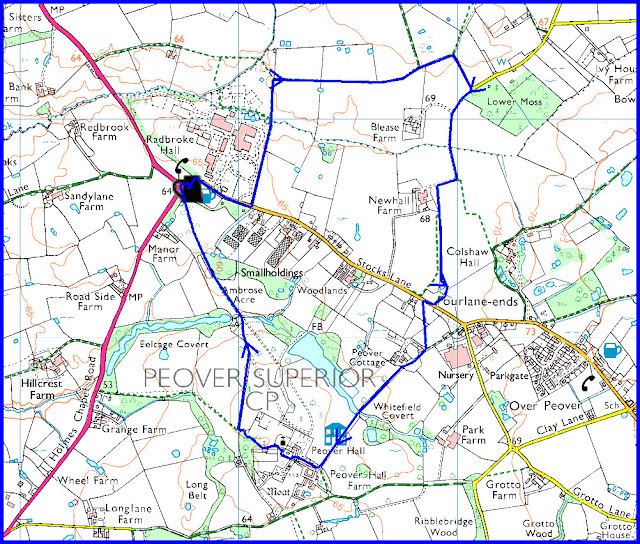 Thanks to Andrew for organising this little reunion of 'The Famous Five'.
Posted by Phreerunner at 15:43 No comments: 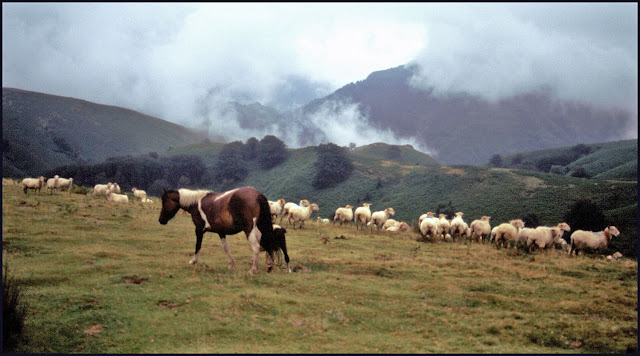 
Postcard Summary (on yesterday's card)
Damp campsite to Bidarray
Wet morning, steamy afternoon, rocky descent – 8 hours, 17 km, 750m ascent
Set off in dark heavy cloud on forest paths.  Light drizzle during the morning and we were in cloud on a long ridge.  Better at lunchtime when we had a view to enjoy as well as goats cheese and tomato butties.  Bidarray has a gîte which we have to ourselves, and an interesting church.  Its shop has stocked us up with food for the next few days.  Looking forward to a ridge walk tomorrow.
Diary Entry (by Sue)
The grey clouds that had accumulated yesterday evening produced overnight rain, leaving a grey morning. Tea, remains of muesli and a yoghurt in the tent, and away at 8:15. The campsite is on the route, so we exited via their back gate and were on our way.
The woods next to the frontier river were dark, as was the road that continued. The only noises this morning were the squeak of the rucksacks and the click of poles on tarmac.
Once across the river, the climbing for the day began and before we were out of the woods, it started to drizzle. New paclite Gore-Tex waterproofs were donned for the first time and we steamed beneath them as it was still warm (21°C). The track diminished to a narrow path, overgrown with bracken, and after a brief stop for another yoghurt, it was a thrutch to attain the ridge. The view disappeared, obscured by cloud, and did not reappear until Col de Gorospil, where there were large flocks of sheep, some with bells.


It was missly, but never rained hard. Route finding was interesting, due to the numbers of paths and tracks here. We had seen only one person until des Veaux, when, despite the cloud and light drizzle, more folk were seen out walking. Thankfully the weather started to improve - cloud lifted and the drizzle stopped. So, lunch of soft goats cheese and tomato on a French loaf was eaten with views in the dry. Brew was extra good. 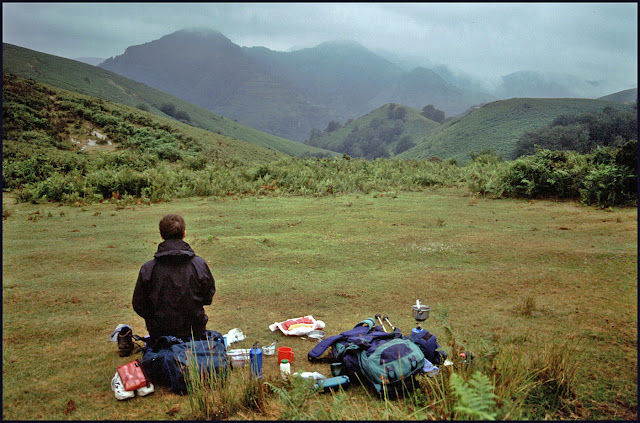 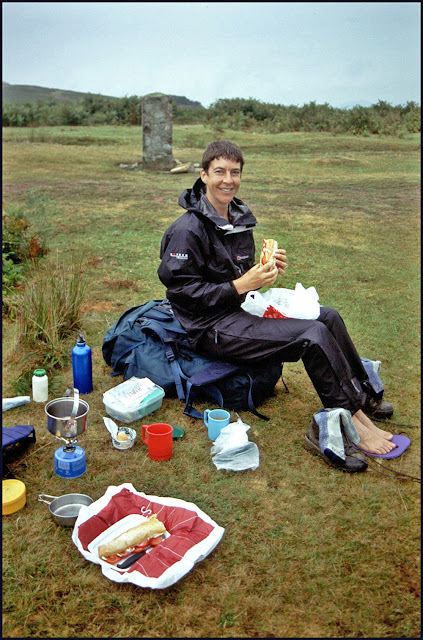 On this broad ridge were a mare and foal - she was after food and her foal was skittish -  skipping around looking carefree. (See top picture.)
Bizarrely, the next section was littered with confetti, even on the steep section.


Today has seen the first steep ascent and descent - the path dropped into a ravine where poles were very useful. It was disconcerting that a multitude of vultures (perhaps over 30) were circling the rocks above us. Some goats were also high above.

During this descent, Martin switched boots for trainers - the new boots are not entirely comfy yet. The basket of one of my poles got lost and was luckily found (thanks Martin), and we explored a small grotto just off the path. 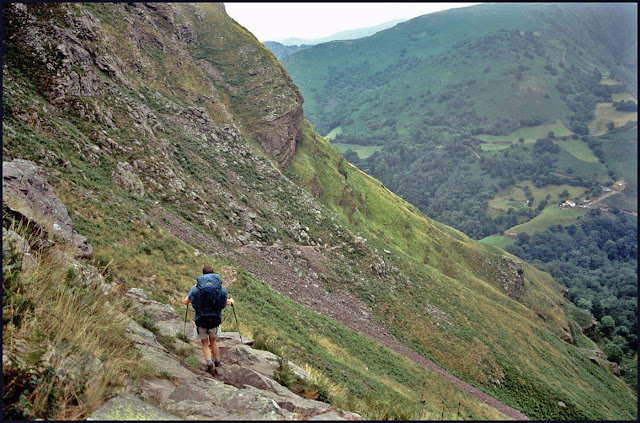 A feature of this area is the rocks - they appear to be conglomerates of loads of smooth pebbles.


More descent on road - the feet don't enjoy these stretches, then a nice past that contours to bring us into the . It is pretty - above the river Nive, with a fronton (Basque game played against a high wall), bars and an attractive Basque church with a very colourful graveyard from all the fresh flowers. 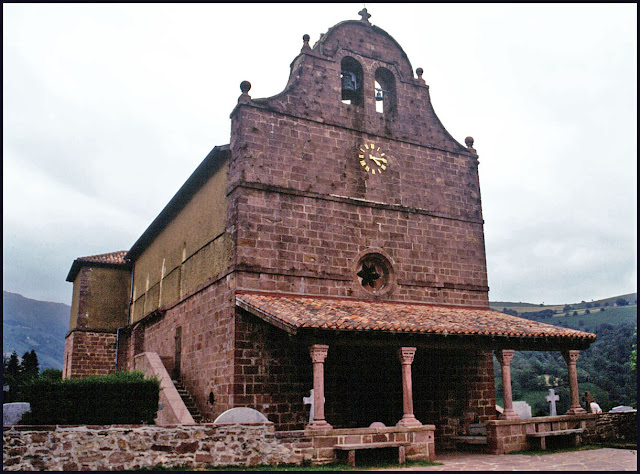 The backdrop of hills is lovely. Four GR10 walkers arrived at the same time as us - one hobbling badly. They disappeared whilst we sat in the bar.


We decided to use the gîte d'étape for accommodation rather than walk further to the campsite. We appear to be the first booking in to its dormitory style accommodation.

Spent time in a bar, and over beer and tea, wrote diary, logged flowers and the route, before showers at the gîte. Prior to our 7.30 table being ready at Hotel/Bar Barberaenea, we strolled around the church and wrote couple of postcards under still cloudy skies.Had a lovely meal, under plane trees again, accompanied by more English voices from a table of, predominantly, children. Salade with morue fish and garlic sauce, then veal/lamb and garlic potatoes, and tarte tatin/cheese (S/M). Red wine (and obligatory plenty of water) to go with it.
A long-haired grey cat prowled the tables, requesting to be fed titbits. He was lucky with a few bits of veal fat!
Stats and route (Viewranger):
18 km, 1100 metres ascent, 8 hours 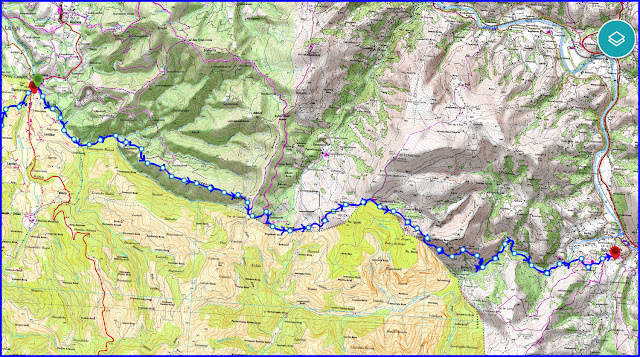 Back to Start
Next Posting
Previous Posting
Index
﻿﻿﻿ 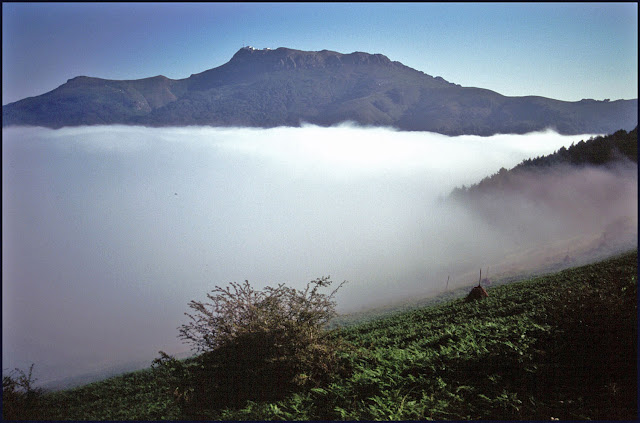 
Postcard Summary
Dewy lawn to Dancharia
Cloud inversion then hot and sunny on good tracks. Nice quiet campsite – 7.75 hours, 17 km, 400m ascent
Brilliantly hot sunny day – up in the 30’s C.  Enjoyed a long lunch en route to Dancharia, a border village with a huge supermarket.  Also a nice quiet campsite and restaurant where we enjoyed some beers and a meal under the shade of some plane trees. 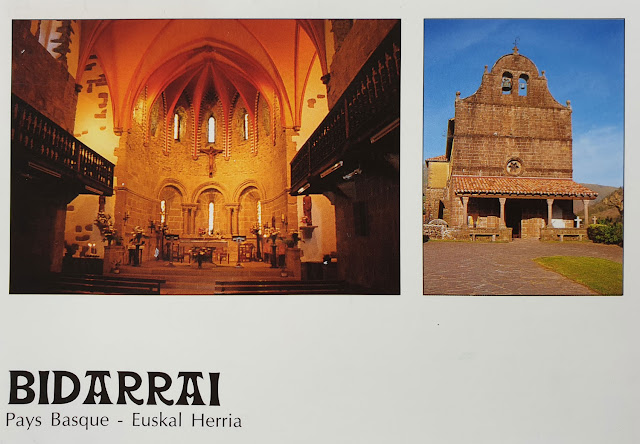 Diary entry (by Martin)
Steamy in Dancharia
Wake in night to fog under the stars. Still foggy when the 7 o'clock alarm announced it was time for a brew.
No real hurry as today is quite short - about 6 hours plus stops. Feels like rain on the tent but it's just dew from the trees above. Ate some of Sue's stock of muesli for breakfast before packing up inside tent for practice - it was damp but not wet outside - and leaving in mist at 8.15.
Reached the first col at 8.40 and had a 20 minute break for Sue to ablute. The small indoor gardening trowel got used for the first time. Suntan cream went on, as we were clearly nearly out of the mist.

Soon we had a superb view of La Rhune (see above), over a sea of cloud. The view east was just as good. Above the cloud we were on our own in a different sun drenched world, with distant sounds of jangling horse bells, neighing, and the hum of agricultural machinery somewhere. 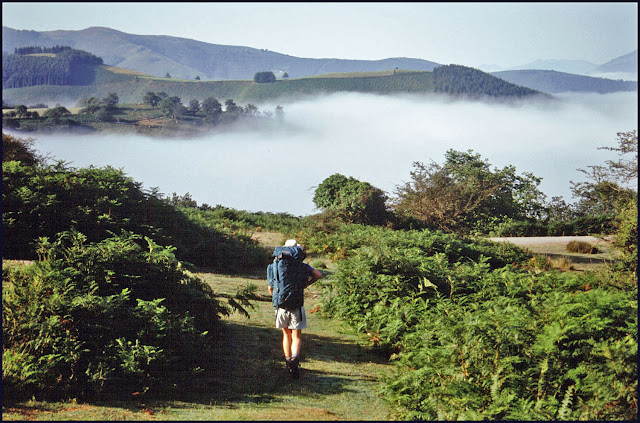 I wore boots this morning, as I did yesterday afternoon. They are quite comfy despite being new (cheapo KSB 300 GTXs) [they lasted to the end of my first TGO Challenge in May 2007] and only worn once before this trip - on a short evening walk.

Reached Col de Lizarrieta at 9.50 after passing two large shaggy ink cap mushrooms. Clear to the east. Cloud inversion the west. Two teas with lots of hot milk (had to drink most of that first!). A few cyclists and others about here - first people seen all day.

Then on along Véron's route. A huge hunting tower was passed. A 10-ft ladder would be needed to reach the entrance! The tower needs to reach above the massive and magnificent beech trees hereabouts. 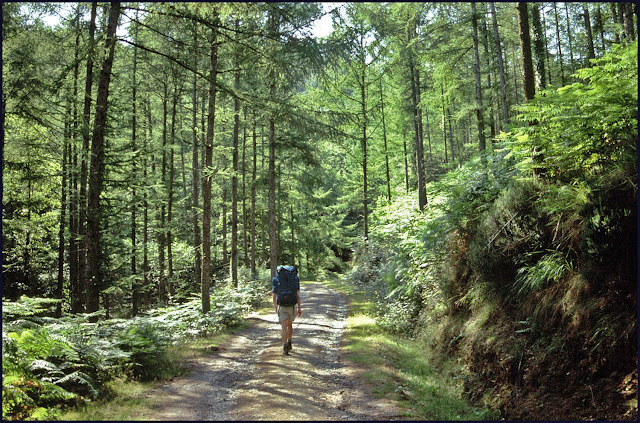 Suddenly I stop abruptly. The snake I was about to tread on squirms across the path. About one foot long and half an inch in diameter. Not sure what sort, but it didn't look like an adder.


Continue on in magnificent scenery, completely clear now, with views of La Rhune and the French coast, and to the east the lovely green rolling Basque countryside with its bright white houses dotted about.


Lots of Pottock ponies, in family groups; just couple in each group have bells, and there are lots of youngsters.
At des Trois Bornes, after a zone of dragonflies and spent cartridges, we stop for a brew and to dry out the tent a bit (thinking we wouldn't be using it for a couple of days). Other people were walking here. A group of Pottocks lazed nearby, and were frightened by mountain bikers who occasionally flew past. The tracks hereabouts are excellent for that activity. 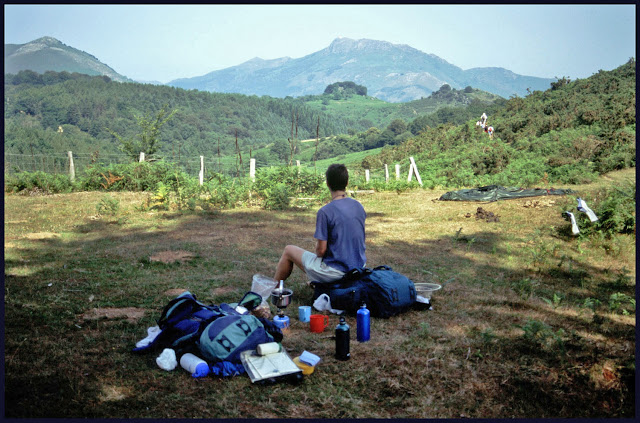 And so, after a 35 minute break, we ambled on past Atchouria mountains, where fauve vultures glided magnificently. Eventually Collado Urbia was reached and we walked down the road to the hamlet of Zugarramurdi, where we were immediately attracted to a bar for lemonades and hot sausage sandwiches. 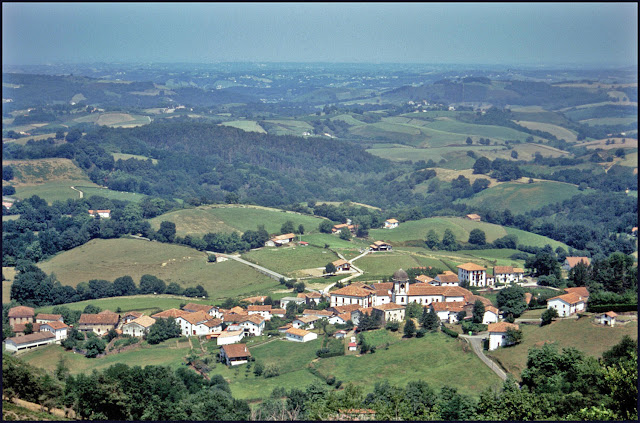 Zugarramurdi
The chewy chorizo sausage on a French loaf. A happy hour 2-3pm was spent here before we donned trainers, and I put my trouser legs on to avoid sunburn, for the hot 4.5 km to Dancharia. 31°C. Immediately on entering the place we spotted a campsite, where we were welcomed by a friendly and chatty proprietor who told us "another HRP walker came through at midday". We booked in, and washed and showered. (We were very sweaty.)
Then we explored. Not a nice place - just a huge border supermarket - great for supplies if we needed them. Ainhoa, 3 km away, is apparently the place to go. Next time, perhaps. [We subsequently stayed there on 18 June 2013.] Not even any postcards of Danchuria, but the campsite is a haven. A brilliant sunny day, but by 7.30 it has clouded over. It's still warm though and ok to eat outside the campsite restaurant.
Stats and route (Viewranger):
19 km, 730 metres ascent, 7.75 hours 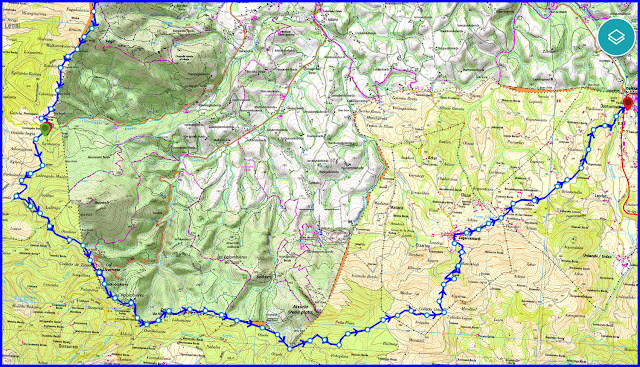 Back to Start
Next Posting
Previous Posting
Index﻿﻿﻿
Posted by Phreerunner at 22:54 2 comments: