On 9 October last year I posted an entry about a friendly heron.  It's one of very few postings where I wasn't able to use one of my own photos.

Several herons live near the canal hereabouts.  They are used to people.  Sometimes they just let you walk past, but usually they wait until the passer-by is a few metres away before lifting off and gracefully gliding to a similar distance on the other side of the pedestrian, to recommence their fishing.

Today I was a bit quicker with the camera, and whilst this image may not be up to the standard of the one I borrowed last year, at least it's my own. 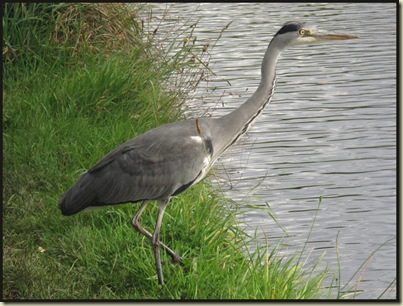 Posted by Phreerunner at 13:06 No comments: 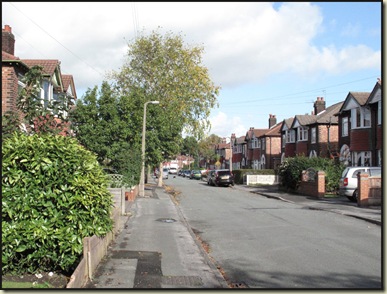 Timperley is a residential satellite of Manchester - the city centre being about 8 miles away, full of streets like this with the 3-bed semis, built on farmland in the 1930s, that are home to many of us.

Not terribly exciting, but judging by this shot most folk have employment, and beyond the houses on the right the Bridgewater Canal provides a green corridor to the countryside.  Relatively short drives lead to the Peaks, Dales, Lakes, Snowdonia and the pleasant pastures of Cheshire and Lancashire.

It's a two minute walk to the tram station from here - the amenities of Manchester being about 20 minutes away.

Not at all a bad place to live.

Today the G10 came jogging down the canal towpath with me - these rather manky hawthorn berries being the best subject I could find for testing the camera.  The test album (camera geeks only - and not really much use to them, I suspect) is here. 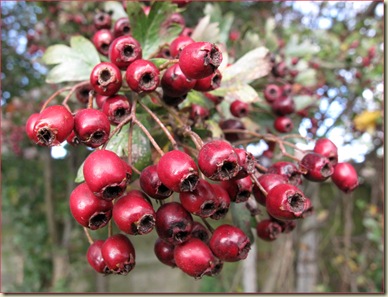 Posted by Phreerunner at 12:53 No comments: 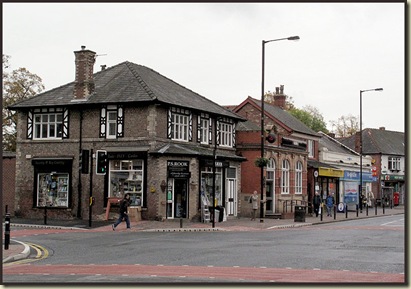 Last night we were due to go for an evening stroll from the Navigation Inn in Buxworth near Whaley Bridge.
Sue arrived home from work, damp from her bike ride, and announced that she was staying at home to edit her diving pictures (see some future blog, I hope).
Undeterred, I gathered my kit, winter boots and all, and made it to the porch.
Second thoughts!
I called Notchy - not at home - he'd already left.  His mobile responded though - he hadn't gone far and was on an essential refueling trip.  He sounded relieved at the opportunity to go home, and so I retreated from the porch, having escaped washing up duties.

The cats and dogs continued to bounce on the pavement outside whilst I emailed Peter to say we wouldn't be seeing him.
'I don't blame you, it is a foul night' he responded, from Whaley Bridge.

Apologies to anyone who did turn up, but 'you must be mad'.

This post describes the route I had originally planned before shortening it to a more manageable evening stroll. 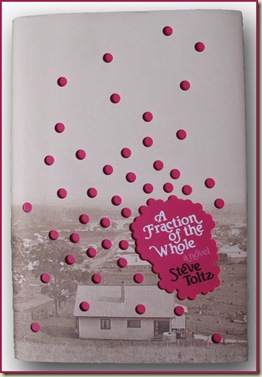 A Fraction of the Whole, by Steve Toltz, occupied me for the rest of the evening - a much better choice than the G10 camera manual lying alongside it!
In the background The One Show rattled on....in part about the very same book.
What a coincidence!  It's an excellent read with a liberal sprinkling of dark humour. 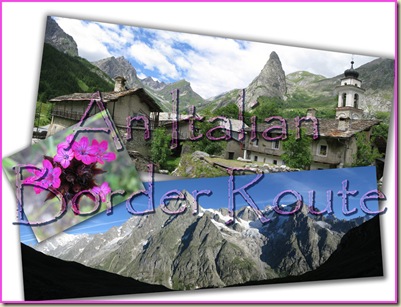 The 'Italian Border Route Slideshow' is coming on apace.  Out of 1500 images taken, we shortlisted 500 and have now reduced that to around 160, which should be more than enough for an hour's show.  I spent several happy hours today inserting notes into the PPT presentation.

I was going to say something else here, but, believe me, I can't find the right words. 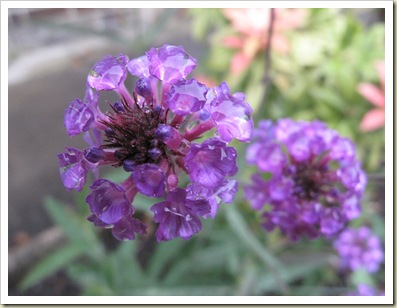 Seems ok to me!

Only camera geeks need read on:

I took two other pictures of flowers, and then indoors - 6 pictures of the same poster displayed on the monitor, using different ISO settings. For anyone interested (eg Robert, from ? - I don't recognise the language on your blog, Robert!) I have uploaded them to a Picasa album here. This album includes later experiments with the G10.
But I'm not an expert in this area - to find proper reviews of the G10 you should go elsewhere. Bill Lockhart's blog may be a good place to start. I for one will be following his reports on using this camera. I just hope I can get some photos even half as good as his. His comments on the G10 as at 19 October 2008 are here.

It was breezy outside - that's may be why the second flower (at 1/80) is poor. Rain forced me indoors where the camera was placed on its little tripod about 50 cm from the monitor. The 6 photos were taken using the AV setting and the different ISO settings from that dial. I don't have a remote shutter device, so just touching the camera may have resulted in the poor quality of the first 4 images. Those at ISO 800 and 1600 are crisper but the colours aren't as good.

I usually use photoshop to crop images and 'save for web' with a border and occasional adjustments. For the purpose of this test, the images are exactly as downloaded from the camera - set on large (4416x3312px) images.

What would you like me to do next by way of a test that is meaningful to you, Robert? I'm not used to doing this sort of thing!

22 October - here's another small album.  The pictures were taken using SCN on the mode dial and then twirling the control dial to the appropriate setting (landscape, foliage, etc).  No tripod was used, and the stitching is visible in the panorama shot (photostitch was used).  The only adjustments were a bit of cropping.  The sun was shining brightly on the information board, so I'm pleased that the text on it is readable.  The train is a photo of a 48 year old faded 5" x 3" snapshot I took on Stafford station with an old box camera.  There's a bit of reflection, and I appreciate that some effort in photoshop could improve this image; but it still looks better than the original!

5 November - I'll be putting some more images up - from our Egypt trip - soon, but these will be a mixture of G9 and G10 images.  Meanwhile Bill Lockhart has some more images here, and Michael Reichmann has some observations on the G10 here.  These two people appear to be respected photographers so I defer to their skills and recommend that those of you visiting this blog only for the purpose of seeking comments on the G10's performance should take heed of their observations and images, rather than my own.

However, I would add that I continue to enjoy my new purchase, it is so much better than my old S70. 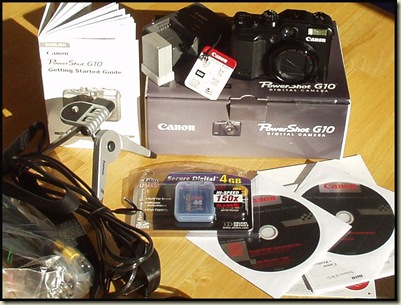 Well, what a surprise!

A call from Kamera (Equipment Express) in Altrincham alerted me to their first delivery of the G10. They only had five, so I'm glad I got my name down early. The price was cheaper than expected, and as I already had a case, they kindly swapped that for a bigger memory card which indicated that it will fit over 1000 high resolution images.

The expected availability date, 31 October (see my earlier posting on the subject), was subject to change, and I assumed it would be a change for the worse. How refreshing to discover that they have actually underpromised on everything (except, I hope, quality).

I can't find any reviews of the camera, so have taken a bit of a flier I suppose, but it looks good to me.

I'm up to page 30 of the 300 page manual. The snap above was taken with the old Olympus C-220, but the G10 will soon be in action. Rather a lot more reading is necessary as well!

There are some links to images here.

That was won in 2 hours and 6 minutes, by this chap, Stefan Macina. 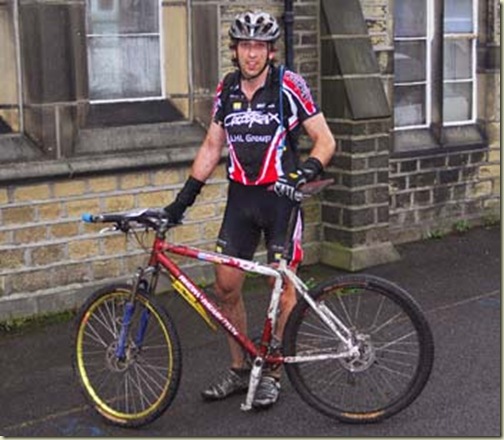 Robert and I were over an hour behind him, in the third quartile of the field. This year there were nearly 400 (or so it seemed) participants. Arriving late, I failed to push my way down the narrow lane to rendezvous with Rob, who set off ahead of me and finished over 30 minutes ahead, in just over three hours. He 'walked' me in (it finishes with a steep hill) and explained that he had a new bike that had produced a bit of speed. He must be one of few people to go faster this year as despite the excellent weather the moors were very wet, with ankle deep mud in places that are often fairly dry. A section of the moor that can usually be cycled had to be walked this year - my attempts at cycling it were abandoned early due to spinning wheels and others walking past!

So a time of 3.32 was quite satisfactory. Yet again the riders who chose to walk down the technical sections were most courteous in moving over - for me these sections are the most fun - but my slow overall speed puts me amongst folk who despite their high spec bikes still prefer to walk. Others who did choose to cycle managed to strew themselves in bushes and moorland - I think perhaps they were trying too hard! But apart from a few scrapes and bruises nobody seemed too badly injured, though quite a few of us suffered from cramp.

I'll add the positions etc when they are published. (See here.)

I didn't take a camera, but after finishing took these snaps with our old Olympus C-220 camera - something of a museum piece.

Here's someone approaching the finish in Sowerby Bridge - the hill is quite steep. 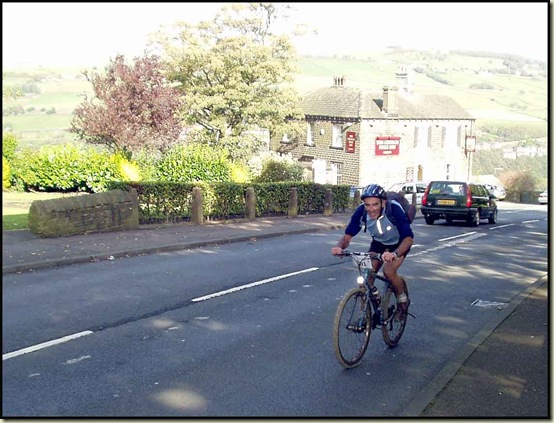 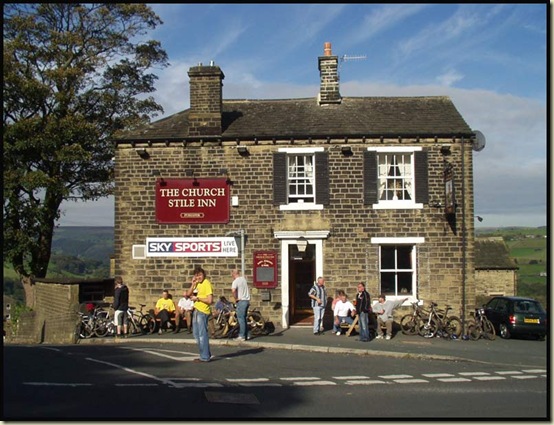 From where stragglers can be encouraged. 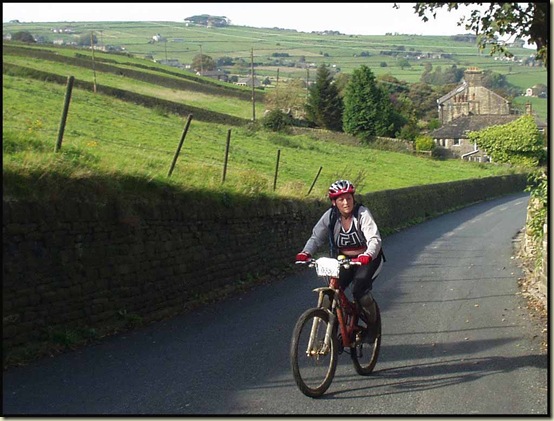 And stories can be recounted (and new t-shirts admired!). 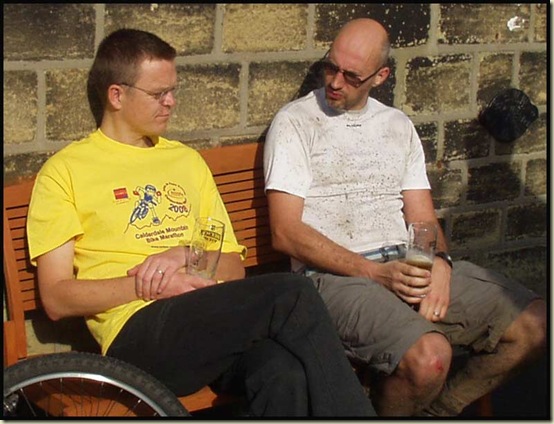 ...time for another beer, I think.

Then it's home to find a hose pipe to wash down the old bike and the Innov8 Roclites, all of which were totally encrusted in mud this year. 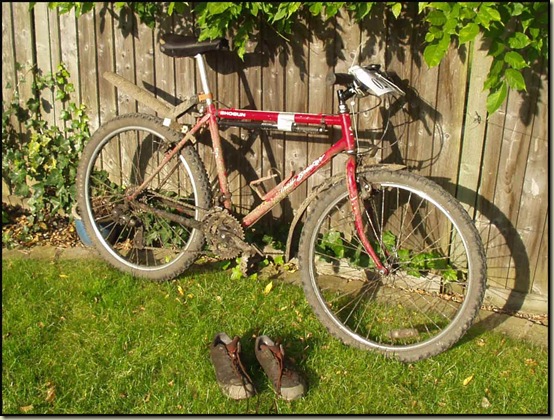 Finally, a big thanks to the organisers, who provide frequent and very effective support points and who mark and marshall the course.
It means you don't need to take any food or drink with you. They really are very efficient.

Next year's event - on 11 October 2009 - is in the diary, and further information is on the CMBM website.

Posted by Phreerunner at 23:57 No comments: