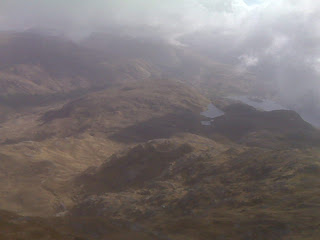 It's a Long Way Down.

With Hidden Bands of Rock (aka Cliffs).

And a Sting in the Tail.

Sent using BlackBerry® from Orange
Posted by Phreerunner at 12:34 No comments:

Martin’s planned route and statistics for today are shown below: 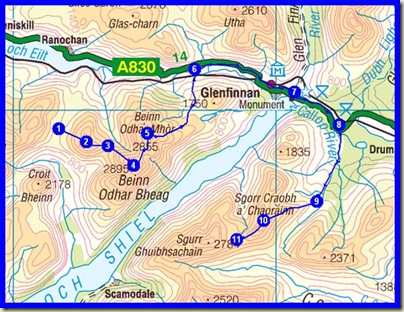 Posted by Phreerunner at 12:00 No comments: 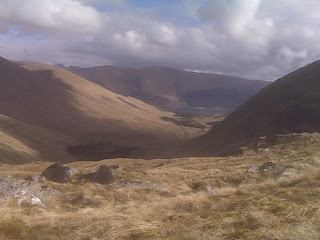 After saying goodbye to those at the hotel, and being snapped for the album by JJ, I set off alone.

Out of 44 folk setting off from Lochailort, I seem to be the only one to be bagging the three Corbetts (mountains of 2500 to 3000 feet in height, with at least a 500 ft drop between them) immediately to the south of the hotel. Maybe they have all progressed further in an easterly direction than my paltry 5 km!

Anyway, today went well and has left me with the (I predict rare on this trip) chance for an early night.

My planned route suffered an immediate amendment when I realised I'd failed to incorporate a visit to the ocean (Loch Ailort). I met two of the Americans in Russ Mannion's team who had also appreciated that particular nicety of the Challenge, but I don't know whether anyone else actually bothered to start at the coast (bar someone who was almost camping in the loch!).

There was a thin, but unexpected, path up the Allt a' Bhuiridh valley, so I took the advice of Colin Crawford (my vetter) and by-passed Seann Chruach by taking the valley path. I just about got a view from An Stac, but had to descend in mist.

Rois-Bheinn was also in mist, so there was no point in visiting its western summit. That contributed nicely to my early finish, as did the terrain, which was not as rough as I had expected. Until, that is, the final knife edge ridge of Druim Fiaclach and the following sharp descent down steep ground with randomly placed small cliffs. The key to success on the ridge was to stay on the blade of the knife - quite entertaining at times. Good views too (see snap).

I'd enjoyed lunch on the summit of my third Corbett, Sgurr Ba Glaise, after a satisfying morning's walk. Here I received a message of encouragement from Geoffrey (who I promise to visit in Macc asap) and the first of two pairs of day walkers passed by. They are the only people I saw all day.

It's a lovely evening as I gaze from the open tent down Glen Aladale to Loch Shiel, as I tuck in to my pasta and tuna dinner.

Posted by Phreerunner at 09:29 No comments:

TGO Challenge 2010 - Setting off from Lochailort on a showery morning 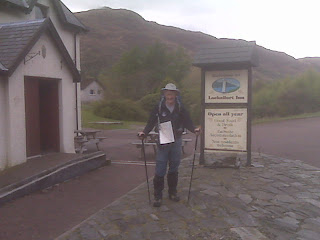 Sent using BlackBerry® from Orange
Posted by Phreerunner at 10:49 No comments:

Martin’s planned route and statistics for today are shown below: 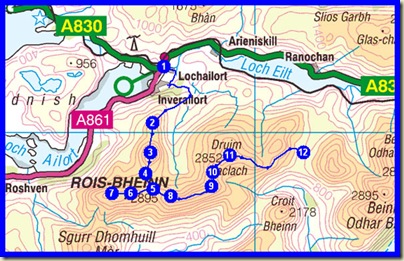 Left home 6.15; arrived in Lochailort at 17.15 after a smooth journey in good company.

Sue was missed - it's "hello Sue, sorry you can't be here" from lots of old friends, and "thanks for the shortbread".

The weather has clouded over as we've travelled north, after a frosty morning in Timperley. Everything seems but greener than it was three weeks ago, but it's quite dull under the heavy cloud.

Mr Sloman is, however, excessively green.

There's no picture today due to a weak/intermittent signal. But rest assured, the dull weather outside won't dampen the jollity of the evening here in the Lochailort Inn as we all stoke up in preparation for our energetic fortnight ahead.

Sent using BlackBerry® from Orange
Posted by Phreerunner at 17:55 No comments: 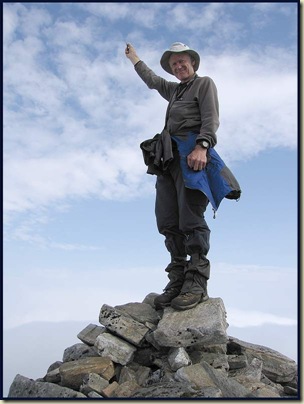 The time has come…

I set off in a few hours time to the fleshpots of Lochailort, where around 40 out of a total of 300+ Challengers will be assembling before starting their walk across Scotland on Friday morning.

I’ve not had time to produce the usual web page, so my planned route will be revealed here on a day to day basis.  I’ll be setting off in a southerly direction, unlike the vast majority of those starting at Lochailort, who I suspect will be heading east.

For now, you’ll have to make do with the outline shown below; a route of 360 km (225 miles) with around 18,100 metres of ascent.  It’s highly unlikely that I’ll be able to meet this Challenge despite the encouragement of my vetter (who I thought would ‘rubbish’ my plans).  So it’s just as well that I have an alternative ‘Foul Weather Alternative’ (FWA) which comes out at a mere 320 km with only 8,600 metres of ascent.  The disadvantage is that it omits the 28 summits (2 Munros, 20 Corbetts, 5 Grahams and a Marilyn) that are included in the longer route.

Realistically, I hope to make at least 10 of those summits


My best wishes go to all the other Challengers, including the Proud Scotsmen amongst them and the various bloggers – think of them as they stand aloft Scottish peaks trying to transmit their hastily compiled words over the course of the next two weeks…

My previous three Challenges are described here, just in case anyone is interested.

“Let’s go to Lathkill Dale” suggested the email from Graham.

So it came to pass that a dynamic quartet winged their way, in Polly – her first outing of this nature, to Monyash.

Luckily we arrived early.  That meant we could enjoy a mug of coffee outside The Old Smithy.  It was sunny and warm, or should I say ‘warm in the sun’ (cool elsewhere…). 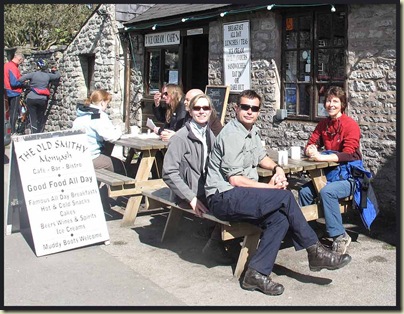 Six others arrived.  The route march commenced.  I know I should be in training for the TGO Challenge, so I could just about keep up. 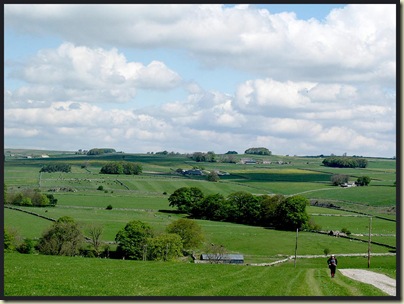 Eventually we re-grouped by a field of brightly coloured flowers. 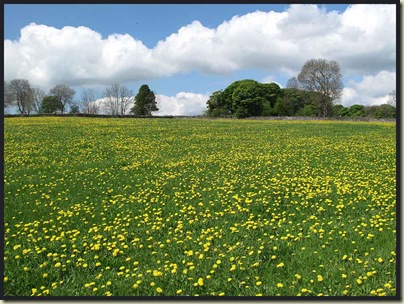 The Boss had obviously fallen behind schedule as some road walking was now required.  The pace picked up again and we were soon striding into Middleton, distracted only by a hungry horse. 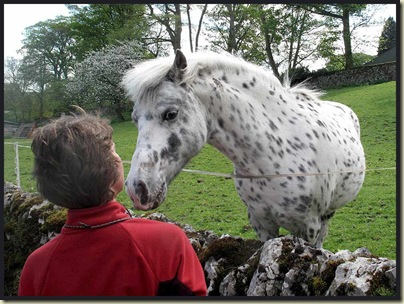 Richard tried to make a getaway, but the old Rover 100 defeated his locksmith’s skills. 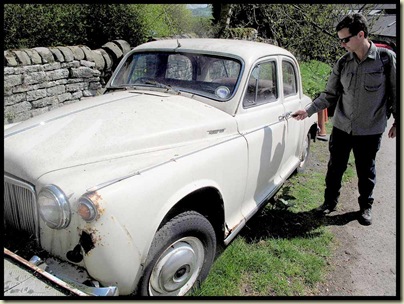 It was very green by the River Bradford. 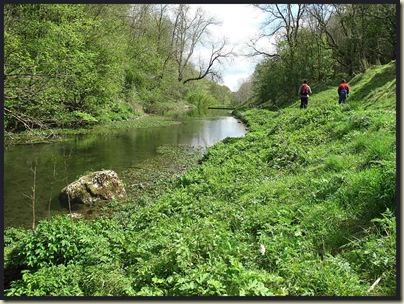 A dizzy coot watched us fly by…”why so fast?” she squawked. 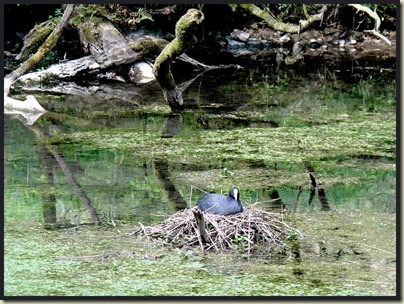 We were clearly in a race against the brown trout to reach the hostelries of Youlgreave in time for lunch?

Suddenly we found ourselves striding on into Lathkill Dale, full of Sunday afternoon hordes. 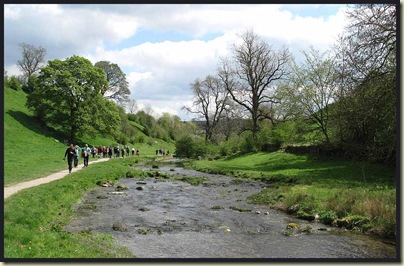 Surely now time for a break?  A splinter group fell briefly behind, refuelling with chocolate caramel shortbread on the hoof.  Our leader usually stops for this, but not today.

“Can we stop, please?” bleated a weary soldier with a neck problem.

“Only 5 minutes, just around the next corner” was the response. 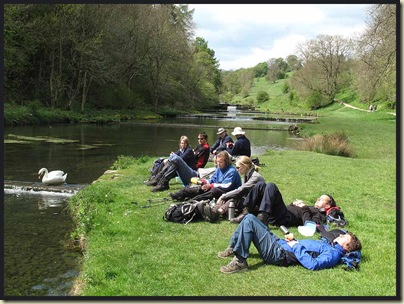 Afternoon – a simple solution, I just fell back and went slowly, occasionally chancing upon the route marchers who had decided to wait. 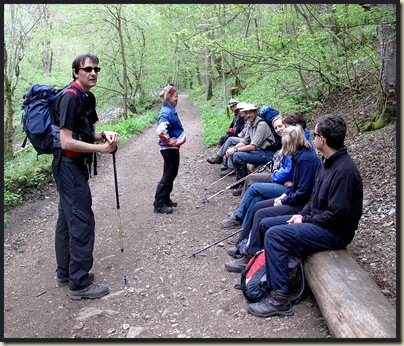 It took nearly as long to complete the afternoon’s 7 km as it had taken to walk 13 km in the morning.

We stopped to admire some flowers – they are flowering later than usual this year, but we did find one orchid by the path. 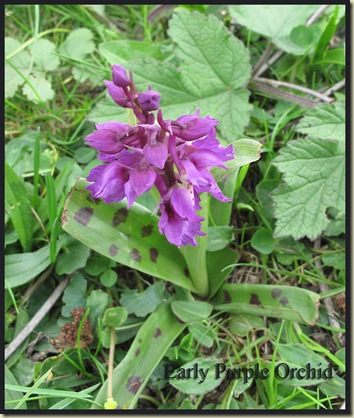 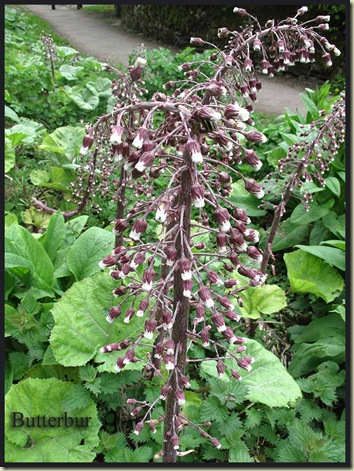 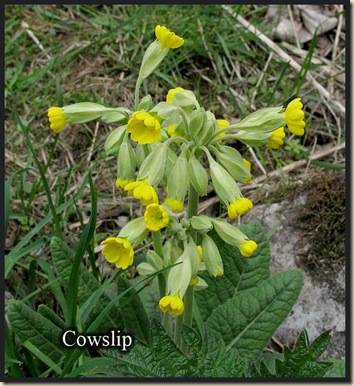 Tea/beer/hot chocolate/cakes all went down well at The Old Smithy, to which we had returned by 3.30, well exercised after this 20 km dash in 4.5 hours (Naismith would have taken rather longer) with 600 metres of ascent.

Here’s the route, which is not mandatory, ie footpaths to Middleton are permitted as an alternative to our rush along the roads, as is a pub stop in Youlgreave.  Lathkill Dale is highly recommended. 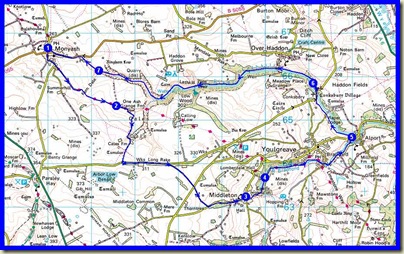