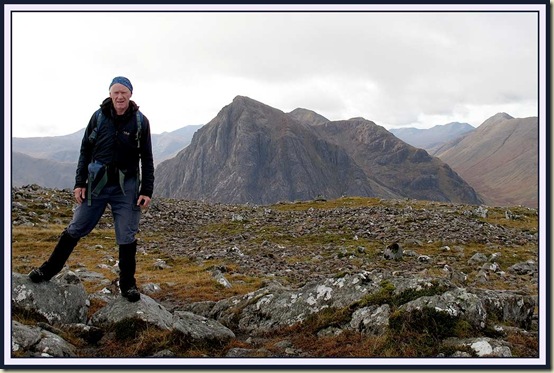 Last weekend numerous stalwarts of the TGO Challenge congregated at the Alexandra Hotel in Fort William for an annual reunion bash organised by Les and Issy Silkowski.  And very well organised it was too.

Whilst the majority of attendees were happy to potter about in Fort William*, a few of us chose hills on which to enjoy the autumn weather.  On Saturday Graham Brookes mopped up his last Munro in the area – Beinn Sgulaird, whilst Emma and Stan pottered up Beinn a’ Chrulaiste.  Others may have ventured elsewhere, but I’m not aware of any epics.  On Sunday the rain seemed to dampen enthusiasm, with Emma and Stan perhaps making the best call with their visit to the ice climbing centre at Kinlochleven.  By Monday, everyone either had or was wending their way home, though Emma and Stan were going via The Fara.  Good on them!

All this meant that unlike last year, when Graham B and I walked together, I was on my own for the walking aspect of the trip, which was otherwise highly sociable.  At least that meant I could potter along at my own pace rather than continually battle to keep up with Graham!

Here’s what I got up to:

Parking up at the bridge beyond Spean Bridge before reaching Corriechoille, there was frost and bright autumn colours as I headed along the road before turning up the good track that leads to Rannoch and many other enticing destinations. 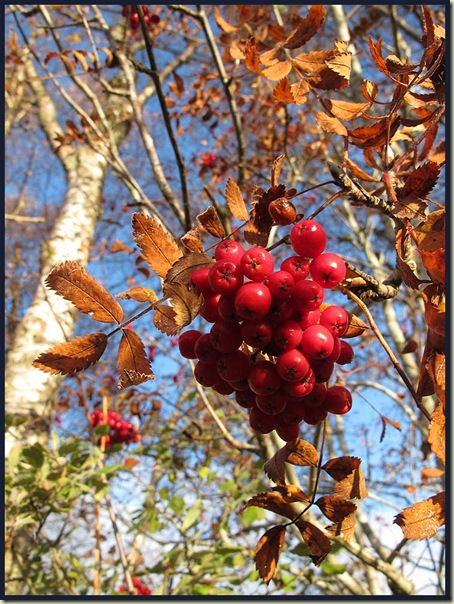 The River Spean was low, with a rather monochromatic look in the low sun.  The path to Rannoch is a long one – 26 miles according to the sign.  Much closer, Aonach Mor stood high above the frosty fields and The Grey Corries slowly came into view.

A little way along the path, beyond the turn off to The Grey Corries, I looked up and was surprised to see this gentleman winking at me. 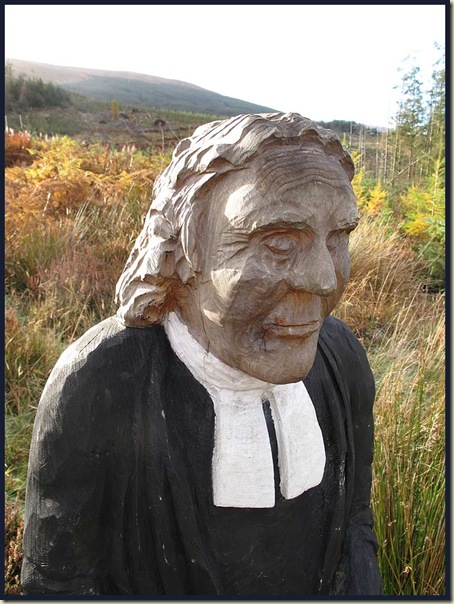 After being rather taken back by this unusual encounter, I realised he wasn’t moving.  I’m sure that had he been alive, he would have responded to my greeting, but today his response was by way of a small plaque at his feet:

THE WEE MINISTER
A stone statue of the Wee Minister dating back from the 1900s once stood on a site near here and was said to bring good luck to climbers and walkers.
The statue, believed to be of the Rev. John McIntosh, was destroyed in the 1970s.
However in May 2010 the local tourism group decided to resurrect him and replace him with this replica crafted in cedar wood by Peter Bowsher, champion wood carver.
Good fortune to all who pass this way.

Today’s first hill, Cruach Innse, soon drew close as the excellent track wound its way up The Lairig and onwards to cross Allt Leachdach, beyond which I enjoyed elevenses before forsaking the path and heading up grassy slopes with fine views across to The Grey Corries.

It was quite breezy on the 857 metre summit of Cruach Innse. 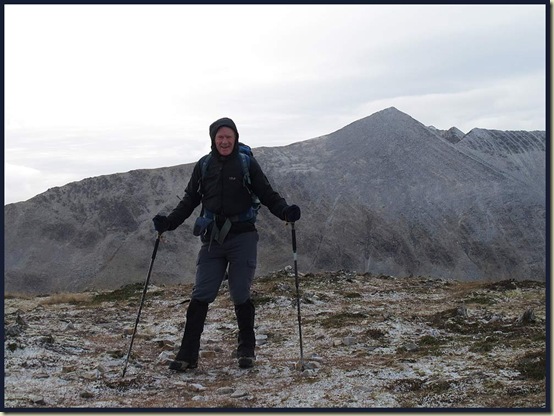 It’s a short but pleasant ridge walk that cuts down to the south to reach the 593 metre col that divides Cruach Innse from its puny looking neighbour, Sgurr Innse.

However, the Sgurr is quite craggy so more care is needed on this modest hill.  Three ptarmigan kept me company for a while.  They had already dressed for winter, and indeed there was a sprinkling of snow on the summits, but even in winter plumage with no snow these birds are well camouflaged. 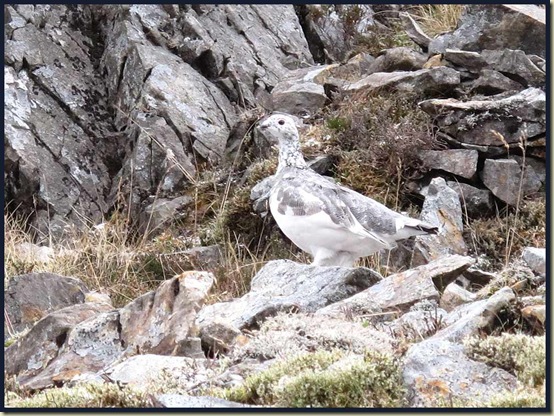 Sgurr Innse’s 809 metre summit was soon gained.  An eagle soared far above, and whilst the weather was clouding over there were good views across to The Grey Corries, and to the south to the Achallader summits beyond Rannoch Moor.

Returning down Sgurr Innse’s craggy slopes to the 593 metre col, I then headed directly down to the wide track, and down to the Wee Minister, then past ornate gateposts at Corriechoille, to reach the car minutes before the rain came. 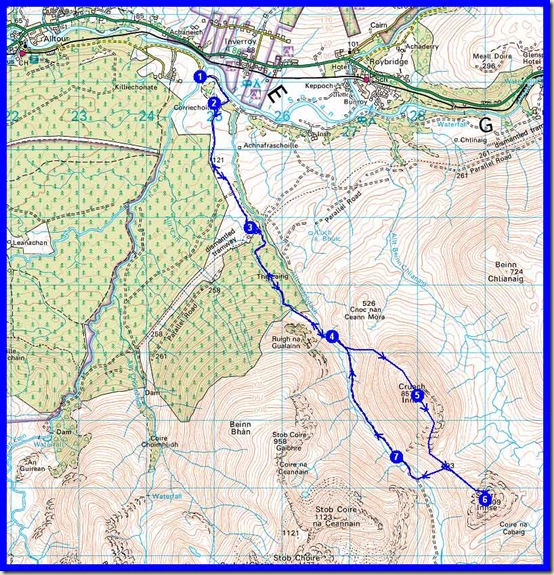 Later, some lucky raffle winners are pictured below – thanks go to Ian Cotterill for the image he placed on the TGO Challenge Message Board.  There were some great prizes, thanks to John Manning’s efforts, and those of organisers Les and Issy, whereby TGOC sponsors and friends donated some very generous prizes.  There was even £150 left over after payment of the band (a reason for the raffle) which will find its way into the coffers of Lochaber Mountain Rescue.  Thanks also to John Donohoe for updating those gathered on several TGO Challenge administrative matters, which he conveyed with great humour, as always. 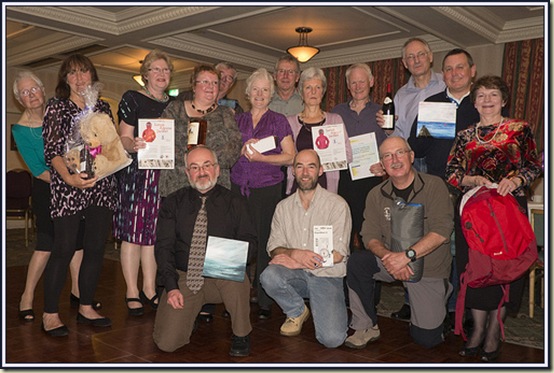 The dance floor (I keep away from such places) later claimed some victims.  The arrival of an ambulance alerted those of us at the bar of a major incident.  Janet was concussed and required an overnight stay in the local hospital, whereas Pauline’s thumb injury failed to hospitalise her.  What the two of them were up to remains a mystery.  I’m sure everyone would wish them a speedy recovery.  When I left the hotel on Monday morning the staff were compiling a claim for compensation for a serious dent in the dance floor!

It was raining, but not too hard, and it wasn’t particularly windy, so I adjusted my plan to one of modest ambition, the ascent of Garbh Bheinn, from Caolasnacon beside Loch Leven.

The path relentlessly ascends 800 metres, over the short distance of 3 kilometres, to gain the 867 metre summit of Garbh Bheinn.

Luckily the cloud base was around 800 metres, so there were views, if not that ‘good’ for most of the way up, especially looking back to the Pap of Glencoe (742 metres) and Loch Leven. 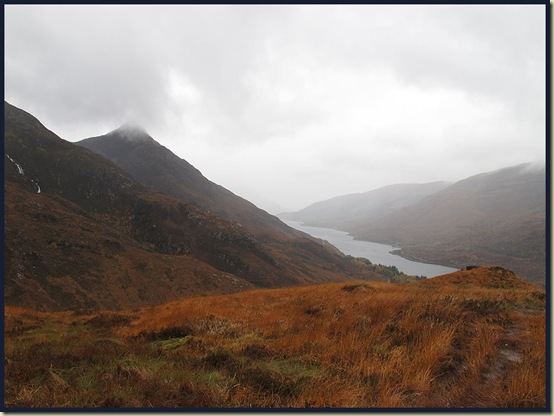 Waterfalls streamed off the back of Aonach Eagach, but there was little to see from the cloud laden summit of Garbh Bheinn.

There was nothing there to give reason to linger, so I turned on my heels and slithered carefully back down to Caolasnacon, and back to Fort William for lunch.  It was still raining. 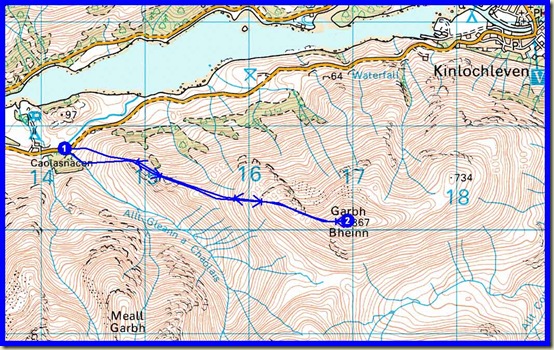 A pleasant evening with the small residue of TGOC visitors was followed on Monday morning by some au revoirs as we all headed off after an excellent and highly sociable reunion.  The Alexandra Hotel is an excellent venue.

I parked up near Kings House Hotel, from where the Stob Dearg summit of Buachaille Etive Mor stood proud in the winter sunshine. 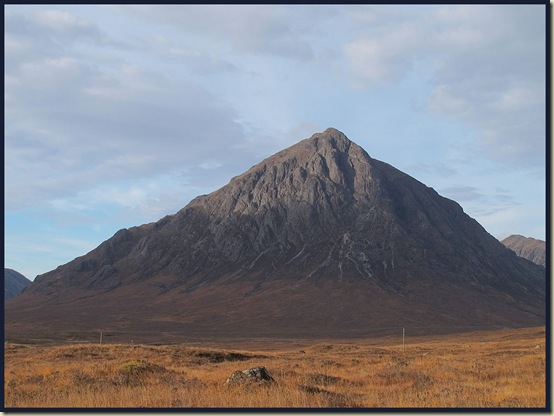 Beinn a' Chrulaiste was my target for this quick excursion on my way home.  Whilst a longer walk than yesterday’s, my 600 metre ascent over 5 km was easy and pleasurable, as I took the good path up Coire Bhalach to reach the minor col that overlooks Blackwater Reservoir, then ambled west then south to reach the broad 857 metre summit.

There were red deer on the summit ridge - noisily rutting today – and the three ptarmigan I saw on Sgurr Innse on Saturday seemed to have recovered my scent up here!

From the ridge there were good views to Blackwater Reservoir and the Mamores; this is a great viewpoint for TGO Challengers as many will be able to trace their routes across the northern horizon.

However, the best views are arguably those across to the summits of Buachaille Etive Mor, pictured at the head of this posting, and below. 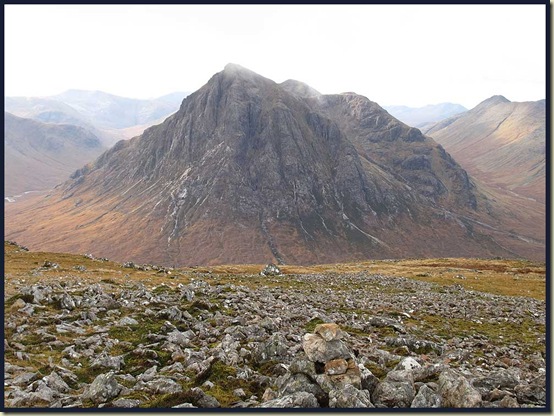 Panoramic views extending from the Black Mount, across Glencoe, and around to the Mamores, make this summit a brilliant viewpoint.

A vague path leads easily down the hill’s ESE flank and back to Allt Bhalach for the final stroll down to Kings House, of which establishment the path provides a bird’s eye view. 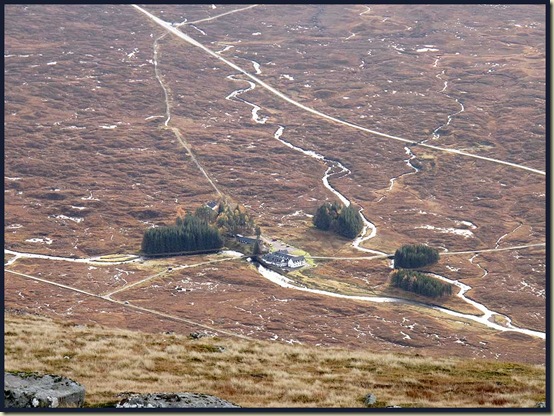 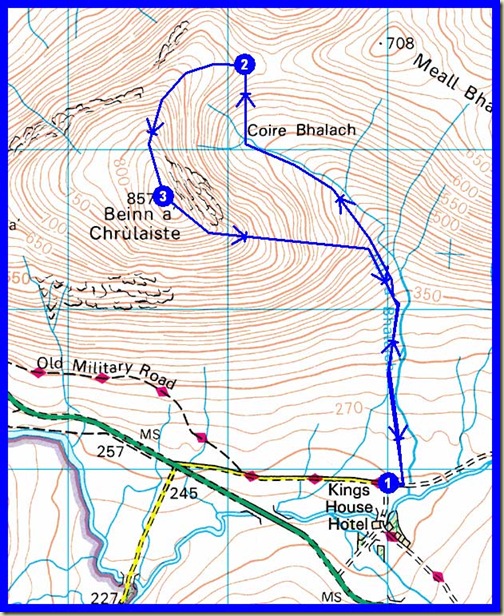 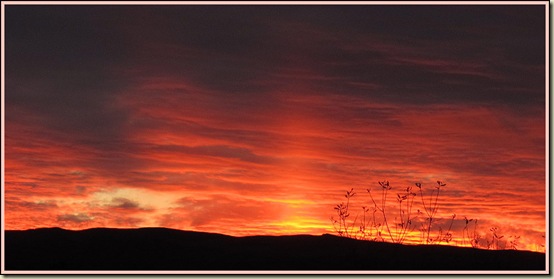 There’s a 49 image slideshow for this trip, click here.

* Some had walked to Fort William.  Colin Tock, for some reason, had arrived from Ardnamurchan, and John and Sue Plume arrived hotfoot from Inverness.  Well done all concerned.