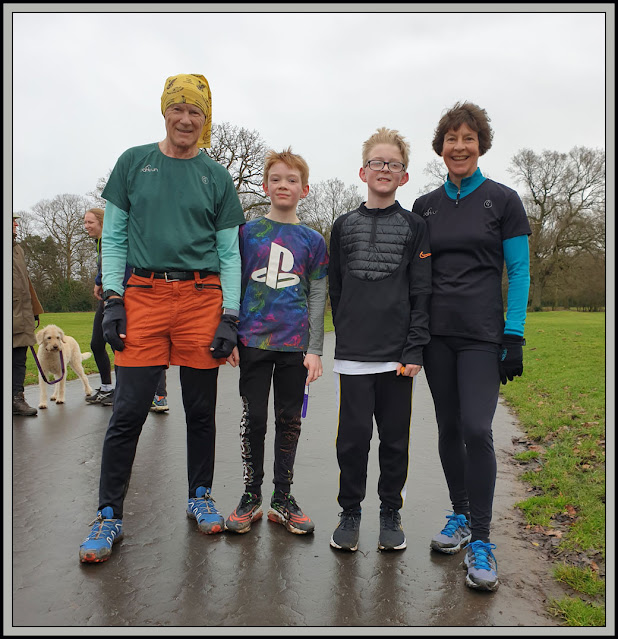 Here we are, pictured after finishing today's local parkrun. Sue and I had enjoyed an overnight visit from grandson Jacob and his mate, Seb.

Seb turned on his turbo-charger and made it around the 5km course in an excellent 24:53, a PB for him in his 5km running career - well done Seb. I tried to keep up with him but failed. Sue kept Jacob company and they were even further behind. But we all enjoyed the outing, and that's what really matters.

Here's Jacob, sprinting to the finish. 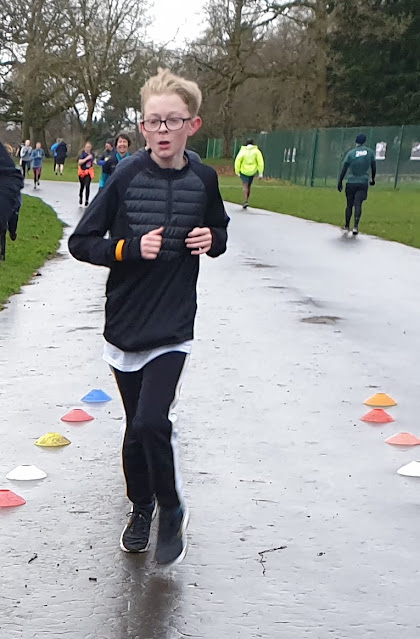 Seb went back down the course to keep Sue company on her rather slower sprint to the finish. 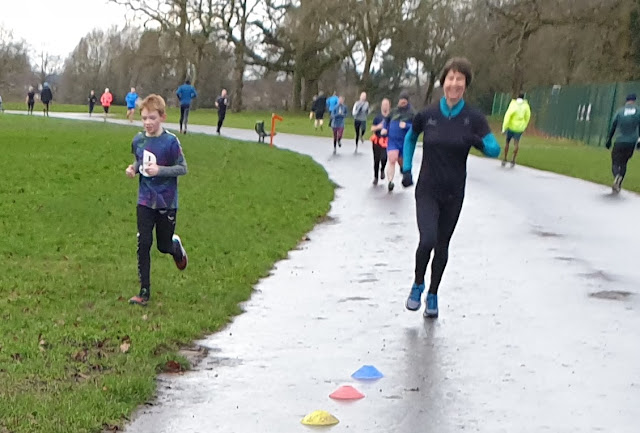 The we all went to the cafe and after all the runners had finished we sorted out the 201 finishers' barcodes ready for them to be handed out to next week's finishers.
Here are Seb and Jacob, playing Pokemon before the barcode tokens arrived. 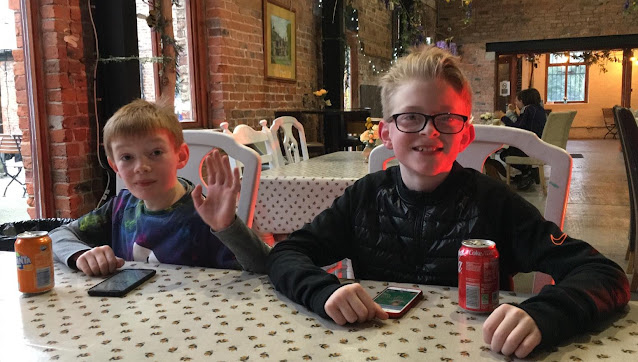 Then it rained, so we were very lucky to have enjoyed the run in good conditions.
Full results are here.
Posted by Phreerunner at 21:59 2 comments: 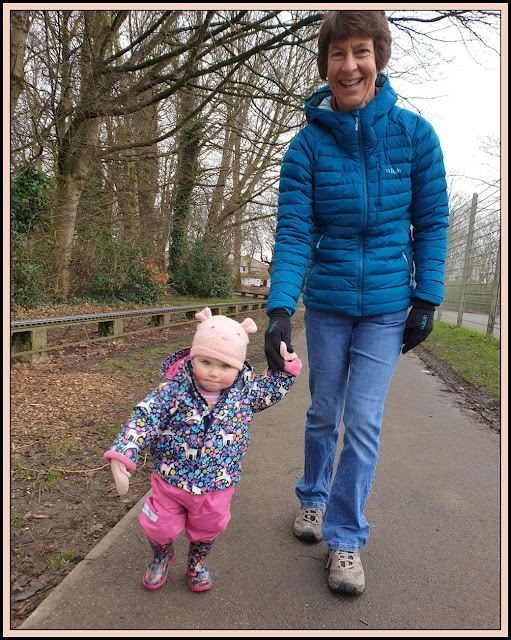 Heading purposefully to the swings in Walton Park 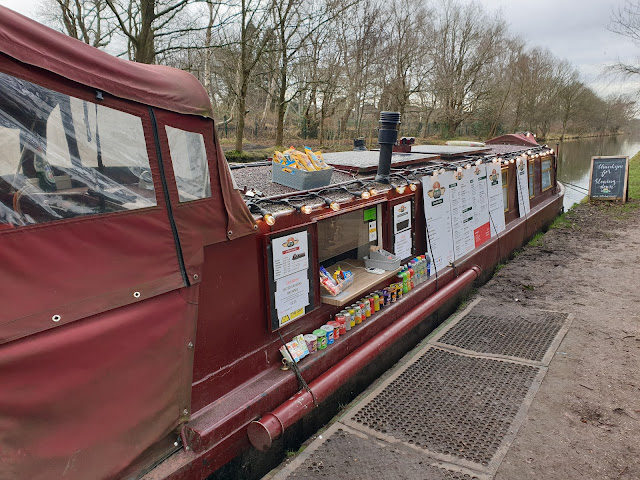 But not forgeting cappacinos from the local cafe 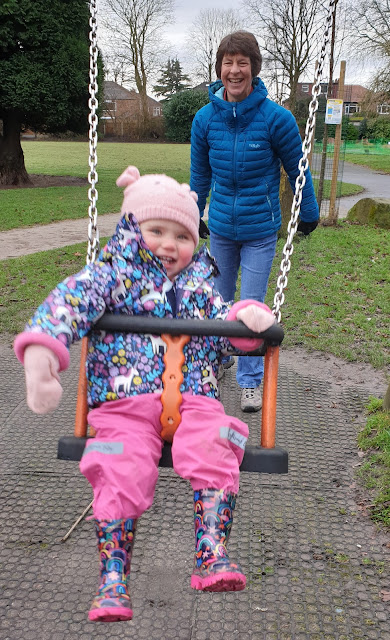 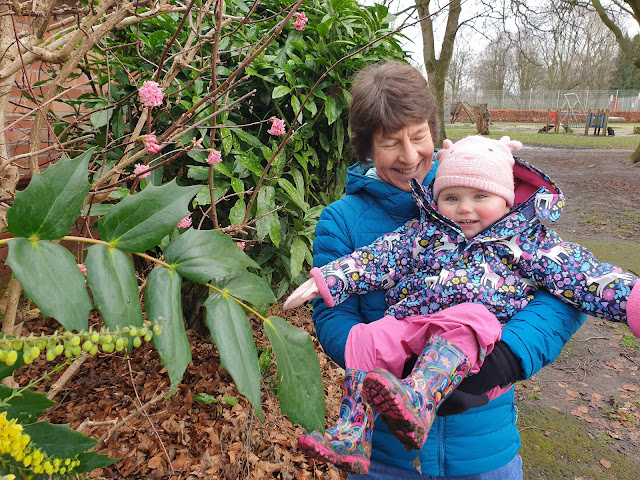 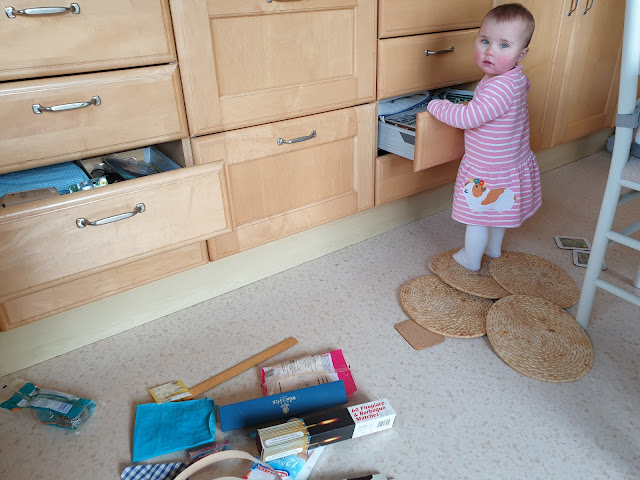 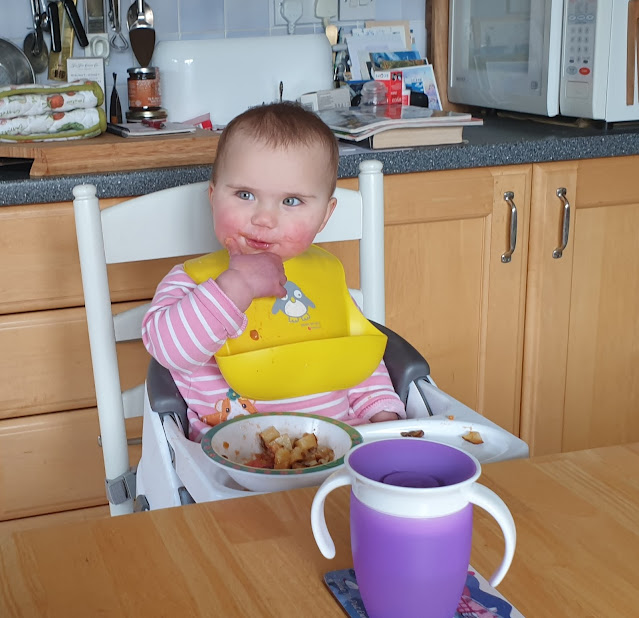 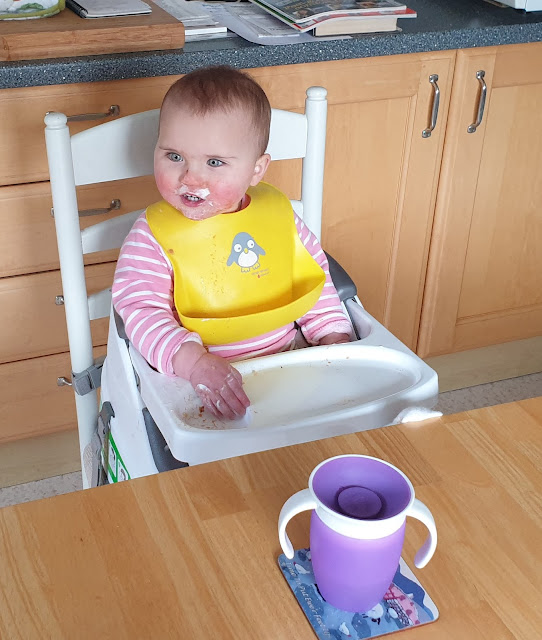 "And now I need more yogurt, banana and mixed fruit!"
The afternoon nap can be a bit of a struggle to bring on, requiring the calming influence of Eric Newton's clarinet, and some 'Relaxing Melodies for Jazz Guitar' from another well known musician...
Posted by Phreerunner at 21:25 2 comments: 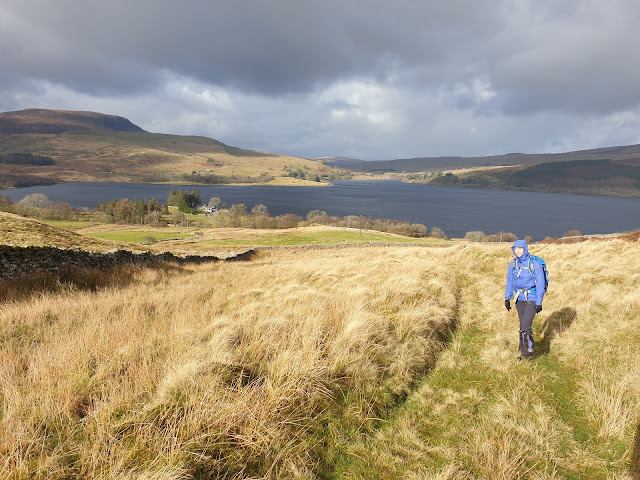 Under the slopes of Arenig Fawr, we walked to the eponymous small reservoir that was the target of this route. There's a small dam, and a bothy that could accommodate three people. Far below, and pictured above, is Llyn Celyn, a large controversial reservoir created for the benefit of Liverpool. A village was drowned and the opening ceremony for the dam became a galvanising force for Welsh nationalism.

Good to end this trip in bright sunshine. More pictures etc will appear here in due course.

Posted by Phreerunner at 18:24 No comments: 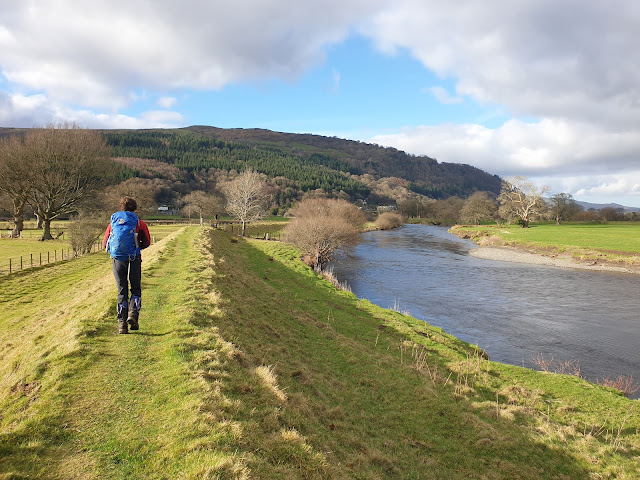 Today's 10km walk from Trefriw featured, at last, a decent quota of sunshine. After a coffee break at the café opposite the Fairy Falls pub, we set off past the falls and over a high footbridge with a bird's eye view of them.

Beyond this we climbed to paths through forestry, with views across to Llanrwst and back to Trefriw, before arriving at a car park from where there are some enticing looking mountain bike routes. Many blackbirds and robins were rummaging for goodies in the leaf litter.

En route we had diverted to admire the Grey Mare's Tail waterfall, one of seven so named cascades in the UK, the rest being in Scotland. We've paid good money to view less attractive falls than these - the diversion was most worthwhile.

Then it was down to the river for a good stroll in the sunshine, all the way back to Trefriw, much of it on an embankment that is intended to contain the river when it's in spate. Other walkers were about today, including one local man with whom we had a long chat.

A stone bench provided the best lunch spot of this trip, with nuthatches and tits nearby, and woodpeckers chipping away in the distance.

On return to base in Porthmadog, we had time to enjoy a leisurely afternoon, admiring some of the wildlife in the estuary, which today includes little egrets, oyster catchers, wigeon, redshank, a variety of ducks, and a number of small unidentified specimens.

Posted by Phreerunner at 16:30 No comments: 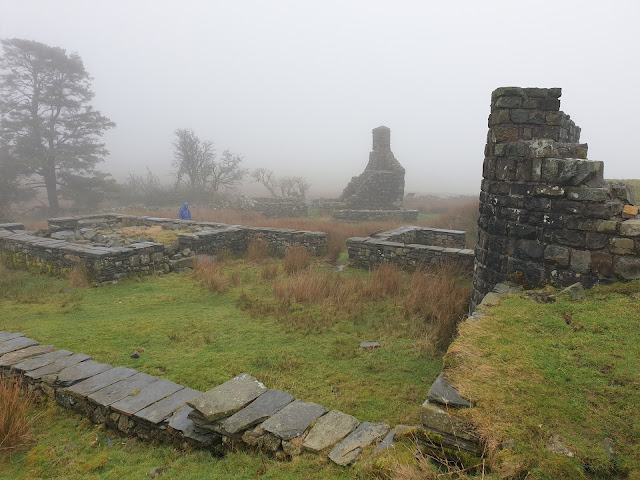 Mist, but no rain, was our companion on the second day's outing during which we have seen no other walkers.
We started from the car park at Tomen y Mur, a Roman fort, pictured above, that must have been one of the most desolate postings in their empire.
Its history extends to the Dark Ages and the Norman Conquest right up to the Welsh princes and the many myths that surround them. An interesting spot.
Once we had explored the antiquity, we headed along ancient sunken farm paths nearly as far as the A470 main road. This took us below the cloud to the site of a disused railway. We then rose along farm tracks, leading to moorland. We marched across this, imagining the splendid views that would be available on a day with a higher cloud base.
Above 300 metres the wind was brisk and cool. We were back at the car, after a 9km stroll, in time for a cosy lunch therein. There was then a wait for the interior to demist before we could embark on the ten mile journey home, for the pleasure of a relaxing holiday afternoon, watching the numerous birds feeding in the estuary.
Posted by Phreerunner at 16:08 No comments: 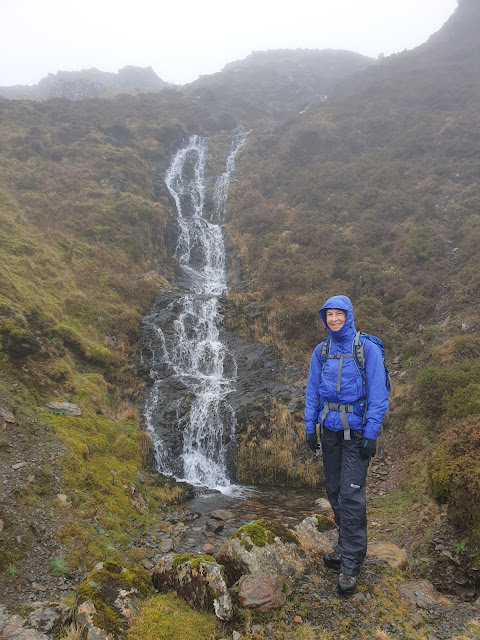 After enjoying coffee and cake in the Roberts cafe in Dolgellau, Sue and I drove up to Rhydymain for a 11km jaunt in mist and light rain.
There should have been good views to Rhobell Fawr and other summits, but we were foiled by low cloud today. So this is a walk we'll have to revisit.
We did see frolicking lambs, three buzzards and a kestrel, as well as flocks of small hedgerow birds, and there's a green tinge to the hedgerows as the first leaves of spring emerge - blackthorn perhaps - to join the catkins that are in evidence in all the deciduous woodland.
Back in Porthmadog, we can't even see across the Cob to Portmeirion. The cloud really is down!
Posted by Phreerunner at 16:18 No comments: 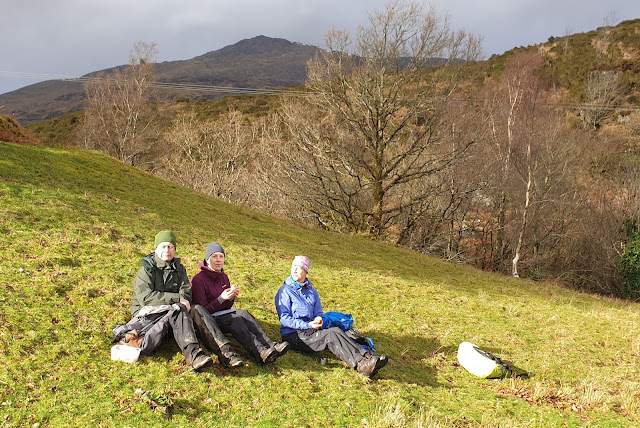 Another good walk with Richard and Jenny. Our 10 km circuit from Dolwyddelan on a cool, breezy, day even found a bit of sunshine as we ate our lunch near the medieval castle, with Moel Siabod lurking in the background. There's very little snow on the mountains despite the time of year.
This was walk number 9 in Alex Kendall's 'Snowdonia North' guidebook.
Posted by Phreerunner at 16:03 No comments: