An evening walk from Hollingworth Lake, accessed via signposts from the Milnrow exit (21) on the M62.

On a lovely evening, we joined the bikers outside the Wine Press, on the B6225 beside the lake. 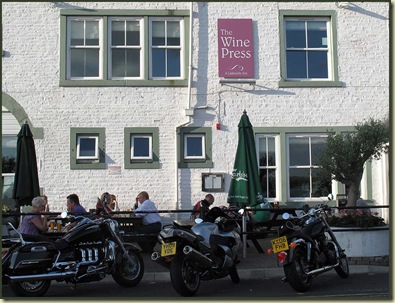 Hollingworth Lake was built nearly 200 years ago to provide a water supply for the Rochdale Canal.  The large, non-drinking reservoir soon became a tourist attraction, with dance halls, billiard rooms and brass bands.  In the winter of 1860 nearly 2000 skaters swarmed over the ice.  It retains its popularity, though mining activities in the surrounding countryside have long since ceased, leaving peace and quiet and golfers.

Today the lake was full of little boats chasing each other around a marked course, with the M62 in the background. 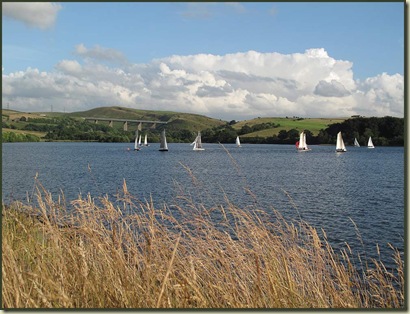 Our route went down Rakewood Road past the Visitor Centre (pay and display parking available), and beside the blue railings by the lake.  The first left fork led us up a cobbled bridleway - the Pennine Bridleway - 'summit 4½ miles'.

Beyond the C18 hamlet the track continues with twin rows of flagstones, heavily grooved from horse-drawn coal trucks from the mines ahead. 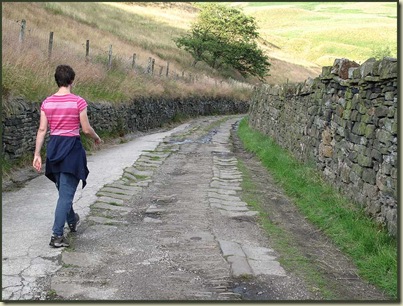 Soon we passed Syke Farm, over 200 years old and showing it, though a recent guide book describes it as 'grand'.  The once impressive facade includes a fountain, gas lamps and this public telephone box. 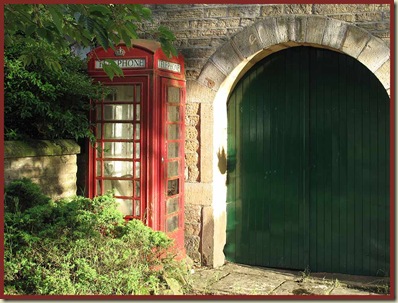 The area is littered with public rights of way, with footpaths for all tastes

What's with the bollards? 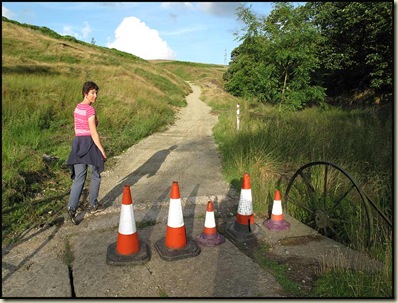 The other day I chanced upon a TV programme about 'William Eggleston, one of the most influential and original photographers alive today'.

It showed the famed photographer pottering about, snapping at anything, showing apparent contempt for composition.

Other 'eminent photographers' raved about his work.

I thought the programme was a hoax until I checked out this guy on the internet.  I've adapted the above image to Eggleston's style: 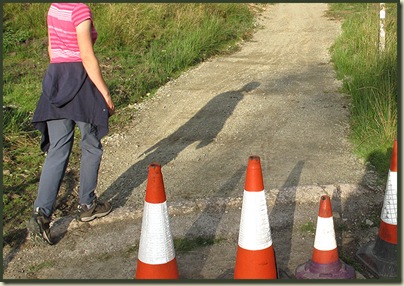 I don't think I'll ever make it as a photographer!

Enough of that.  The path passes to the left of the minor hump of Benny Hill, then zigzags past flittering goldfinches, left and right to reach a pylon.

The view to the left (north) is over the moors, with their numerous concealed reservoirs, to Todmorden and Calderdale. 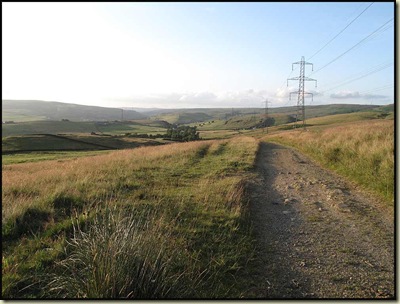 Whilst to the right the pylons march over the M62, which is very close by but completely hidden and surprisingly quiet. 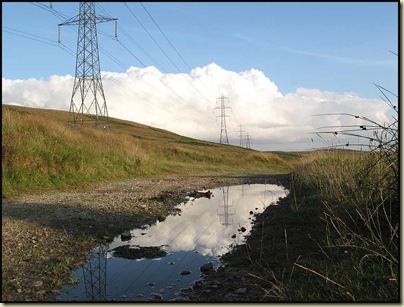 This is Clegg Moor, where our route turned left to follow the line of pylons, with Hollingworth Lake now far below, and the skyline of Rochdale beyond.

A surfaced lane was reached.  This lane leads to Whittaker Golf Course.  Our own route continued along the lane in the same direction, passing a boggy area known as Salmon Well.  Then a sharp left turn led down a track and through a gate to a path beside the golf course, which was donated by a wealthy mill owner in 1905 on the understanding that it would always be used for golf.

Today, foxgloves graced the banks beside the pathway. 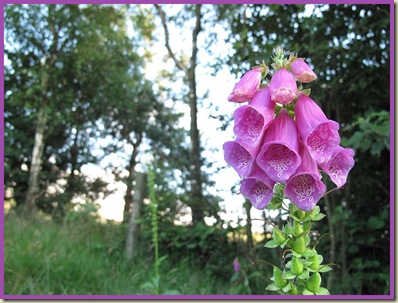 Even white ones, which may be unusual, or an escaped garden variety? 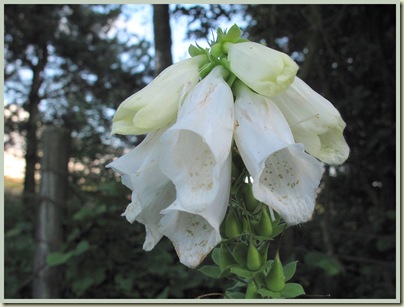 The path headed on by the golf course - we even found an errant golf ball - through a kissing gate then over a broad stone slab covering a watercourse ('drain') that once supplied the nearby Rochdale Canal with water pumped from the lake.  Keeping straight on down to a footbridge, we continued towards woodland and a cottage where this three legged cat suggested we follow the path around to the right. 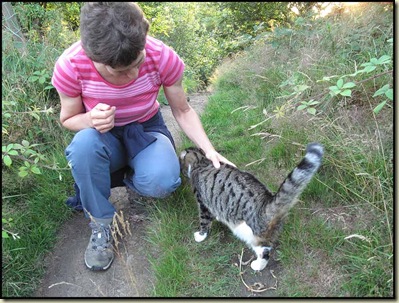 This brought us out at a lane beside Hollingworth Brook from where a left turn took us over a gritstone slab bridge and along the lower lane, passing the visitor centre before reaching familiar ground at Rakewood Road.

We had only seen a couple of cyclists all evening, but there were a number of people around the visitor centre, and many more bikers outside the Wine Press enjoying the last rays of sun reflected from the hillside across the lake.

Tall melilot (Melilotus altissima) was waving the boaters off to bed. 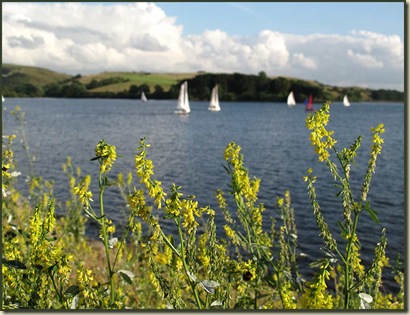 You should be able to amble around it in about an hour and a half. 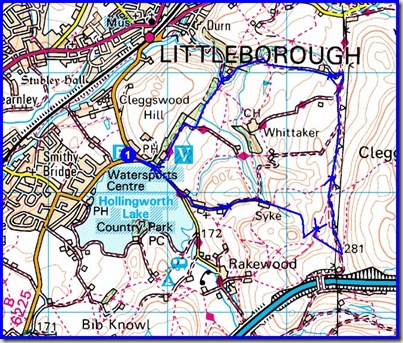 Hut to Hut in the Ligurian and Maritime Alps 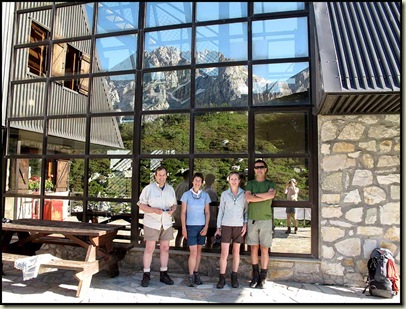 This is the final 'Maritime Alps' posting, and will be used for the insertion of an index and cross references.

The route we took - actually mainly in the lesser known Ligurian Alps - is absolutely brilliant for a one week hutting trip, and we intend to write up all the salient information on a separate web page shortly.

The image shows our group preparing to leave Rifugio Garelli on 7 July, and reflects the Marguareis peaks in the glass frontage of the 'hut'.

Posted by Phreerunner at 16:50 No comments:

Here's a picture taken by Sue from the 'Headstone Col' above Rifugio Don Barbera on 8 July, looking west towards the Maritime Alps.

Apologies to Google 'readers' who will notice some messing about with the entry for 9 July (now here), due to my discovery today that it didn't transmit at the time.

Posted by Phreerunner at 10:11 No comments:

A Star is Born 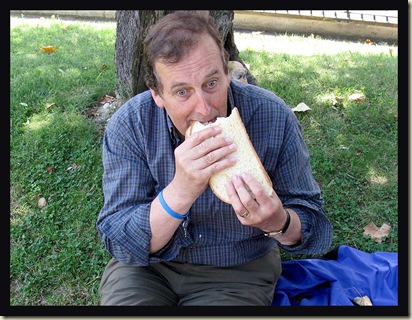 Still with no newspaper in sight, Andrew tucks into a light snack today on his way home from Wilmslow swimming pool, having inadvertently left the rest of his meal in his locker....

....or does anyone have a better caption?

Nice - Gateway to the Maritime Alps 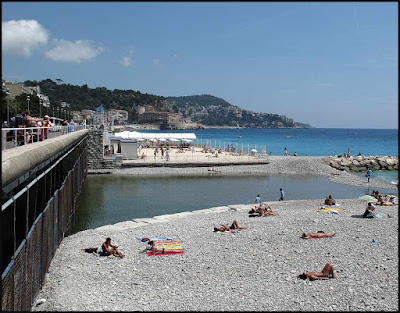 Sadly, the gate is now shut until next time. 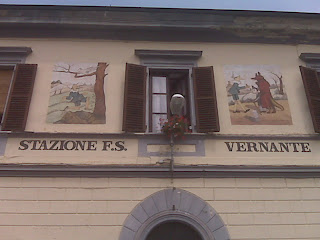 The Inglese assault of the GTA today lost five of its eleven participants as our little faction made its way back to Limone.

I had anticipated a bus journey to Vernante today, but (there was no obvious bus and) the weather was fine, so the four hour walk via path L26 and 'La Via di Téit' looked a much better option.

Despite Notchy's difficulties the chosen route was most worthwhile. It was mildly challenging at times both in terms of the terrain and the route finding - occasional yellow paint flashes on trees and rocks encouraging us onwards.

As Richard remarked, we were above, below and in the snowline all at once at times, as we found our way through a chamber of ice that had made way for the passage of a stream and, today, ourselves.

Our negotiation of the path was somewhat agricultural at times and whilst Notchy was having his own, previously documented, problems, others were having fun with nettles and branches. "Oooh" exclaimed Jenny as the other end of a branch that Sue had trodden on swished some nettles up her shorts.

Further round the valley the difficulties eased and our attention turned to the luscious strawberries and the sturdy specimens of many types of fungal growth.

A viewpoint beckoned. Whilst the rest of us were perfectly happy with that offered to the simple tourist, Sue scooted up an old wooden ladder, tacked together with rusty nails, for a slightly better vantage point.

"Scariest bit of the whole trip", she admitted, after sliding back down the ladder.

Finally, a descent through more lovely woodland brought us out in the small town of Vernante, where a few metres down the tarmac the friendly Hotel Martinet did us proud for beers and lunch, to celebrate the end of this delightful route.

A flashy train took us on the 10 minute trip back to Limone.

R + R followed for the others, whilst Sue and I nipped up 500 metres to Collette Almellina in a futile search for my misplaced walking poles.

An adequate meal at a pizzeria was followed by Yoyopartyband's 'Saturday night in Limone' concert, in the main square. The cycle shorts clad singer was mostly in tune and Sue and Jenny joined the prancing children in front of the stage for a while. It would have been foolish to retire earlier, as the beat easily penetrated our hotel rooms - a precursor to the later burble from St Patrick's bar and the Lanterna Club.

Posted by Phreerunner at 14:45 No comments: 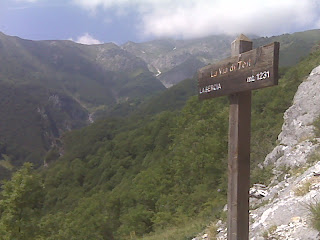 This, sadly, is the final high level view from this trip.

La Via di Téit is a high level (approx 1500 metres) section of the L26 path from Palanfré to Vernante. It traverses a deep valley and perhaps formed an ancient mule track between the two places. It's a finely constructed way of passage. These days it appears to be used only rarely.

Our group of five comprised today's rare visitors. There was nobody else on the path, which was poorly maintained and not without obstacles - mainly deep vegetation, fallen trees, snow filled gullies, and landslide/avalanche damage.

Most of us managed to surmount these obstacles without too much difficulty, but we all now sport rashes of nettle stings, and Notchy (Andrew) looks as if he's been in a mud fight.

He had an eventful traverse, at times echoing the curses from Cardiff of the English cricketers.

"F**k" he pronounced from his soft new bed, after stumbling gracefully into a large clump of nettles.

"B****r!" was the vocal exclamation as he stropped his rucksack over the delicately poised and intricately woven branches of a large tree that had once stood proudly a few metres above the path across the steep hillside.

"******* ****" "I'm a goner this time", he swore, waving his feet a few inches above the stream below the bergshrund that he had gracefully entered via his slide down a wall of clay. He flapped uncontrollably for a while, pinned under the snow by his rucksack, until a few deep breaths facilitated his escape.

Eventually the head of the valley was reached, and Notchy emerged, battered, bruised, nettle rashed and muddied, but giddy with relief and jubilant at having made it to 'firmer ground'.

Sent using BlackBerry® from Orange
Posted by Phreerunner at 12:21 No comments: