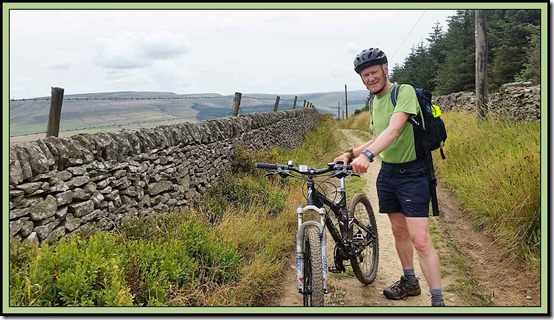 In preparation for another trip, a bit of bike fitness has been deemed appropriate.

1. So on Monday I enjoyed a routine hour long 19 km circuit - along the canal to Stretford, then along the Trans Pennine Trail (TPT) to re-join the canal at the site of the now sadly defunct Bay Malton pub, where the bridge (see here) is still being repaired, before returning home on the towpath.

I checked out the underpass at SJ 787 936 that Conrad struggled through last week. It's down a narrow unmarked footpath that leaves the TPT, re-joining that trail shortly after exiting the mud. Here’s the entry to the underpass. 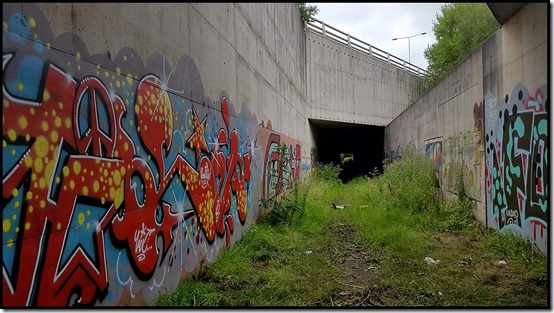 And the view through the mud… 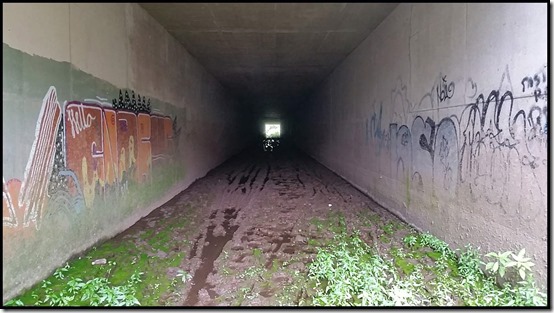 I suppose a warning sign would be helpful, but I imagine most people would be less brave than Conrad, take one look at the mud and return to the TPT, which crosses all ten lanes of the M60 motorway via a smart footbridge just a little further along the trail at SJ 784 936. 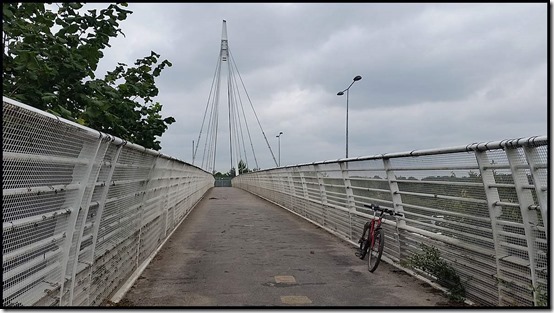 Here’s the route that I regularly cycle for a bit of exercise. It’s flat, 19 km, and generally takes me rather less than an hour. 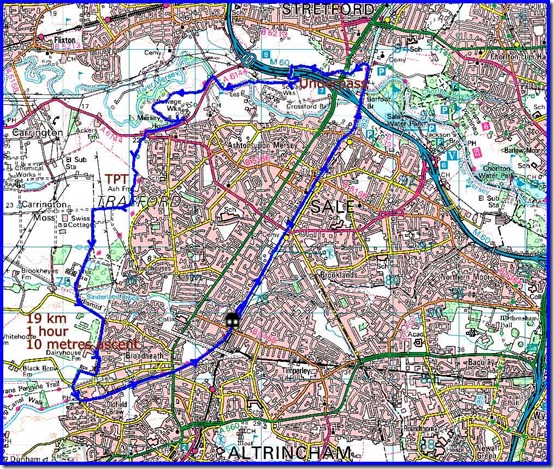 2. Tuesday saw me taking the Bridgewater Canal towpath past Waters Meet all the way to the Throstles Nest Bridge. The area around there is full of construction work - the Wharfside area of the tramline extension to the Trafford Centre.

My route follows the Ship Canal as closely as possible along cycle lanes past the BBC studios to Eccles, then down to the Barton Swing Bridge before returning to Waters Meet along the Bridgewater Canal towpath past the Trafford Centre. The last 7 km is the reverse of the first 7 km - the stick of this 'lollipop' route. 26 km with about 40 metres of ascent, generally taking about an hour and 20 minutes. 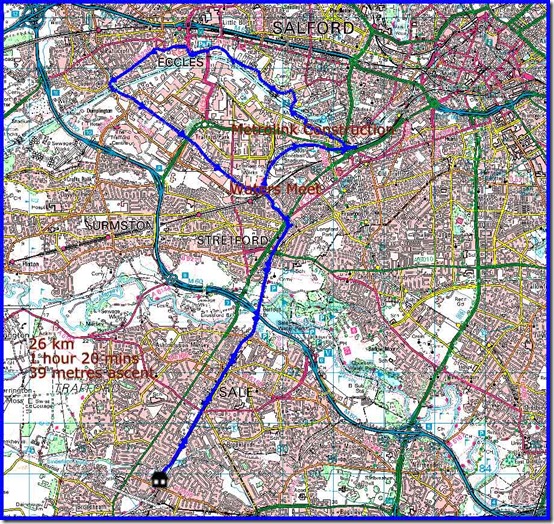 3. I enjoyed a longer ride on Wednesday, picking up the TPT at Stretford and following it through Stockport to join the Peak Forest Canal beyond Haughton Green and return via the canals of the Cheshire Ring through Manchester city centre. 60 km in a shade over four hours, and back home in plenty of time for lunch. I wrote about this route in more detail here, and elsewhere.

The sad ruins of the Tatton Arms in Northenden continue to be a Blot on the Landscape. 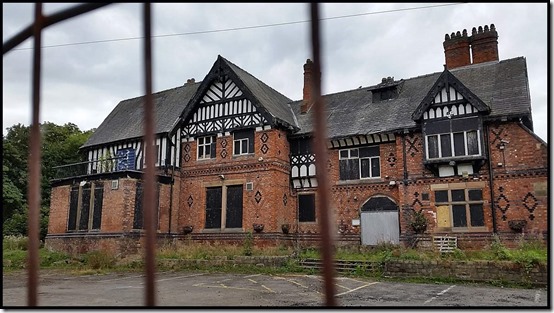 Some bridge works have led to a diversion that didn’t affect me, as I got a bit misplaced in Northenden. 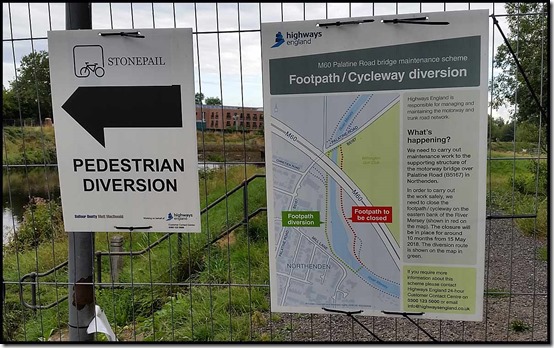 The closed path is on the right in the next picture, taken from the footbridge pictured below. 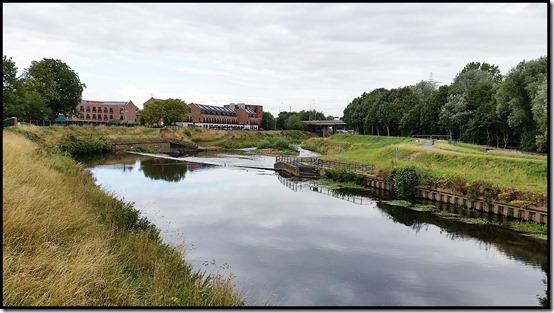 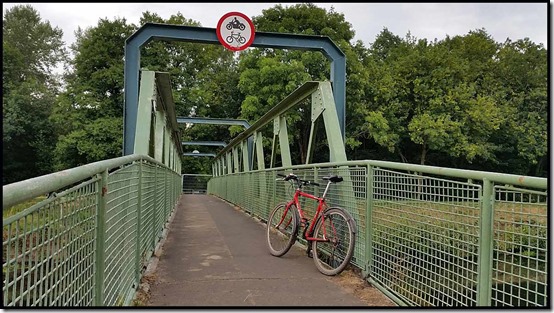 About half way round this circuit is an elevenses bench where there used to be a picnic table. Never mind, I rested in the company of a dog walker with a view of rampant ragwort and rosebay willowherb. 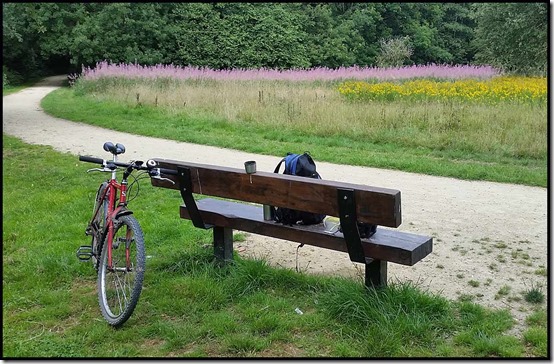 Looking back over previous trips, it’s interesting to note that I always seem to take photos from the same spots, as in the next two pictures, taken where the Peak Forest Canal meets the Ashton Canal. One day I’ll stop and visit the Portland Basin Museum and enjoy some refreshments at the café next door. 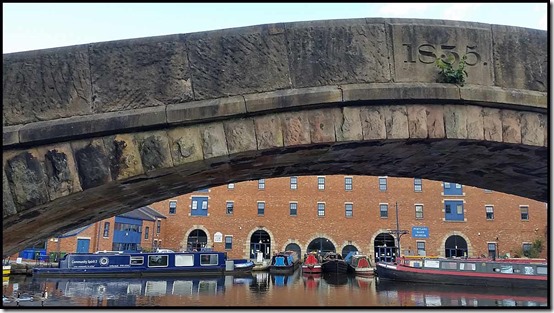 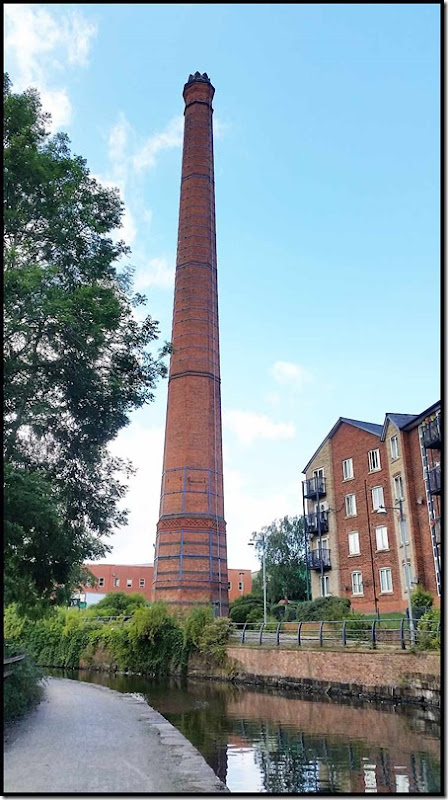 A little further on, Guidebridge Mill, built in 1884, was the second mill built at the this site - the first, built in 1876 was demolished around 1938. Later mills such as this one were built with flat roofs, which could be used as reservoirs for the sprinkler systems. The mill building now houses various diverse businesses. 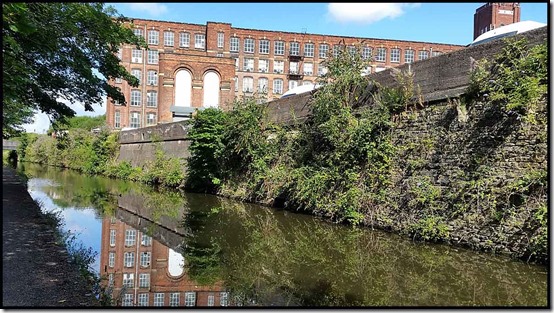 The northern stretch of the Peak Forest Canal was rather evil in odour, with a greasy film on the water, but the Ashton Canal was refreshingly cleaner, providing good reflections of some of the barges that live there. 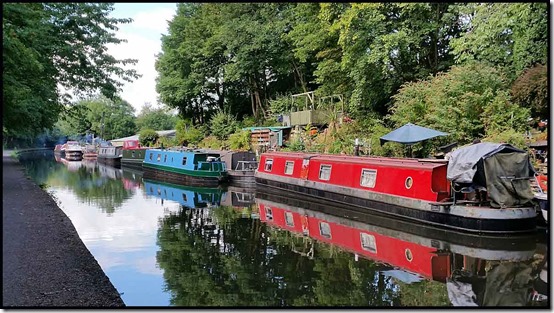 I managed to find my way through Manchester centre, where you have to leave the towpath for a while. There were lots of people around, making it slow going.

Around Old Trafford, the orchids have died away, to be replaced by the bright yellow flowers of Evening Primrose. 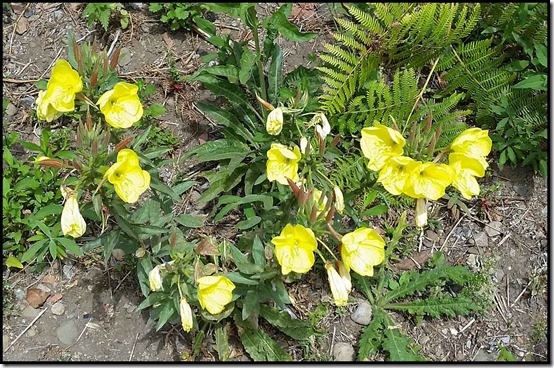 Here’s an overview of the route I took, which varies every time I do this ride. Today it amounted to exactly 60 km, with about 200 metres ascent, taking 4 hours or so including stops. 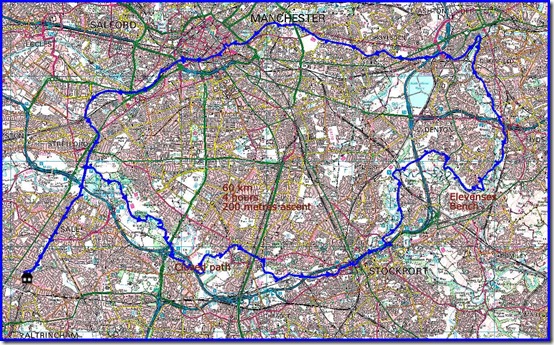 4. On Thursday I was joined by Richard for a ‘Big Macc Ramble’.

I’ve been cycling this route every now and then since January 1996. Reports since 2008 are here. They include a report on my first outing on ‘Stumpy’ in 2011. The chain broke. Today Stumpy was rather off colour again. The front brake was sticking, making progress rather hard work, but I wouldn’t have been able to go at Richard’s pace anyway, and at the end of the ride the rear suspension decided that it was to be set in the ‘on’ position all the time – a bit tedious as that suspension is only needed on bumpy downhill sections of track.

We took three and a half hours over the 23 km route, but that included lots of stops. My moving time was about an hour less than that, and Richard’s would have been a lot less, given the number of ‘waits’ he needed for me to catch up.

Notwithstanding all this, and the road closure that blocked the usual route to Langley, and the road closure on the A54 that blocked just the short section we needed along there, and a diversion due to logging in the forest, it was a good ride in fine weather. I was pleased to manage to cycle up the steep section to Nessit Hill, from where the following two pictures were taken before our swift descent to Trentabank that now includes some easy singletrack (bike only) paths. 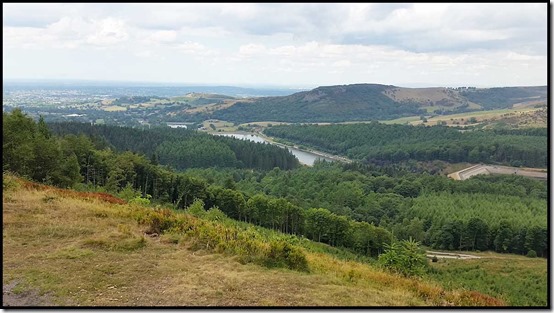 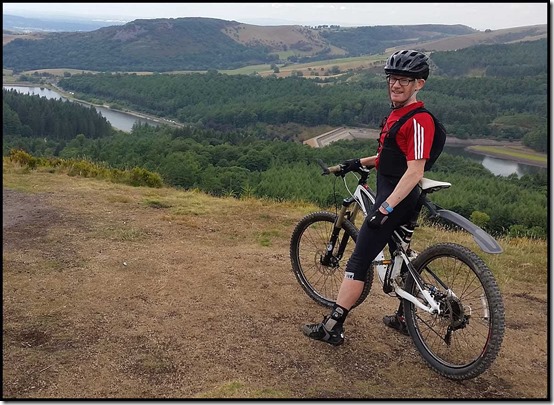 The header picture was also taken on this ride, on Charity Lane before the rough descent to Macclesfield Forest hamlet and a traditional break on the bench outside the chapel.

Here’s the 23 km route, which includes about 600 metres ascent. A good workout, especially with a sticking front brake, and thanks for your company, Richard. 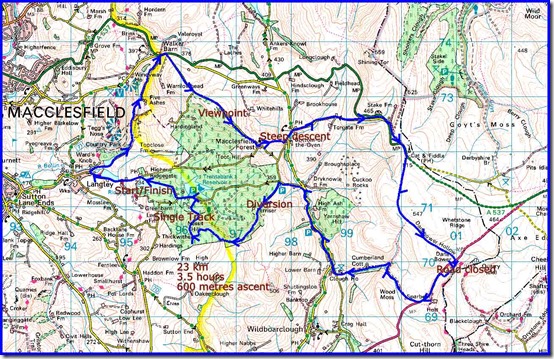 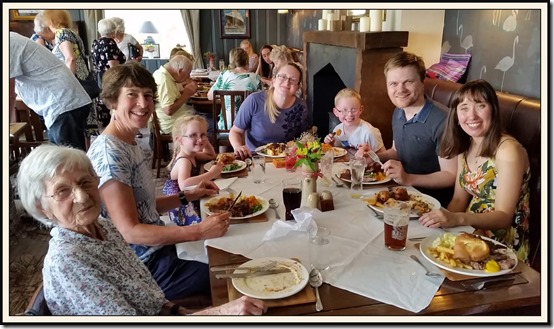 One of Great Grandma Dot’s pleasures in life is taking members of her family out for an occasional meal. The Hollybush at Seighford is a favourite venue, with the Sunday carvery providing excellent food at a reasonable price. On Sunday Sue and I visited together with Mike and Sarah, and Kate, Jacob and Jessica dropped in for lunch en route from Bacup to Chessington.

Everyone was very well behaved. Great Grandma must have been hungry, as she seems to have cleared her plate before some of us started eating!

A very happy occasion, and thank you Dot for hosting another excellent gathering. Long may they continue, and we hope the more youthful members of the team enjoyed Chessington. 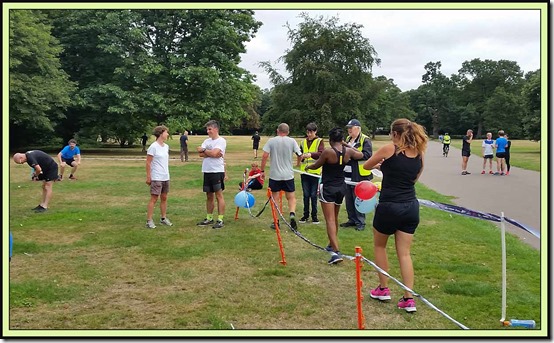 “Didn’t you do a parkrun yesterday?” demanded Dot when we visited her yesterday.

In what have become the usual firm, dry, warm conditions, some 261 runners braved the tree roots of Wythenshawe Park to experience the 350th appearance of this parkrun, on its seventh birthday. Run Director for the day, Jenn, offered a wealth of statistics and gave credit to Paul Muldoon for founding the event, Andy Holloway for his more recent ‘Direction’ and the numerous stalwart volunteers that have enabled the run to ‘prosper’ over the years.

My first parkrun at Wythenshawe was number 18, on 3 December 2011. The event fell outside the scope of my blogging at the time. There were just 17 participants and five volunteers. The majority of those people were present today.

My photos usually show people running, the overseer (Cromwell) or other specifics. Today’s picture, from left to right, shows Ron (puking?), a squatter, Sue and Alastair chatting after their leisurely jogging (actually Sue ran for the first time since February – the Alps have helped her Achilles problem – and spent the run chatting to Cary). Various folk are in the finishing funnel having taken about thirty minutes for the 5km run, and on the far right the sub 20 minute brigade are warming down in a mutual admiration society…

Having not run at all for five weeks, and with a dodgy ankle, I was happy to slowly jog round with Alastair, before adjourning for coffee, then what I hope is my last dose of root canal treatment for a while.

Congratulations to everyone who continues to make parkruns here and elsewhere a success. They have become a highlight of the week for many of us.