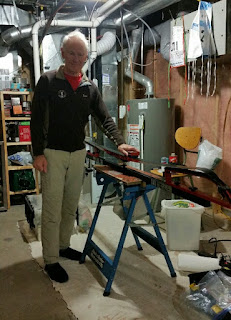 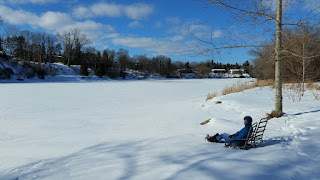 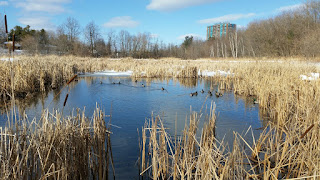 Basically a day off before a long day's skiing tomorrow.
Snow flurries were followed by bright sunshine and a stroll for me and Sue beside the river.
Bibs and timing chips were retrieved from a rather shambolic collection point at a school in Gatineau.
Skis were waxed and pasta duly consumed, followed by Susan's offering for the day, some giant cup cakes, and the last of Ken's tasty birthday cake.
Posted by Phreerunner at 02:51 1 comment: 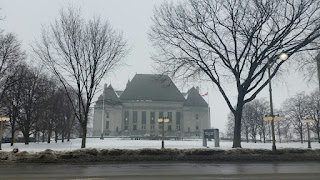 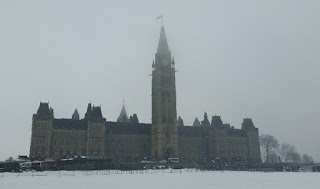 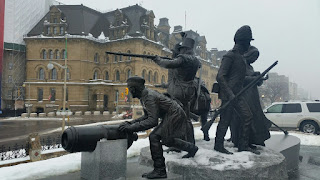 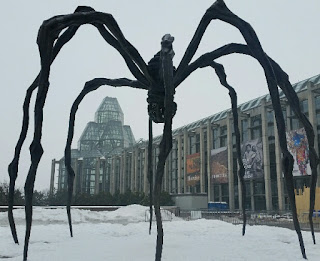 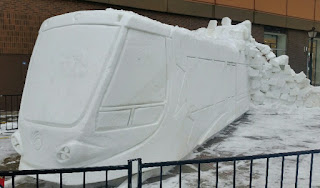 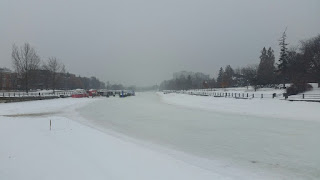 On a rainy day in Ottawa, Sue and Susan chose to indulge themselves at the Nordic spa in Chelsea. They kindly dropped me off in town. After a bit of sight seeing, shopping and lunch, I walked back home via the Rideau Canal and Mooney's Bay. The paths were wet and slippery in the warm temperatures (+6°C) and skiing wouldn't have been that enjoyable today.
A few snaps were taken en route:
The Supreme Court
Parliament Buildings
A War Memorial
The Art Gallery and Spider
An Ice Sculpture
The Rideau Canal - closed today on account of the high temperatures
Posted by Phreerunner at 22:22 2 comments: 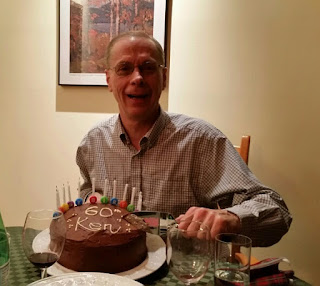 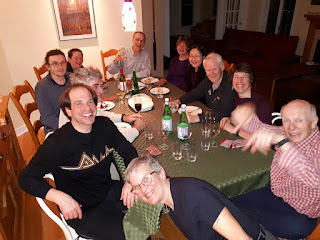 Posted by Phreerunner at 04:13 No comments: 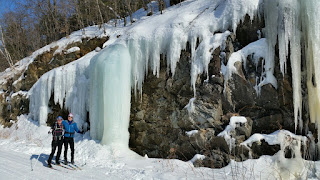 Whilst Shane and Stephen had opted for the 'Parkway Loop' route, Sue, Susan and I had planned to go to McKinstry cabin and the Fire Tower from P12. But despite being another blue sky day, Ridge Road to McKinstry had a thumbs down from the Park management. Temperatures would start at minus 8°C and rise to plus 5°C, tricky conditions for waxing the skis.

We decided on a clockwise trip around the 'Parkway Loop', with Susan on her waxless skis and Sue and I borrowing Helen and Ken's waxless boards. This worked well, albeit Sue complained about having to work a bit harder than usual.

The highlights of the outing were the frozen waterfall on Champlain Parkway, pictured, and meeting up with Shane and Stephen coming the other way up Fortune Parkway. Stephen was proudly displaying some new skis with 'skins' on them.

Lunch in Tonique Restaurant in Chelsea was good, but allow plenty of time if you go there...

A leisurely afternoon will be followed by 'Party Time'. Ken has a big birthday and the five of us will be joined by S and S, their hosts Lester and Lynette, and our old friends Michael and Sayuri.

Sue is busy decorating a cake... 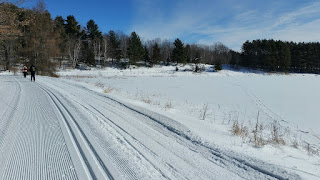 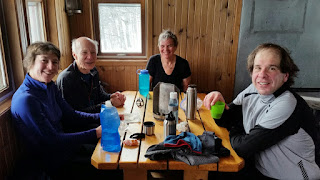 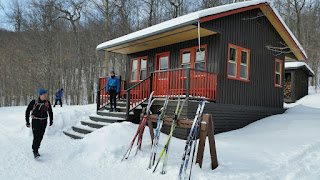 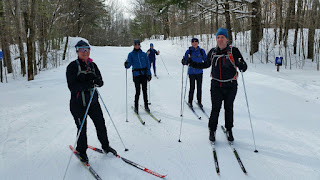 A blue sky day, at first anyway, found Sue, Susan and me meeting up with Stephen and Shane at P19 - Lac Philippe - car park. Thankfully Stephen's gear had all found its way to the start today.

The trails were icy and fast downhill. Waxing was tricky and despite moving from light blue to blue, Sue and I still had very little grip by the end of the day. Stephen and Susan fared better with their waxless skis, and Shane's skins seemed to work ok.

We met a coach load of school children at Renaud Cabin, taking a break before setting off to set up some quinzees (like igloos) for an overnight adventure.

Lusk cabin was toasty warm for a leisurely lunch, after which Shane and Stephen returned direct to P19 whilst the three of us took a slithery alternative down trail 51, which despite its gentle gradients was 'nur für guebte' today.
Posted by Phreerunner at 03:09 No comments: 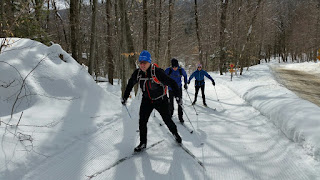 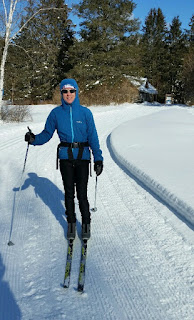 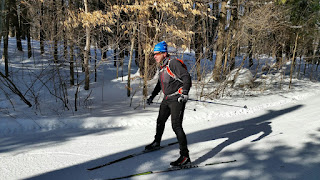 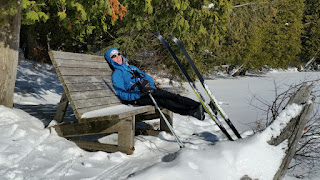 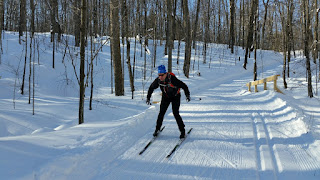 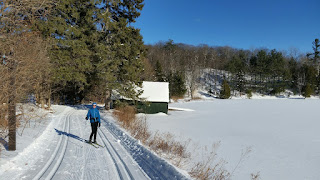 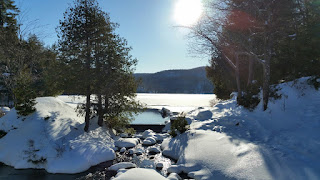 After freezing rain yesterday evening, it was fortuitous that the grooming machine had freshly prepared today's excellent trails. Our planned starting time of 10.30 was delayed by an hour after Stephen discovered he had forgotten to load his ski shoes. Replacement kit was hired in Chelsea.

We had Healey Cabin to ourselves for a very leisurely lunch whilst the sun shone outside.

Sue, Susan and I were joined by Shane and Stephen on today's classic trail with wonderful swooping (but not too swooping) descents. They saw a beaver yesterday; today I saw a deer and Sue and I spent some time watching a flock of chickadee type birds high in a tree by trail 36.

The Wellington Gastropub provided an excellent evening meal for all seven of us (the five skiers plus Ken and Helen) tonight.

A great day on the skis, and later...
Posted by Phreerunner at 02:52 No comments: 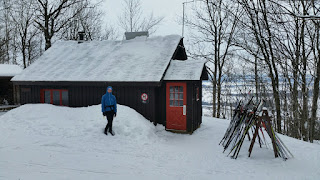 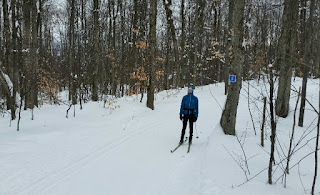 Sue, Ken, Susan and I met up with Shane and Stephen in the vicinity of P7 car park. The latter two skied with us to Huron cabin, via a brew stop at Keogan cabin, before returning to base. (It's unwise to ski too far until the muscles have 'bedded in'.)

Meanwhile, Susan shot off to Western cabin and wasn't seen again until the end. Sue, Ken and I paused at Huron then proceeded to enjoy a leisurely lunch in the warmth of Western cabin, which overlooks the Ottawa River. Sue is pictured outside the cabin, and also later on trail 3 (the Burma Road) that was in great condition in today's relatively mild temperatures - minus 9 to minus 12°C including wind chill.
Posted by Phreerunner at 03:01 No comments: