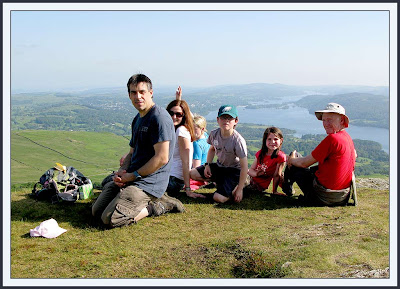 Here we are, in the sunshine with the pixies for a few days of R+R.

I'm taking a short break from mobile blogging whilst we are here, so a report will follow during the course of next week.

Enjoy the sunshine, everyone.

Sent using BlackBerry® from Orange
Posted by Phreerunner at 17:30 5 comments:

A Brief Interlude in Timperley 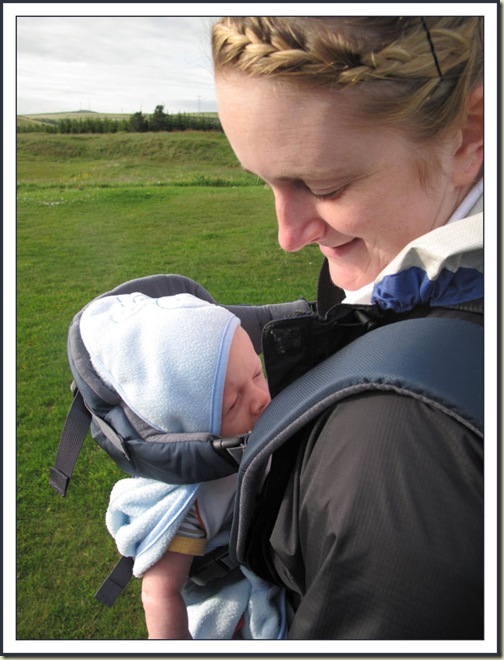 This time we are back at home for 36 hours, rather than 20 minutes, so there has been time to visit grandson Jacob, now six weeks old, to whom I have sub-contracted Webtogs’ latest offering for testing, the Soft III Baby Carrier.

He says it’s so comfy it makes him very sleepy, but he’ll try to draft a proper review shortly!

I see that I have 530 unread items on Google Reader.  I’m afraid they’ll remain unread for a while – I’m loathe to rush through the TGO Challenge reports (not to mention the photos already on the Message Board) and other interesting items, but I hear there’s going to be a heat wave tomorrow!

See you out there, perhaps?

Here’s another view of the Baby Carrier in action. 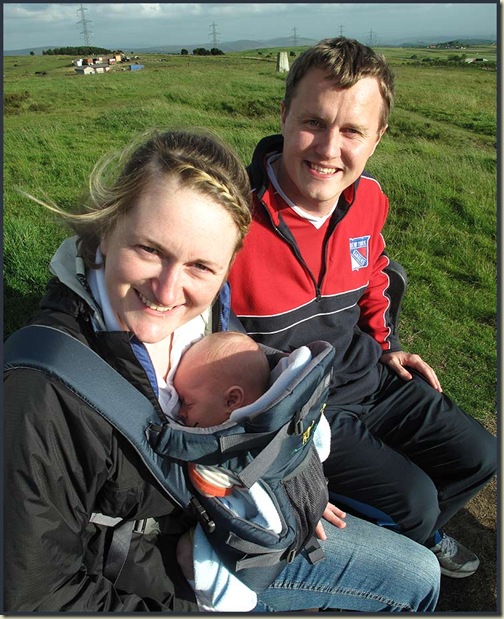 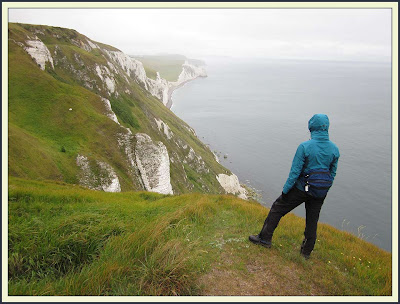 Weather: dreich, in a gentle south coast sort of way.

As expected, today dawned wet. But it was only vaguely drizzly as Andrew, Liz, Jill, Sue and I set off down Weymouth's esplanade past hungry herring gulls that one member of our party thought were albatrosses! Even the beach huts were being tarted up in preparation for next year's Olympics, when the sailing events are being held here. In fact, some of our fellow guests are members of the Spanish Sailing Team, on their fourth 'reconnaissance' visit!

Elsewhere in Weymouth, road changes and other works in preparation for the Olympics have caused sufficient disruption to bring some of the local populace to regret that their town is hosting such an event.
Betty and Dave had gone home due to Dave's need to work, so it was a bedraggled foursome of Sue, David, Gaynor and Hilde who joined the five of us at a typical seaside café at Bowleaze Cove. We'd reached it before the rain strengthened, so it was a rather odd sight of dryish walkers meeting the occupants of a car who looked as if they had been through a car wash with the windows open.

The coast path now rose up some meaningful cliffs as we pressed on towards Osmington Mills and Ringstead. Foghorns blared through the mist; visibility for a while was less than 100 metres - lower than at any point on my TGO Challenge route except Hound Hillock. Yellow iris and honeysuckle glistened in the weak light.

By the time we reached the picture postcard setting of the Smugglers Inn, the weather was clearing, but tables laid out for hordes of Bank Holiday visitors were deserted.

It was only noon, so we eschewed the delights of this place and continued on to a well stocked kiosk at Ringstead, where John from France joined our group for a spell.

The rain had eased by now and we enjoyed the final section of this year's tramp in fairer weather and in the fine scenery of the chalky cliffs that lead towards Durgle Door and Lulworth Cove. The path was lined with the distinctive white flowers of Nottingham Catchfly.

The sheer cliffs rise to around 150 metres hereabouts. Spectacular scenery even in today's dull weather. Others took a variety of short cuts across The Warren, past a couple of beacons, to gain the excellent footpath to East Chaldon. Meanwhile Sue (pictured above) and I continued as far as we could along the crumbling chalky coastal cliffs, finally turning inland along a permissive path shortly before reaching Bat's Head.

We soon caught up, and Colin, who instigated these SWCP trips in the mid 1990s, turned up to walk with us for the last couple of miles and join the tea party at The Old Bakehouse, where we finished this year's section of the coast path at around 3.45pm. Very enjoyable the tea party was too.

Finely honed plans to return to Weymouth were scuppered by the designated driver having left their keys in Weybridge, but a combination of Colin and the X53 bus came to the rescue, and our trip ended happily with a nice meal washed down with Ringwood Brewery's Best Bitter at The Rock.

Thanks, everyone, for another great trip.

Sent from the M5 on a gloriously sunny morning ... Ho hum!

Sent using BlackBerry® from Orange
Posted by Phreerunner at 10:13 No comments:

Sunday 29 May 2011 - SWCP Day 2 - Sue and Martin's Mini Adventure around The Isle of Portland, from Warwick Court Guest House in Weymouth 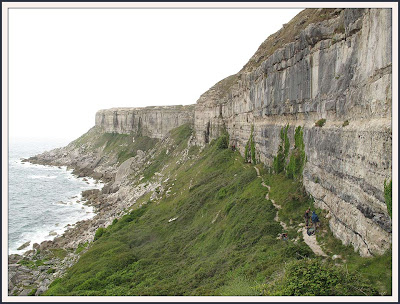 With the rest of the gang having secured lifts to Ferry Bridge, it was left for Sue and me to stroll down from our B+B, Warwick Court Guest House. We left at 9am for the 9.30 rendezvous. It took us an hour. Luckily the others had been delayed by a 'car parking incident', so we were only ten minutes or so behind.

We had strolled past banks of red Valerian and masses of Broomrape, and were within a few yards of catching Andrew, the back marker of our group, when a sudden urgent need propelled us into the excellent Blue Fish Café, where a Sunday breakfast service was in full swing.

We emerged, half an hour later, and bashed on along Anquet's thin blue line on an A4 printed map.

Unfortunately the thin blue line that signified our intended path. was only partially supported by a red dotted line. A 'Coast Path' sign was missed. It would have drawn us up to a broad cliff top path. Instead we headed to the end of a thin path and onto a boulder field just above the high tide mark. This lasted for around 3km and took us two hours. Perhaps we should have turned back, especially where the cliff face forced us below the tide line at a time when the tide was marching up to greet us. Some quick dashes across rocks laden with lettuce wrack were required in order to dodge a dousing.

On and on it went. Over huge rocks laden with fossils - ammonites as thick as your arm, and vast quantities of shells.

Eventually we caught sight of people ahead of us. Were they the rest of our party? Surely not! We waved to them. They waved back. They couldn't be our party, though - as they drew closer it became apparent that they were wearing helmets and carrying ropes. It was reassuring to meet them in an area of huge boulders and landslips. They passed on advice about the route ahead. It would 'go' - just about.

So we continued on over massive boulders, across landslips and slimy rocks, and up precipitous slopes of grass, shale and brambles with long thorns, eventually reaching a small group of climbers perched precariously below an upper band of cliffs.

Continuing on along a thin path below these cliffs, we scrambled our way into a position from which it was possible to escape onto the broad cliff top coast path. On the way a twenty foot down climb nearly had me calling for assistance by way of a top rope, but somehow Sue managed to coax me down at the second attempt.

Today's picture is taken looking back to this whole area of our 'Mini Adventure'. I'd spent Thursday night listening to various TGO Challengers relating such adventures over the past couple of weeks without being able to reciprocate, so having finally reached safety I was delighted to have this story to tell!

Having emerged onto the correct route near Southwell, it was an easy stroll to the fleshpots of Portland Bill, where we sheltered on a rock behind a shed to enjoy a late lunch after an encounter with Alfie the dog.

The thrift strewn coast path up the east side of the Isle was interesting. After passing through an area of fishermen and holiday shacks, it went past a couple of quarries and areas laden with huge blocks of Portland Stone.

Beyond a ruined church, signs routed us up to a field of white coated bowls players. Actually they were dressed all in white, with white down jackets billowing in the wind. Past the Alcatraz grey of an extensive and austere Young Offenders Institute, from where the familiar sound of an old Pink Floyd classic (concerning education) wafted inappropriately.

We tried to follow the path. We failed. Our excuse is the sign we think we misread was concealed by a group of girly jockeys.

After extricating ourselves from an unwelcome and off-route quarry we continued on to boringly regain our chosen path, admire extensive views of Chesil Beach, and eventually return to our morning route near the coffee shop.

Trudging back across the blowy causeway, I observed that today's wind was as brisk as any I had encountered on my low level sections of this year's TGO Challenge. The relative calm of the Rodwell Trail along a disused railway line was very welcome. It took us nearly all the way to Warwick Court, where we arrived at 5.30pm, not too far behind the rest of the group that we had failed to accompany all day.

An evening with a BBQ at The Old Bakehouse, a holiday cottage in Winfrith Newburgh that had been rented for the week by Sue and David, proved most enjoyable. On the way we passed the scene of the afore-mentioned 'parking incident' where Gaynor's car was still suspended on a rock intended to discourage people from parking on a grassy verge!

Alan R, you should realise by now that any let up in transmissions will be spotted by Dot, who requires daily trip updates! (I know you're only envious!)

Sent using BlackBerry® from Orange
Posted by Phreerunner at 08:09 No comments: