I can hear you now.

Well, you must admit, it has 'greened up' a little since our last visit.

And swathes of meadow buttercups have sprouted as well. 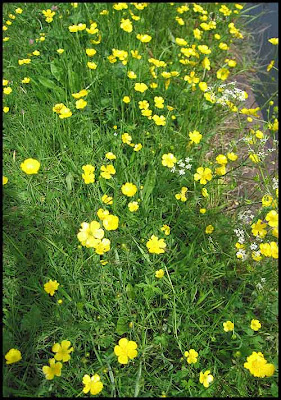 But the ginnel through which I enter the towpath has high nettles that seem to have grown as voraciously as our lawn during our absence on the TGO Challenge.

And it is gratifying to learn that the blog I wrote during the Challenge seems to have been appreciated. I finished editing it this morning and stuck an appropriate message on the TGO Message Board.

This blog usually has about 30 visitors a day. Today there were 868 page loads!!

Anyway, we are off on a different sort of backpacking trip in the Lake District tomorrow. I have heard that I'll have problems with Orange reception.

But what's new? I'll try to entertain, or at least broadcast where we are and how we get on. The plans are set out in detail here.

Feel free to join us for a spell - we should be easy to spot!

Goodnight.
Posted by Phreerunner at 01:07 No comments: 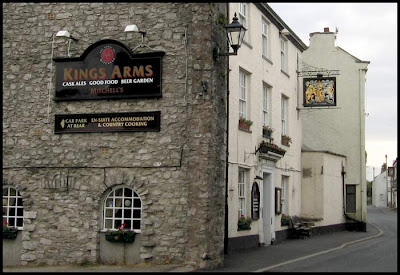 Time for another evening walk. Don joined Sue and I on a dull evening on which we rendezvoused in the Kings Arms at Burton-in-Kendal. Sadly Sarah and Loz, who apparently live next door, received my reminder shortly after we had set off, and Two Yards of Lard must have been busy marking his maths books. Any of those people would have probably transformed the wisely advertised 'blunder' into a proper walk, given their local knowledge.

Anyway, after the obligatory glass of ale we set off along a nice path and soon found a viewpoint with a plaque describing 'The Burton Jubilee Panorama'. This pointed out numerous points of interest, near and far, including the M6! It was a little murky tonight; normally from here one would view the unmistakable outline of the Langdale Pikes. 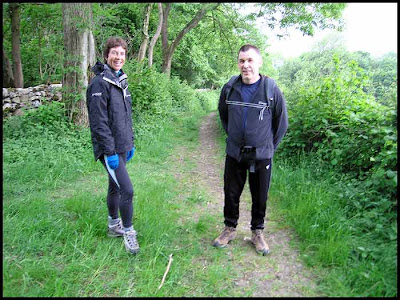 A leaflet from the 'web', funded by English Nature, showed a path to the summit of Hutton Roof Crags. We tried to follow it. Really, we did! 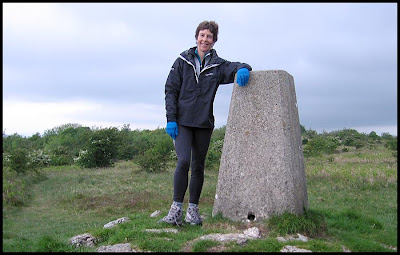 After congratulating ourselves on reaching the high point of the walk - the 274 metre south west summit, we had a choice of at least five paths off the summit (having arrived from none of them).
Avoiding the obvious, well worn, route we tramped off on a compass bearing that tied in with English Nature's fictitious path. Well, to be fair, it started as a path. The Nature was nice, with roe deer on the hoof, and orchids and tormentil in abundance, as well as this striking Birdsfoot Trefoil. 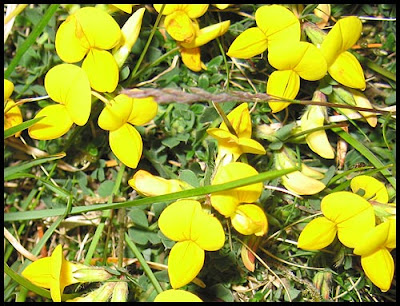 But the path soon disappeared and we continued our blunder for some time before reaching a wall as darkness approached. An owl hooted from a nearby wood. Suddenly the evening dullness gave way to a purplish sunset before the light finally faded. 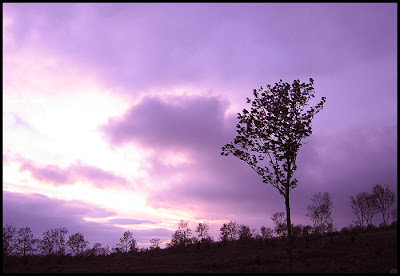 Luckily we now discovered the correct path, and we were able to continue. Still blundering in the dim light, but at least we were on a path, with no more walls to climb, gorse to penetrate, or nettles to sting us.
Walking through a field of uninterested cows, we suddenly heard the thunder of hooves behind us. It was somewhat alarming to turn around to see a runner with a dog heading straight for us followed by the now galloping herd.
Then the gate wouldn't open.
We all quickly remembered how to vault a gate and applied the knowledge instantly. The dog, which behaved impeccably throughout, panicked briefly before jumping for its life.
Phew!

It says 'Crow Trees' on the map. It was Cows at that point tonight.
I think we must have wavered slightly from the 8km route shown below. Have a go, it's a nice area to explore - let us know if you find the correct paths! 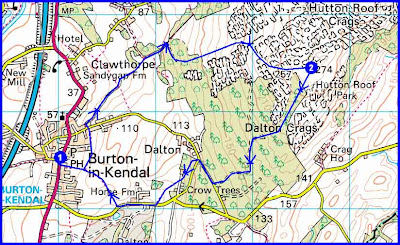 Posted by Phreerunner at 17:43 No comments: 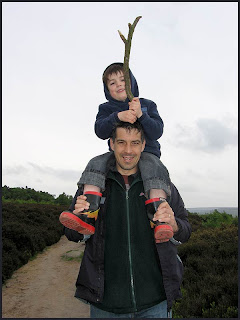 ‘Have you got your down jackets?’

Such was our opening line to Andrew and Kate when they turned up with their mum and dad soon after 5 o’clock at Barn Farm on a shivery Friday evening.

Sue and I had chosen the far corner of the camp site in an effort (successful) to distance ourselves from any rowdy elements (none detected) on this Bank Holiday weekend.

For the first time in two weeks of camping we had put our own tent up in the rain, but now the flimsy Nallo used in Scotland had been replaced with the altogether more robust Hyperspace tent. The ground was however more slopey than any of our pitches in Scotland!
The wind also became stronger than at any time in Scotland over the past two weeks, including the Munro summits.

The big tent was soon up and Alistair was eventually installed inside with the cooker and large piles of meatballs and pasta.

A delay had arisen due to my failure to pack a large frying pan and camp chairs, so we had to wait for delivery of those items – borrowed from Sue and Phil who live nearby. They’d responded to our SOS very efficiently and even brought some crisps – with wine to wash them down, duly consumed before the children got hungry. 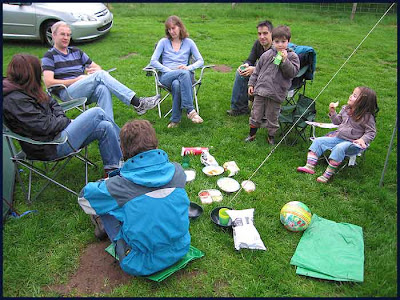 After a good sleep in the strangely spacious tent we woke to the chatter of children, later than normal.

My sole role on this trip was to prepare the morning tea/coffee (both Al and Hazel prefer coffee).

We had forgotten the coffee!

So I didn’t really have to do much other than make tea and eat Al’s fine fried breakfast, courtesy of the borrowed frying pan, which is much better than ours.

The breakfast was reminiscent of Val’s fine offering at Cougie, now just a distant memory.

Then, as is traditional, we went for a walk.

Not the 20km or so to which our finely tuned bodies have become accustomed.

About 3km for the entire morning.

In doing this we re-enacted childhood activities of climbing rocks (known as ‘pineapples’ to some) and lurking in trees. We tried hide and seek, but couldn’t lose anyone. 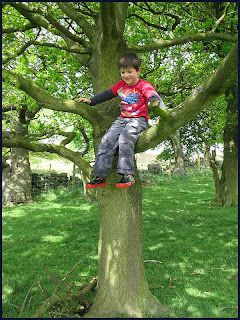 Such are the current activities played out on Stanton Moor, to which a path leads from our corner of the camp site. It’s around 4000 years since people first settled here in the Bronze Age. An information board told us that since that time the Moor has been used as a site for funerals, ceremonies, farming, quarrying and recreation.
A nearby orange mound of earth clearly pinpointed the ugly remnants of the quarry that was used for many years to produce millstones for export all over the world and is currently the subject of angst amongst the locals.

The Moor hung onto its larch trees until World War 1, when the First Canadian Army Womens Forestry Corps felled them to provide wood for trenches in France.
(You never know, that information may win you £1 million one day!)

More interestingly, we were supposed to be able to find tiger beetles, tree pipits and woodcock, and much more. We just saw meadow pipits. Or were they skylarks? 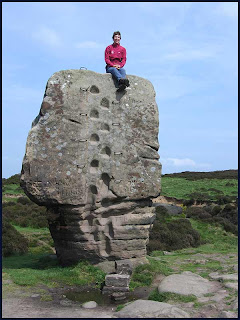 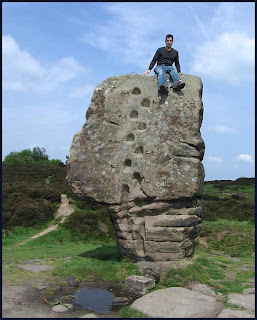 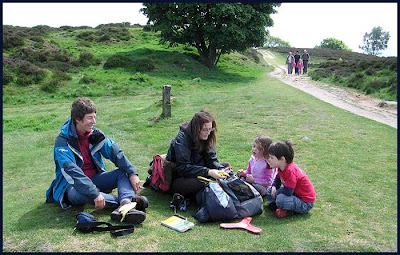 After a long time in a tree and up the 5 metre high sandstone rock shown above known as the Cork Stone – handily equipped with a Via Ferrata to aid its ascent, we finally reached the highlight of our route, and our turning point – the Nine Ladies Stone Circle. Constructed at least 4000 years ago, with at least 10 stones, this was a place for ceremonies, some everyday, some perhaps more special, concerned with fertility and the seasons. The information board says ‘Dances may have been involved.’ Who am I to argue, or ask for proof!?

There’s another small stone – 40 metres away – the King Stone. No conjecture for that – ‘purpose unknown’ scribes the bored sign writer, though if you search the 'net' there is of course a legend to be unearthed.... 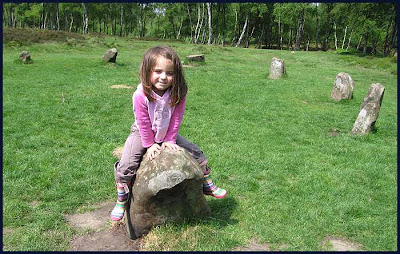 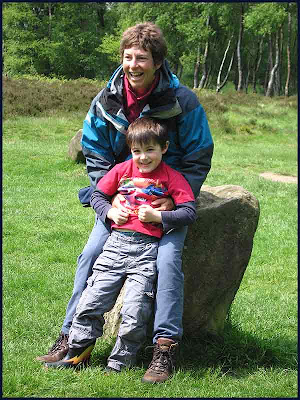 It seems there are many Bronze Age monuments up here. You just have to open this section of the ‘White Peak’ 1:25000 map to discover that the place is positively littered with them. Apparently many are funereal and ceremonial, but others are domestic and agricultural monuments. The latter seems a bit odd, as the main reason for the survival of these monuments is that the land has not been used for agriculture!

Anyway, after our exhausting 3km walk (yes, it is quite shattering to move so slowly on a cold day!) we finally got back to camp, and some forgetmenots. 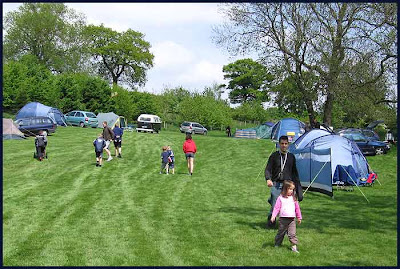 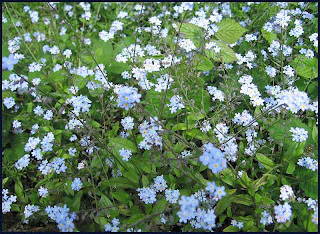 Decisions. The Red Lion, or The Druids?

The tables outside the Red Lion were full, so we lunched on luxury sandwiches and welcome beer (don’t get me wrong, Kate and Andrew had milk) in a sheltered spot in the sun outside The Druids.

On the road outside lurks a modern monument – grandly named The Birchover Millennium Stone. This piece of rock has had a circular core removed to exemplify the former local industry of millstone production.
It provided a fairly risk free play-thing. 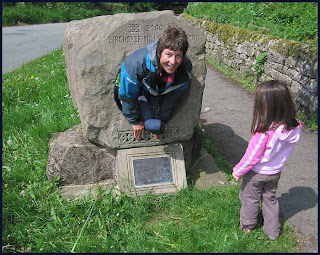 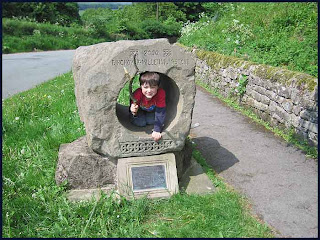 Before we knew it, Al was back at his station producing sausage and bashed potato (we had no masher). The afternoon had flown past, I think perhaps I’d fainted for a while!

Here's the view from our tent, on the sunlit evening - looking down towards Matlock. 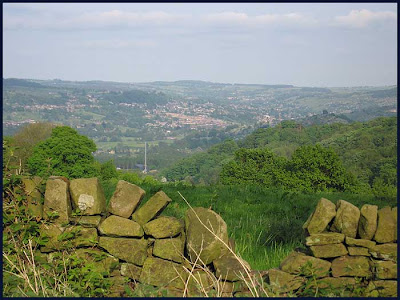 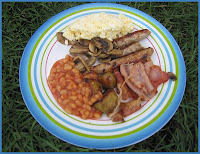 Sunday was largely a repeat of Saturday, with another fine breakfast, some different rocks to climb and a different loopy route to the Nine Ladies and back. 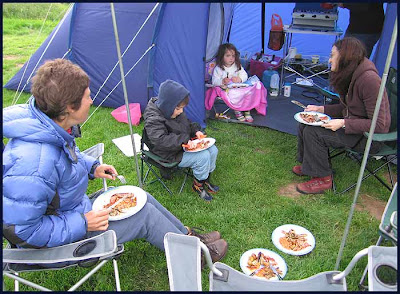 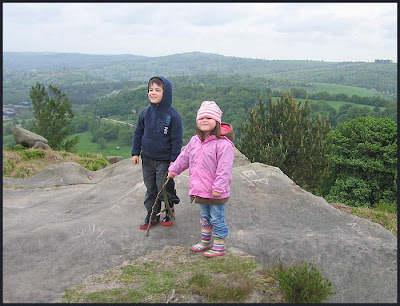 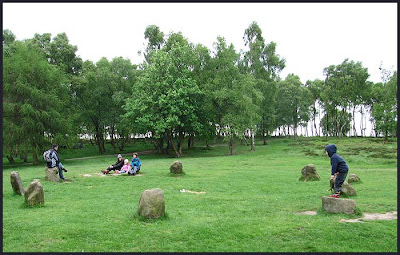 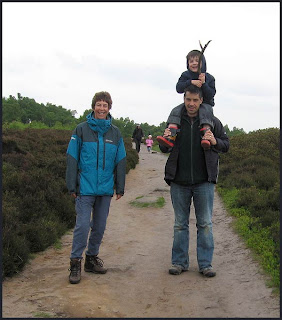 The chairs and pan were duly returned, and we all returned home for a rest…
Posted by Phreerunner at 09:59 1 comment: