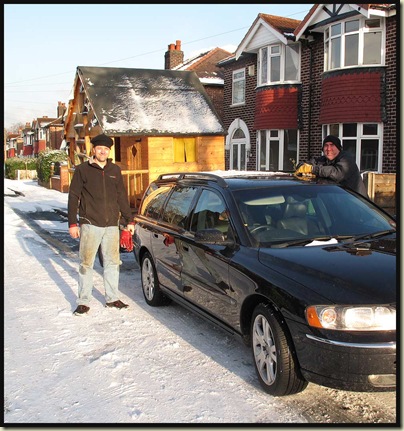 Our friendly neighbours, Barney and Carmen, have moved house. 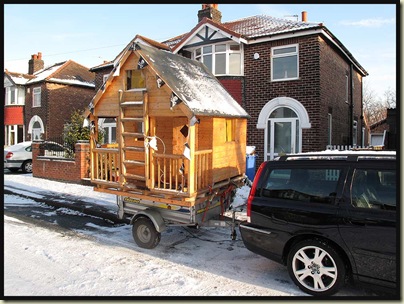 They took it with them! 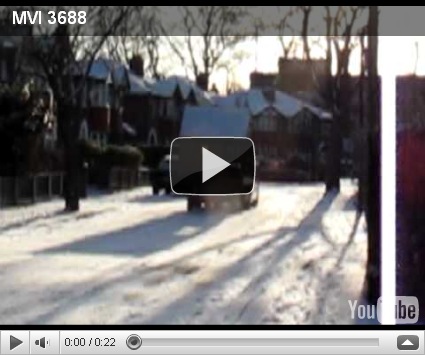 Good luck in your new home, Barney, Carmen, C and A.  We’ll be round with the shortbread soon. 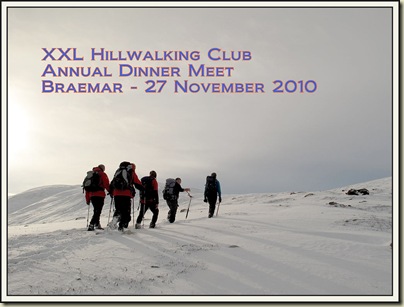 This entry is by way of a reprise of the past few days’ activities.

A slideshow is here.

Click on each Day heading for the posting for that day.

320 miles from Timperley to Braemar in 7 hours, via Tebay (pictured below) and Stirling.  A very easy journey in lovely sunny weather, despite warnings of snow.

The A93 road over the Devil’s Elbow to Glenshee had a bit of snow on it, and Braemar had a fair amount – the edge of the bad weather must be around here (for the time being).

I enjoyed an evening at the Fife Arms with 20-30 XXLers and also with TGO Challengers Doug Bruce and Richard Baker. 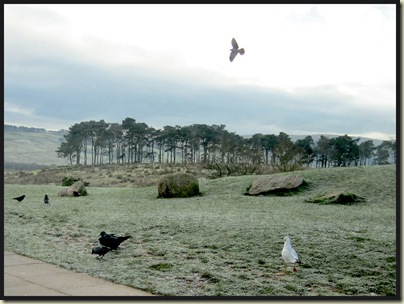 Given that driving anywhere from Braemar was inadvisable (if not impossible) after further snow, various easy walks from Braemar were planned.  Given the distance I’d travelled I chose the longest outing available, a trip up the Corbett, Creag nan Gabhar (834 metres) which I last went up on 4 January 2005.

Eight of us walked past the golf course, to a photo call on the A93 at Auchallater. 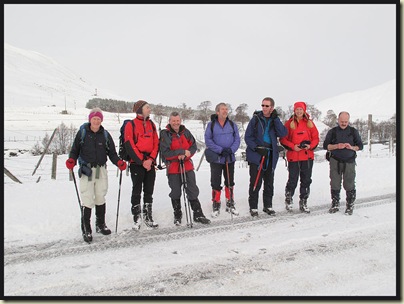 Through deepening snow, we rose above Glen Callater before pausing for elevenses. 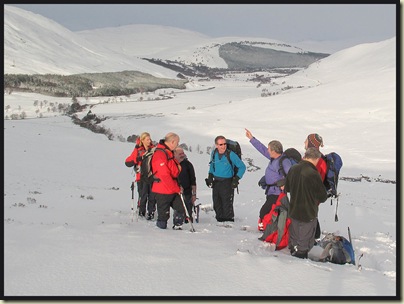 Paul (as planned) and later Gus (stressed by calls from someone called Jane) peeled off and left the rest of us to slog our way through a sunny snowstorm to the summit of Creag nan Gabhar.

Snow shoes, left in our spare bedroom in Timperley, would have been of benefit at this point, though to be fair the going could have been more difficult. 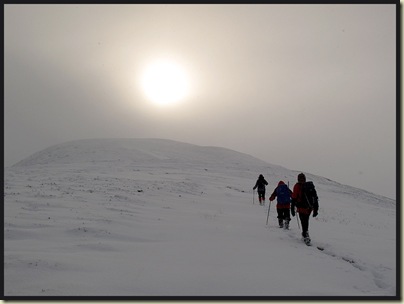 We dallied there for luncheon.  At minus 7C, plus a little wind-chill, it was the coldest point of the day. 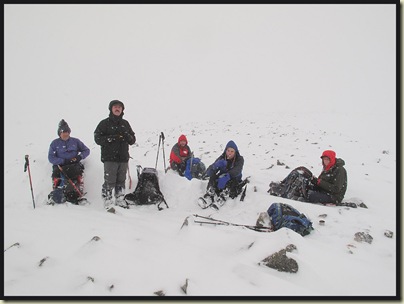 Mark’s hands got cold.  He lost all feeling in them!

We decided to return the same way, and just about managed to follow the upward footprints back to Glen Callater.  The snow storm had eased, and the sun was glimpsed.

There was a lovely sunset. 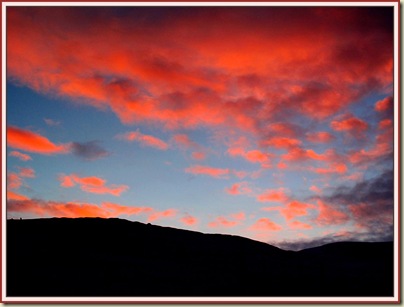 Laden with fresh snow, the trees in Glen Callater looked beautiful in the fading light. 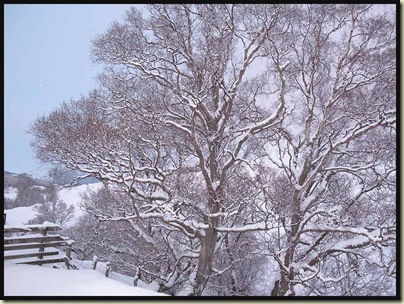 We followed some cross country skiers across the golf course and arrived back at the Fife around 4.30pm.  We had been out for just 6.5 hours on this 18km walk with 650 metres ascent. 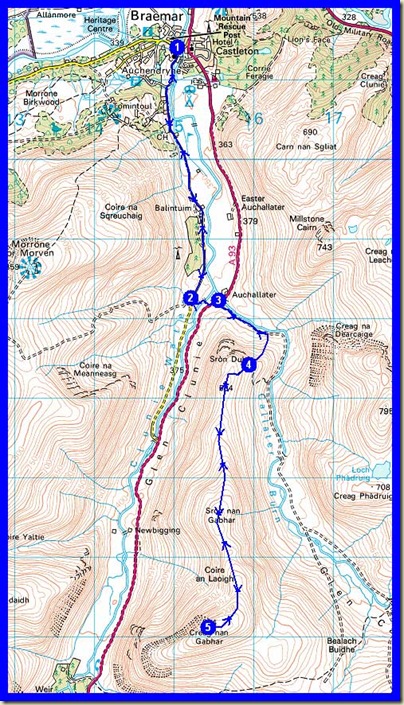 The annual dinner was great fun.  The Mistress of Ceremonies (below) was in excellent form, as were several other speakers, who were followed by a slideshow from the ‘House of Scoular Production Team’, and a raffle in which, bizarrely, the first three tickets drawn were consecutive numbers! 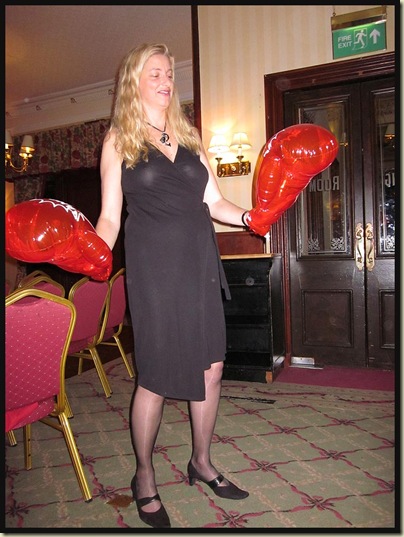 A planned trip to Poolewe having been abandoned, I was to return home today.  But it had snowed again and there was no chance of the A93 to Blairgowrie being opened due to the snow ploughs efforts being concentrated into keeping the route to Aberdeen open. 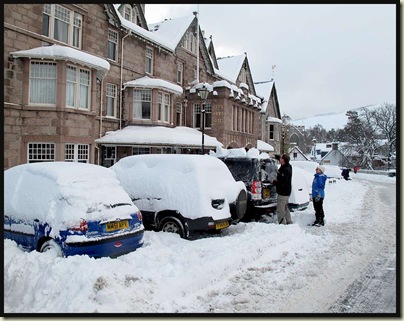 Having escaped from Braemar – thanks go to various people who helped with shoveling, it was much appreciated – the drive to Aberdeen in a snowstorm was slow but enjoyable.  Except when baulked by very slow vehicles – with worn front tyres, my vehicle needed momentum! 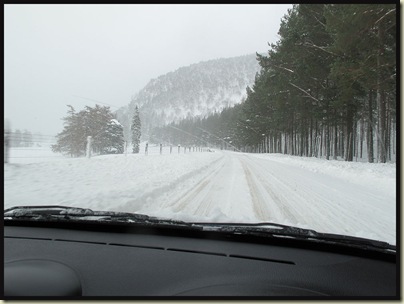 The roads around Aberdeen were fine, but to the south the A90 became gradually more difficult.  Clearly lorries were faltering on the hard packed ice that lay below the top surface that had been slushified by the gritting lorries.

Later, the approach to Dundee (pictured below) became even slower, and the short journey from Dundee to Perth, littered with HGVs that had simply slid off the road, took from 4pm to 10pm.  So no chance of getting home, as I later discovered that all routes south of Perth had been shut since before 2pm. 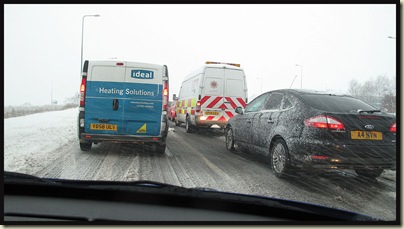 After a warm and cosy night in the car outside Morrisons car park in Perth, during which I was entertained from Brisbane by the English cricketers scoring 517 for 1 wicket, I headed back to a queue on the A93 to join the A9.  After three and a half hours our patience bore fruit.  The A9 reopened for a while, allowing vehicles to make their way slowly south towards Stirling.

We were still travelling slowly enough to take the following photos through the car windows, but after Stirling things speeded up and south of Glasgow there was only a sprinkling of snow.

The whole day’s journey was very scenic, and actually rather enjoyable. 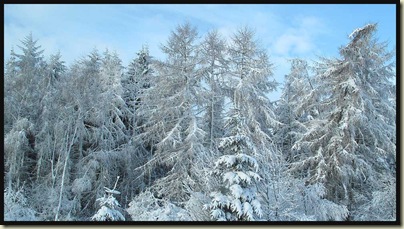 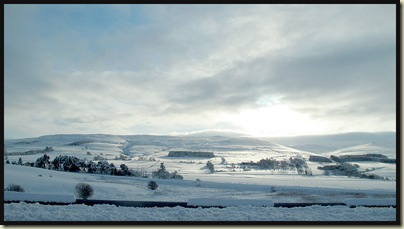 South of Lancaster, there was no snow at all, and the 420 mile journey was finally completed after more than 30 comfortable hours in the car.  But as I write, there is now snow virtually everywhere in the UK, including Timperley.

I’ve been listening to complaints from people caught up in jams even worse than the ones that I encountered.  I have sympathy with their predicament, but not with their complaints.  It doesn’t take a genius to work out that roads clogged by skidding lorries on thick ice are going to be blocked for some time in this weather.  Comparison with situations in other countries that often encounter such conditions is also ‘false’, as drivers in such places almost certainly use winter tyres, which make a vast difference, as those members of the XXL Club who have them will no doubt confirm.  It’s not rocket science to suggest that packing provisions and clothing, etc (including a shovel), sufficient to spend at least one night in a vehicle, should be a prerequisite of virtually any journey in these conditions.

If you missed it above, a slideshow is here.  I enjoyed this trip, despite the disproportionate amount of time spent in the car.  The unpredictability of such a mini adventure is always rather exciting… 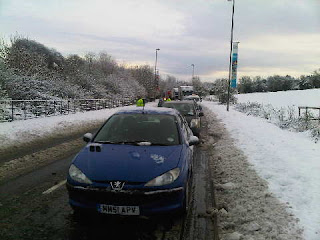 Stuck in a Morrisons car park with only a Test Match for company....

Bored with that, a bit of action with the ice axe and some feverish manoeuvring saw me escape from the clutches of the car park before 7 am (Morrisons didn't open until 8, so I never did discover their coffee shop) to reclaim my position in the car park on the A93 that leads to the closed A9.

Enquiries led me to conclude that there was no sensible alternative to waiting here. If Louise had her way I'd be waiting till spring! I was joined by numerous other vehicles that I recognised from yesterday's first gear adventure between Dundee and Perth.

Apparently traffic had been directed to a 'Rest Centre' (a school) where some 600 people spent the night. The police at the A9 closure point last night didn't tell me that - perhaps it was full, like all the hotels.

I attempted to gain information as to how to escape from Perth by emailing PerthFM. An immediate reply (!) said 'All roads closed. Keep warm'.

By 10am I'd been refreshed by coffee kindly supplied by Tom, whose fiancée Jennifer stayed in their car whilst he fetched provisions from some nearby services. I could have gone with him; nothing moved. Brownies were the currency - Tom refused cash in recognition of all those who had pushed their car along the A90 ice rink yesterday (I may have been one of those people). Tom and Jennifer had managed to find friends in Perth to stay with last night, after establishing that all hotel rooms had been taken by mid afternoon (it seems the roads south had been closed nearly all day).

The blizzard had stopped overnight, to be replaced by cold sunshine this morning.

10.30am: after three and a half hours in the queue (pictured) PerthFM reports 'minor roads blocked by fallen trees, major routes shut - you are going to struggle to get out of Perth today'. That's hopeful then!

10,31am: Traffic starts to move. The A9 has reopened. It's gentle, single file stuff down to Glasgow, but after that the M74 and M6 are clear, with just a sprinkling of snow in evidence as far as Lancaster and none after that.

So the journey, a bit less epic today, ended in Timperley at around 5pm after over 30 hours in the car. 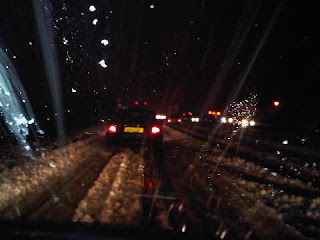 I knew it wouldn't be easy to get home, but going to Poolewe may have been easier than this.

Thanks go to the XXL Club for a great evening, followed by enthusiastic shoveling that facilitated my escape from Braemar by 10.45am.

The Glenshee road was closed, so a route via Aberdeen was chosen. Aberdeen was Relatively (and I use that word advisedly) free of snow. I was there by 1pm.

Another three hours got me to Dundee. It was stop/start, mainly the former, during one of which today's picture was taken.

Plans of going up Lendrick Hill today, to break the journey to Manchester, proved mildly optimistic.

The journey from Dundee to Perth was blighted by rather poor road conditions and a rash of skidding lorries. It took six hours. Not bad for a journey of little more than 20 miles!

There's no way of getting south of Perth just now (10.30pm on Sunday evening), and with snowdrifts everywhere, finding somewhere safe to park was tricky.

I finally pulled into a Morrisons car park and promptly got stuck. I may be here for some time. Any readers in Perth are welcome to visit me in the campervan disguised as a Peugeot 206.

Ho ho, what fun - I hope Morrisons has a coffee shop!

Sent using BlackBerry® from Orange
Posted by Phreerunner at 22:51 6 comments: