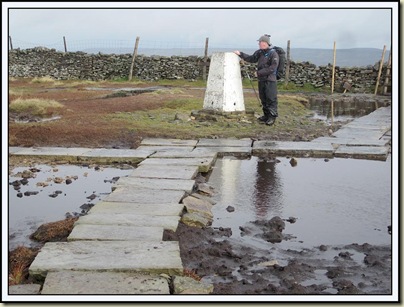 It seems no time at all since the last Ramsoc weekend, on which I reported here.

This year was Sue W’s tenth in charge.  She tried to find a successor.  She failed.  So will we have to endure ten more years of Sue’s weather?

Despite the two smiling Sues below, it was, as usual on this event, raining as we set off from Kettlewell Youth Hostel, which also masquerades as a Post Office, shortly before ten o’clock on Saturday morning. 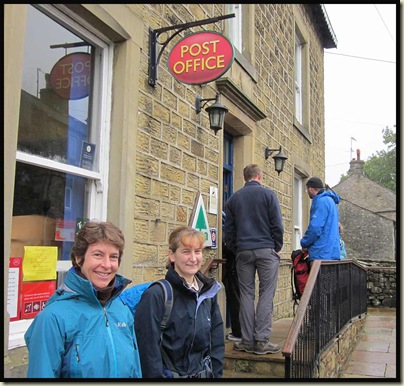 Thirty nine people attended.  But just five of us headed towards Great Whernside.  It was very autumny, and Sue W was noticeably out of step, preoccupied by weightier matters, her dad being subject to ‘bit removal’ and Phil being en route to exile in a distant land. 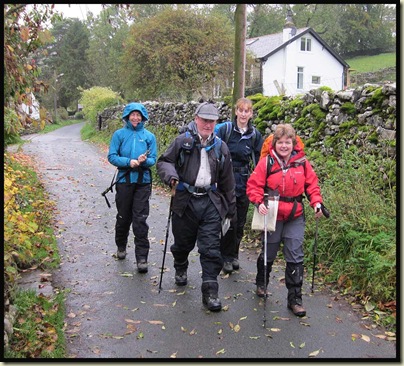 Whilst others (‘The Buckden Pike Faction’) headed straight up Buckden Pike, the five of us tramped up Dowber Gill Beck, past a series of waterfalls (were these man-made?) into the mist. 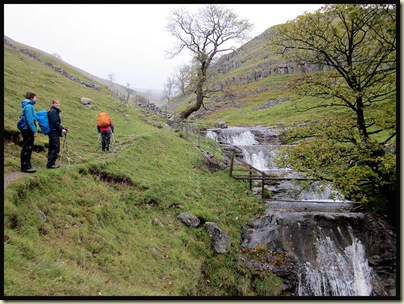 After an elevenses break and lots of pauses to wait for Worzel, who, exhausted from rising early and rummaging through his massive wardrobe (stashed considerately in individual crisp packets), struggled to move more quickly than his pet tortoise, Gummidge.

Here, the two Sues and Julie wait for Worzel atop Great Whernside. 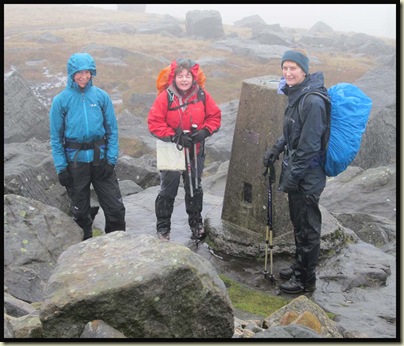 The mizzle that had accompanied us up the hill now fully recognised Sue W and proceeded to try to wash her away.  She’s made of stronger stuff though, and led us down to the well named ‘Little Hunters Sleets’ before heading on up to a misty wall that leads to the summit of Buckden Pike.

After a while, a gap in the wall led to a sheltered corner that was ideal for lunch.  The option to return to Kettlewell directly from here was surprisingly rejected. 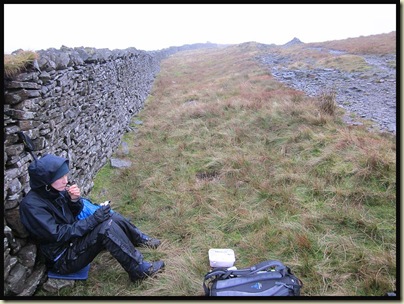 Instead, we splashed through a bog, past the memorial to the Polish airmen who perished here in 1942, to the summit of Buckden Pike.

To our amazement, it was sunny.  Sue elected to dive in despite forgetting her snorkel. 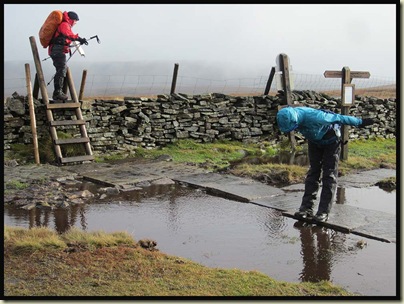 It wasn’t far back to the lunch spot, but it took a while. 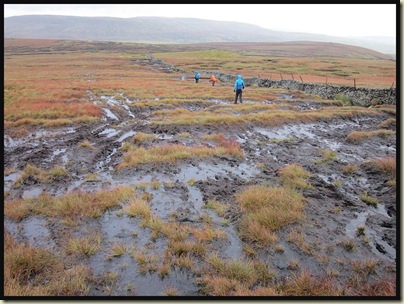 Amazingly, we all (even Worzel, who was too far behind to make the pictures) retained dry feet all day, thanks to good boots and effective gaiters. 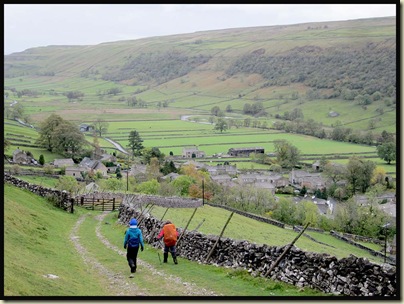 Approaching Starbotton, a splinter group was set upon visiting the Fox and Hounds.  We walked past it.  It was shut.  The Buckden Pike Faction had already been there, demanding tea and coffee on this cold wet day, to the despair of the grumpy ”I sell beer, not soft drinks” landlord who had promptly shut up shop.

It was definitely a ‘hot chocolate day’, so after a stroll along the Dales Way to Kettlewell, passing the Blue Bell Inn and the Racehorses Hotel, we returned to tea, cake and hot showers at the youth hostel. 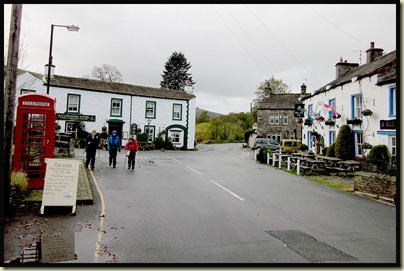 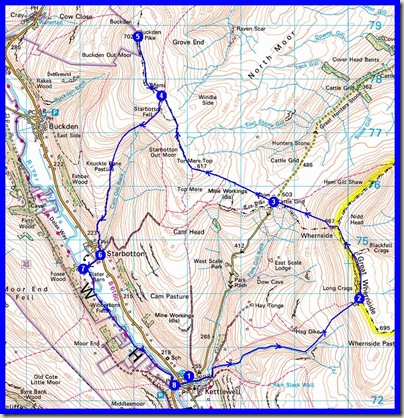 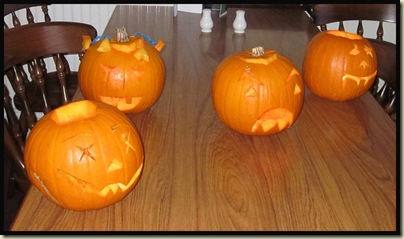 It dawned clear.  Even frosty.  Sue W’s grip on the weather had obviously relaxed.

Several folk went home, or to work.  Workaholics.  This is a ‘mixed group’, varying from scarecrow impersonators to flash business types.  Many of them were at university together, where they enjoyed walking and other activities between studious interludes.

Nearly all those remaining – some 20 to 30 souls – drove to Buckden to enjoy a stroll to Cray, up the pleasantly graded Buckden Rake. 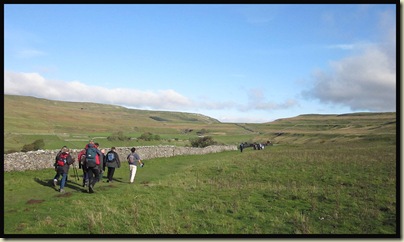 It was a grand morning (what was left of it), and we laboured slowly up to near this tree, overlooking Cray. 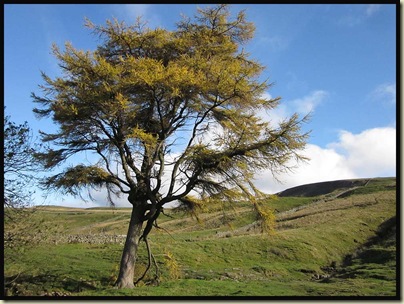 A short, slippery descent and a few stepping stones led to The White Lion, a fine establishment.  We lingered outside, sustained by tea, shortbread and brownies. 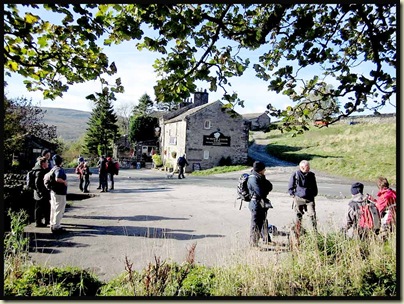 Despite teenage clamours for lunch, we managed to continue to Hubberholme, where a shingle beach beside the River Wharfe finally provided the desired respite and a reunion with Julia and Anna, who had earlier absconded to Grassington, which is apparently under siege from TV crews filming a ‘Reality TV Show’ in which the winner will receive a £300,000 cottage.

Our resident scarecrow couldn’t resist a visit to The George, where the surly treatment echoed yesterday’s poor experience in Starbotton.  The remaining 20+ potential customers were thus lost to this establishment.  We walked past the pub. 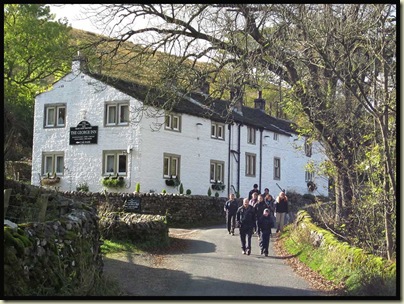 Passing an attractive B&B (see slideshow), we continued through fields along the Dales Way to Buckden.  It was a lovely afternoon.  Here eleven of us admire the view from the bridge over the Wharfe at Buckden. 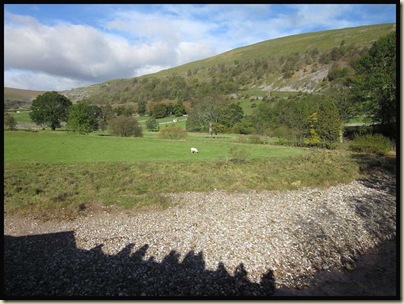 The sun beat down on this last lap of our enjoyable weekend, where 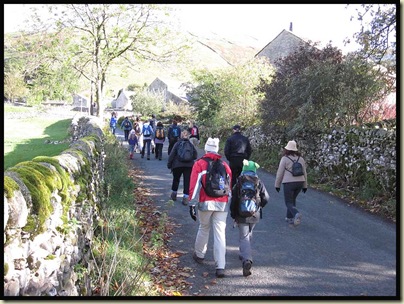 the Buck Inn, once a fine establishment, exhibited more signs of the ‘surly landlord’ malaise that seems to be affecting this valley. 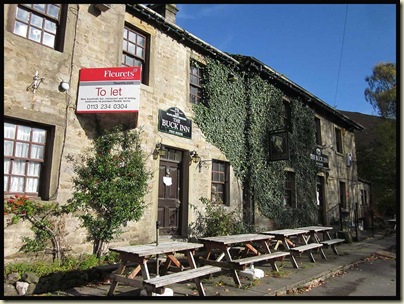 The tea shop behind the vacant pub was fairly full.  We’d have had to share a table.  Nobody showed any interest in our potential custom.  Did we look like scarecrows?

We all went home. 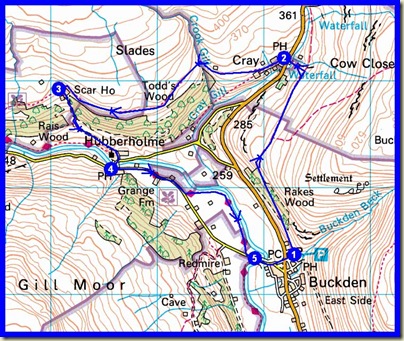 And here’s a slideshow – 50 images in total.