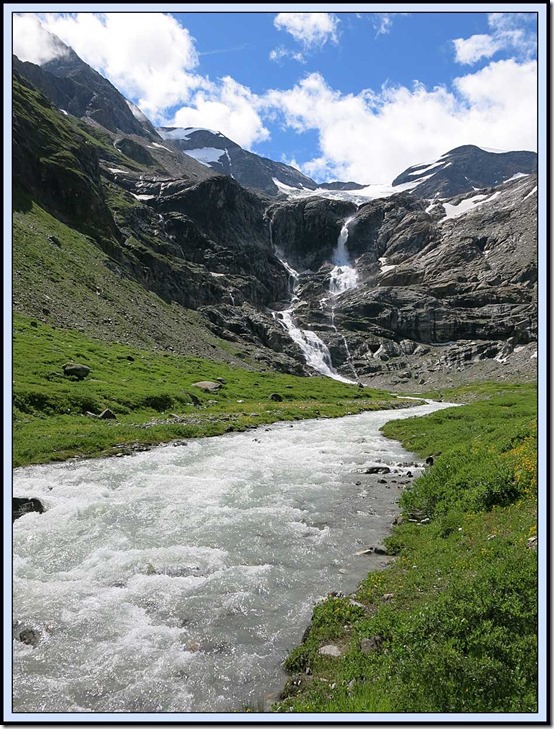 Having successfully completed a 100 page photobook for our Valmalenco trip in 2015, I’ve now embarked on designing a book for our Austrian trip last year.

Allan Hartley’s Cicerone guide simply says ‘Pick up route 716 … cross the footbridge … start to climb, and he describes the third day of the Gross Glockner route as an ‘anti-climax’. This is not the first time I’ve disagreed with him.

The picture tells the story…?

My long awaited hernia op took place this afternoon. I’m sore but back at home and able to do this, so the Austria photobook is in good hands. Hopefully there will be a bargain offer sometime for the purpose of getting it printed. Then there are two big projects – South America 2015 and Canada 2017. But another Alpine trip will intervene before we can finish those, I suspect.

Wednesday 6 June 2018 – Another Stroll Around Timperley 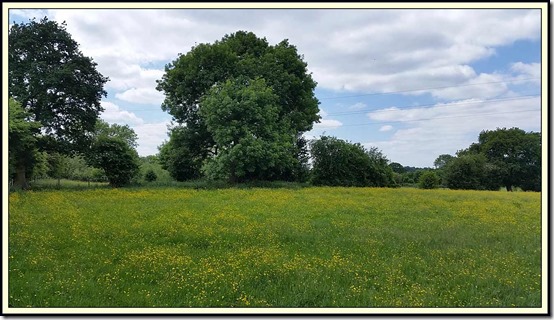 What a contrast to my walk over the same ground on 21 December 2017!

Instead of December’s deep mud we were hampered only by stinging nettles and hard, lumpy ground.

A call to JJ suggesting a walk tomorrow drew a blank. It had to be today. So again at very short notice we set off on another lovely day, but not too hot for an enjoyable short walk. We may even have found a path that JJ hadn’t walked before. Just a small one.

Here he is examining a gatepost from where the header picture was taken. It must once upon a time have supported a substantial gate. I find it hard to picture that scene, given the current view of a buttercup meadow. 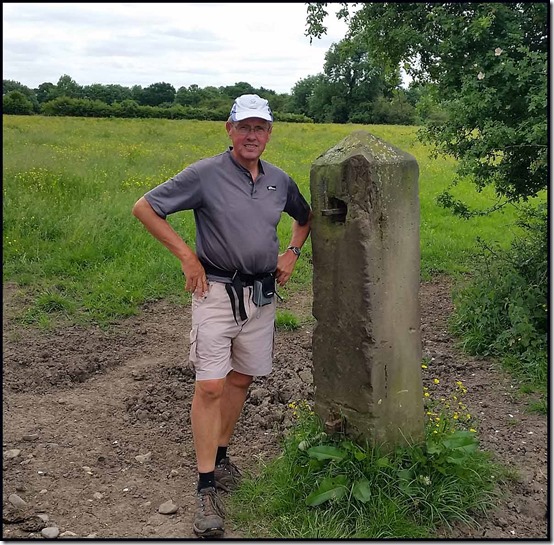 The lumpy ground was due to cattle and horses tramping in the mud that has now magically vanished. The horses look a little happier in their temporarily mud free environment. 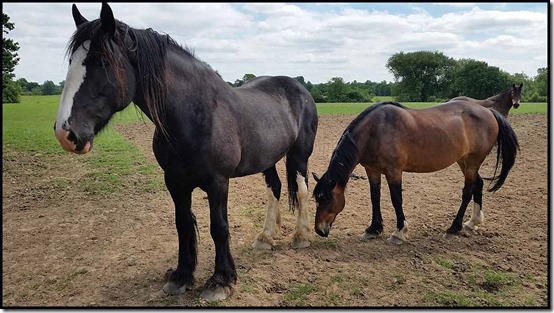 After quite a long time in the open, we returned to the ginnels of Altrincham, before heading past JJ’s children’s old school and across the busy golf course. 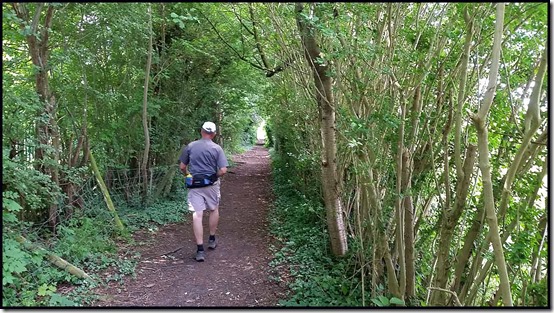 King George V Pool is situated in a secluded spot by Timperley Brook. A haven for wildlife. 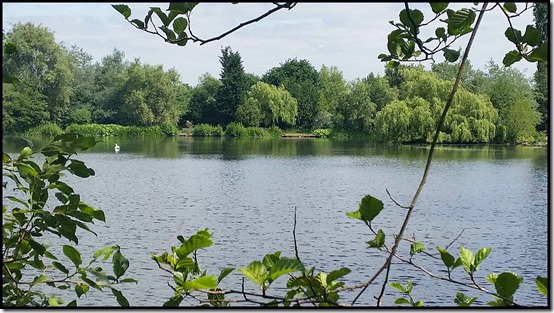 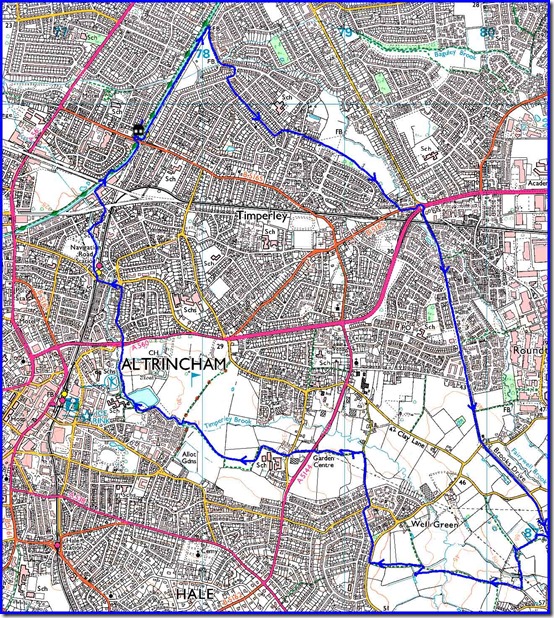 A very satisfying little jaunt. Thanks for the company, JJ.

The first of Andrew’s ‘Deepest Cheshire’ walks brought a series of apologies for absence, leaving just four of us to enjoy this lovely summer’s evening in the Cheshire countryside.

The walk started with an intimidating public footpath through property owned by the wealthy founders of Boohoo.com, who see fit to place Alsatians and other vicious looking species of dog either side of the footpath, albeit behind high fences. This is wholly unacceptable and we hope that whoever has recently strimmed the pathway (I’m sure the Boohoo people would want it to be overgrown and disused) is ‘on the case’.

Anyway, we probably won’t be there again for a while, so why get worked up about nasty rich people. After negotiating a recently fallen tree we continued over Marthall Brook to field paths – at this point easy walking over compacted soil. 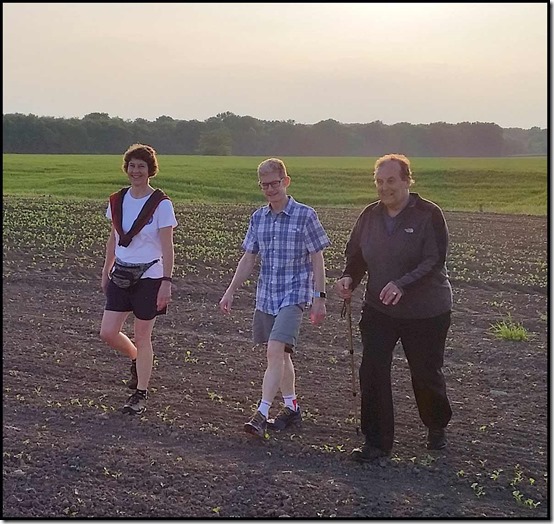 Jenny had chosen to stay away today. Possibly just as well, as her fear of animals may have resulted in mild panic as a field of young bullocks raced over to investigate. 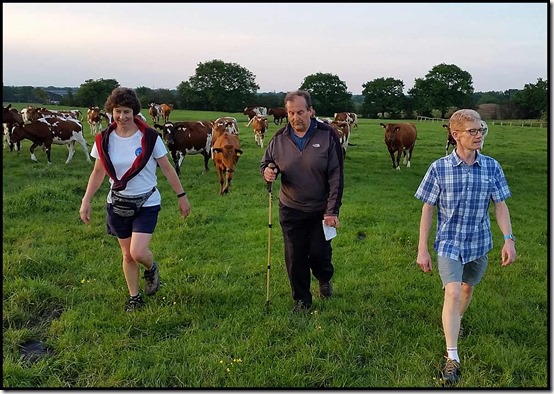 Their curiosity was not matched by any form of bravery, so these tasty beasts were not really troublesome.

The ongoing path – which heads directly towards the white house on the left, was less than distinct. 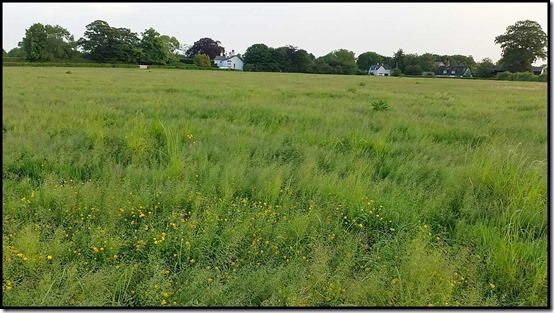 After turning right past friendly dogs at Ollerton Hall, we entered a field of attentive sheep and horses. Their friendly nature indicated that they may be pets. 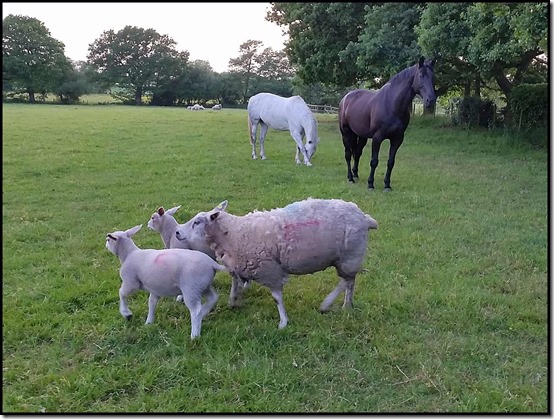 Shadows were lengthening as we took an indistinct but well signposted path through a field of buttercups. 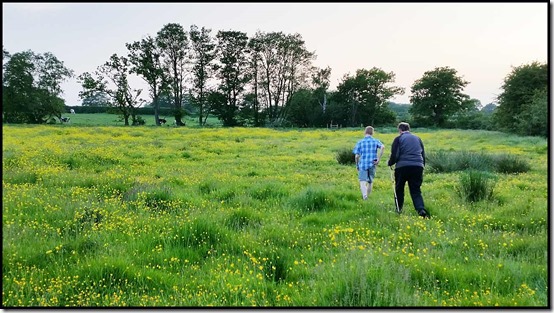 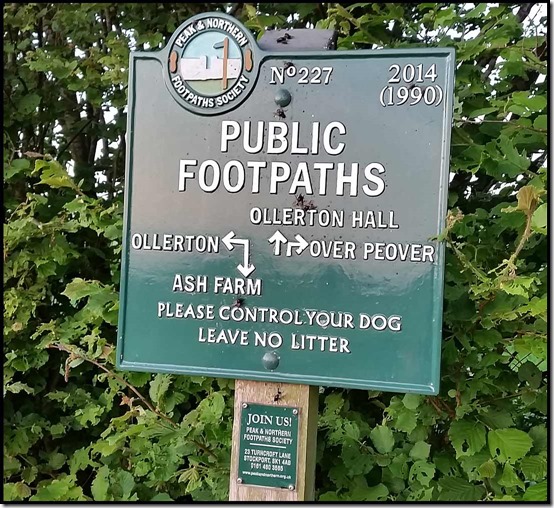 After passing through Ash Farm and dodging the traffic on Seven Sisters Lane, Andrew led us through Windmill Wood, where even the current spell of dry weather had failed to eliminate the last remnants of mud, and the remains of a huge tree lay splayed across the path. 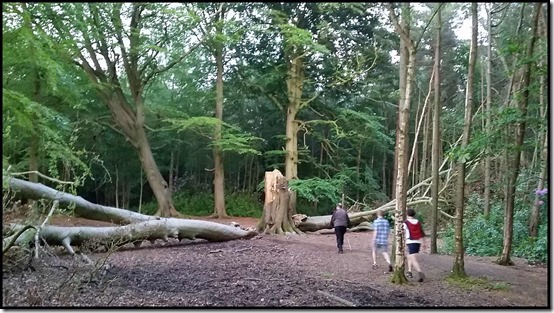 Soon we were back to a friendly welcome at the Dun Cow, where both staff and customers appreciated, and were perhaps a little envious of what we had been up to. 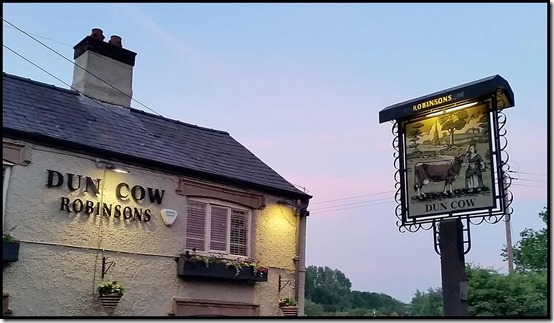 Here’s our route – about 8 km, with about 50 metres ascent, taking a little over 2 hours. 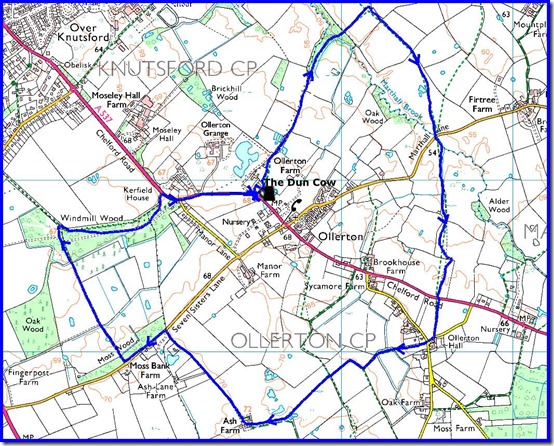 PS Blogger problems:
I noticed yesterday that the system that automatically notifies me by email of comments received on my postings didn’t seem to be working. Searches on the internet for this problem implied that my settings might be wrong, so I checked them out and spent some time trying to resolve the problem, without success.
Why do I continue to waste time on such exercises? It’s always Google’s fault, and so it proves in this case. This morning my searches revealed a thread that has been joined by countless users of Google’s Blogger software with exactly the same problem. It’s not of great concern to me as I don’t receive many comments, but if you have commented and haven’t received a response, or you are a user of Blogger and don’t appear to have received notification of expected comments, Google, who recently ‘retired’ an assortment of functions related to their Blogger product, say they are trying to fix the problem. In the meantime the problem can be circumvented on a posting by posting basis by making a dummy comment after posting your blog, with the ‘Follow-up comments will be sent to (email address)’ box ticked, then deleting the dummy comment.
All rather tedious, and yet another example of Google creating a problem and causing mass wastage of time instead of notifying users of that problem and their attempts to fix it. Shame on them.
(I know it’s a free product. I’d be happy to pay for it if that would result in improvements. I suspect that moving ten years of postings across to Wordpress, the obvious alternative, might give rise to more difficulties than my non-technical brain could cope with. Any offers?)

Posted by Phreerunner at 15:43 No comments:

Wednesday 30 May 2018 – Another Dunham Massey Walk 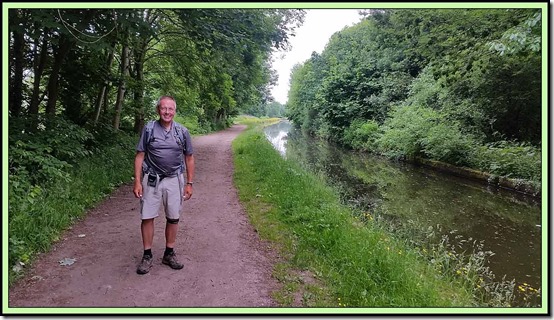 After trekking across Scotland in his lightweight kilt, JJ reverted to more normal garb for this stroll to Altrincham on another warm day.

Waiting at Timperley Bridge, I took this picture of the newly converted Nelson House office block, from where an old adversary of mine, ‘Devious David’ (now in Hale) used to ply his trade. It has been converted to apartments which are now up for sale, with some fine views of the canal, and vice versa. 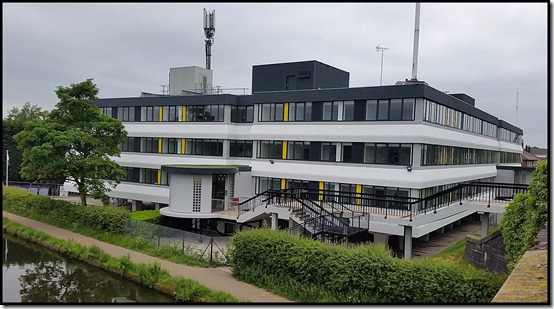 The Canada Geese were being protective of their young. The swans seem not to have any offspring this year. 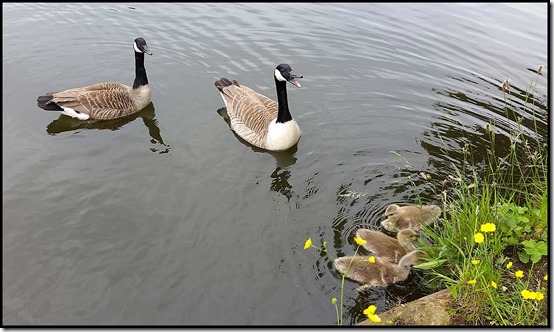 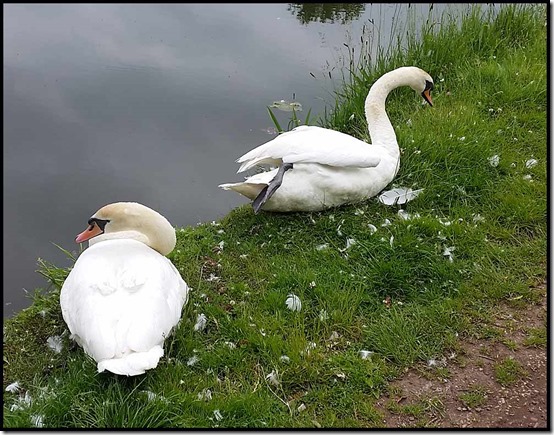 A few holiday barges were enjoying the benign conditions. 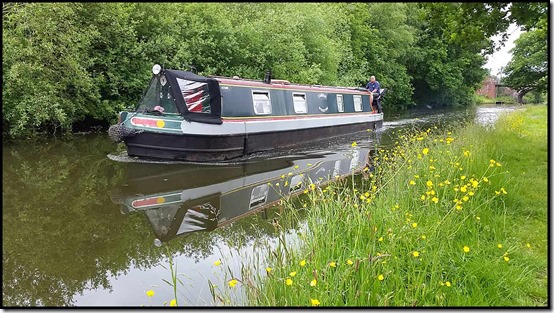 But it was generally very quiet on both the canal and the towpath. Perhaps because we started at 8 am. 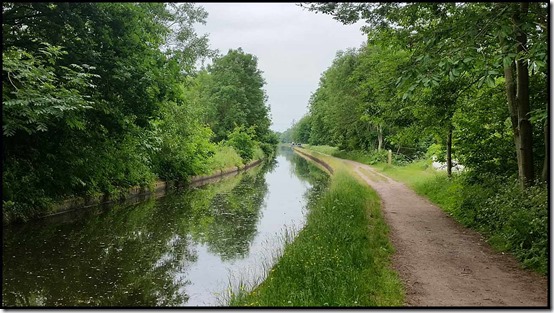 An attempt to source coffee and cake at the Lavender Tea Rooms failed due to our early arrival. We did however enjoy cake and scones at a convenient picnic table, but despite dallying no staff arrived and we continued our stroll across the golf course and into Altrincham.

Several coffee shops evaded us, and we declined to pause at others. Eventually we wandered in to the Market House to satisfy our cravings. This is where one of the characters of Wythenshawe parkrun, Owen, works, thanks to the owners’ willingness to employ staff with special needs. 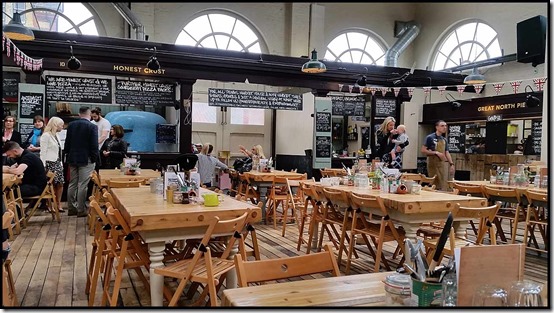 Owen was a little puzzled to see me. I expected him to say “You shouldn’t be here, you should be at the parkrun!”

There’s a very nice piece written about him and another lad called Tom, in ‘Altrincham Today’, here. 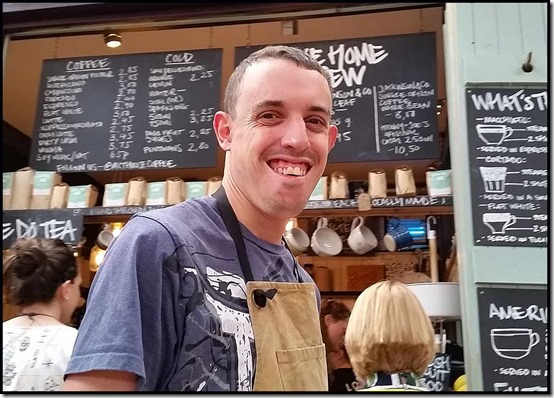 I’ve reported on this route before, but here it is again. It’s a good 10 km, to which a couple of km can be added for peripheral wanderings, that can be covered in anything between an energetic hour (or less, that’s the challenge) if the mood takes you, or the more leisurely three hours we chose to take today. (As usual, click to enlarge the picture.) 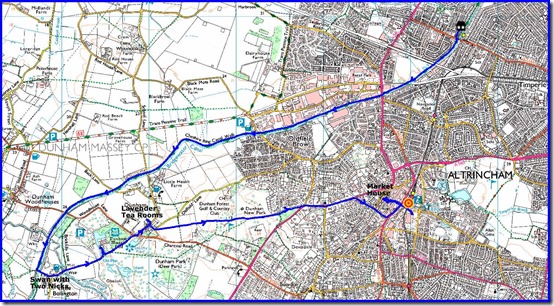 Posted by Phreerunner at 21:04 No comments: