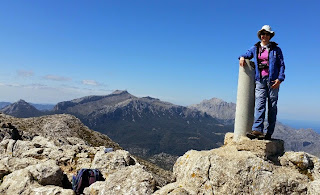 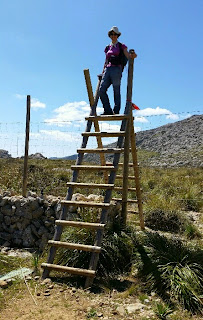 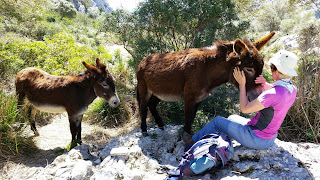 Whilst Robert and Lyn drove off somewhere to base themselves for a bike ride to and from sumptuous café and lunch breaks, Sue and I drove up to the small car park, Es Pixarells, at kilometre 17 on the Pollença to Lluc road.
A 10.20 start found us walking under a blue sky along the main road to km 17.4, before heading up a quiet tarmac lane past Menut to Binifaldó.
From here we enjoyed a classic five and a half hour circuit over Puig Tomir in perfect weather. A brilliant way to conclude our short trip to Mallorca. Sue is pictured (top) on the summit.
Our route is well described in Paddy Dillon's Cicerone guide - route number 21.
Highlights of the day include:
We saw a few folk, including a dozen or so German women on the summit, but a lot of the time it felt like just us in the wilderness.
The total walk was 17 km in six and a half hours, including ascent of around 700 metres. An excellent excursion. Highly recommended.
Later - a most enjoyable final evening with Robert and Lyn in the apartment.
That's it from Mallorca for now. I'll try to produce a slideshow when time permits.
Posted by Phreerunner at 22:05 No comments: 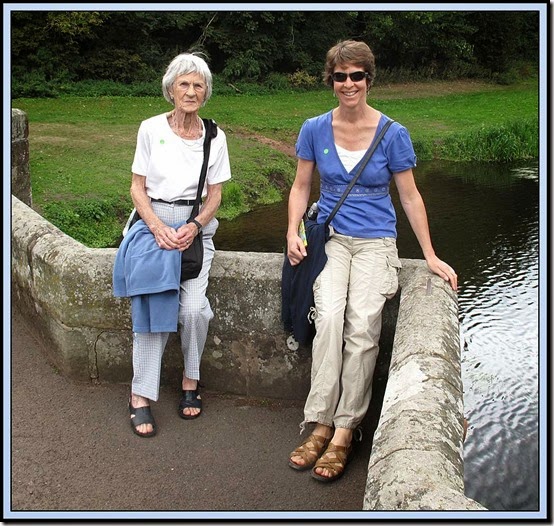 Many Happy Returns, Mother! (Pictured here with Sue at Shugborough, on 24 August 2011.) 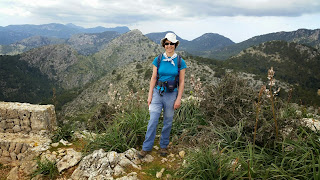 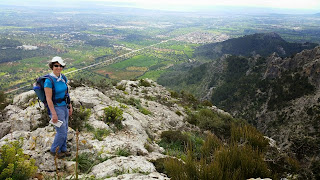 Yesterday Sue went up Mola, a small hill near Cala de Sant Vicente. Her report on that and a small extension to the walk described in Paddy's guide book will follow.
Today we planned to walk up Es Teix and wander along Archduke Lluís Salvador's 19th century pathways. But the high peaks were in cloud, on a drafty day. So we chose Paddy Dillon's route number 37 instead.
As it turned out, the original plan would have been fine, but the alternative was also a good choice, with excellent views from the summit, where I took today's pictures.
Coffee at our parking spot at Ca'n Penasso would have been a nice way to start, but the restaurant has had its day and needs pulling down.
Two types of spurge accompanied us up the gently graded switchback track past two sheep shelters, one with a deep well. There were more shelters near the summit.
Birds of prey circled above, one, a brightly coloured kite, coming low above our heads.
Three people followed us up the path, but it was a different German couple who appeared on the summit as we were finishing our lunch. A chaffinch lurked expectantly. Seagulls floated on the breeze - we could see the sea in several directions.
We descended back to the track at a col where there's a plaque erected in 1958 in memory of Leandro Ximenis, a well-known Mallorquín mountaineer.
The route down took us through a deep cleft, eventually reaching two sets of locked gates that we skillfully negotiated before completing our 13 km circuit past hedgerows laden with wild garlic.
In fact, we avoided a kilometre along a main road by diverting to the main square in Bunyola. Coffee and coke at Café Ca S'espardenyer was a good way to complete the outing, especially as nearby Café Tramuntana didn't seem to notice us.
A major navigational error on the way home didn't detract from the day. Robert and Lyn returned from a good ride to join us for afternoon tea by the pool, then we adjourned to 'Stay' in Port de Pollença for a meal to celebrate Lyn and Sue's recent birthdays.
Another fine Balearic day...
Posted by Phreerunner at 20:23 No comments: 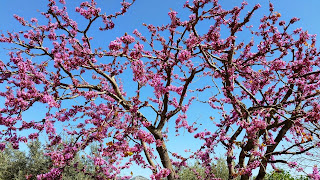 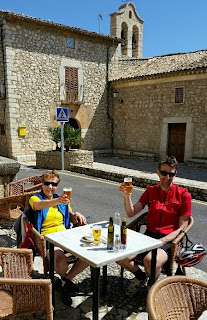 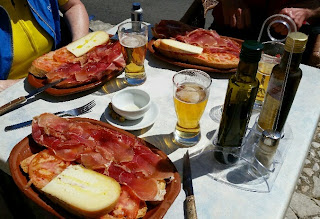 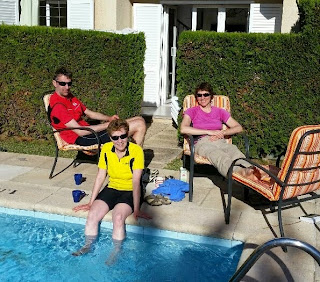 Today I discovered what it's like to ride with the Peleton.
The bike rides with Robert and Lyn are very gentle. Some would regard them as meanders. Many large groups of club cyclists whizz past us from time to time.
Today, battling after 60 km against a light headwind, I was passed by a group in yellow uniforms. They gave me very little space, cutting in front of me. So I tried to follow them. Suddenly, instead of battling the breeze, I found myself freewheeling in order to avoid a bump with the person ahead. I was quite oblivious of the team cars with flashing blue lights that were behind me, with Robert pedalling like fury behind them. They are the only team cars we have seen.
So the old man in the M&S tracksuit joined the Peleton for a while. From this day on he will view with admiration the efforts of those who either break away from the Peleton or find themselves having to catch up with it.
This morning we left the apartment in cool sunshine, soon passing lovely blossom and fine views to the nearby mountains. Lyn and I sauntered whilst Robert returned to base for her windproof jacket. Mallorca is very 'green' just now, the summer heat and dryness not yet having arrived. It's excellent cycling and walking weather.
There were lots of cycling groups out today. We got mixed into one of them before pausing at the Saint Miquel chapel, where cakes were being brought out in anticipation of a profitable day.
A side road past a busy rat got us to coffee in the sunshine at Moscari, before leisurely continuing our gently undulating route to Biniamar, and a jovial bar after 35 km for a huge lunch (pictured). We finished it all and were rewarded with a discount. The sun beat down. It was glorious weather today.
The afternoon was spent completing an 80 km circuit back to Port de Pollença. It took us seven and a half hours, of which four and a half were in the saddle, which I'm happy to report has not resulted in anything worse for me than a cricked neck.
After the Peleton incident at 60 km we entered the Nature Park where lots of birds can be admired, including rare crested coots and many other species. My banana - the only food I carry on such trips - was enjoyed at the top of an observation tower.
Back roads then delivered us back to 'poolside' (pictured), in my case after Ambrosio had been returned intact to Bruce at Pro-Cycles.
Our route today, for the record, was:
Port de Pollença >  Saint Miquel chapel > Campanet > Moscari (coffee - Bar es Poulton) > Binibona > Calmari > Mancor de la Vall > Biniamar (lunch) > Lloseta > Inca > Sapobla > Parc Naturel de S'Albufera > Port de Pollença
More details will be posted when the records from my Garmin gadget and my Canon camera have been downloaded.
Posted by Phreerunner at 20:23 3 comments: 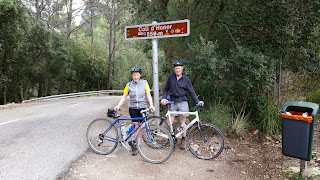 Whilst Sue had a mini adventure on Puig Caragoler (report to follow in due course), I joined Robert and Lyn for a bike ride from Biniali.
We set off at 10.30 on the following 57 km circuit:
Biniali > Santa Maria > Bunyola > Coll d'Honor > Orient > Alaro > Santa Maria > Biniali, taking minor roads wherever possible.
Jumpy the van found his usual spot by the roundabout outside Biniali, from where we cycled casually past vineyards and flower meadows towards Santa Maria. A busy spot with heavy traffic.
After a 'Robert's Ramble' in search of the correct exit from town, Robert and Lyn headed off in a third random direction. Unfortunately the traffic intervened and I had no idea where they had gone. Luckily it was sunny in the central square where I'd last seen them. Just as well as they'd gone 5 km up the unsigned road to Bunyola before realising I was missing!.
After some text messages, 45 minutes, and a futile attempt on my part to purchase a map, my two companions rather sheepishly reappeared and I finally escaped from the bustle of Santa Maria. That was an extra 10 km for Robert and Lyn, and a free coffee for me. The story will no doubt amuse Marcus.
Unfortunately, having passed some Little Egrets and ensconced ourselves outside a café in Bunyola, we were put off by the smoke and our apparent invisibility (Robert is a 6ft 8in dwarf) and moved on to commence the 40 minute climb to today's objective, Coll d'Honor. Apparently we passed an excellent cake shop on the way out of town - Robert noticed it was open but overlooked broadcasting the fact.
Anyway, there were good views back down to the town, and across to the nearby mountains.
A Blackcap narrowly dodged my spokes during the 350 metre ascent to the Coll. Once there, Robert kindly took today's photo of me and Lyn, with Hewie and Ambrosio in attendance.
A short descent saw us outside the restaurant at Orient, where I washed down their pasta bolognese with some cold San Miguel whilst the others washed down a sandwich and some salad with some cold coffee. Oh dear! especially as it had clouded over and cooled down, with Robert even alleging 'rain'.
It's a fast descent to Alaro, even with dangerously skinny tyres and a buffeting wind. Good fun though, especially with the added comfort of a windproof top and some warm legs.
Alaro was full of people, who we saw more than once as Robert once again wrestled with the geography of a Mallorcan town.
Eventually we found our way out and rode slowly back to Biniali, via Santa Maria, much less busy on the overcast afternoon, passing lots of swooping Hoopoes on the way.
I recorded 57 km in 3 hours 20 minutes cycling time, 6 and a half hours altogether. The others rode at least an extra 10 km, bless 'em!
Posted by Phreerunner at 23:08 2 comments: