Sunday 14 December 2014 – A Christmas Walk from Trentabank, and a Quiz 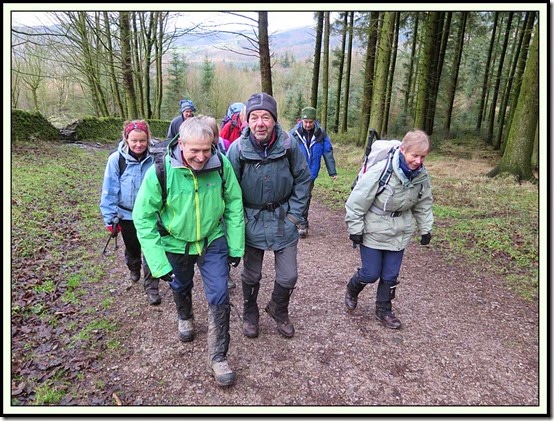 20 of us set off promptly from the car park at Trentabank. Well, 19 – Andrew having set off earlier due to his ‘broken leg pace’. He still managed better than Alan R and Sheila, who had to abandon due to Alan’s poorly knee, and regrettably Don and Liz failed to make it due to exhaustion following a 19 hour journey home from Turkey.

Some of us had entered the ranger’s office, despite the ‘Grumpy man’ notice on the door. Whilst there are various information boards within the office, the inmates took a dim view of those of us who had not used the £4.50 car park, and they certainly fulfilled the ‘Grumpy man’ image by chasing members of our party out of the warm room!

Anyway, no matter - in unexpectedly dry weather, we soon emerged from the forest onto the paving that leads to Shutlingsloe's summit. 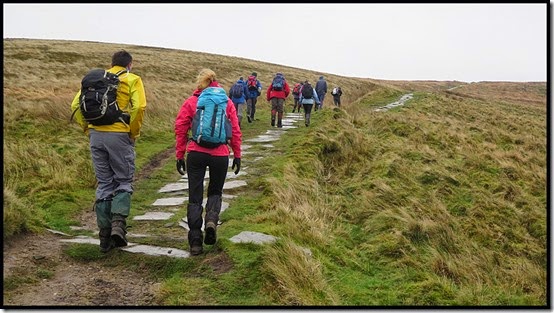 The fog was down as we mounted the steep steps that lead to the 506 metre summit.

We milled around for a while, waiting for the view to clear. 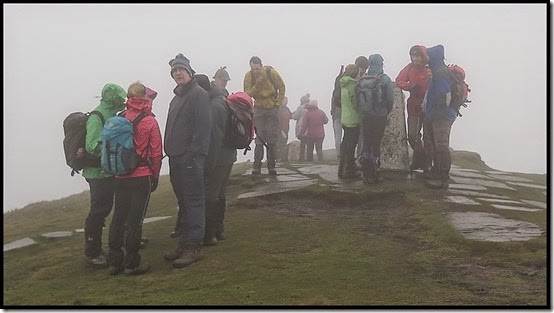 Joddrell Bank telescope can be seen from the summit, but today we had to rely on radio waves to pick it out.

Our objective for lunch, the Cat and Fiddle, was also on the horizon. Unfortunately unseen today, it does appear in the slideshow, as does Tittesworth Reservoir, which sometimes shines in the sunlight beyond the Roaches, from this lofty summit, ‘The Matterhorn of Cheshire’.

The mist was down as we descended to Banktop for elevenses, after which, suitably gorged with shortbread, we moved on to negotiate a bridge over the raging torrent of Clough Brook.

Then through a field to Clough House, albeit one of the party was found to be moving in the wrong direction after losing a tenner.

With the Cat & Fiddle now signposted, faster/thirstier members of the group could forge ahead up Cumberland Clough, without the need to worry about anyone getting lost. Cumberland Clough is the home of Cumberland Cottage and a plethora of small birds – tits, nuthatches, pigeons, jays, etc.

The rough track, excellent for mountain biking, led to a waterfall in Cumberland Brook, after which we continued up the brook, rising beside the torrent through Danesthorn Hollow. 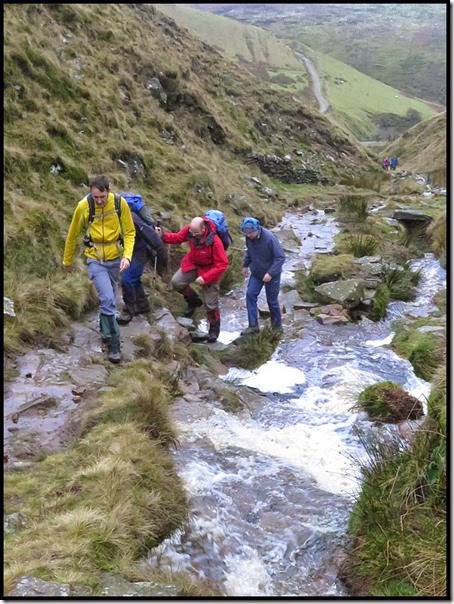 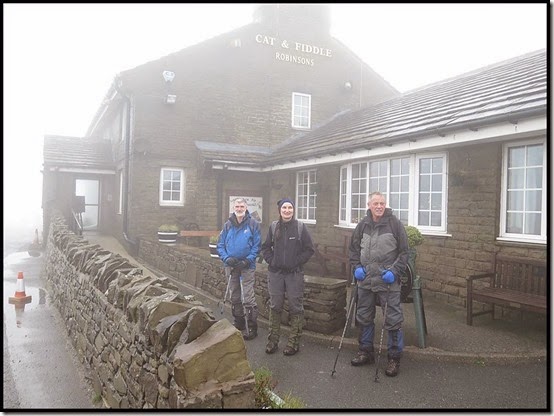 Bags were dumped, beers were purchased, crackers were pulled, hats were donned, jokes were swapped and rain lashed against the windows. Alan and Sheila had made it to the pub, despite Alan’s poorly knee, and the next three images are reproduced courtesy of their cameras.

There was a quiz. It’s a tradition. Sue and Alan made easy work of the questions…. 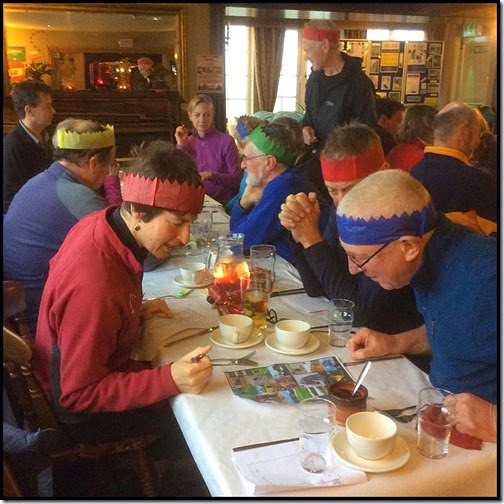 ... and of their lunches. Head chef Adam produced a Christmas lunch that matched our requirements perfectly. Thanks Adam, and Vienna, at The Cat.

Eventually it was time to mark the scripts - 28/35 was a pretty good winning score, with indulgent prizes for the winners. 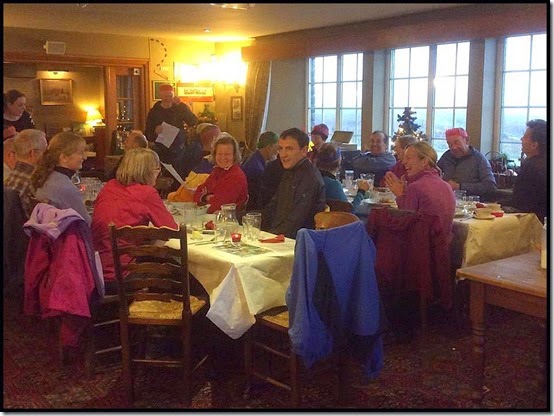 Soon, well – not that soon, we spent two and a half hours in The Cat - it was time to brave the elements, albeit the rain had subsided by now.

Our colourful selection of waterproofs was perhaps the brightest feature of the day, apart from everybody’s jolly demeanour. 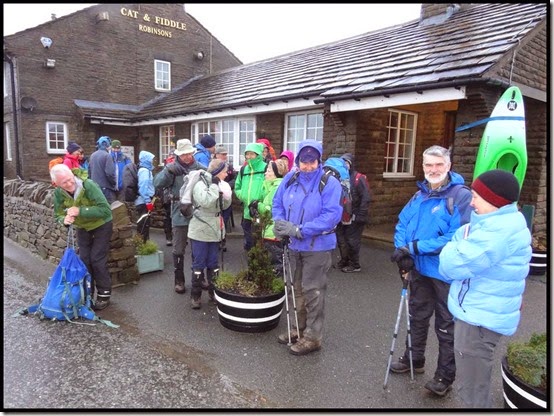 Then we trudged off, beside the A537 road.

Shutlingsloe seemed some way off, with sunshine even further away. 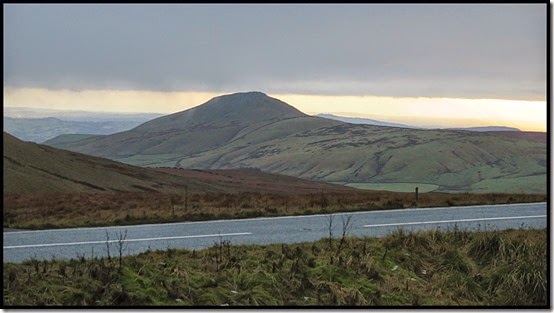 We soon left the road, to enjoy excellent paths all the way back to Trentabank. By the time we got to Bottom-of-the-Oven, the light had diminished to the extent that a tripod might be needed for further pictures.

When we reached Macclesfield Forest’s chapel it was nearly dark. Andrew left to walk back along the quiet road, but beyond the chapel, a superb woodland walk, with lighting provided by a giant torch, saw us through the northern fringe of Macclesfield Forest. 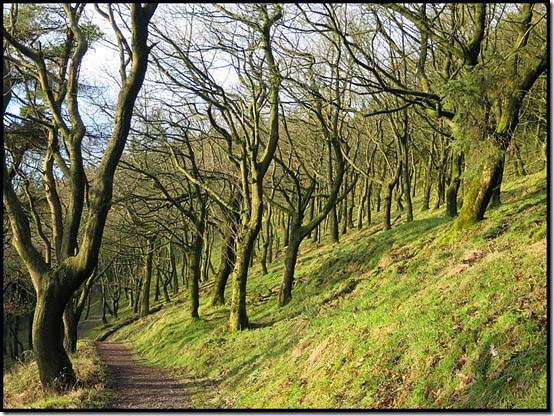 On the way, we passed a tree, laden with Christmas gifts for children and fronted by a large wooden box for donations etc. Wonderful!

The Leather's Smithy was soon reached, followed by a stroll alongside Ridgegate Reservoir to regain our cars under the beady eyes of the resident little grebes and cormorants. Whilst some had used torches, others amongst us found the ambient light quite sufficient to illuminate our way to a 4.30 pm finish.

I enjoy this route, I hope others agree that it’s a good one. 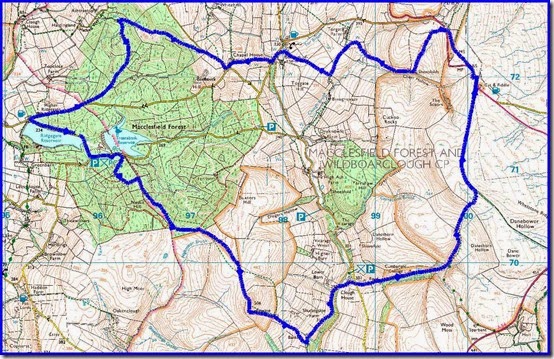 There’s a 59 image slideshow, including pictures from a sunny day a couple of weeks earlier, here. Click on the first picture, then click ‘slideshow’. [Those pictures may appear here later this week, following our evening walk up Shutlingsloe on Thursday (18/12) – starting from Trentabank Car Park, 7.30 pm, all welcome.]

In case anyone is interested, here’s the quiz – click here for a larger version that you can magnify: 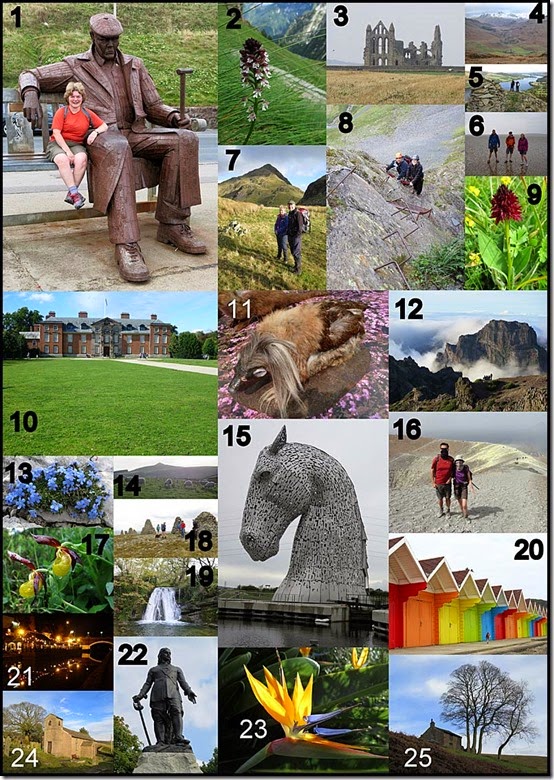 All photos taken within the last six months.
10 Bonus Points

If anyone would like to have a go at this, feel free to do so – I’ll send a small prize to anyone scoring 30 or more by 31 December – entries to 2014quiz@topwalks.com.
Posted by Phreerunner at 11:22 4 comments: