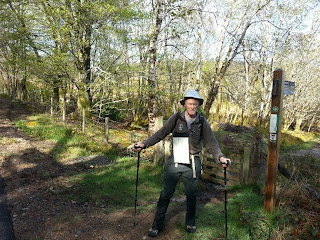 Route: More or less as planned
See http:/www.topwalks.com/tgoc2013.html Day 1 for map
Distance: 23km (Cum 23)
Ascent: 1150 metres (Cum 1150)
Time taken: 8 hrs including 1.4 hrs stops
Weather: sunny for the first couple of hours, then gradually wetter.
And wetter.
Challengers encountered: none after  leaving the start. In fact I've seen nobody since 10am this morning.
An interesting first day. I was first of the ten Plockton starters to sign out - spot on 9 o'clock on a perfect sunny morning. I left John, Sue, Jane, Graham and Tina to their breakfasts. Sadly Louise, although reportedly in Plockton, wasn't about so it'll probably be a while before we meet up.
Andrew kindly guided me out of town along his favourite lochside path beside the shimmering waters of Loch Carron. Then I was on my own. All day.
After an easy start past beds of wood sorrel and chirping birds, the section of jungle beyond Loch Achaidh na h-Inich came as a bit of a shock. It wasn't the first non existent path on today's map. After muscling my way through the dense forest and locating a lovely old forest path that circumvented some forest operations, I came upon the sight of Auchtertyre Hill directly in front of me.
I can't say I would recommend climbing Auchtertyre Hill from the west. If you do choose that route, take care. The contours are very close together.  The heather is deep and much of it had recently been burnt. When I was half way up it started to rain. Now both my walking gear and my waterproofs are streaked with black lines from the charred heather. If I encounter anything harder than the steep gully near the top on this trip I'll be even more out of my comfort zone.
The view from the summit would have been better if it hadn't been raining.
It was much easier on the other side, though the 60 metre ascent of the day's second hill, Maol Mor, was pretty abrupt.
The route I'd chosen followed that of the old A890, when it was single track.  It's amazing how things can change so much. Bushes - Juniper perhaps - presented an impenetrable barrier at times.  Progress was slow,  but road walking was avoided.
Then came an easy 5km of forestry track,  with wrens, cuckoos and small warblers in attendance as well as the ubiquitous chaffinches.
That section ended all too soon, when the ongoing route beyond point 7 on the map (see link above) proved to be absent from the ground. So I batttled through some more jungle and then wandered up to an unplanned high point of the day,  the 486 metre summit of Carn nan Iomairean.
After admiring the diminishing views,  I trotted down to Loch nan Gillean and by 5pm was putting the new tent up in increasingly heavy rain. Having chosen a spot with a view, the cloud came down and I can't see a thing.
It proved a good time to stop. I'm having a pleasant evening in the tent, which luckily and most surprisingly has 'phone reception.
Alan R - S3 spell checker?
Sent from my TNSC2's first wild camp at NG 922 355
Posted by Phreerunner at 20:48 4 comments:

TGO Challenge 2013 - Getting to the start 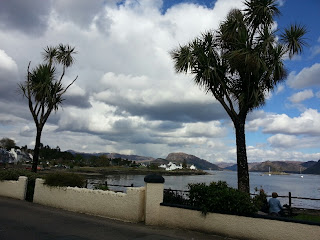 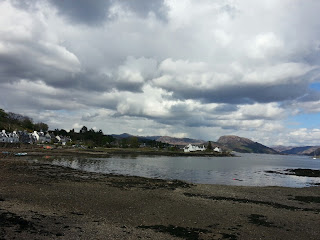 Sleep didn't come easily.  The 5.15 alarm wasn't needed.  I enjoyed breakfast with Sue, who kindly rose early and dropped me at Piccadilly station, before heading off for work, only five minutes away.  So she may have had quite a long day!
The 6.33 am First Trans-Pennine express to Glasgow was quiet and on time.  Not a Challenger in sight.  Not in the executive compartment, anyway!
The blue skies and tree greenery slowly diminished as we headed north.  Our swifts are back, but I don't think I'll be seeing any during the next couple of weeks.
Later...
Plockton (is designed by) is bathed in late afternoon sunshine.  The 10 hour journey went without a hitch, much of the time being taken with renewing old acquaintances and chatting with new ones.
Whilst I haven't spotted any other Challengers in Plockton, Andrew and Rosemary were here to greet me with tea and cake, and there's the mouth watering prospect of a meal at Shores restaurant to come shortly.
Posted by Phreerunner at 18:18 10 comments: 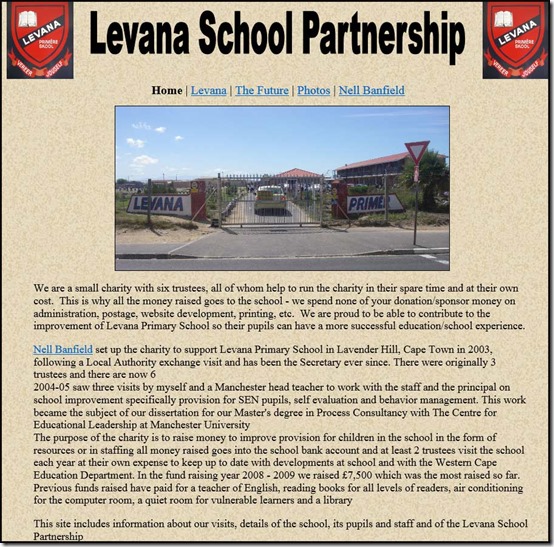 Please bear with me for a quick plug for this small charity, Levana School Partnership.

Sue and I are delighted to be able to help raise a bit of cash for this township primary school in Cape Town.  We know that over the years the funding received from the charity has made a big difference to the school.

We are joining my son Mike, and our friend Roger, in a sub team of four.  The event is the Manchester 10 kilometre (6 miles) race, which will be held on Sunday 26 May.  We’d like to have exceeded our sponsorship target of £750 by then.

Every little helps, so please don’t be embarrassed to donate just a fiver towards this worthy cause, should you feel inclined to support it.  Our Just Giving site, in Mike’s name, is here.  Our thanks go to the 31 people who have already donated – your contributions are much appreciated.

My daughter, Kate, is also taking part, but in a rather more leisurely fashion due to pregnancy.  She’ll be walking.  There are still a number of places available in our team of 20, so if anyone out there would like to take part, either walking or running, they should contact Nell at nell.banfield@ntlworld.com as soon as possible.

Our ‘sub team’ will all be trying to break the one hour barrier, and I promise to go as fast as I can despite tired legs from the TGO Challenge and not having been running for a month or so. 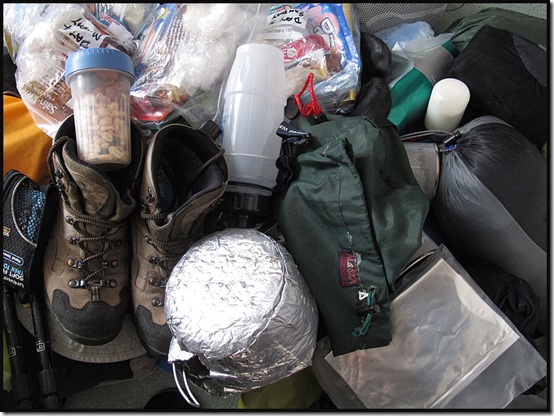 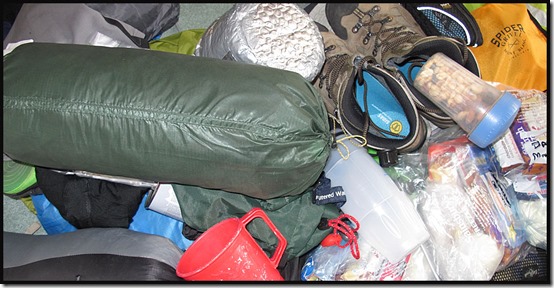 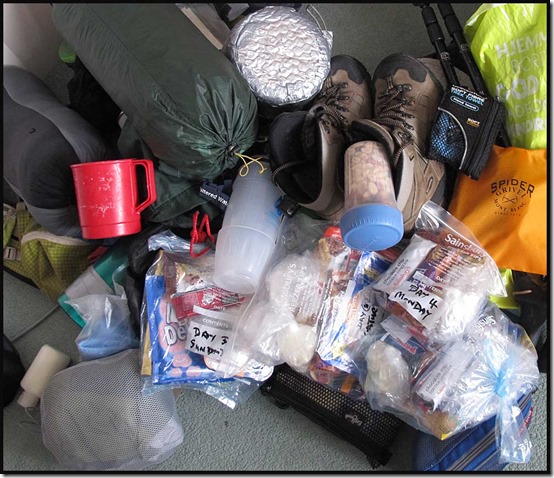 I’d like to be able to post a picture of some neatly laid out gear, but I can’t.  These snaps were taken just before it was thrown into a sack a week ago, since when it has been wending its way to Plockton.  I hope to be reunited with it tomorrow, when I should be whisked up to my starting point, leaving Manchester’s Piccadilly Station at 6.33am and arriving in Plockton for afternoon tea sometime after 3pm, via Glasgow and Inverness.

There’s a web page with my planned route, kit list, and links to previous Challenge exploits, here.  This may be helpful to anyone who decides to follow my progress over the next couple of weeks.  You’ll have to bear with me a little on that score, as mastering the complexities of the Samsung Galaxy S3 is more than a trifle taxing!

Good luck to others who have been lucky enough to get places on this year’s Challenge.  I hope to see some of you in Plockton, and then maybe en route to Montrose (via Frazerburgh in my case).

Have a good one… 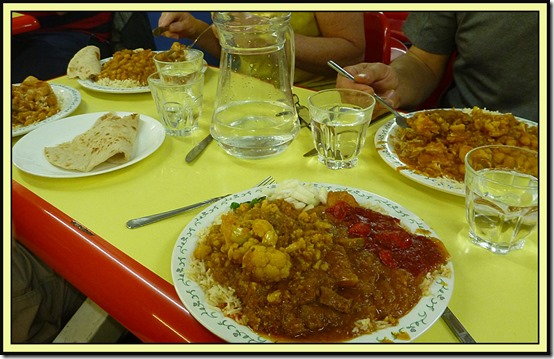 This was a nice little jaunt by a slightly odd route, with Rick, JJ, Alan R and Viv.

We met outside Timperley station.

“We are on the wrong side of the road” I observed, spotting the others in an unconventional spot.

“I have a cunning plan” announced JJ.

So saying, we headed off towards Altrincham, which those familiar with the geography of Timperley may recognise as being in the wrong direction for ‘This & That’, a curry house in Shudehill. 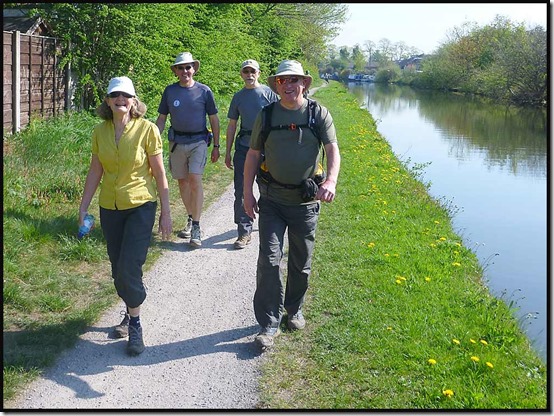 We strode on through Altrincham, past the Budenberg Haus Projekte. 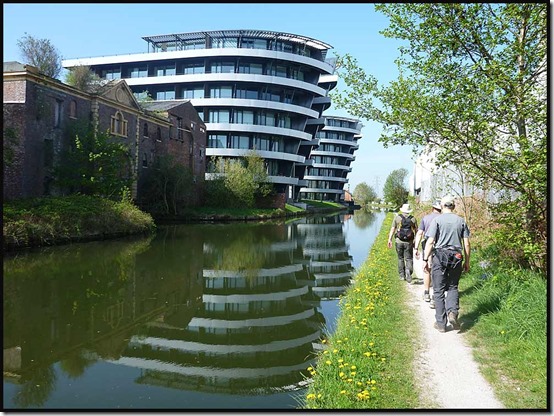 Altrincham’s bluebells were wilting in their unaccustomed sunshine. 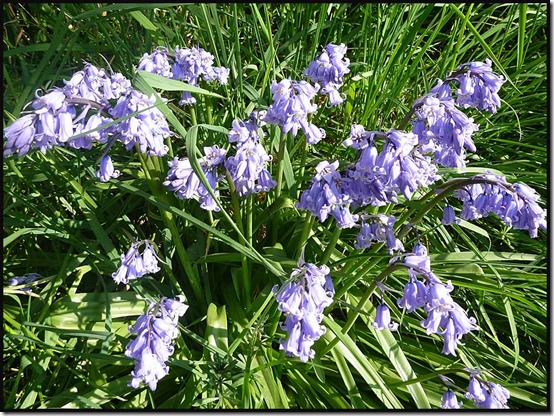 The Bay Malton signalled our departure from the Bridgewater Canal, in favour of the Trans Pennine Trail (TPT).  The TPT follows roads as far as our local hi-tech waste disposal centre, so JJ carefully directed us along some pleasant alternative footpaths.

The TPT then remains off road past Carrington Moss and beside the Carrington Spur to reach the River Mersey, by which time Alan hadn’t much idea of his whereabouts. 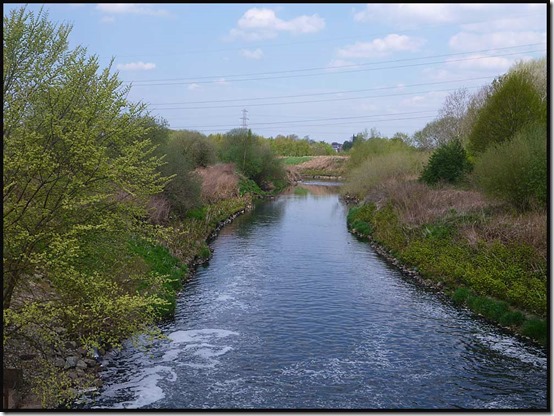 Cake kept him going, as it did the other three.  They had all suffered yesterday at the hands of R Norman, the master plumber from Horwich, on one of his short guided walks.  17 miles or so. 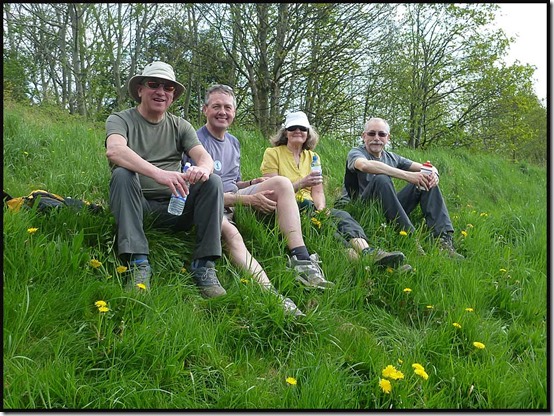 A heron was vying with the kingfishers to stab the fish on the salmon leap. 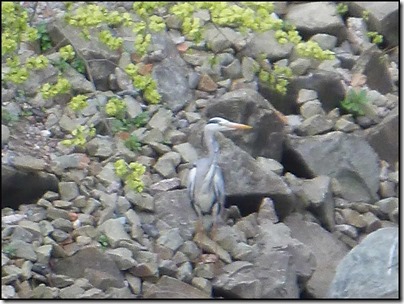 Alan soon relocated himself as we crossed about ten lanes of the M60 motorway on our journey back to the Bridgewater Canal in Stretford.  Luckily a footbridge was provided.

The locals seemed to know JJ. 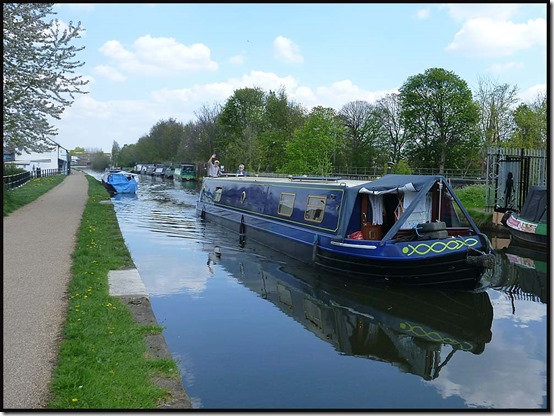 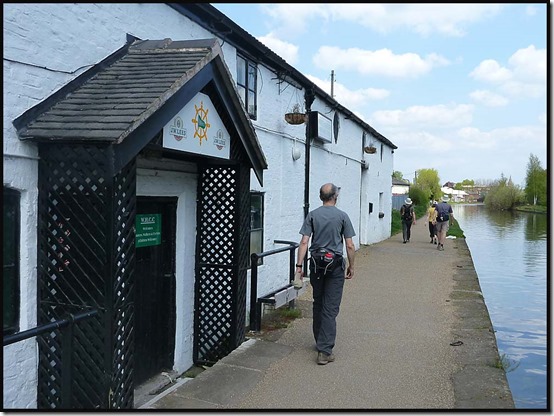 A few metres further on, JJ spotted a Metrolink tram station.  “It’s gone 12.30, time for a curry” he announced.  So we all jumped on a tram to Shudehill and enjoyed said curry.

A delightful outing of about 14 km (around 9 miles), with not much ascent at all, in about 3 hours.  Thanks go to JJ for organising it.

Tales from the river bank 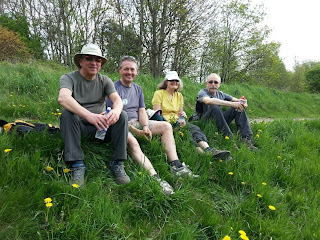 Sun worshippers by the River Mersey.  In search of curry.
Sent from the river bank
Posted by Phreerunner at 11:40 2 comments: 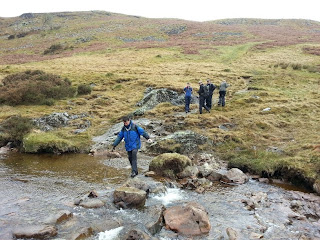 Rain this morning kept us and eleven others company for the ascent of these two hills, following which Sue and I were joined by Richard and Jenny for a sunny stroll around Loweswater.
The picture should show walkers crossing Mosedale Beck, on the descent from Hen Comb.
We did about 11 miles and conquered five Birketts.  Others did more.
Sent in a hurry from Martin's Mobile
Posted by Phreerunner at 17:43 1 comment: