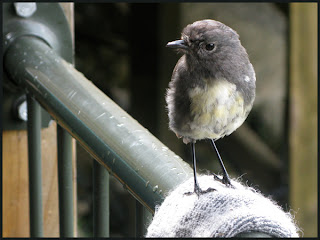 The robins are mating in our garden, but what has happened here?
1. Thanks to Bob and Rose at backpackinglight.co.uk for sending a new rucksack liner so quickly. I wonder whether Exped will provide a refund, or has this 65 litre liner, bought for last year’s TGO Challenge, really worn out within a year? The old one, with many pinhole perforations, is in the post back to Bob. [Good value regardless – it has endured much use.]

2. It was a lovely day out yesterday with Daryl. But I can’t help thinking….
...Perhaps he should ruthlessly go through his bag and send a parcel home. The really cold weather should be at an end after this weekend.
...He has a fine pair of boots, but heavy. Are they helping or hindering his ankle injury? I might yearn for something lighter in his position…
...I questioned why (how) he could put up with a serious amount of road walking. Today his blog will answer that question most eloquently.
...Daryl certainly has his remote blogging system well sorted.

3. Now how can I do that (blog remotely without recourse to an internet cafe)? I was thinking of the Blackberry 8120 that I can get on my Orange contract, but Daryl thinks there may be a problem with word and excel documents. Do I really need those? Ho hum. And blogging from Italy in the summer using the phone looks as if it may be very expensive. Perhaps the blog will need some holidays. Any thoughts on all this will be welcome, by comment or email. They really will be welcome!

4. The psychic rattle
Strange that having rattled from new, and some 6 years down the line having developed an exacerbated form of the ‘disease’, our car somehow recognised the presence of an acoustics engineer keen to analyse the problem.
This is not a whinge (I am quite attached to our rattly old car), just an observation; why should it have run as silently as ever in its entire life when Daryl, acoustics engineer, was a passenger?

5. Blog goes on Holiday
All will be quiet for a few days as we are backpacking in the wilds of Scotland (subject to weather) and (see 3 above) still need the right equipment to blog, though I don’t recollect being able to get a phone signal from the area in question.
Back next week…
Posted by Phreerunner at 23:42 5 comments:

Tuesday 1 April 2008 - A stroll along the Lancaster Canal with Daryl May, JOGLER 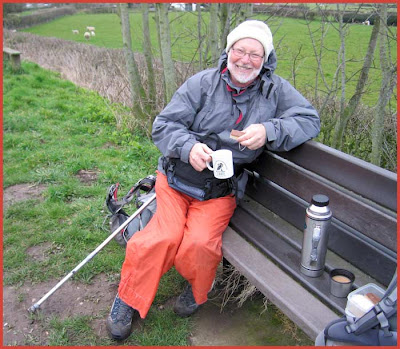 Since returning from New Zealand a couple of weeks ago I had gradually become aware of the presence in the UK of Daryl May, a retired acoustics engineer in the aerospace industry. Last year Daryl walked from Lands End to John o’Groats; this year he returned to John o’Groats for the walk back to Lands End!

A quick look at some of the outdoor blogs, in particular Alan Sloman’s – he did LEJOG last year – reveals that Daryl is not alone in his outdoors venture this year.

I’d looked at Daryl’s well written and entertaining blog, and had read of his difficulties with a septic blister and a poorly ankle. He lives in Tampa, Florida, so unlike Alan last year he has few friends and family to visit and encourage him. But such folk do have an extended ‘family’, such as Ian Shiel, who recently intercepted Daryl on Beattock summit with hot soup and other goodies.

I’d noted Daryl’s route and surmised that I could intercept him myself today. Moreover, whereas I have hiked frequently in the Trough of Bowland to the east of the M6 motorway, I had never walked much of the section of the Lancaster canal between Lancaster and Preston. So here was my chance.

After many helpful exchanges with Ian, an experienced ‘end-to-end’er, I set off to find Daryl after stashing my bike in the back of the car. After getting covered with oil and dirt in the process I had a good feeling – ie the bike would not be needed!

And so it proved, the unmistakable figure of an elderly man in orange trousers was moving slowly out of Galgate on a footpath beside the A6 road, just loosening up after his sojourn at The New Inn. I had time to turn, park, boot up, and greet this ‘Hobson’, as Daryl sometimes refers to himself, just where a path leads from the A6 to the rather more peaceful towpath of the Lancaster Canal.

Luckily he agreed to come with me, and we set off over an iron gate securely fastened with barbed wire, across a muddy field in search of the canal. When we got to it, to my surprise, there was no easy access to the canal. The barbed fence and steep bank could have been negotiated but I think Daryl was relieved to avoid that in favour of walking a short way north to gain legitimate entry to the towpath where the waterway to picturesque Glasson Dock diverges from the main canal.

It was good to chat with Daryl. To him this is not a wilderness challenge involving high level long-distance routes such as the Pennine Way. It’s a personal challenge to reach Lands End in time to catch his flight home in mid May. So if he has to walk on roads, so be it. And he does need to do that in order to maintain his schedule, which after his delay due to injury in Scotland has left him with only a very small number of days off.

I’m sure he will enjoy more company over the coming days. His main journal page is here, and he is currently in Chapter 6.

The time flew past as we strolled down the canal, followed for some way by an attentive swan, with chaffinches, great tits and goldfinches in the hedgerows, and the occasional distinct bubbly musical song of a curlew in the fields.

Strategically placed benches helped Daryl rest his sore ankle, and where they were absent a grassy bank or stone steps could usually be found. And of course we scoffed Sue’s CCS (see here) along with our mugs of tea.

Lunch was taken on a bench just outside Garstang. I’d packed a few provisions and I think Daryl enjoyed the smoked salmon and cream cheese on freshly baked bread. Just around the corner in Th’Owd Tithe Barn, a characterful canalside pub dating back to 1710 and originally a tithe barn used for the storage of corn, pints of Strongbow and Cumberland Ale refreshed us for the afternoon.

Passing lots of quacking mallards, and the occasional barge, we continued south, closer now to the frighteningly fast inter city trains and the rumble of motorway traffic. It was very pleasant though, and I was disappointed to reach the edge of Bilsborrow, where the A6 provides a shorter route south than the meandering canal.

Whilst Daryl continued along the road for a couple of miles I explored a newly opened and vast Barton Grange Garden Centre before catching a bus back to Galgate and returning to pick up Daryl and provide him with food and lodging, with a promise to return him to the same spot the following morning.

It was indeed a very pleasant evening.

Here’s an overview of today’s route. I walked about 19 km in 6 hours including stops, Daryl did more than that. 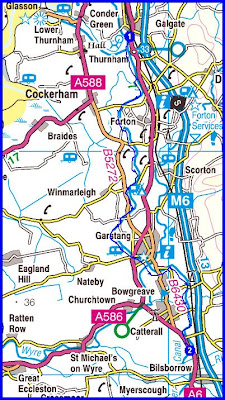 Sunday 30 March 2008 - Dipping and Fishing in the Goyt Valley

The clocks changed today. So our evenings will be blessed with the chatter of the birds and the glint of the declining sun for the next six months or so. Whoopee!
This morning, however, after losing the hour that propels us into ‘summertime’, we had foolishly planned a walk to start at 10 am. And a phone message indicated we would have company, so we left in plenty of time to get to the Pym Chair rendezvous for a walk in the Goyt Valley.
But Wilmslow was closed for its annual half-marathon event, necessitating time consuming extrication from its traffic jam and a lengthy diversionary route.
Sue and Phil were puzzled but relaxed about our lateness. It’s usually the other way round, but Phil had been up early ringing today.
From a balmy morning in Timperley we had been transported to rather different conditions up at Pym Chair. The car doors were at risk of serious damage from the strong icy wind.
We soon warmed up on the good path to Windgather Rocks, a mecca for climbers but deserted this morning, as Pym Chair had been.
On down Taxal Edge, we watched lapwings fluttering wildly in the wind, before dropping down into the calm of the valley where this lone tree stood proud against the deep blue sky. 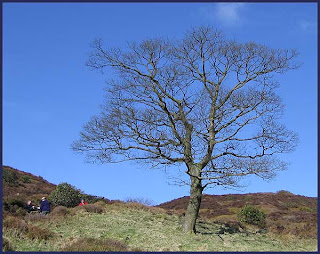 Down here, out of the wind, it was a lovely day for a stroll. 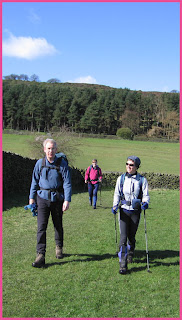 Entering the smart hamlet of Taxal, we walked down the sturdy ancient cobbles that led past the church that was positioned serenely in a bed of daffodils. 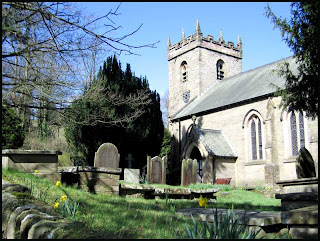 The River Goyt can be forded down here, but we chose the footbridge and then enjoyed a most scenic stroll through woods and fields beside the Goyt to Fernilee Reservoir.
Pausing to transfer tea from flasks to stomachs we watched a dipper breakfasting along the fast flowing stretch of water. Then the unmistakable blue flash of a kingfisher further brightened our day.
Some of the trees hereabouts reminded us of the moss laden ‘bush’ we had so much enjoyed in New Zealand. 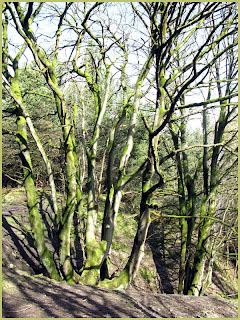 After helping to reunite a youthful jogger with her mother, we walked up the bank to Errwood Reservoir. There are a number of benches along here, one of which proved an excellent lunch spot. 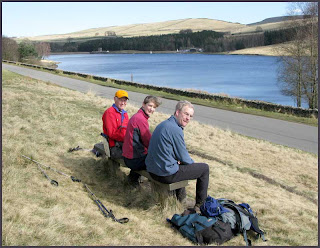 The path up Stake Side brought back memories of the ‘Four Inns’ walk that I did a few years ago - at 45 miles, it’s a full day out, and this path is memorable for being the last major ascent on that walk. 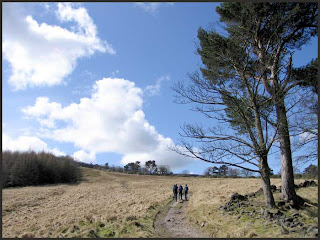 But today it was easy going, and after assisting some misplaced pensioners with their route back to Pym Chair (they had a map but couldn’t use it) we soon found ourselves up at Shining Tor, the highest point in Cheshire, with great views in all directions. 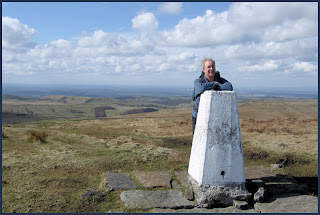 [Note that the Cat and Fiddle Inn just to the south of our path would be an easy (2.5 km return) diversion for anyone following this route and wanting a pub lunch.]

The path between Shining Tor and Pym Chair used to be a difficult boggy route, but a few years ago stone slabs were laid and the surrounding land has now virtually recovered from its previous devastation. We noticed that some netting had been laid, presumably to aid the recovery process. 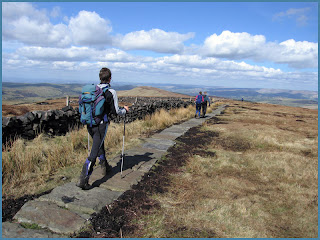 Back at Pym Chair at 3 o clock, the car park was now full, a bright yellow radio controlled glider was being skilfully manoeuvred in the wind, a kite was flapping threateningly above our heads, and kestrels were soaring gracefully.

Apparently Pym Chair takes its name from a formation of rocks that once stood on the ridge near here. There is a choice of local legends about the man known as ‘Pym’.
Perhaps he was a non-conformist preacher whose pulpit here was away from the eyes and ears of the authorities who prohibited such events.
Or perhaps he was the highwayman who used to watch from Pym Chair and then ambush the packhorse trains passing below the rocks with their cargoes of salt from Cheshire or coal, lime or lead from Derbyshire on this route which has linked Cheshire and Derbyshire since Roman times and was used well into the 19th century.

Our route is outlined below – it was about 16 km, with 550 metres of ascent, and took us about 4 hours plus stops. 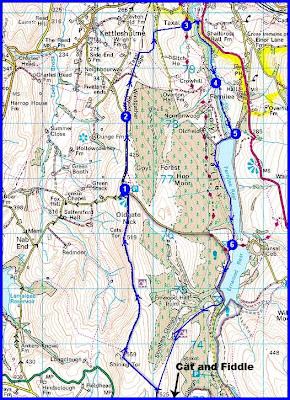 Posted by Phreerunner at 11:42 No comments: