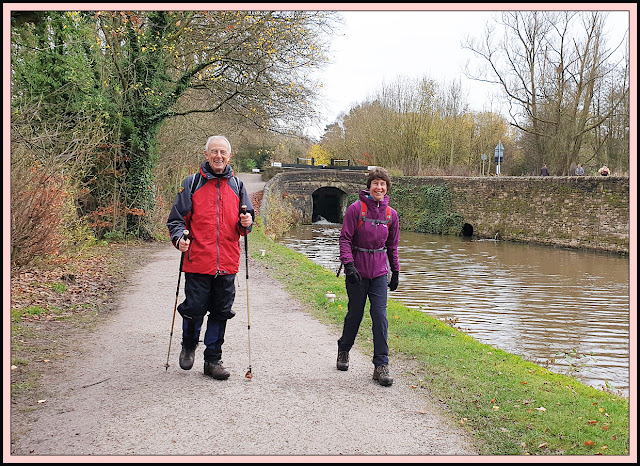 Graeme joined Sue and me on the last of the current series of Friday walks, which as in March to June this year are now curtailed by virtue of Lockdown requirements. (I'll still be walking, but companions will be limited in number.)

It's a pleasant walk alongside the Peak Forest Canal from Marple Station to the aqueduct that dates from 1800. The canal is in a brick-built channel lined with puddled clay, 100 feet above the River Goyt. 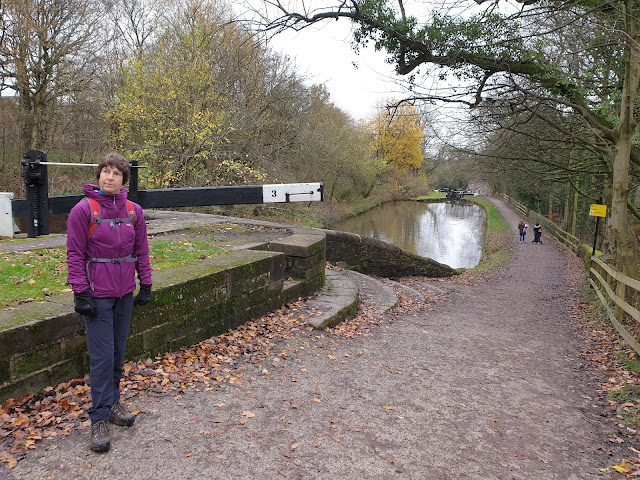 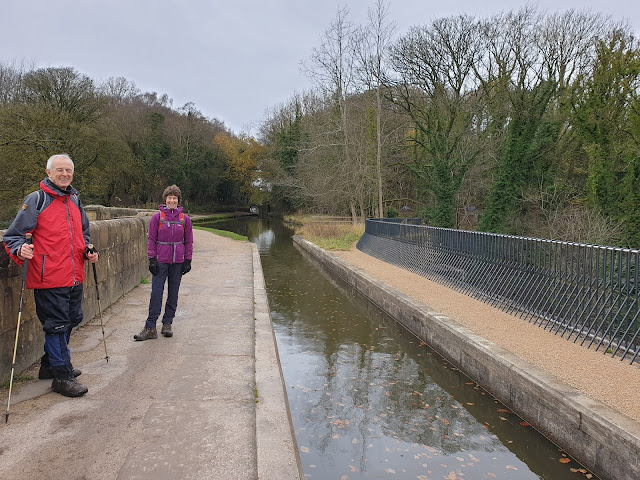 A fancy new fence has been erected on the opposite side of the towpath. 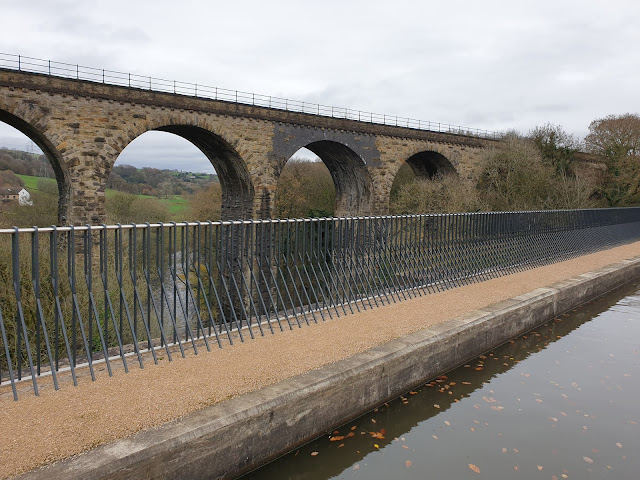 Sue claimed that there had previously been a wall here, but this picture taken during an evening walk with Stockport Walking and Outdoors Group confirms my recollection that there was no barrier at all on that side of the canal, where a tossed banana skin would land 100 feet below in the river. 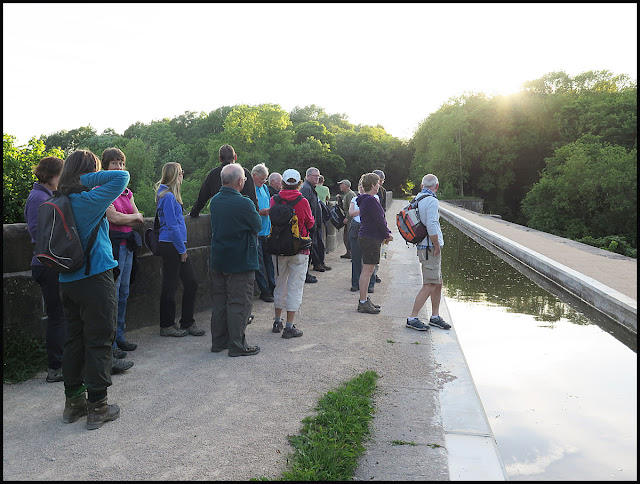 Marple Aqueduct is supposed to be the tallest in Britain. It was later dwarfed by the neighbouring railway viaduct. That dates from 1865 and took just a year to construct, compared with five years for the aqueduct. 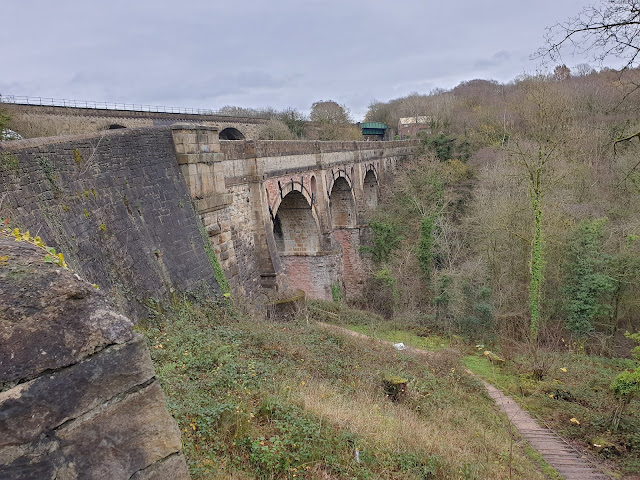 There's an interesting information board - click on the image to get a readable version. 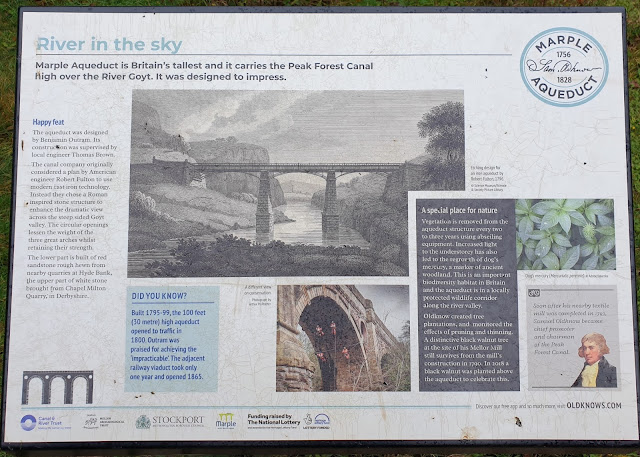 At this time of year there's a pretty ubiquitous feature of many country walks in Cheshire, and this one was no exception. Mud. After leaving the secure surface of the towpath, we dropped under both the aqueduct and the viaduct and headed up very muddy fields to Upper Watermeetings Farm, with a good view back to the viaduct. 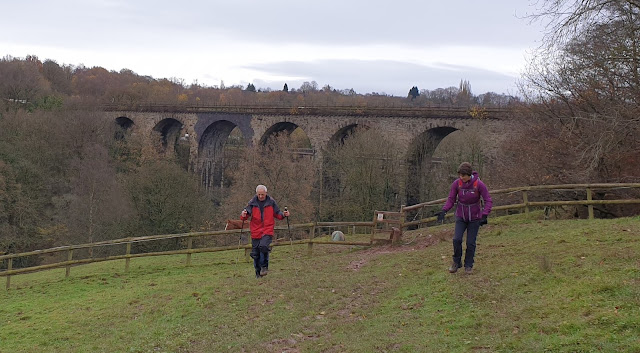 Beyond Lower Watermeetings Farm, where a friendly lady was busy keeping the yard in (very welcome) pristine condition, another muddy field led to a well signposted path that in turn led to the slithery bank of the River Etherow, shortly before it joins the Goyt. 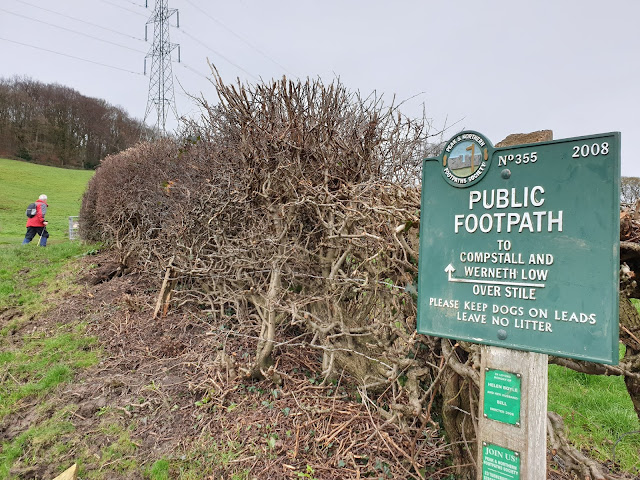 I nearly missed the steep steps that lead up to the west of Compstall Hall and cross a main road. Beyond that, there's a pleasant meadow in which we paused for coffee and fudge, before continuing on an undulating path, with a slippery footbridge over Gigg Brook. 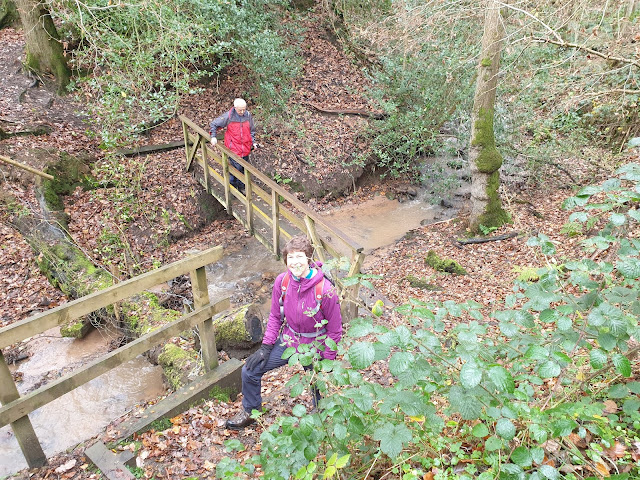 We soon found ourselves on the narrow lane to Campville Farm, from where a path leads in to Etherow Country Park, where we took in a loop around Keg Pool to reach a path that runs between the pool, and the River Etherow that is pictured below. 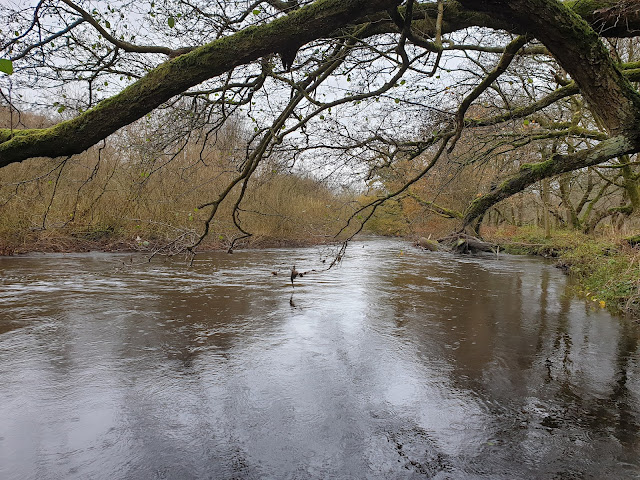 At the end of the Pool there's a large tap that can presumably be used to release water into the river, which flows at a lower level. 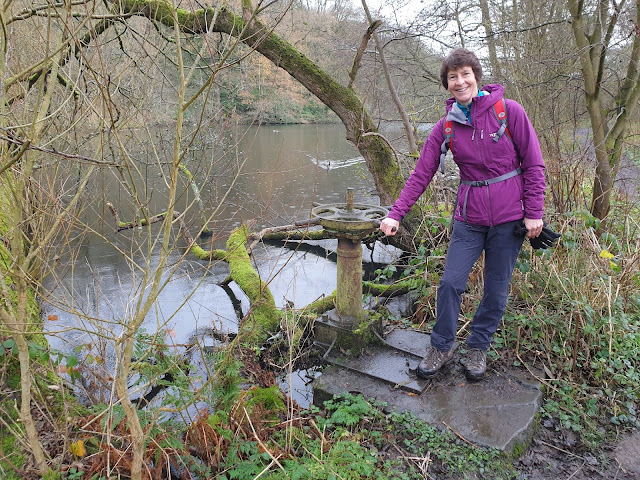 We soon found ourselves on the main thoroughfare of the park, where a chap was throwing bird seed at the mandarin ducks. 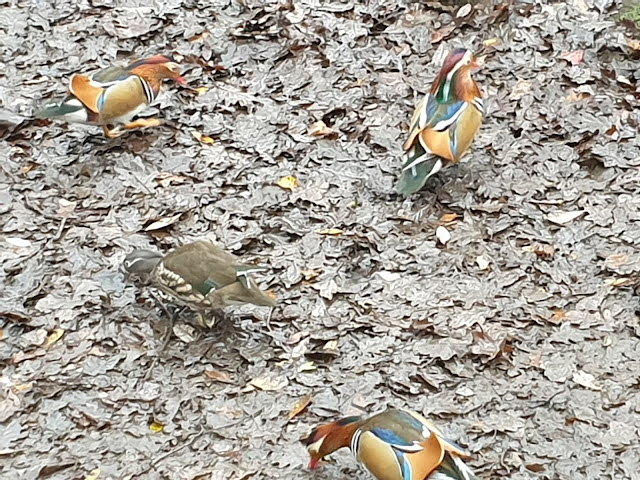 There's a lot of bird life here, including cormorants and a range of ducks and gulls and smaller water fowl like coots and moorhens.
The cafe was open, but the visitor centre area looked very busy. To maintain our social distancing, we turned our back on it and crossed the river to pass the George before entering Brabyn's Park.
The long closed George, once a great little pub with an immaculate bowling green, is showing signs of a new life, with a bright blue front door and a sign that says 'VIP Pet Supplies will be Opening Here Soon'. Here's hoping that this run down enclave of Compstall will soon have a fresh lease of life, if not as a pub. 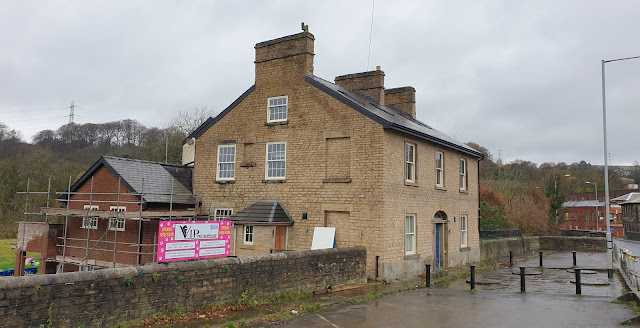 Brabyn's Park is entered by way of a cast iron bridge dating from 1813 (the iron bridge in Ironbridge was built in 1779), a notable structure built for carriages to access the estate from Compstall, that has recently been transformed from a health and safety risk to a solid structure that will last for many more years. There's some interesting history in this pamphlet dated 2006. There's a listening post that we wound up and listened to, that according to this website was installed in 2012, when there was also a sculpture and information plaque on a viewing platform. Sadly that sculpture etc have now gone and the viewing platform is closed off. 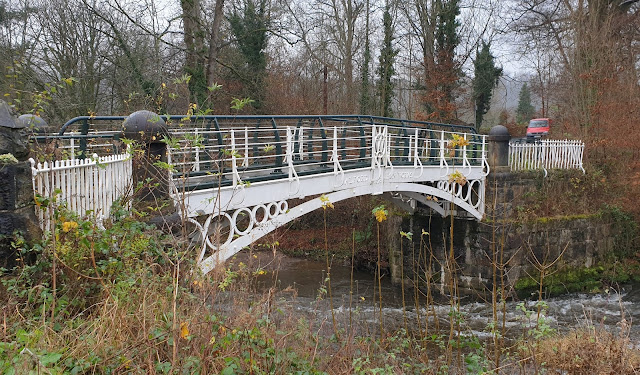 By now the weather had turned a little drizzly, but at least there was a firm path through Brabyn's Park and back to the car park next to the Midland.
Here's our route - just a shade under 11 km, with 250 metres ascent. It took us an amiable 3.5 hours. 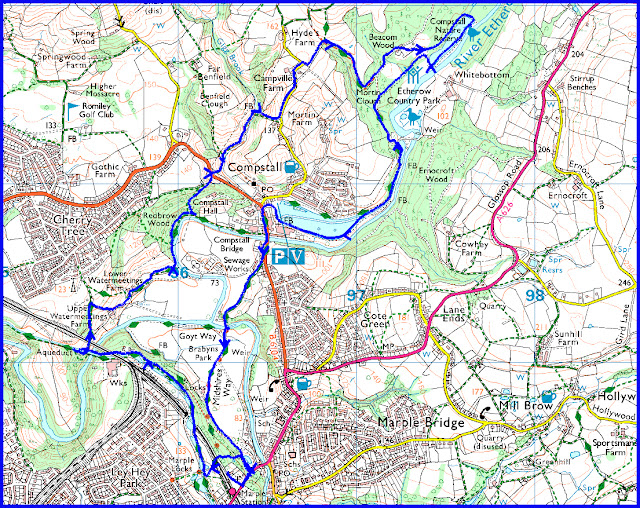 Posted by Phreerunner at 15:00 No comments: 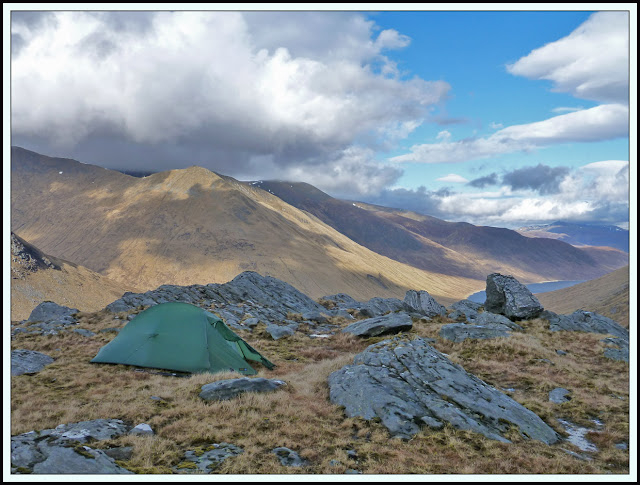 This was a magnificent camping spot at NH057412, at 630 metres above sea level, to the north west of Lurg Mhor, which you can see in the background in the picture below.

I'd met two other walkers, otherwise saw nobody all day.

Despite the sunny evening, it was a blustery, rainy night. I slept well. The new tent performed well. 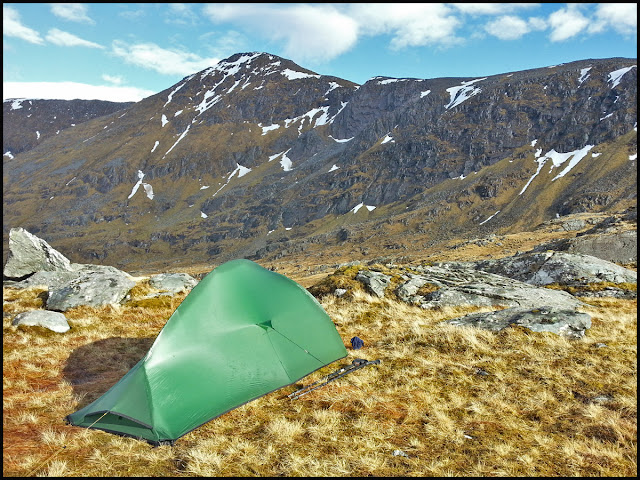 Posted by Phreerunner at 20:32 No comments:

Autumn turns to Winter - What a Difference a Week Makes 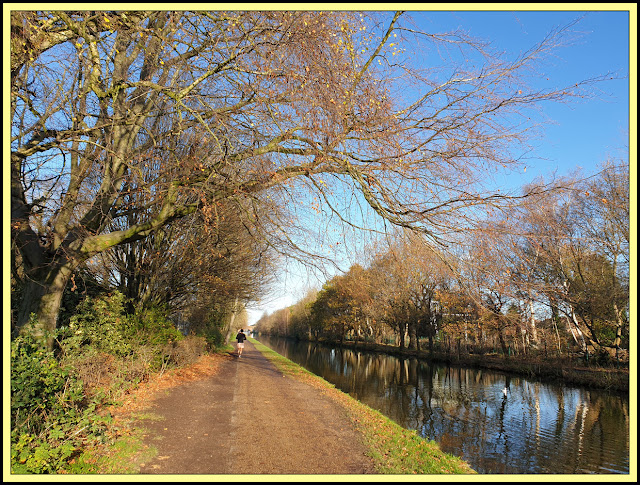 Above: The Bridgewater Canal in Timperley today (19 November).

Below: The Bridgewater Canal in Timperley on 11 November 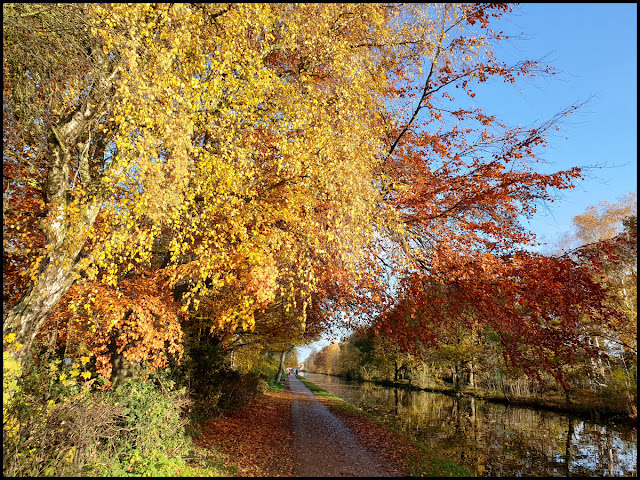 Posted by Phreerunner at 21:12 No comments:

An Isle of Skye View 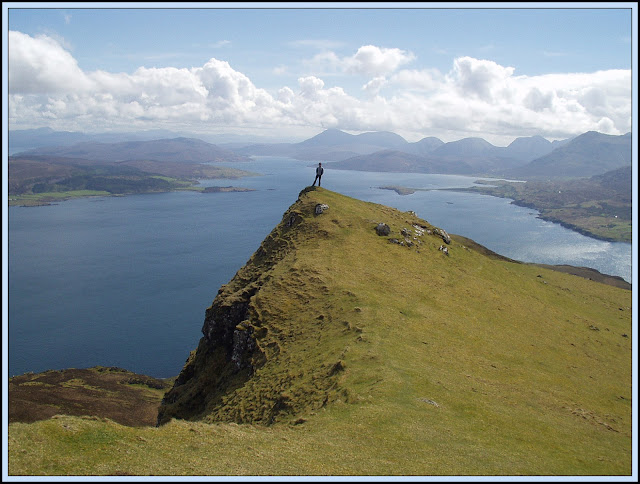 Today's picture is from another trip that I should write up properly. Sue is posing on a prominence near Portree, on the Isle of Skye, in April 2005.

That's all I have time for due to TGO Challenge vetting duties and a lost couple of hours due to an Anquet (mapping) file crashing. I should have learnt from past experiences to save such unstable files frequently, but at least this time I'm not faced with working through the night to reconstruct a report that's due for presentation tomorrow!

Posted by Phreerunner at 19:17 No comments:

Just a quick one today, from a memorable day that deserves a full write-up.

It was on 6 December 2003 that a large group of us ascended Helvellyn. The above picture was taken from the summit whilst bottles of champagne were emptied, and cake was consumed. 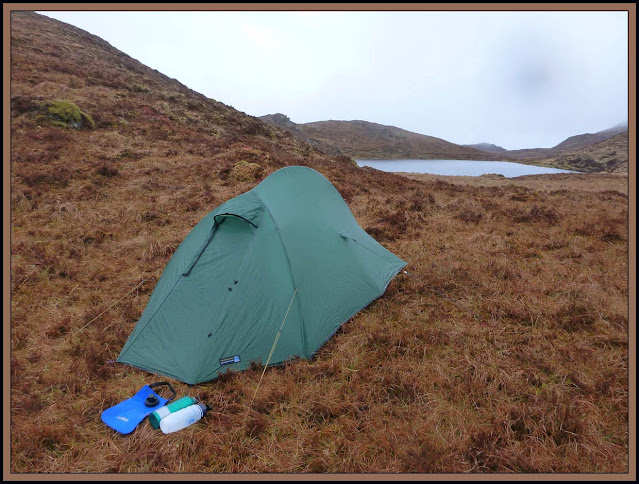 It's a while since I reported on No 41 in this series of postings. Keen observers may note an absence of wild camps in 2012. Not that Sue and I didn't do the Challenge that year. But with Sue having a shoulder problem that prevented her from wearing a rucksack, we managed the Challenge with my rucksack, and a bum bag for Sue. We stayed with friends or at B&Bs and had a very enjoyable crossing.

2013 saw me on my 7th Challenge, with Sue taking a year off in favour of a shorter 'bagging' trip.

I started from Plockton and on the first, fairly easy, day I muscled my heavy load over Auchtertyre Hill and reached a good spot by Loch nan Gillean at NG 922 355. I hadn't seen a single person since 10 am.

This was the first wild camp for a new tent (and still, seven years later, my newest tent), a Terra Nova Solar Competition 2.

The following morning the cloud was just about down to the 400 metre camping spot. 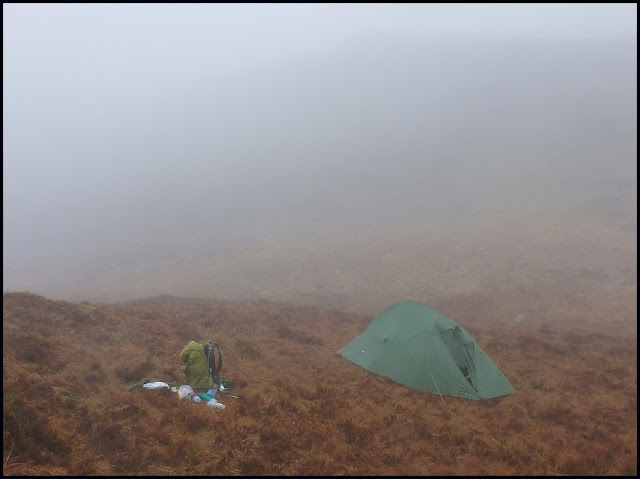 Posted by Phreerunner at 15:35 No comments: 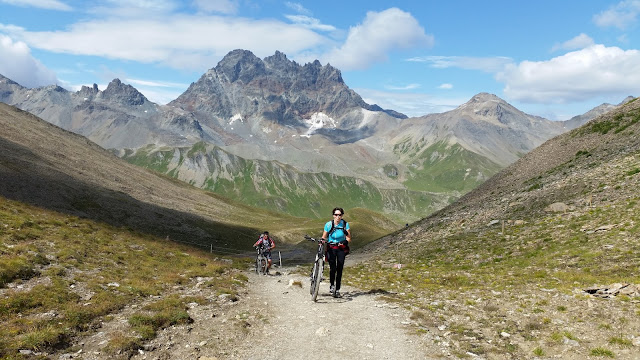 (not)parkrun, trying to reassemble study, lots of family 'Zooming', cooking lasagne and stew, receiving a TGO Challenger's route to vet... not terribly photogenic, so today's pictures are just a few random images that have been retained on my phone.

Above - on a TransAlp bike ride.

Below - a Lancashire rainbow.

Parkrunners, proud of having finished the previous Sunday's Manchester Marathon (2018). 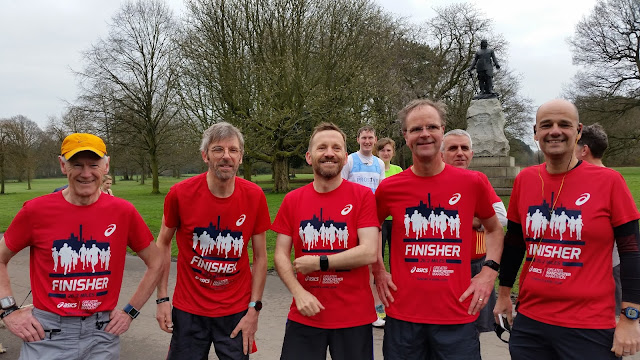 Eddie and Heather at Bridge of Gaur Guest House, whilst I was walking across Scotland on a TGO Challenge. I wonder how they are coping with Covid. 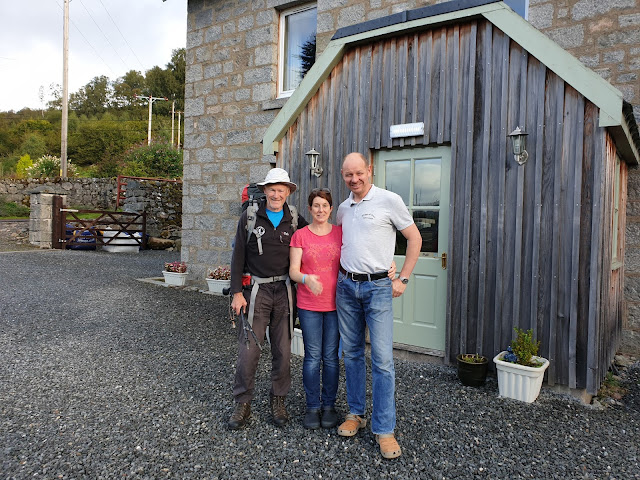 And finally, for today, a picture taken near home on the Trans Pennine Trail in summer. 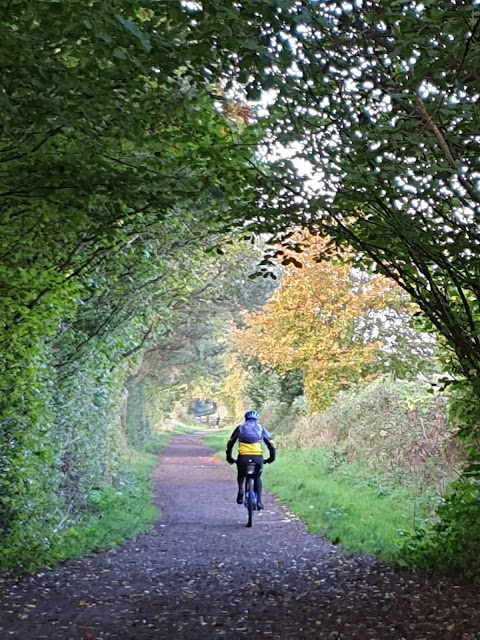 Have a good week, everyone.
Posted by Phreerunner at 19:15 3 comments: