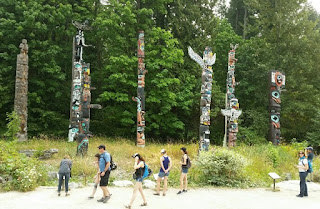 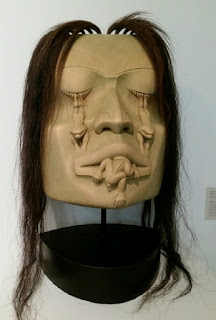 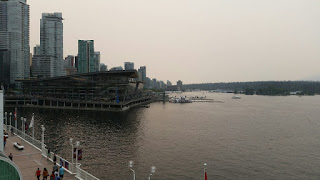 Shak kindly drove us into town from his house in Surrey, dropping us off at Coal Harbour Quay on the waterfront.

Bikes were hired and we enjoyed a leisurely ride around Stanley Park, then down the waterfront to the Science World building.

Some totem poles (top picture) were visited, as well as a rose garden and Beaver Lake, which is turning to forest. Song sparrows were hopping around in the undergrowth, and herons were positioned at strategic intervals along the rocky shore.

The sun glared at us through a haze of smoke, resulting in very poor conditions for photography.

After returning the bikes, we strolled up to the Bill Reid galley. Lots of interesting stuff from this First Nation sculptor. (See middle picture.)

We'd intended to walk up Grouse Mountain but decided to veto that plan due to the heavy smog. Instead we walked along the waterfront, from where the bottom picture was taken.

Shak collected us at 6 pm and dinner was at the the Washington Street restaurant in White Rock. Good seafood.

Just about finished the book I started on the plane journey - Dad You Suck, by Tim Dowling.
Posted by Phreerunner at 06:26 No comments: 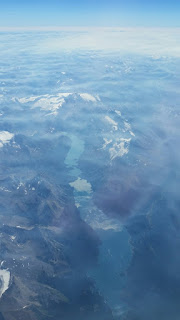 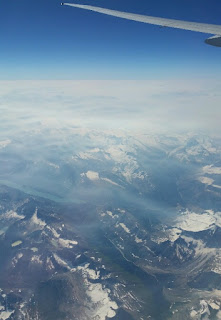 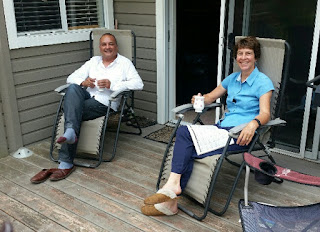 Up at 4.30 am to get the 6.45 shuttle from Manchester to Heathrow. Only just made it due to a security issue. The small knife that went all the way to Chile and back, was found secreted in my carry on bag. Oops!

Air Canada to Vancouver saw us in steerage, row 60 on the huge and completely full Boeing 777-300ER plane. 10.05 from London, arriving in Vancouver at about 11.30, a short flight apart from the 8 hour time difference.

We pass over the Rockies, shrouded in smoke from recent forest fires. At 21C, the temperature in Vancouver is said to be 13C lower than it would be without the smoke from the fires.

We arrive on time and are soon through customs and immigration - all done electronically here. We think our Vancouver host - Shakeel, one of Sue's work colleagues who happens to be staying at his house in Vancouver will meet us, but he's not there and we fail to contact him. Adjourn to Tim Hortons.

It turns out that we arranged with Shak that he would meet us in the pick up area, which he'd been circling around for an hour whilst we were waiting inside. Oops.

So we eventually reached today's destination - Shak's house in Surrey, where he and Sue are pictured. Later we enjoyed a meal with Shak's former team - Chrissie,  Debbie, Justin, Colin and Brad, at the Olive Garden in Langley.

... it's time for a beer. Cheers Shak, and thanks for everything.

Posted by Phreerunner at 04:33 No comments: 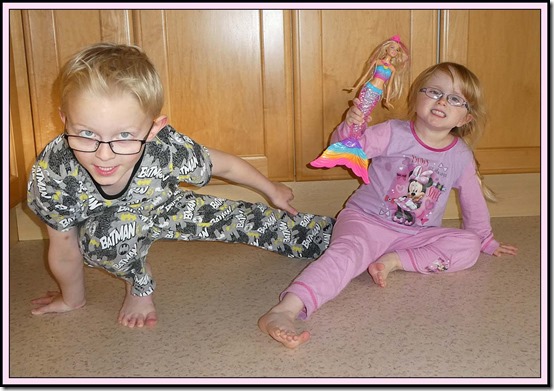 We were blessed with the presence of Batman and Mickey on Sunday afternoon. Batman won a game of boules, and Mickey went to see a hungry tiger.

They both ate lots of lasagne and somehow managed to get through the day without a stomach throwing contest.

My new TZ90 camera came out for the first time. The top picture used flash that I thought was a bit too bright, and the lower one used no flash and was a bit too dark. I can’t find a way of dimming the flash – maybe it automatically dims in auto mode and I’m wrong in thinking that it was too bright in the top photo, which admittedly looks better here than I first thought. 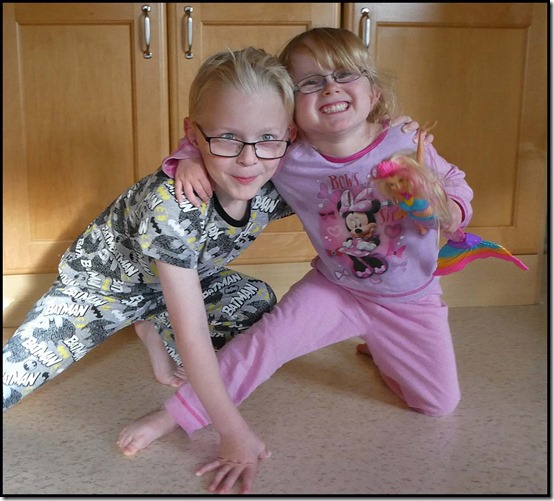 The camera should get a fair amount of use over the next few weeks, though this blog will be rationed to just two or three pictures a day taken with my Samsung S5 that has serious space issues. The ‘Perfect Angels’ won’t be seen until October. We hope they have a great summer holiday. 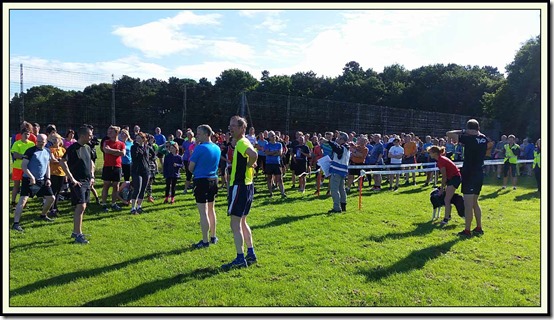 Dot may complain if I don’t report on this, our last parkrun in the UK for a couple of months.

The picture above shows run director Tris addressing the 269 starters and their dogs from an unusual position. The Wythenshawe Games were taking place at our usual starting point by Oliver Cromwell, so we reverted to the original start point and route near the running track, dating from 2011.

Paul and Jeanette Barber and I spent some time reminiscing about our favourite parkrun – the one that took place on 10 December 2011 with 23 participants and the slowest ‘first home’ time in history. Great results!

I think we’d need a big dump of snow and a ‘snowshoes only’ event to ‘beat’ Paul’s time that day. Whilst I expect some of the Canadian parkruns are snowshoe runs in the winter, it might stretch the management’s patience to arrange one at Wythenshawe. Worth a try though, if we get enough snow.

Sue didn’t manage a PB this week as she waited for a little boy we used to babysit. He’s nearly as tall as his dad now, but he may have been a bit miffed when Sue and Alastair ran off ahead of him down the home straight. 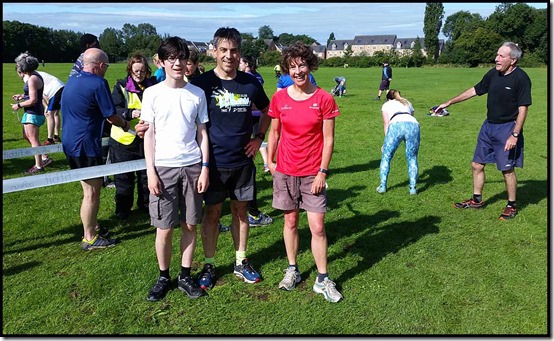 The full results are here.

Sadly we won’t be around for next week’s sixth birthday run, when everyone is supposed to turn up in beach gear. That should be interesting! So I brought a few brownies this week – they didn’t last long…

Posted by Phreerunner at 22:09 No comments:

Friday 28 July 2017 – An Evening Stroll from the Parkgate Inn 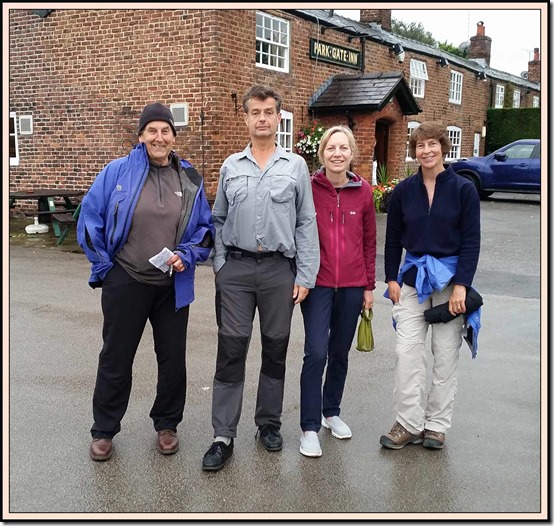 Having foregone the chance to enjoy a nice meal with some cool jazz played by Mike in a restaurant in Gatley, I’m afraid I wasn’t amenable to cancelling or postponing tonight’s ‘last of the summer’ evening walk in Deepest Cheshire, despite a drizzly afternoon. Anyway, that option had been rejected earlier on the grounds that there was no other mutually convenient date.

So the Famous Five all dutifully turned up at the Parkgate Inn in Over Peover. The cheap beer went down well and the start time of 7.30 drifted to 8 o’clock as we waited expectantly for others who didn’t arrive. Then we assembled for the above photo call after which Richard and Jenny went home.

That left Sue, Andrew and me to enjoy a route adapted by Andrew to be mudless and short. A very good route it was too.

A fair amount of wildlife was encountered, including this friendly red squirrel. 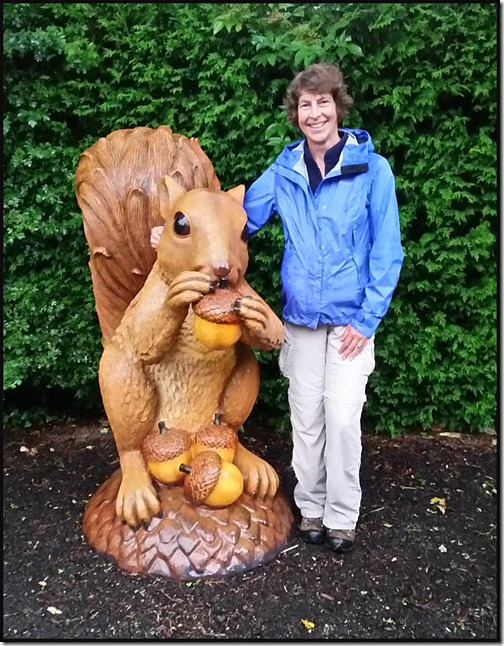 A giraffe looked on, intimating that she would like to give Andrew a hug. 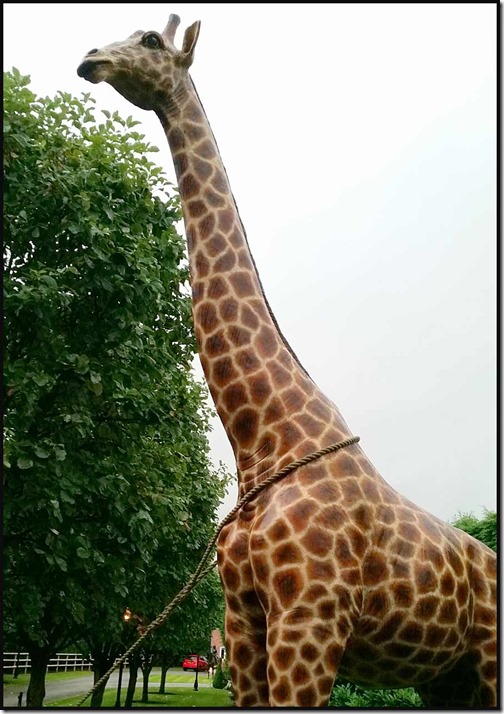 Meanwhile, a big pussycat was stalking an innocent looking horse that had been spooked by the appearance of a gorilla. The neatly mown lawn is testament to the bravest gardener in Deepest Cheshire. 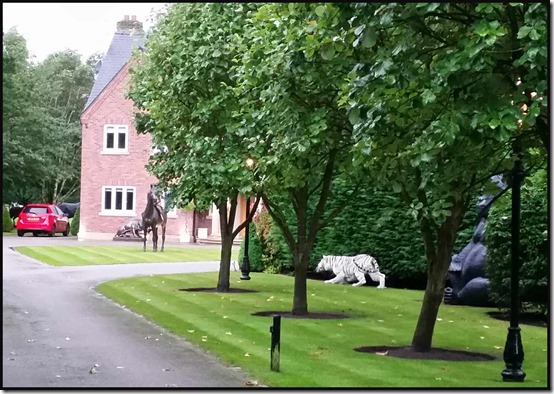 The real fun began a few minutes later near Merrydale Manor when the horse, frightened by the tiger that was being chased by the gorilla, disturbed a pair of love distracted Canada Geese. The geese flew off, but one of them flew through a barbed wire fence next to our path. It flapped frantically as we approached but it was well stuck and we felt would never have got free of its own accord.

Despite a dislike of these geese, we were obliged to come to the rescue. The frantic bird calmed completely as soon as Andrew wrapped it in his coat. He and Sue held it whilst I wrestled with the impaled wing. It refused to slide off the wire. After a few minutes we decided to rotate the bird through 360 degrees. Luckily we twisted it the right way and the wing eventually came free. The bird was then freed for another attempt at the fence, which this time just damaged a few more feathers. It could fly, but not very well, and at least it could join its friends. Amazingly it appeared to have managed not to evacuate its bowels during the stress of the rescue, much to Andrew’s relief!

It wasn’t far then to the Parkgate Inn, where the inmates were a little surprised to see us again, and were even more surprised to hear that we’d been for a walk in the drizzle when we could have been enjoying the cheap beer. 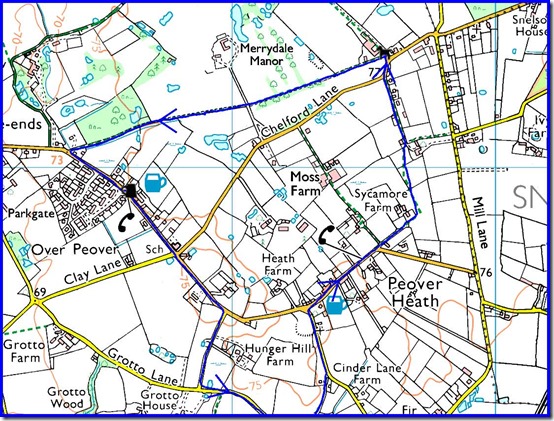