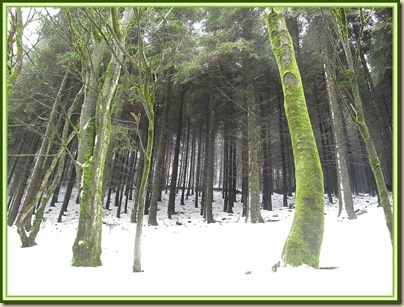 I think the only thing that got me out of bed on this rainy (the first for ages) morning was the fact that two rendezvous had been arranged.  It’s probably also the same reason that both John and Graham were on time, and cheerily set off with me from beside Ridgegate Reservoir, and along the snowy track that rises gently up Nessit Hill in Macclesfield Forest.

Don’t they look cheerful, despite the dark morning in wind and rain?  Even with the brightness of the snow, the automatic flash kicked in a lot today. 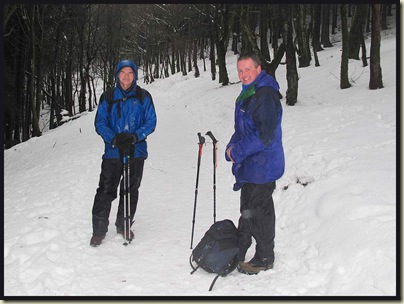 After we had passed through the trees and on to the open moor, we found ourselves in cloud, of varying density, almost all the way back to the cars.

Crampon prints looked incongruous in the now very soft snow.  We would have preferred it to be firmer, but the thaw had to start sometime.

Here (below), Graham and John pause briefly on the summit of Shutlingsloe, which had an Arctic Feel to it today, before slithering down its eastern flank towards Wildboarclough, where we met a 4 x 4 progressing slowly up a snow laden farm track.  On seeing us emerge from the cloud the driver shrugged, placed his vehicle into reverse, and drove backwards for half a mile down the difficult track…

…another failed postal delivery.  But we can vouch that he tried! 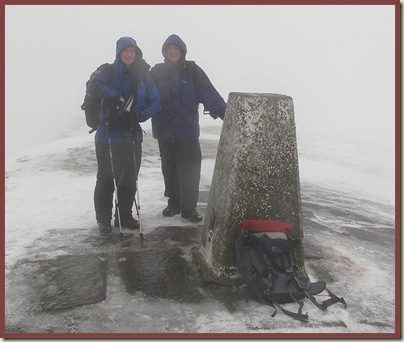 Certain readers will not appreciate this, but due to afternoon commitments we were forced to pass by the Crag Inn, in favour of a stop for tea and sandwiches in the snow, which had drifted. 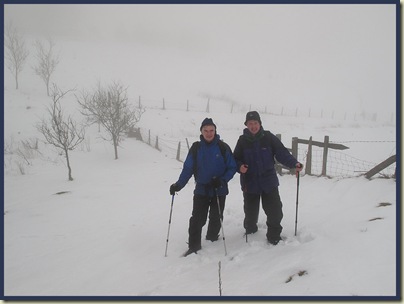 Eventually we started a descent down an ancient ‘holloway’, where John paused thoughtfully before negotiating some cornices. 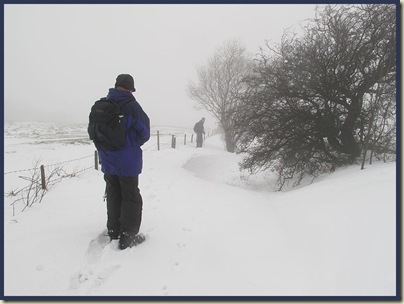 The Hanging Gate Inn, which sadly we had to pass due to pressing engagements, was surprisingly busy this Friday lunch time. 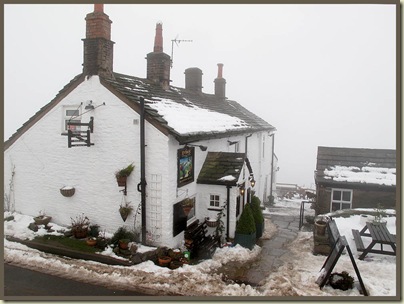 But we had to continue through deep snow, along a section of the Gritstone Trail, eventually emerging at the Leather’s Smithy (sadly no time to visit it) and Kate’s ponies.

A short stroll along the road concluded this excellent work out, albeit the 11 km with 500 metres ascent took half an hour longer than the customary 3 hours, due to having to battle our way through the snow. 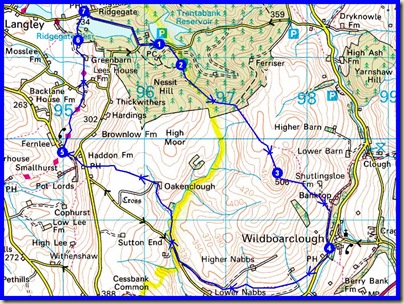 John has just delivered his pictures, so I may add more, but having already pressed the ‘publish’ button by mistake, I’d better press it again now.  Apologies to ‘Google readers’ who may also have seen the incomplete (now deleted) version of this posting. 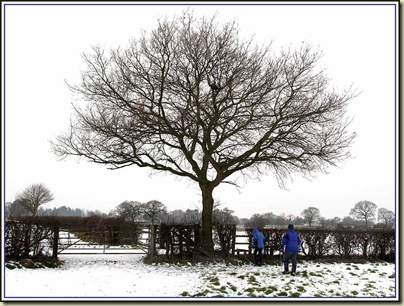 Since Saturday we have endured a slow thaw under heavy skies, with the ground in Timperley becoming slowly icier.  It has not been exactly photogenic.  A planned rendezvous with the Pie Man was abandoned due to his transport problems…

“If it takes me 2 hours to get from my front door to my garage, how long will it take me to reach our meeting point!”

Then, an enticing message arrived from Notchy:

“Can we tempt you out into Deepest Cheshire?
Here's what's on offer:
- Can't match the eye-popping beauty of last week, but at least our "slush" remains white(ish)
- Clear and treated roads all the way to our drive
- Coffee and biscuits at 10ish in warm kitchen
- Short circuit round the fields and lanes broken by a bar lunch
- Tea and cakes before heading home.”

So, by soon after 11 o’clock we had topped up with coffee and biscuits and were striding across frozen fields under a heavy, and rather loose, sky. 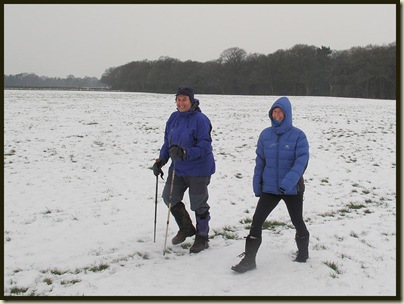 I stopped to say hello to these fine and friendly beasts. 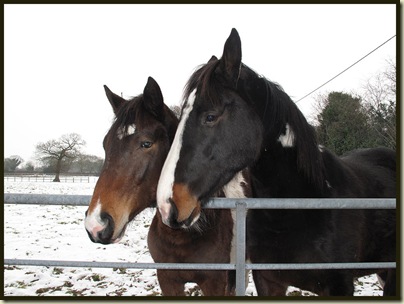 It was hard to keep pace with Andrew and Sue, who strode on with great purpose. 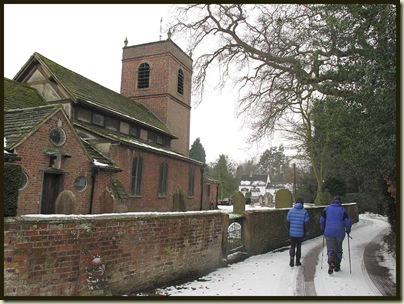 The local ploughmen may be somewhat rotund, if they regularly partake of the lunches on offer here, and the Hydes Original and Kodiak Gold also went down very well.  As did the roaring fire.

Sue is feeling a bit better these days, making a very slow recovery from her back condition and incurring a little less nerve pain than over past months. 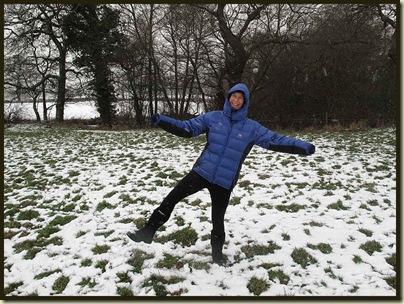 Andrew proudly pointed out his local hill, on private land – so we couldn’t ‘bag’ it – rising to the oxygen deprived height of 102 metres. 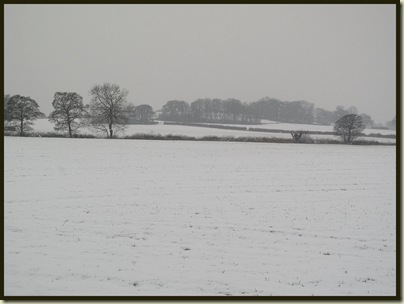 Soon afterwards, with the sky exhibiting increasing looseness and the surfaces re-whitening, we were tucking into a pot of tea and some very fruity cake back in the warmth of Lower Withington’s Aga Kitchen.

Then Sue and I adjourned to The Ashlea for a most pleasurable meal with some TGO Challengers (aka The Backpackers Club). 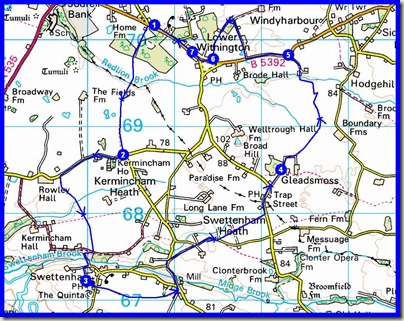 There are a few more images from today, here. 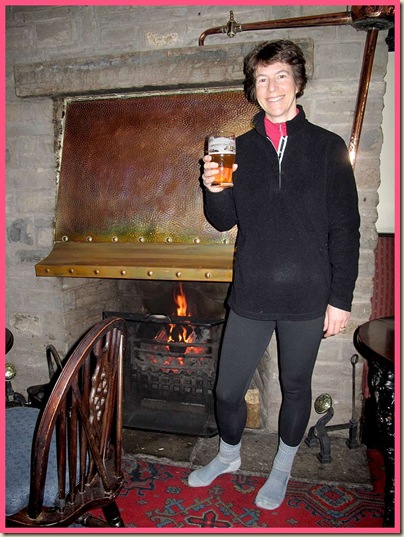 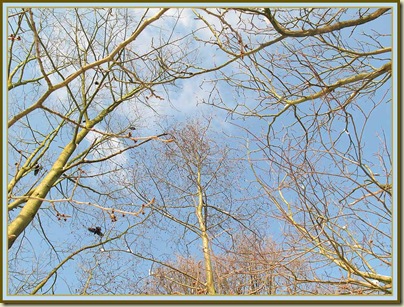 After an enjoyable first attempt at this sport, I headed along to Wythenshawe Park – very close to home – where Manchester and District Orienteering Club (MDOC) – were putting on another Saturday morning event suitable for beginners.

John Jocys, esteemed fellow resident of Timperley, and veteran of several TGO Challenges and numerous orienteering events, joined me on this occasion, and we set off together on Part 1 of a two part ‘Sprint’ event. 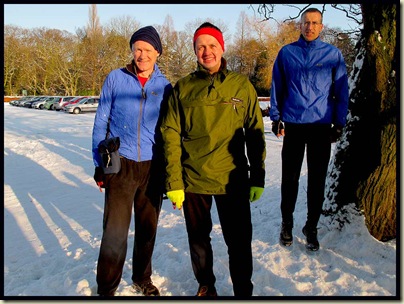 We had to ‘dibb’ 13 controls over a snowy 3 km course.  Here’s John, being ‘downloaded’ by Sue Birkinshaw.  He claims the sweatiness, on this cold day, was due to his mounting sense of terror and despondency as he traipsed through the snow looking for control number 12, having been long abandoned by his mate. 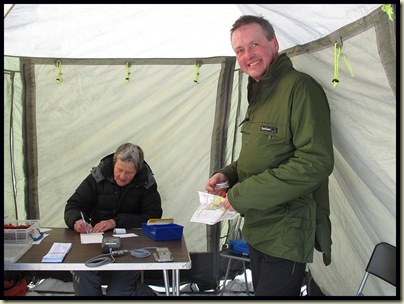 The second part was over a further 3.5 km route, with 13 more controls.  We started in the exact order in which we’d finished the  first part, with the same time differences.  So I thought I was lucky to be starting just 6 seconds after Alice, who had ‘Orienteer’ written on her back, so she must know what she’s doing (I thought).  I tracked her to the second control and without really checking the map, on through a dense thicket to the third.  Or so I thought, until she appeared looking a bit flustered and headed off in the opposite direction through deep undergrowth.  She’d fooled herself and me.  So I went back to the path and navigated my own way round, losing about 3 minutes to fleet of foot teenager Alice.  Failing to locate control number 7 until a chasing group caught up with me didn’t help.  It was good fun though, despite the long wait for John to finish. 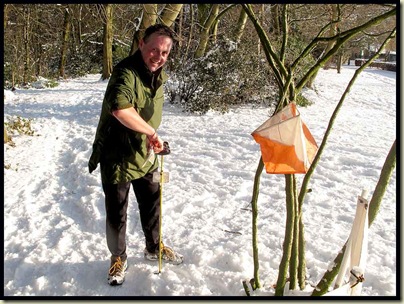 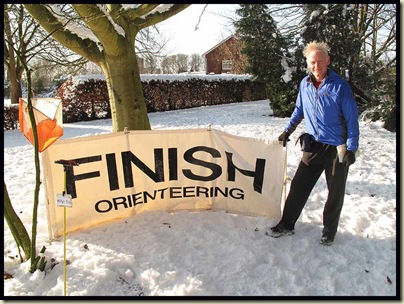 21 people started the sprint, so I was delighted to come in 11th place, second (out of three - 10th, 11th and 12th) in the ‘M60’ class. I’m even more pleased now that I’ve browsed the MDOC website and discovered that Alice, who skillfully shook me off by leading me completely the wrong way, has represented England and that various of the other people who finished ahead seem to have done quite well in an array of British championship events.

Great fun, rounded off with a welcome pint with John at the Gardeners Arms.