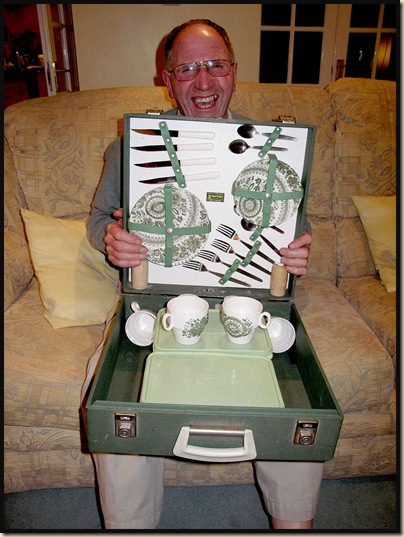 Last (long) weekend Sue and I embarked on a tour, visiting six households and enjoying a variety of diversions.

We started by pootling down to Half Moon, near Exeter, where Trevor proudly displayed his Brexton picnic kit.  I don’t really know what brought this on, but Robert’s ears may have been burning.

Robert is an occasional ‘outdoors blogger’.  In between times he earns a living.  Will this link result in an increase in Robert’s visitor count from 00000181, I wonder?

Sue and I enjoyed a day at Ashburton Cookery School, where Phil assisted in the concoction of some delicious fayre. 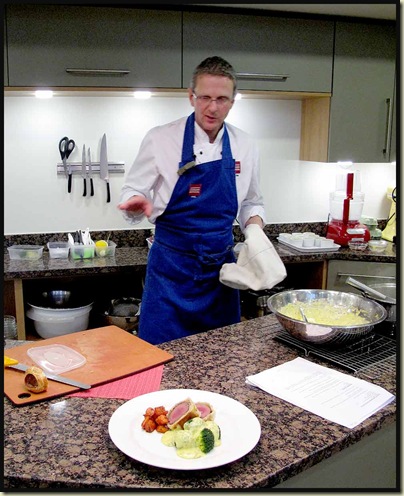 I’ll be posting a separate report on the day’s activities, after which we returned with well filled ‘doggie bags’ to share later with Maureen and Trevor.

As previously indicated, I had been requisitioned to take a photo before leaving Half Moon.  This is it. 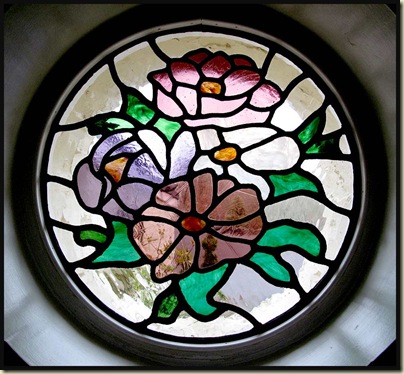 Back in 1998, Robert and Lyn learnt how to make stained glass windows, mirrors, etc.  Despite their website, they seem to be too busy doing other things these days.  The window above is perfect for its location – I don’t think R and L have seen it in situ (hence the photo).

Leaving Half Moon until the day when we’ve saved up for another cookery course, we headed in to the ancient city of Exeter.

The cathedral on this site was founded in 1050.  Whilst some of the original Norman construction survives, most of the building comprises a major rebuild, in Decorated Gothic style, carried out between around 1270 and 1350. 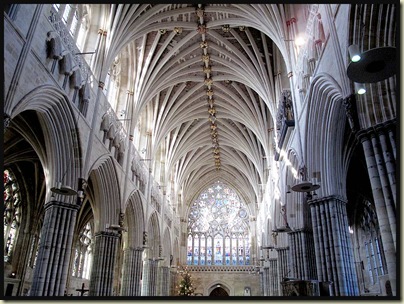 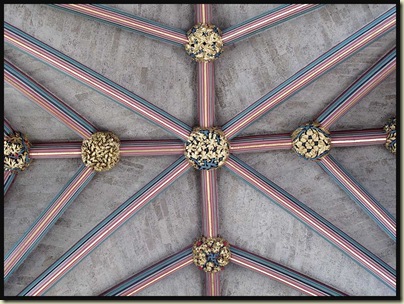 We rushed off for lunch with Colin, Liz and Simon, in exchange for some CCS and a lesson on how to play Yatzy.  This proved more confusing than expected, as their version - ‘Yahtzee’ – sported rather different rules to the ones with which we are familiar!

After this delightful interlude we pushed on to visit Ralph and Gillian in Crewkerne, where they share their home with Jack and two elderly cats.  Everyone here seems long-lived.  Jack, the parrot, is 44, for example, and may outlast us all. 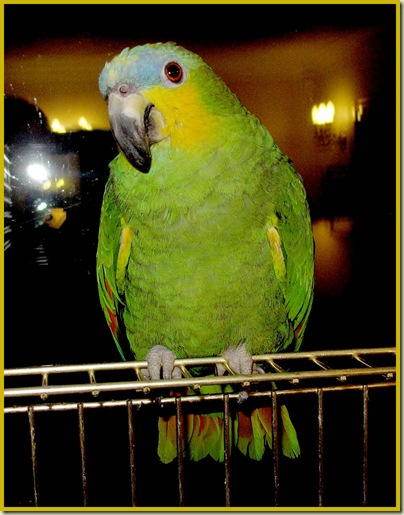 We gorged ourselves last night, again.  A delicious pork roast.  I think we may be over-eating!

Gillian, pictured below with Sue’s dad, dug out loads of old photos that will keep Sue entertained for weeks. 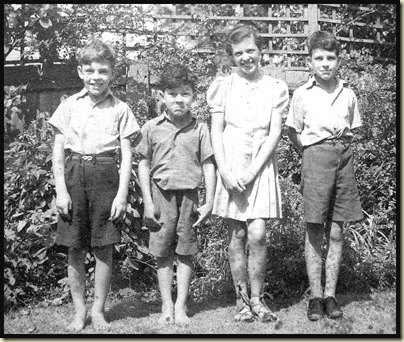 A short drive found us slithering (literally – black ice) over the Mendips to Blagdon, where our culinary delights continued with one of Lyn and Simon’s excellent roast chicken dinners.

We had to walk it off!  Simon still had a rugby induced hangover to dispose of.  Luckily the weather was perfect for a walk, and the Mendip Hills beckoned.  Ben and Polly enjoyed their fifth birthday a few days ago, and they managed the 5km walk completely under their own steam.  It may be the longest walk they have done. 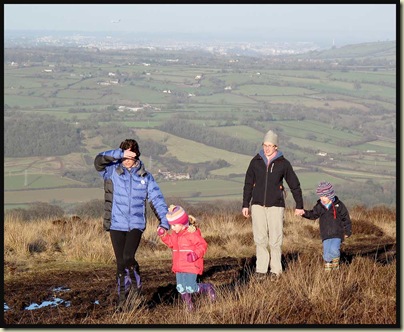 And possibly their first summit – we reached the trig point at Beacon Batch – 325 metres – with expansive views towards Bristol and the mouth of the River Severn.

I didn’t realise it at the time, but this is indeed a ‘proper’ summit, with a relative height of more than 500 feet compared with its nearest neighbour, making it a ‘Marilyn’.  Perhaps a start to Ben and Polly’s ‘bagging’ careers. 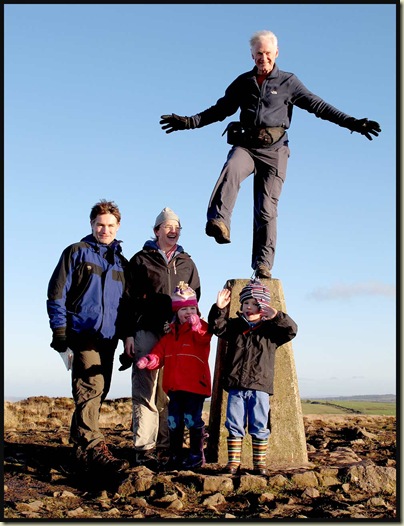 From the trig point we entered a deep groove inhabited by mountain bikes, leading to Black Down, from where we did indeed proceed ‘down’ a pleasant path, eventually contouring east to regain the car park near Ellick Farm shortly before dusk. 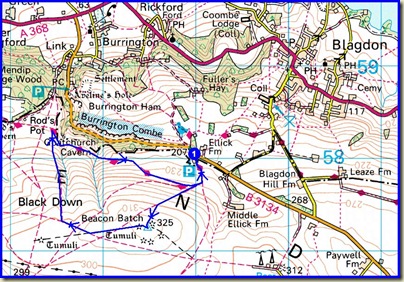 Our tour concluded with a gentle drive home, punctuated by visits to Solihull and Eccleshall, on a dull day.

Manchester has remained dull all week – there’s been no incentive to go walking.  Instead, I visited ‘town’ for lunch with Graeme, whose professional advice I’ve appreciated over the past 30+ years.  He’s working part time now and may well appear shortly on one of our walks.

The building below brings back memories.  I spent a few months here during the demise of Lewis’s, the department store.  It was hard to sell, having the greatest square footage of any retail property in Manchester. 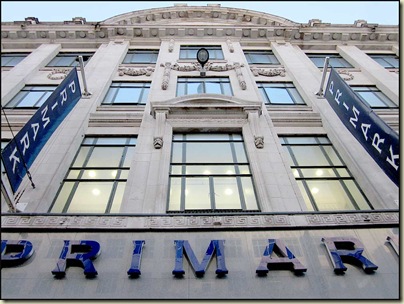 Back in Timperley – the ice on the canal still hadn’t all melted despite the warm weather.  Note the icy sheen on the picture below… 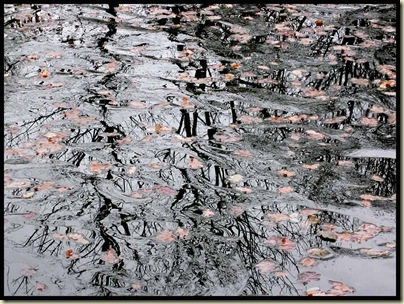 The ice has all gone now, as I write on Saturday afternoon.

For those who may be interested, there’s a 60 image slide show of our tour, here. 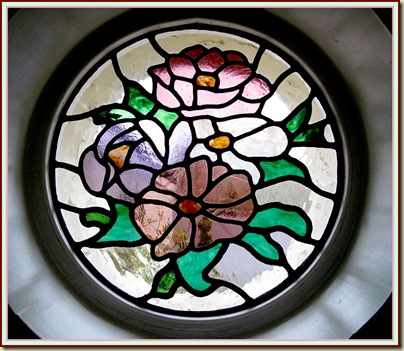 As promised, and not to be confused with other nearby windows that will feature on the next posting, here’s Robert’s Window, snugly installed at Half Moon.

It really does look very professional.

Posted by Phreerunner at 22:49 No comments: 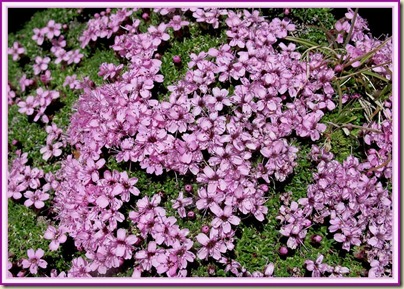 This ubiquitous mat-forming plant decorates short turf, damp rocks and screes across all of the European Alpine regions, up to heights of around 3700 metres.

It’s even to be found here in the UK, but not usually in such lavish quantities.

This particular specimen was snapped on 9 July 2010 near Rifugio Serristori in the Stelvio National Park.

Posted by Phreerunner at 23:37 No comments:

Lost in the Alps? 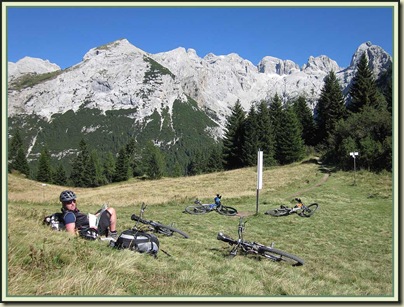 Lost on our TransAlp bike ride?  No, surely not!

Here, I think, Markus studies the rare luxury of a map of our route, whilst relaxing on 1 September 2010 at the 1836 metre high point of Passo Bregn del Ors, above Madonna di Campiglio, in the Brenta Dolomites.

Perhaps he is also puzzling ‘how come we have four bikes between the two of us’?

Posted by Phreerunner at 23:49 No comments:

King of the Alps (Eritrichium nanum) 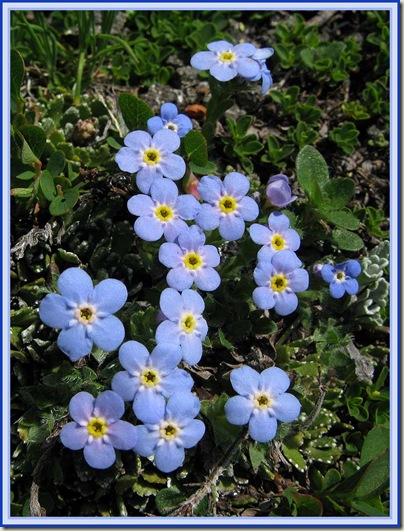 This iconic flower grows in low, dense cushions, like a dwarf forget-me-not.  It’s not all that common, but does live in gay abandon along the length of the Porta Vescovo ridge, high above Arabba in the Italian Dolomites.

There are great views towards the Marmolada massif from here, but that’s for another day. 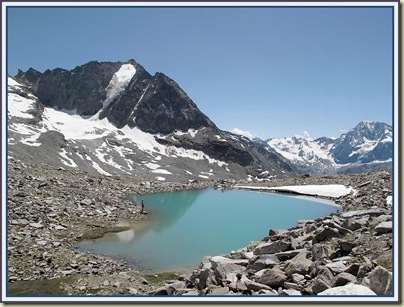 On 9 July 2010 Sue and I drove round to Solda (Sulden) and walked up to Rifugio Serristori (aka Dusseldofe Hutte) at 2724 metres.

From there we continued to this small unnamed lake at 2886 metres.  A calm, relaxing spot with a magnificent mountain outlook.

We commend anyone to pay a visit to the Stelvio National Park.