It's two weeks since I got out for a walk.  That was Wadi Digla in Egypt, now seemingly in the distant past.  So today, after enjoying muddling through some TGO Challenge images for Tim and Kate, ordering spare batteries for the G10 (2 for £12, if they make it from Hong Kong), whetting the appetite for next year's TGO Challenge via perusal of the Message Board and an exchange of emails with an illustrious vetter, and enjoying some sounds of Elvis Costello, I set off in an 11 km arc in order to reach our local shops.

It had to be along the towpath of the Bridgewater Canal, of course - pretty much deserted today.  I did notice that the black-headed gulls have returned to harass the mallards and moorhens, and a cormorant was flying up and down the canal yesterday 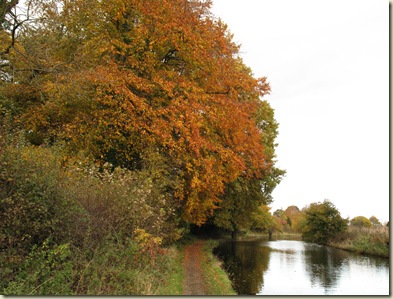 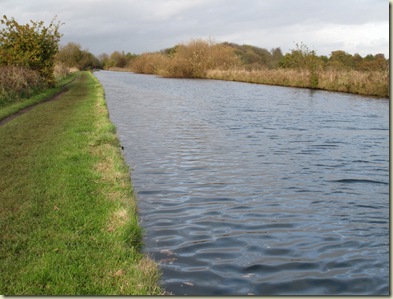 On leaving the canal at Little Bollington, an old cobbled track leads to welcome refreshment.  (Alan Sloman would not have forgiven me for walking past!) Then I discovered where everyone (if not at work) was enjoying the afternoon - they were ogling the fallow deer at Dunham Massey. I joined them. 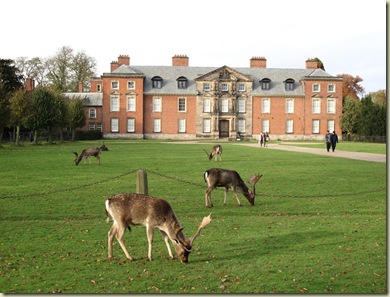 On the other side of the park the last lap of this stroll was through a local golf course, where the trees were in fine autumnal fettle, but the scene will change greatly, I suspect, when this warm, calm weather comes to an end. 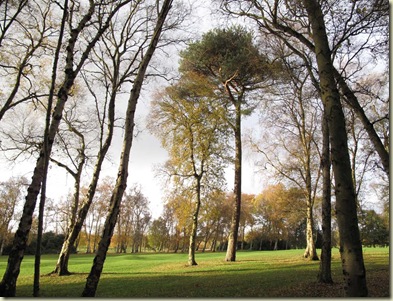 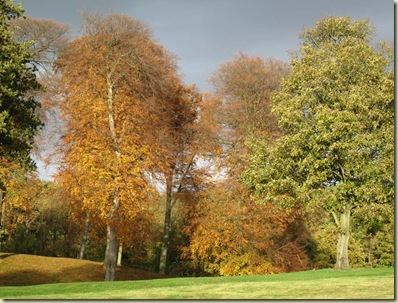 Finally, our favourite restaurant is rumoured to have re-opened.  I checked it out.  Correct.  We can eat well again at this excellent spot, if the new chef turns out to be as good as his reputation, and if Sue goes out and does lots more work! 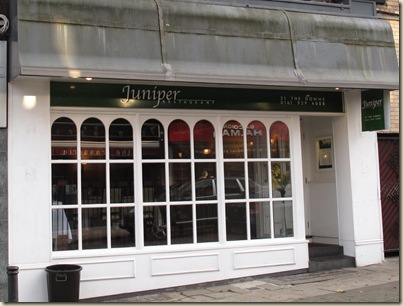 Oh, and we made two batches of this slurry.  We promise that it will look different tomorrow! 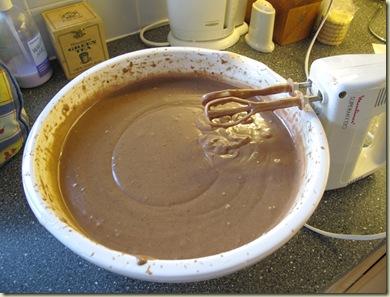 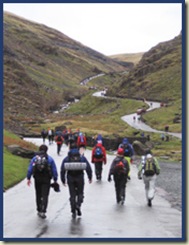 The OMM (formerly KIMM - Karrimor International Mountain Marathon) took place this year whilst we were in Egypt.  We caught sight of what appeared to be a debacle on the news in our hotel in Alexandria.

Much has already been written about what really happened on the OMM website and forums, but I know a number of the readers of this blog rely on other media for their information.

Two friends of ours, Bob and Rose of backpackinglight.co.uk, took part in the event.  This is what Bob wrote on their home page after the event:

What Was All The Fuss About?

The BBC (and other news media) should be ashamed of themselves following the inaccurate and irresponsible reporting of the recent OMM event which took place in Borrowdale, Cumbria. Over 2000 competitors ‘chose’ to go on the hills and enter the race, all were ‘equipped’ with the right gear to suit the occasion. How this turned into ‘1700 Marathon Runners stranded or need to be rescued’ I have no idea.
All the news reports we’ve watched or read since our return clearly show a total disregard for the facts, no clear knowledge of how the event was run, what it entailed, and certainly very little experience of being in those conditions and relying on yourself to either ‘self rescue’ (if required), or complete the event. A quick visit to The OMM forum would answer most of these questions.
We spent five and a half hours in these very, very tough conditions, picked up as many points as we could, and got to the camp only to be told it was cancelled. We then walked for another hour or more to the top of Honister Pass in equally terrible head wind and wet conditions (probably worse to be truthful) only to be told this too was closed. So then we had to walk back down the river/road to the cowshed to join some 500 other people and spend a very comfortable night munching on our rations, tucked up nice and warm in the kit we all carried with us.
To clarify; we saw no one (a) complain, (b) in danger, (c) requiring rescue or (d) needing first aid. We did see competitors helping each other across swollen rivers, checking each other were okay and voluntarily retiring as they had reached their own personal limit. The OMM is a tough event, it isn’t suitable for media desk jockies who can’t manage the stairs to the BBC gym. There was one serious injury of a broken ankle, the rest was various stages of hypothermia, after 8 hours in those conditions, we ALL had mild hypothermia, BUT we all KNEW what to do about it.
There are many complaints being made to the BBC today and I am certainly one of the complainants. Their irresponsible reporting has caused unnecessary distress and concern to many loved ones of those taking part, when very few, if any, people were in danger. The biggest problem was the flooded cars on our return to HQ, but ‘hey, that’s life’!
I’m working on a podcast of the event, our performance, the gear and to get the story behind the story, so make sure you stayed tuned for that one!!
Update: THIS is the original video clip the BBC adapted to tell their story!
All the best
Bob and Rose 27/10/08

Since then Richard Askwith, a fell runner who was perplexed by the story being portrayed by the media, has attempted to redress the balance with this pertinent article in The Independent.

Bob himself has in his persona as 'Podcast Bob' produced two Podcasts.  The first covers his and Rose's experience of this OMM:

The second covers the aftermath:

Whilst my readers may not be interested in the fine detail of all this, it does provide a disturbing example of irresponsible reporting.  Bob tells me that subtle changes have been made to the BBC's on-line reports following the furore from those who took part.

I thought you ought to know about it.

The photo is courtesy of Bob and Rose, and shows walkers returning to their cars over Honister Pass the morning after the event was cancelled; many of them no doubt would have been happy to continue and were extremely disappointed that the organisers had felt it necessary to cancel the event the previous day.

We are delighted that a quick email to Uncle Roger on our return home yesterday yielded the desired (and incredibly quick) response.

Yes, we will be there on the Challenge next year for another stroll across Scotland.  This time it's Sue's turn to plot a route between some of her unclimbed Munros, with the aid of Anquet's magic blue lines.  No doubt she will be supplying copious amounts of CCS at designated points both on summits and in valleys.

We hope to renew acquaintances and make many more new friends on this great event. 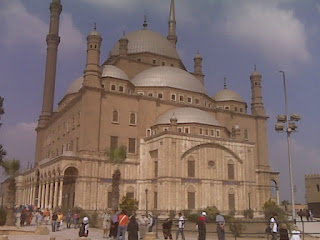 Our sojourn in Egypt drew to a close today with visits to Cairo's Citadel, featuring the great Mosque of Mohammed Ali (pictured above), with its needle like minarets, then several further mosques before enjoying an excellent lunch at Mena House Hotel. 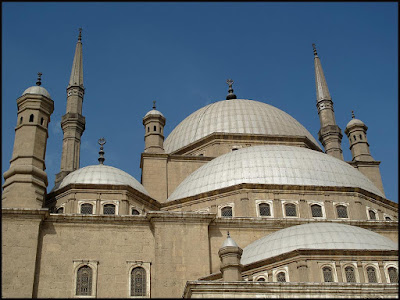 Here's another image of the Citadel (taken with a proper camera rather than with the Blackberry 'phone), begun in C12th and used as a fortified royal residence. More recently it was associated with one Mohammed Ali, who in 1811 feasted 470 leading Mamlukes in the palace, bade them farewell with honours, and had them ambushed nearby. Only one Mamluke survived...by not attending the feast.
This ornate clock, in the Mohammed Ali Mosque, was given by France's King Louis Philippe, in exchange for the obelisk in the Place de la Concorde. It has never worked. 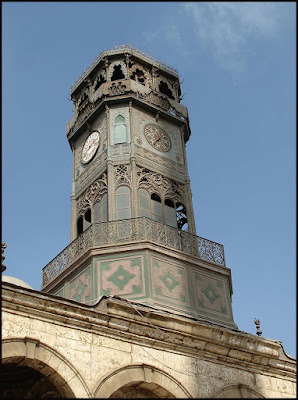 Here's some typically ornate moulding from one of the mosques - there are rather a lot around here, but by now we were becoming a little 'mosqued out'! 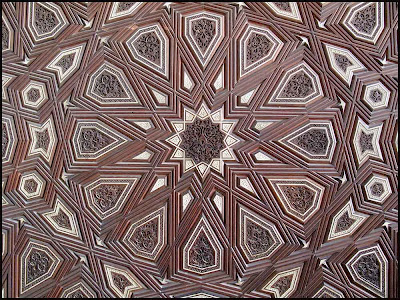 The Mena House Hotel has a fine view to the famed Pyramids of Giza - Cheops and Chephren - which we proceeded to visit. Down an ancient causeway lies the (small in comparison but still most impressive) Sphinx, a few metres beyond which a Kentucky Fried Chicken outlet marks the start of the vast city of Cairo. Here's the Sphinx, with the Pyramid of Chephren behind, here clearly sporting its rare intact summit. Its base originally covered 215 square metres, and its weight is estimated at 4,883,000 tons. 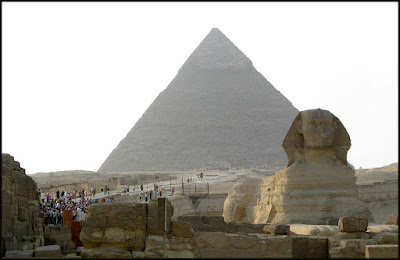 It didn't take long to walk around the left hand side of the Pyramid of Chephren, from where, with the sun now behind us, there was a fine view of this pyramid, with the Great Pyramid of Cheops and the city of Cairo behind. 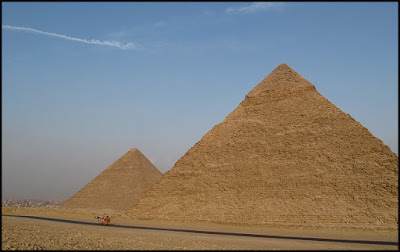 I've not mentioned the propensity of the Egyptians to hassle us into buying things. We expected that sort of hassle and we were not 'disappointed'. We put up with it, smiling at and shaking hands with people before firmly telling them to "Go Away". The Pyramids of Giza site was the worst place to visit in this respect, but I did manage this snap of a retreating camel man after he had been duly banished from hassling us. 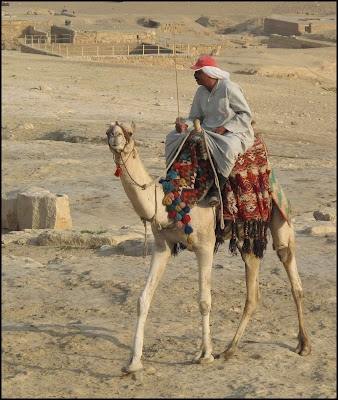 The congested streets led, as always, back to Maadi and a nice restaurant at which to celebrate David's birthday. Despite David's absence due to 'Cairo Belly' the rest of us enjoyed the occasion, and we were provided with birthday cake and music to enjoy the moment. Just as well that nobody asked us "which one of you is David, then?"

We returned to base for on-line check-ins and other essential holiday admin. We return home tomorrow, whilst Bill, Alison, Ruth and David have a cruise on the Nile to go to. It's just not fair!