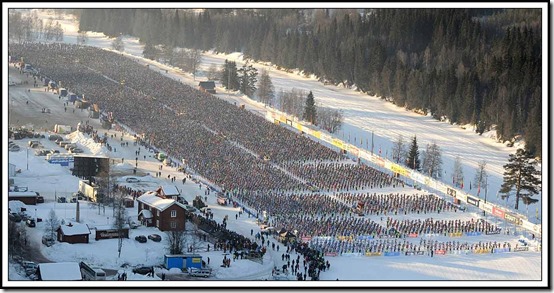 After we’d skied the Tartu Ski Marathon, on which I’ve previously reported, one of our number, Shane, headed off to ski the much longer Vasaloppet in Sweden. Wikipedia asserts:

"The Vasa Race" is an annual long distance cross-country ski race held on the first Sunday of March. The 90 km (56 mi) course starts in the village of Sälen and ends in the town of Mora in northwestern Dalarna, Sweden. It is the oldest and longest cross-country ski race in the world as well as the one with the highest number of participants.

The race was inspired by a notable journey made by King Gustav Vasa when he was fleeing from Christian II's soldiers in 1520. The modern competition started in 1922 and it has been a part of the Worldloppet events since 1978.

Shane took the trouble to write a report on his experience of competing in the race with a group of Estonians organised by Jüri, so rather than lose that report in the depths of our computer’s hard drive, I’ve decided to reproduce his report by way of a point of reference, with Shane’s approval, here:

I'm at Stockholm airport and my flight is delayed, so plenty of time to write you my "Vasa Report".

As you've read from Andy's mail, I got through it in one piece, though currently am unable to lift my arms above my head (not sure why I'd want to do that anyway).

It was an early start on race day, the bus was to leave at 5.15am for the start, Jüri suggested breakfast at 4am. I woke up at 3.45am  and went down to breakfast to find a couple of the Estonians already eating! We were staying about 20min by bus from the start, but it took an hour or so on race morning due to traffic jams. I got to my pen at 6.30am, 90min before the start and there were already about 20 rows of skis laid out! I was in pen 10, the very last one, which was about 500m from the start line. (The start is pictured above – Ed)

Being in the last pen is a significant disadvantage as there is a major bottleneck up the first hill after about 1km and around 15min had passed before I reached the start line. The first 3km was a slow shuffle, sometimes just standing on the hill for a few minutes at a time. It took me an hour to complete that first 3km; Andy would have hated it!! Jüri, who skis at similar pace to me, started from pen 7 and was at the first checkpoint in 1h 30, it took me 2h. As you can imagine, it's quite hard shuffling up a long, steepish hill, often having to pull poles from under the skis of those behind you and finding a space for your skis with every step. Anyway things got more civilised soon after that.

Conditions were pretty good. It had snowed a bit the day before and was about minus 8°C at the start and not forecast to rise above about minus 3°C. There were some open areas beside lakes when the wind made it feel much colder. The tracks were pretty good and held reasonably well given the number of skiers before me. The course was about 6-8 tracks wide most of the way (the start was about 30 tracks wide!!). Being able to change tracks often to find the best track is a big advantage and not one of my strengths. Between the first checkpoint (at 11km) and the finish I passed over a thousand people; that could have been many more if I was better at track changing. There was more uphill than I had thought from looking at the profile and a couple of tricky downhills. I was involved in a bit of a pile up on one downhill when someone fell just in front of me, not sure how but I didn't hurt anything!

There was a food station about every 10km or so, these were congested and slow to get through (unless you didn't want any food or drink). I only skied through one without stopping. I must have eaten at least 10 "Vasaloppet buns" and drunk as many cups of blueberry soup.

Overall it was great fun, a friendly and brilliantly organised event; I enjoyed every minute (except perhaps the shuffle up the first hill). I guess my goal was to finish in daylight, which would have been sub 10 hours. It got dark when I had about 4-5km to go, but there were floodlights for the last few km, so quite fun really!

Anyway I finished in 10h 25min and no complaints as it was a great experience. No medal though, as only those who finish in under the winning time +50% get one. I would definitely recommend it and I'm sure to return to do it again. Jüri finished in 9h 15, the best of our group was 4h 40 and the winning time was 3h 57 (that’s three hours fifty seven minutes!!).

The expo was massive, loads of gear for sale, food freebies, etc. It was at the finish; we were there on Friday and there was lots going on and a great atmosphere as there was the relay race that day, with quite a crowd watching the finishing straight.

The Estonian group seemed like a nice bunch and though it was a bit difficult to get any conversation to start, I'd chatted to several of them by the end of the trip. (I think some of them spoke very little English), Jüri tried his best to look after me.
Anyway, the in flight wifi has just come on so I will stop waffling, send this now and maybe try and get some sleep.

Best of luck to the Engadineurs of the group next weekend. 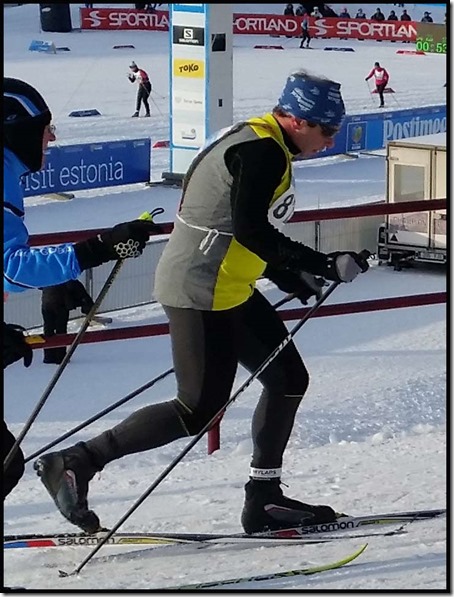 Well done, Shane, that’s a considerable achievement, and thanks for agreeing to my publishing this. Our French friends, Pierre, Yolaine and Joel, who are good skiers, took 11 hours 41 minutes to do this race in 2016. Here’s their ‘report’:

“To answer to Martin, the only thing that we have taken easy on that journey is the beer at the end of the race. No in fact it was quite hard, because when you are at 30km from the beginning and already skiing for 4 hours, it is very difficult to imagine that you need to ski 60km more. But we have done it. We have skied all 3 together all along the race that was a good point. Curiously, the last 20km were the easiest, because we knew it was possible to finish before the time limitations, because the race profile was better and because we were helped by the Swedish "bravo" all along the track. It has been another marvellous adventure for us.”

I wonder whether Jenny & Co will report back on their ‘Engadine Experience’?

Stop Press: Jenny plus two others from the Tartu trip report succeeded in the Engadine. Jenny comments:

‘It was a great event and we had fantastic weather, a bit busy in some places going up the hills, although Trevor assures me that all I needed to do was double pole up the middle of the herringboning queues!’

Posted by Phreerunner at 11:51 No comments: 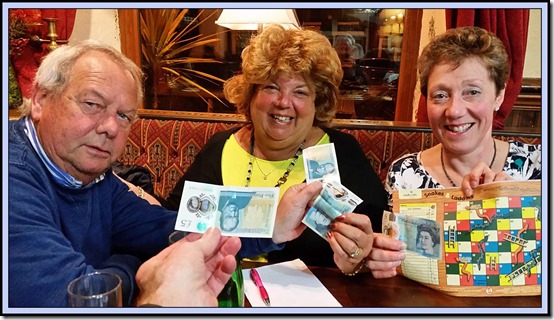 Well, that was a surprise!

After their ‘reserves’ finishing at the bottom of the pile last week, ‘The San Marinos’ found themselves coming about 12th out of 14 teams in last night’s quiz. But much to our surprise we managed to avoid enough pitfalls (including both the quiz master’s and Bev’s assertion that ‘Rubber Soul’ was a Rolling Stones album!) to arrive at the winning square in the ‘Snakes and Ladders’ contest involving the final 25 questions. It was our 13th and last correct answer that got us there.

Posted by Phreerunner at 13:59 No comments:

An evening stroll, and a parkrun 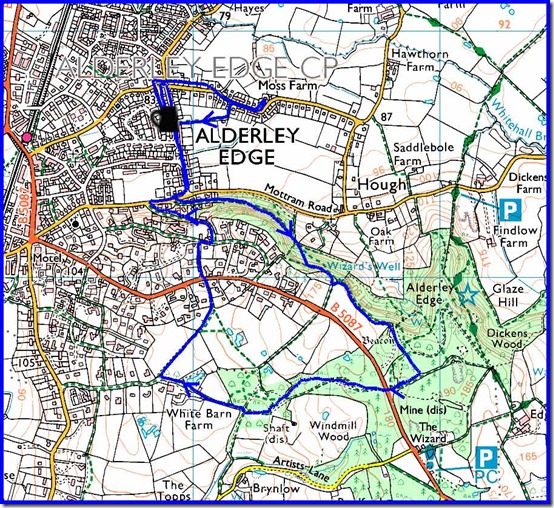 Friday night saw three of us on the last of our current series of evening walks, from the Drum and Monkey pub in Alderley Edge. Despite the full moon I failed to take any pictures that can be reproduced here, and there are already loads of pictures of Alderley Edge on these pages, so I’ll make do with a picture of our short route, above, from which you might notice that I set off in the wrong direction and had to backtrack. Andrew and Sue had wondered about the direction I was taking, but had said nothing, assuming it to be a new route.

There was lots of deep mud and light pollution from highly illuminated properties on the loop to the south of the B5087, but we managed to get round without any further injuries.

Perhaps our next evening walk will be in daylight?…

Saturday morning found us cycling to Wythenshawe parkrun, before heading up to Bacup for an afternoon with Jessica.

My new Salomon Speedcross 4 shoes were the envy of the crowd! 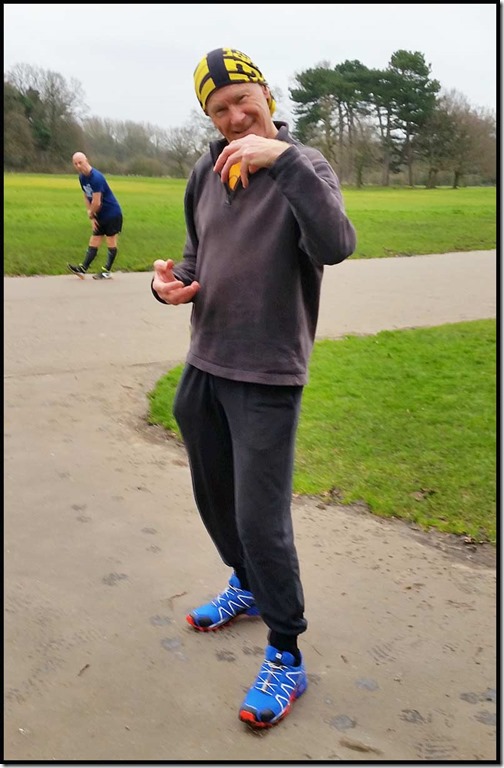 The shoes performed well, bringing me home just in front of the running legend known as Ken Burgess, who struggled round despite a knee problem. 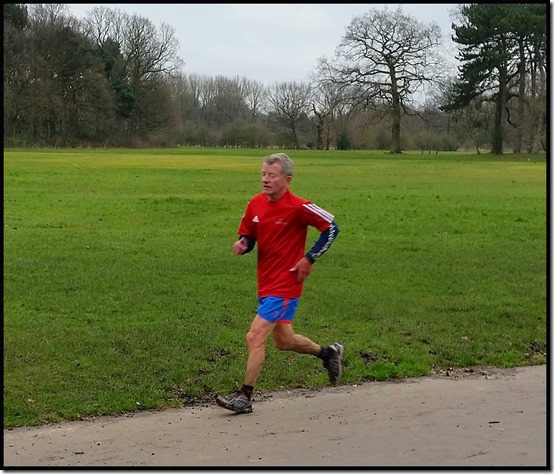 Sue managed to finish in a little over 30 minutes, though she couldn’t hold off a determined looking Ron in the finishing straight. Ron’s in training for a marathon, and close to his PB despite the slow course and conditions. 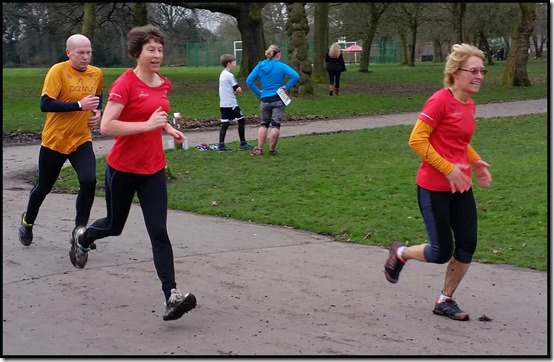 Here’s the melee at the finish. Can you spot Sue? 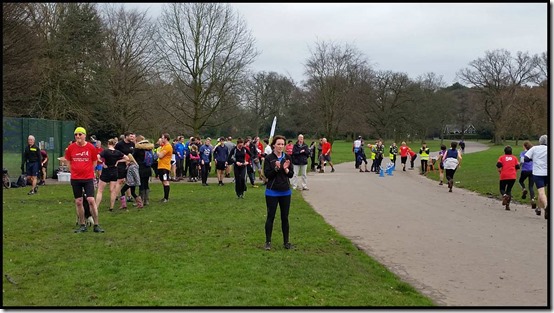 As usual, we adjourned for coffees at the courtyard tea room, where we were joined by an assortment of ‘cripples’. (Jeanette – can’t run but can cycle; Cary – can’t lift settees without damaging his back.)

Today’s course was a wet weather one that is generally slower, for various reasons, than the normal course. It’s known as the ‘Bowtie’ course. I wonder why.

Results are here. Thanks to Paul for keeping me company around the first lap before speeding into the distance. My new shoes worked well, and I suffered none of the usual slippage – I’d have gone faster if I didn’t have to hold one arm as if it is in a sling as a result of the shoulder damaged in Estonia; but it is slowly getting better.

Posted by Phreerunner at 11:15 No comments: