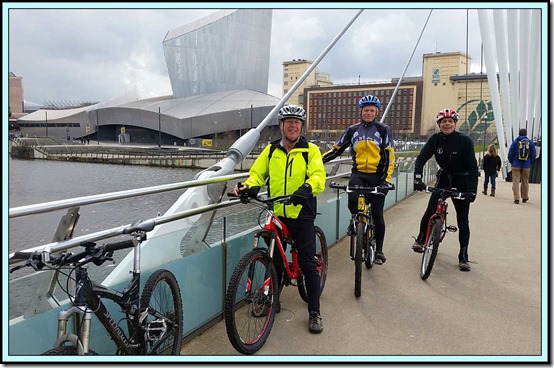 In order to attend last night’s gathering of ex UMIST friends, Ken had arrived a day early for the Calderdale Hike. We wanted to get out, but not too energetically, so a local bike ride seemed appropriate.

In Dave’s case it wasn’t very local, as he drove down from Tarleton to join us. Paul was at a loose end and a ten minute bike ride away.

So the four of us enjoyed coffee and cake before setting off down the canal towpath to Sale. Nobody was enticed by my promise of fresh fish from Fleetwood at Daryll’s emporium just round the corner (sorry Daz) but Paul entertained us by allowing his tyre to explode. A new inner tube was inserted, but it protruded through a hole in the tyre.

We were in no hurry, so returned to Timperley, where I knew there was a spare tyre lurking in Ken’s bedroom. It had been there for years. Now it’s on Paul’s bike.

We set off again, passing through Sale and Stretford and turning right at Water’s Meet to head past Old Trafford football stadium. Leaving the canal at Throstle Nest Bridge, we turned sharp left and headed along the banks of the Manchester Ship Canal, past the ugly tower of the War Museum, to cross the canal by the BBC’s buildings at Salford Quays.

The rest of the team posed on the bridge (top photo), then Ken dashed down to the Blue Peter sign with a request that he be pictured there. Request granted. 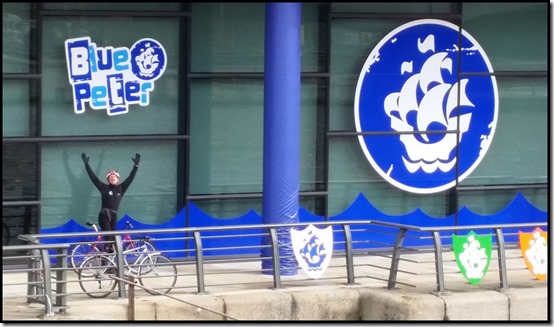 Cycleways and a short road section took us through Eccles to the swing bridge at Barton, from where we returned beside the Bridgewater Canal to Stretford. Here, the Trans Pennine Trail (TPT) passes under the canal. It was blocked by work on the path, but after a bit of faffing we found a way around the obstacle.

Mud was encountered from now on. Quite a lot of it. After crossing the Mersey we found that the path had been diverted around Banky Meadow – a longer but more scenic route than the old one. It was now well past 1 pm and we were all hungry. Paul’s tyre incident was blamed. So we pottered on along the TPT to join the track of the now defunct Altrincham to Lymm (and beyond) railway line, which thankfully was drier than the muddy paths around Carrington Moss.

Paul redeemed himself by leading us down School Lane to Dunham Town and the delights of the Lavender Barn Tea Room. Two huge pots of tea and some nice sandwiches, not to mention the Victoria sponge and other cakes, went down a treat. 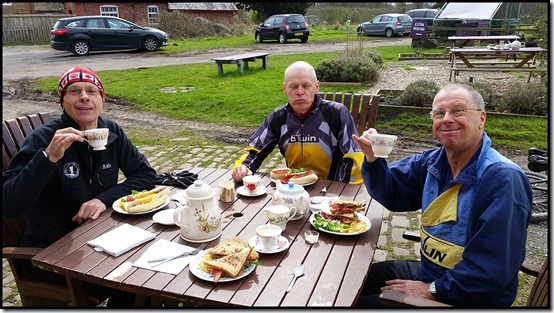 Then we pootled off down the muddy canal towpath. Just a short muddy stretch as we picked up the newly  relaid section before passing the Bay Malton and heading back to base.

I reckon it was a leisurely 46 km, with not a lot of ascent despite Anquet (my mapping software) guessing at over 300 metres. If you click on the image you’ll see the route better. 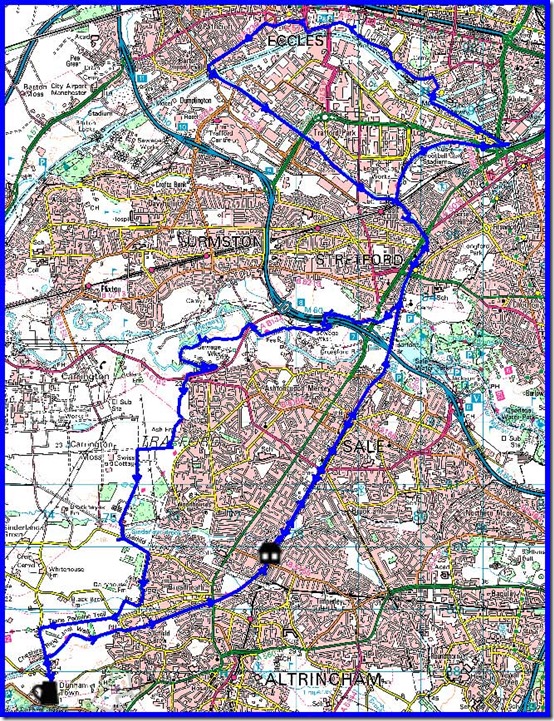 An excellent and very sociable little outing. Thanks for your company folks.

Cleaning the bikes took some time…

Posted by Phreerunner at 22:10 No comments:

Graffiti from the Southern Half (17) 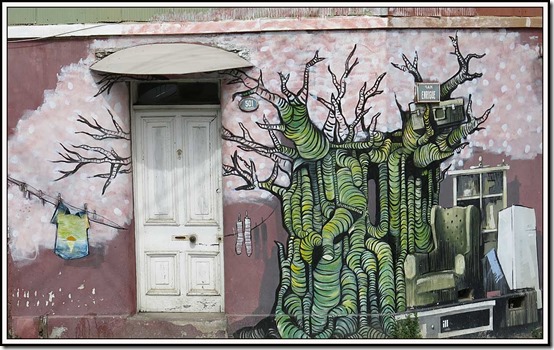 It has been a dull week in Timperley. We’ve woken to wet surfaces and rain every morning until today.

I should perhaps have taken some photos last night when 17 ex UMIST folk congregated for a meal at the Midland Hotel in Marple Bridge, but I was too busy chatting. Most of us were fairly local but we rarely meet up these days. Ken had travelled from Ottawa and Gary had just landed from Hawaii, having spent most of this year in New Zealand.

I mentioned both Pat’s books and my books to a few people. It’s strange (to me) that people seem quite happy to spend £5 on a cheesecake that will last them 5 minutes, but not on a book that would provide several hours of enjoyment. 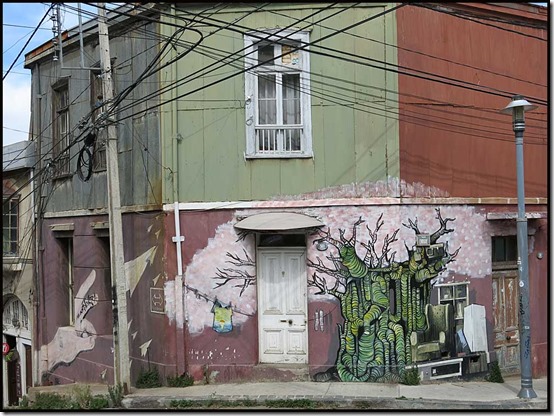 Posted by Phreerunner at 09:10 No comments:

Graffiti from the Southern Half (16) 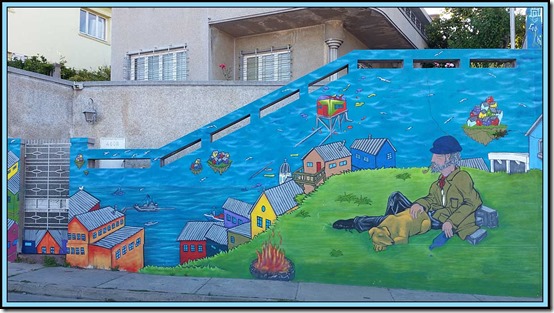 ‘At the seaside’ in Valparaiso. 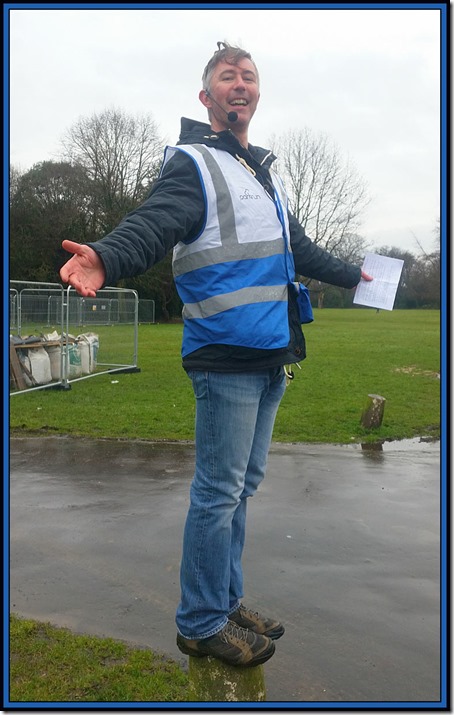 Well, a day at home on a Saturday always involves a visit to a parkrun, usually – as today – at Wythenshawe.

Paul was today’s run director, leaving Andy (below) to enjoy a fast jog despite a delicate calf muscle. 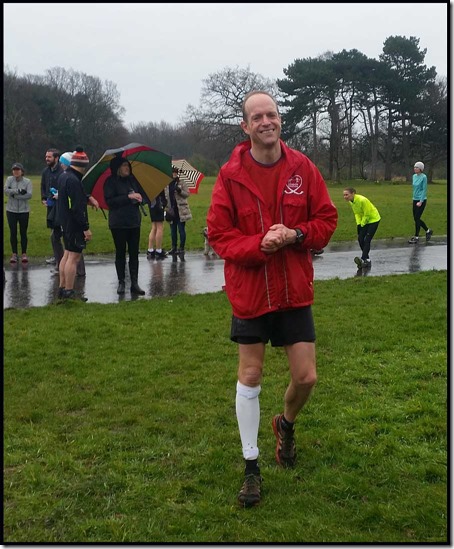 Nobody seemed particularly bothered by the light rain, though Andy W, below on the left, looks as if he would have benefited from having my heated gloves. 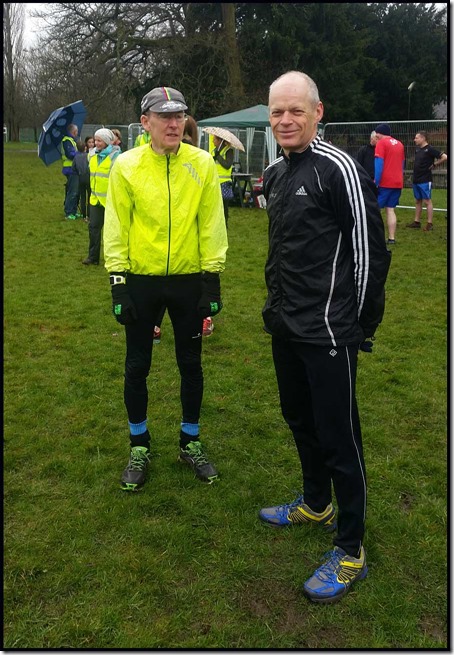 There were only 160 runners today, fewer than usual because of the rain, and the fact that many regulars would be taking part in the Wilmslow Half Marathon the following day. So they took a day off. 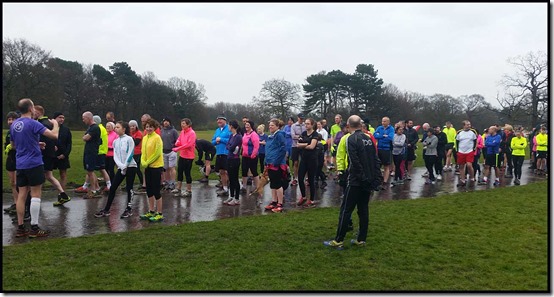 The hall had a little more scaffolding, but no workers today. 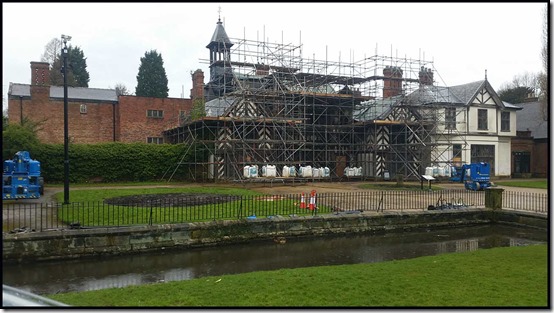 After getting home we were soon visited by Bill, on a tour of the UK from his Aberdeen base. Here’s the picture taken for his ‘Road Tour’ album as he disappeared back to a caravan site in Knutsford. It was good to see you, Bill. 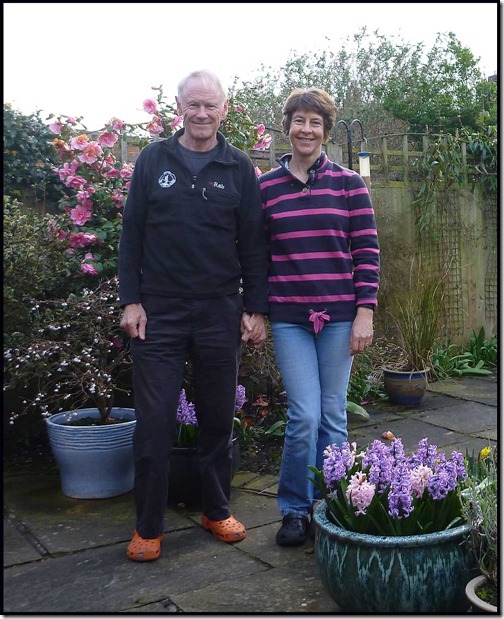 Posted by Phreerunner at 14:14 No comments: 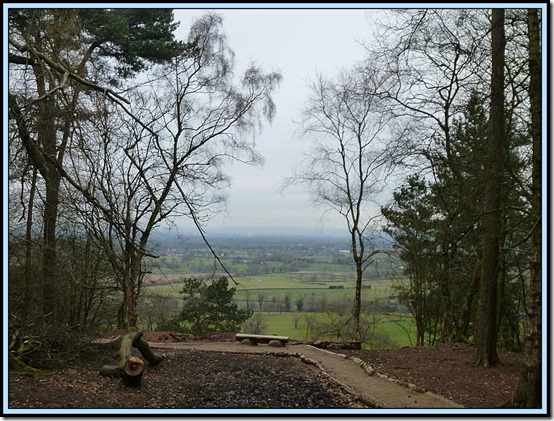 For the first of a short series of morning walks, Paul and Andrew turned up to join me at the Wizard car park on a dull, cool, dry day.

Our route was vaguely familiar, resembling some of those taken on previous visits, though there are many options hereabouts. We set off on a newly constructed National Trust path to the north, passing the viewpoint shown above and soon reaching another viewpoint at a barren area where the old mine entrance is fenced off. 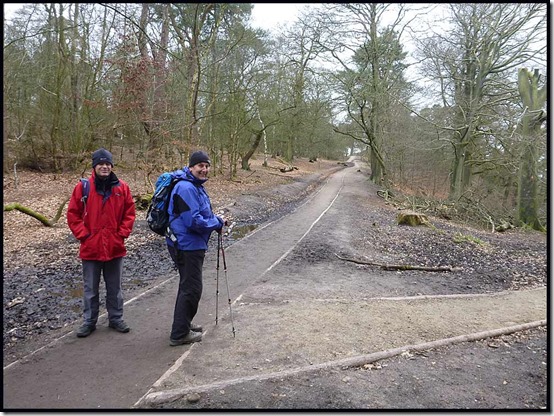 On a good day there are wide ranging views over Cheshire and towards Manchester. There’s an Armada Beacon near here, built on top of a Bronze Age ‘bowl barrow’ or burial mound.

During the time of the Spanish Armada and undoubtedly hundreds of years before this time, the Edge had very few trees and was predominantly heathland, making it a perfect vantage point.

It is said that in 1588 it took 12 hours for the news that the Spanish Armada had been sighted to travel from the south coast of England all the way to York. 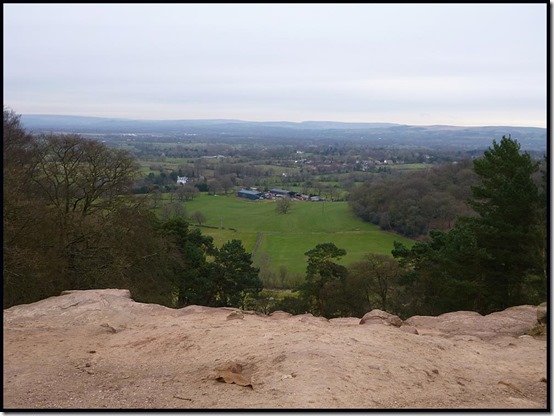 The area is riddled with mines and quarries. On our way down to Findlow Farm we passed a long abandoned quarry, the path drawing us around its eastern edge rather than my planned route around the other side. One of a number of ‘meanders’ away from today’s planned route. 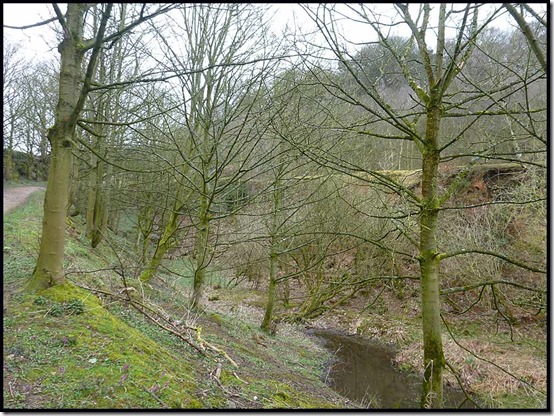 The path to Whitehall Brook was a trifle muddy, but feet remained dry today despite the use of trail shoes. 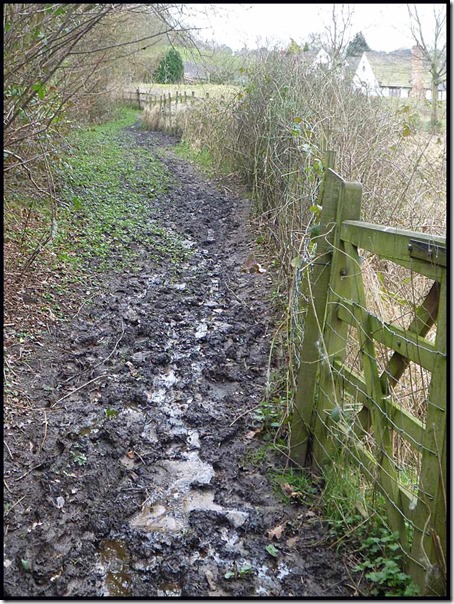 Beyond the posh exterior of Faulkner’s (not a) Farm, we reached Mottram Bridge and the Bollin Valley Way (BVW). The last couple of times I was here, the path was blocked by a landslip, but now a diversionary path has been built, so next time I’ll try the BVW route towards Prestbury. You can just see the new path in the distance to the right of the river. 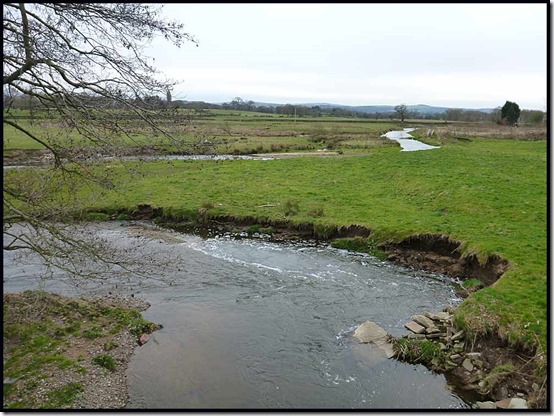 Soon afterwards, at Top o’ th’ Hill, some red ‘Pedestrians’ signs directed us into a building site to a dead end by a fence where our 1:25,000 map showed a public footpath. After a debate with the site manager we concluded that the footpath must have been officially diverted to make room for the privacy of one Tom O’Connor, of O’Connor Utilities Ltd, in what in a couple of years time will be his fancy new mansion, no doubt mimicking the ‘footprint’ of the old farm and its outbuildings. We appear to have arrived from a direction where the signage and explanation for the closed path were inadequate. 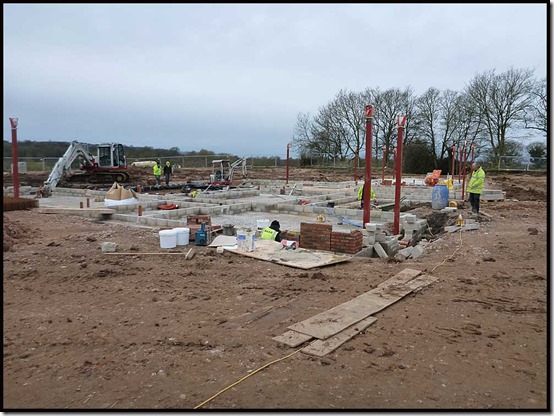 After eventually finding our way around the obstruction, we continued to a quiet spot for tea and cake, before re-joining the BVW at a footbridge over the river, immediately leaving that route to cross a golf course on a path leading to Woodside Farm, also a construction site, but unlike the O’Connor construction, this farm was being renovated rather than being replaced.

A ‘path’ leading south was full of horses that had churned it into a deep quagmire, so nobody objected when I decided to introduce an extra ‘meander’ that took us down the driveway to the farm, past vibrant daffodils in Smithy Lane. 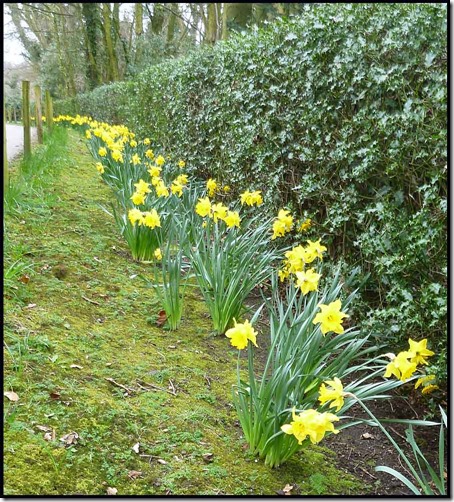 Beyond the Bull’s Head, a pleasant path took us past Brook House Farm and Hunter’s Pool, to re-join our planned route along the North Cheshire Way, which we followed up Daniel Hill (pictured below) and past Edge House Farm (another construction site) to the Edge and the Wizard Car Park. 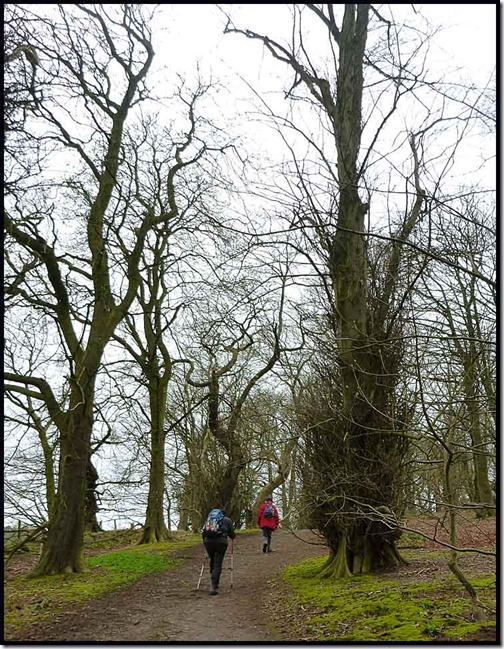 The Wizard tea shop was closed for renovation (if the National Trust can find a local builder who isn’t ripping down a farmhouse to supplant it with a mansion), so we headed into Alderley Edge for coffees, with bagels and cream cheese at a circular café that apparently used to be part of a motor dealership near the station. It was surprisingly good. 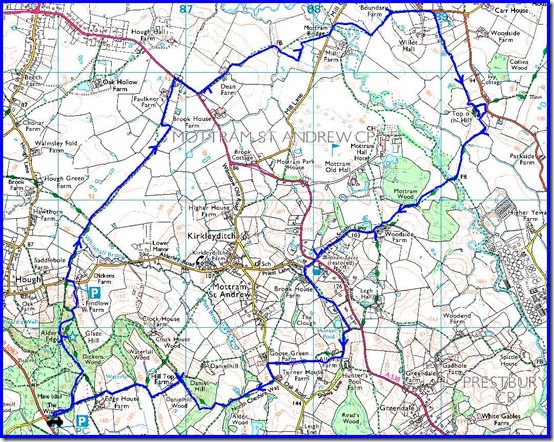 Thanks to Paul and Andrew for their company today on this pleasant stroll.

The three other morning walks currently planned are detailed below. All are welcome.

Posted by Phreerunner at 08:55 No comments: