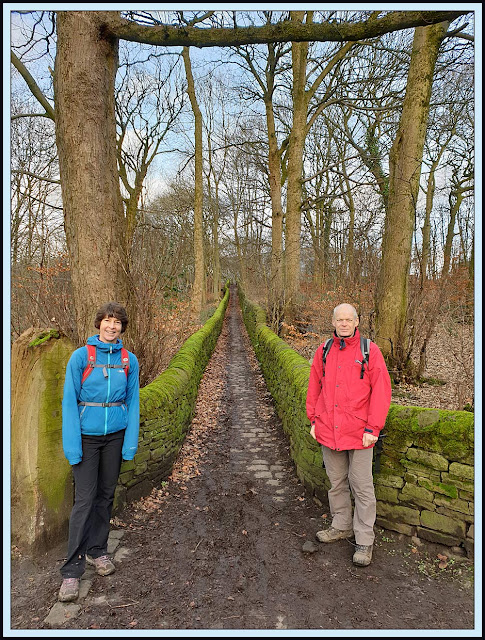 I did this walk on my own back in September, reporting on it here, where you'll find a bit more greenery in the pictures, and a map.
Today's outing was for the benefit of Sue and Paul, who I think were as surprised as me to discover that there's a completely off-road route through the suburbs of Greater Manchester between these two towns, thanks largely to the River Tame, and the canal engineers from over 200 years ago.
We travelled by train from Navigation Road, and it took a few minutes to extricate ourselves from Stockport Town Centre, where the frog pictured in September by the railway station has been removed. We soon found ourselves in woodland beside the River Tame, near to where it joins up with the River Goyt to form the Mersey. 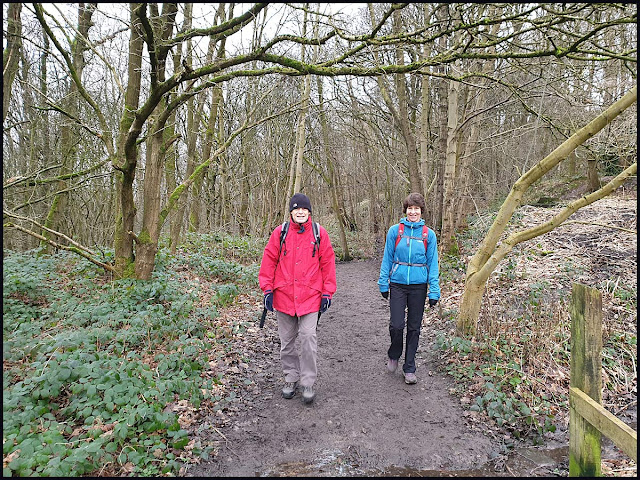 It was a wintry view today, with greenery provided courtesy of the mosses and lichens that cover almost every bit of bare wood. 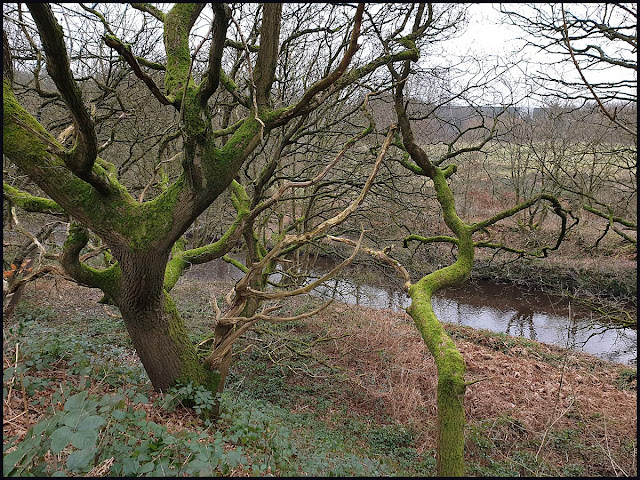 I dutifully showed Sue and Paul Harrison's Weir, dating from the early 1780s. It's in need of a bit of repair. 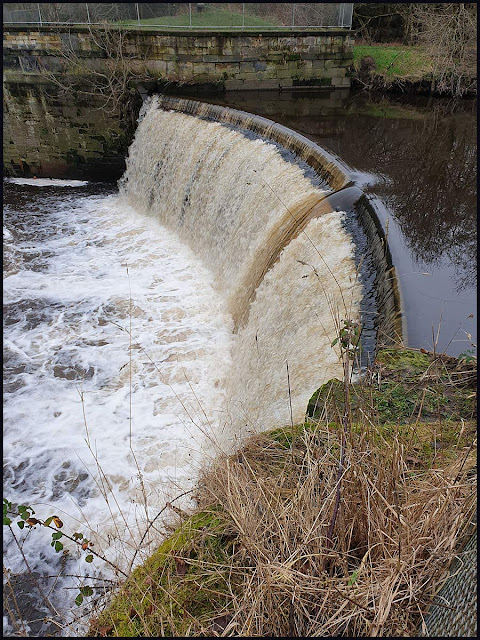 We normally cross the bridge leading to Reddish Vale Visitor's Centre on our bikes, without noticing the carved inscriptions at either side of the bridge, denoting the old border between Cheshire and Lancashire. Interestingly, there's a bee emblem on the Cheshire side, and a rose on the Lancashire side. I've rather amateurishly stitched a few photos together. If you click on the images you'll get a better version.

Amongst other information, these plaques state that Lancashire was formed in 1351, and that the Heatons and Reddish were transferred to the Borough of Stockport in 1916. They also state that since 1974, wherever you stand on the bridge you are in Greater Manchester. That makes these plaques quite recent.

From the bridge, there's a view over a small nature reserve - lots of varieties of ducks on view - and to the impressive Reddish Vale viaduct.

Our route headed east, under the massive arches of the viaduct. 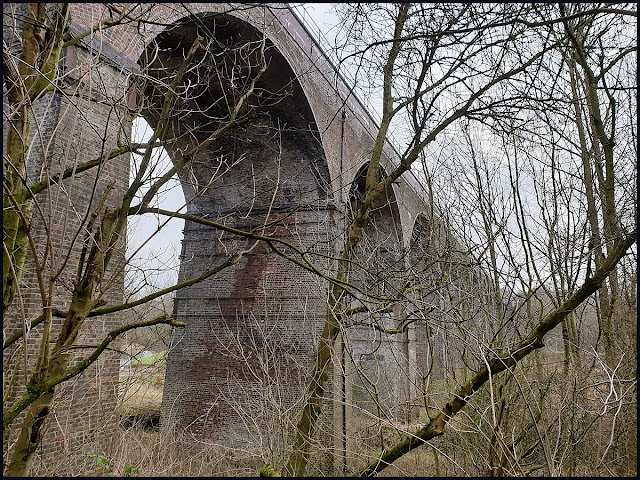 We then passed under the M60 motorway and crossed some waterlogged fields that challenged the trail shoes that Sue and I were wearing. 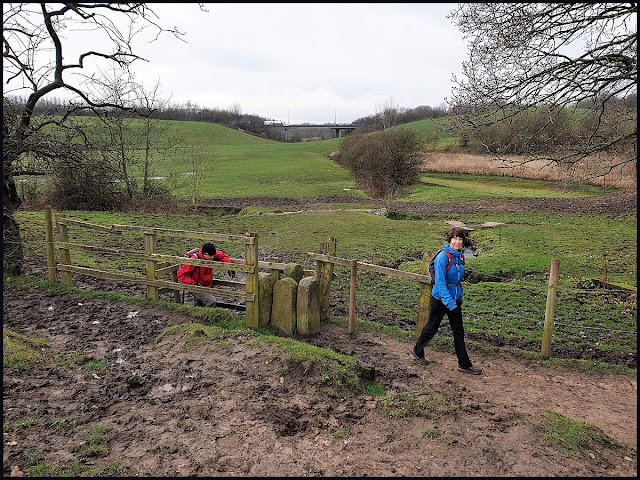 Eventually, after more pleasant walking (and lunch on a convenient bench) beside the River Tame, we took a pretty walled path (see top picture) up to the Peak Forest Canal. The sun came out and provided some lovely reflections. 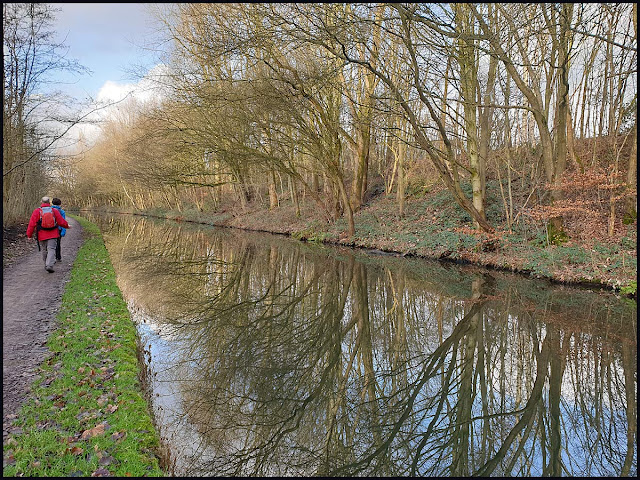 Reaching the Portland Basin, the Peak Forest Canal meets the Ashton Canal and the Huddersfield Narrow Canal. Some of the street furniture there looks in need of renovation! 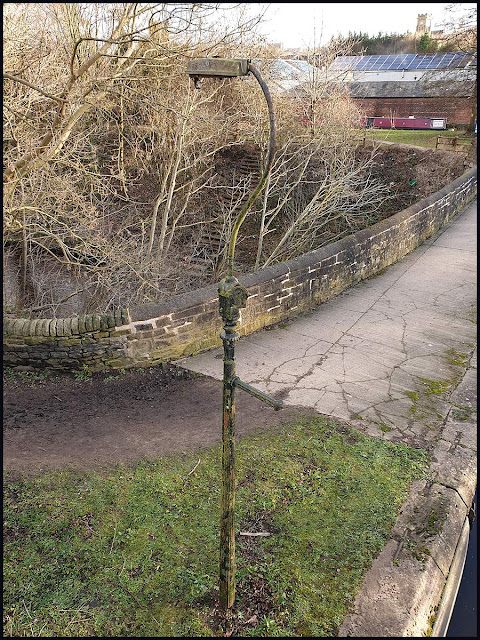 From the same spot - a rather better view towards the Portland Basin Museum (open) and its attached café (closed). 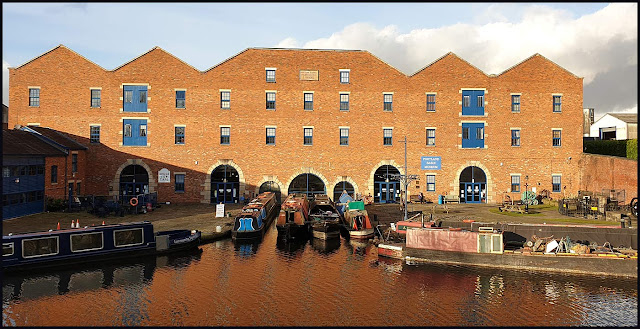 Ashton Metrolink Station is nearby, so we strolled along to it and caught a tram home.
We had walked about 16 km, taking around four hours, on this enjoyable excursion.
Next:

Posted by Phreerunner at 21:19 No comments: 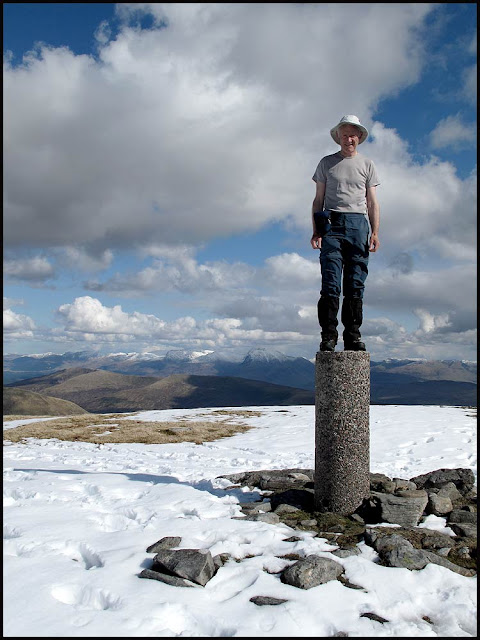 This photo is from 10 May 2009, when Sue and I camped near the summit of Gulvain. The route I vetted yesterday went very close by, and my enquiries about the route near the A' Chuil bothy led me to the explanation as to why Sue and I didn't find a bridge mentioned by my vetter at the time, Alan Hardy. We were on the wrong path through Glendessarry - we should have gone through the wood that's to the south of the main path.
I wish I could still climb trig points like that!

Posted by Phreerunner at 21:55 No comments: 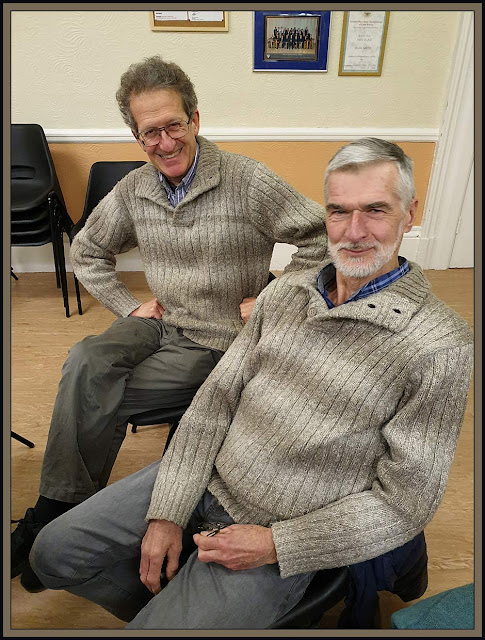 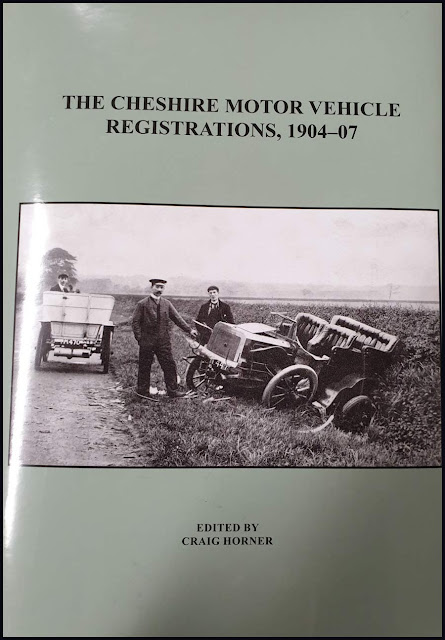 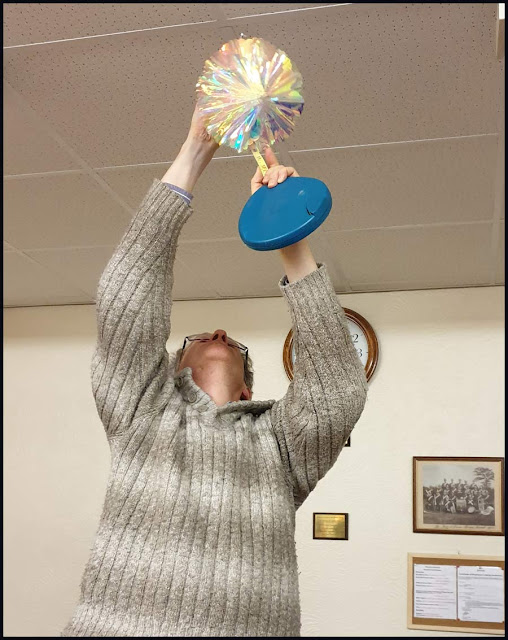 Posted by Phreerunner at 19:38 No comments: 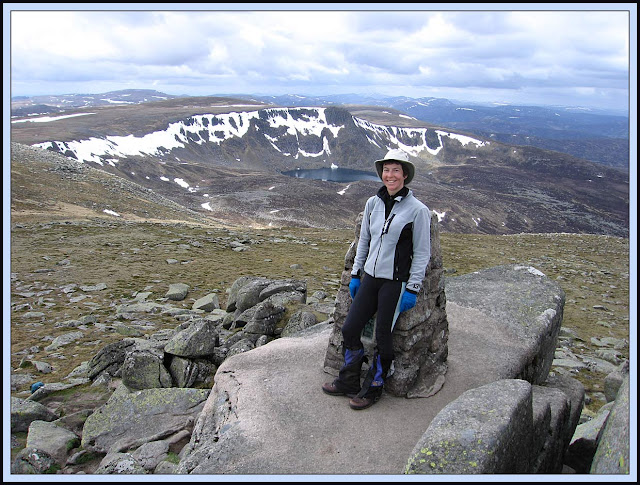 I've had the pleasure today of vetting a route that includes a day that almost exactly replicates the day Sue and I spent on 19 May 2008. I wrote about it here.

I hope that Myles can enjoy his day in May on these hills as much as we did.

Sue is pictured above with the view from the summit of Lochnagar, back to Loch nan Eun.
Posted by Phreerunner at 14:56 No comments: 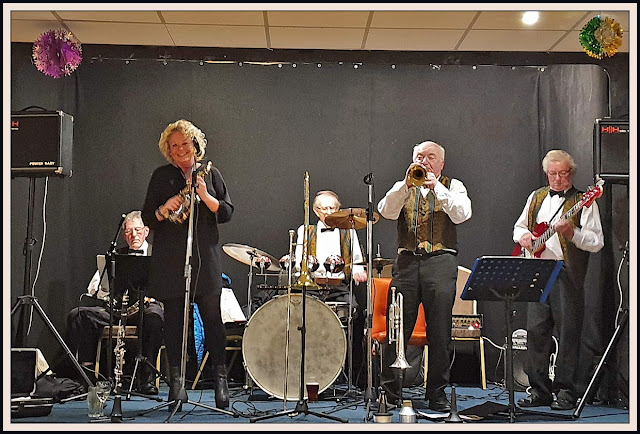 Another excellent night at the Jazz Club, with an entertaining performance from this band of accomplished musicians, details of whom can be found here.
Music from the 1920's was the theme of the evening, and very good it was as well. They only seem to come once a year, and we missed them last year.
And just when we didn't need it, being just after Christmas, Sue and I won a large box of chocolates in the raffle!

Posted by Phreerunner at 22:12 No comments: 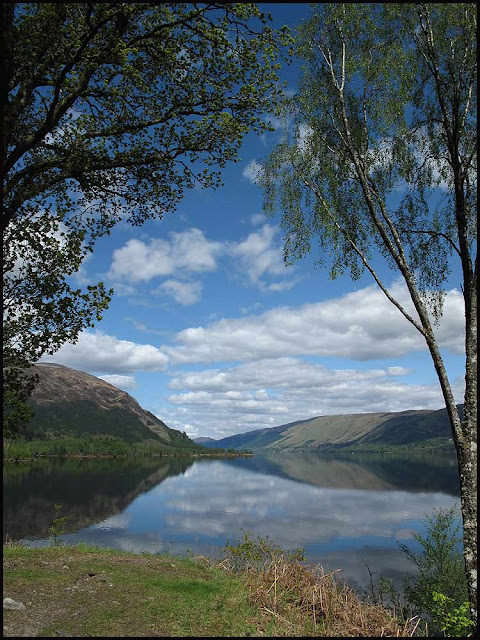 Another picture from the same (2009) Challenge as the previous two postings.
Our route joined the Great Glen Way for a while, passing by the southern end of Loch Lochy towards Gairlochy.
The views up Loch Lochy were immaculate, with birch and beech trees almost visibly bursting into leaf on the hot day.

Posted by Phreerunner at 14:52 No comments: 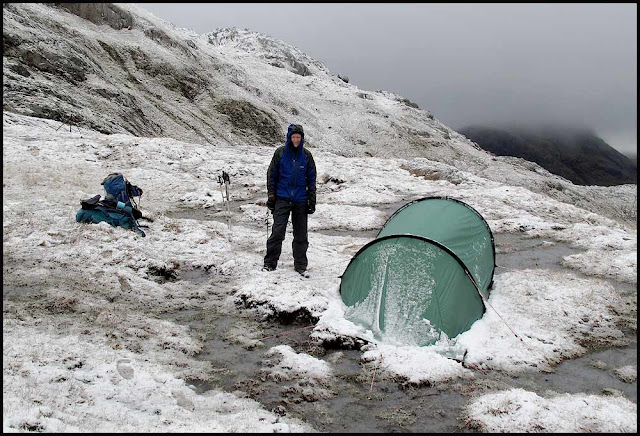 Here's our camp that preceded the idyllic spot beside the Finiskaig river in the previous posting. I suppose that given the pace of global warming such pictures as this will become a rare sight on the Challenge in May.

We were camped at about 680 metres by Allt a Choire Odhair, which looked like this when we pitched the tent: 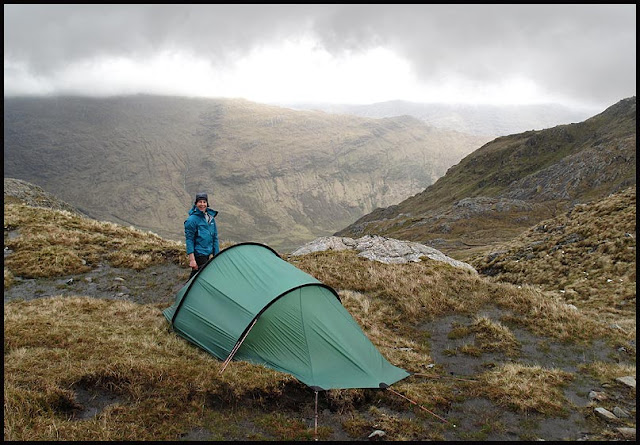 A reminder of this, our first day out of Mallaig, is here.
Posted by Phreerunner at 16:18 2 comments: