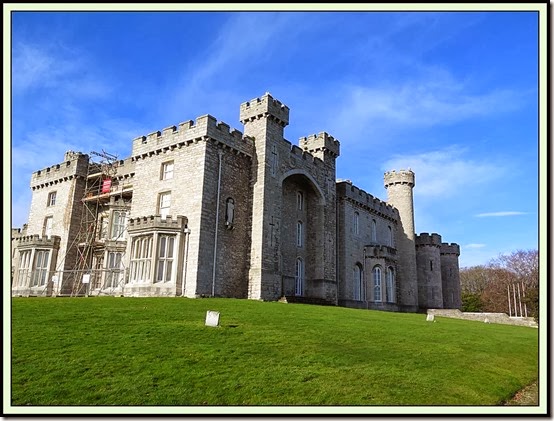 Last weekend saw us enjoying a break at Bodelwyddan Castle with Robert and Lyn.

Saturday came with bright sunshine and a light frost above 300 metres. Sue and I left the others to their bikes and were 'soon' (if 11 o'clock is so defined) above that height at the Moel Famau car park.

It was our first daytime walk together for some time, and what a cracking day for it.  In a few minutes we were on the 511 metre summit of Foel Fenlli, admiring views towards the coast and to Snowdonia's magnificent (but distant) snow clad summits. 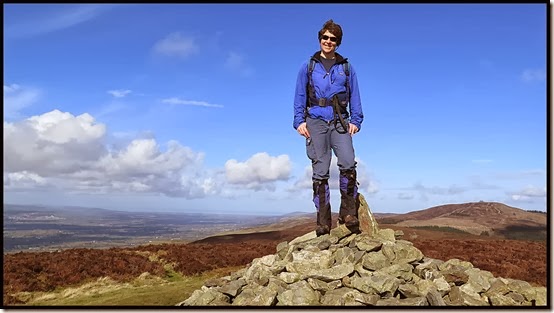 Ambling down to the Offa's Dyke footpath to our south, we encountered a grumpy looking lady who was labouring a long way behind her partner – he had no doubt absconded from the marked LDP (Long Distance Path) route in order to bag this fine little summit.

What a contrast to the friendly mountain bikers and the elderly lady we met as we continued over surprisingly dry ground before leaving the national trail and popping up to the 467 metre summit of Moel Gyw, where the raised platform of an ancient hill fort appears to house the highest point. Here I am, approaching the trig point, with the true summit behind me. 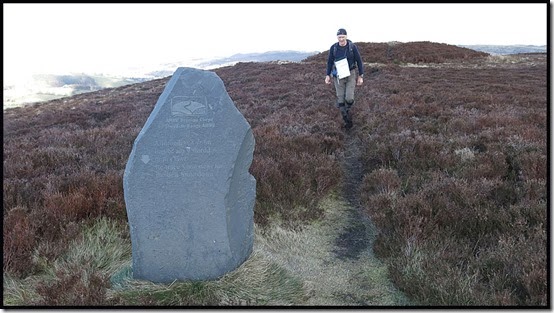 We lazed here, under a cloud, for some time, slightly envious of those sunbathing on Foel Fenlli, pictured behind Sue. 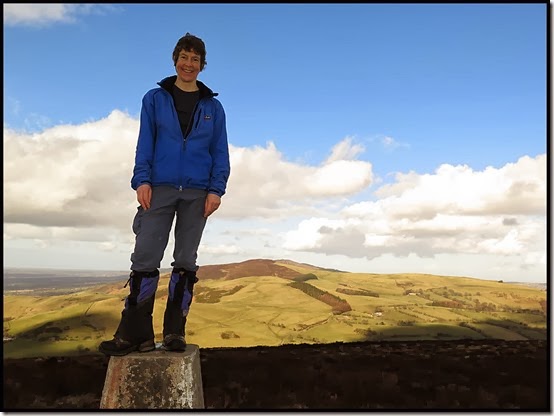 A sharp descent to the north brought us to an amiable path with mewing buzzards on which we paused for lunch - a bar of Green and Black's dark chocolate with crystallised ginger, and a banana, between us.

That refreshed us for a mini adventure in the wood south of Ffynnon-y-berth. Here the path had been obliterated by recently fallen trees. It must have been a bit breezy! We laboriously bush whacked a way through, only to discover that we could probably have avoided the chaos by hopping over a fence and across a field. That wouldn't have been so much fun though. 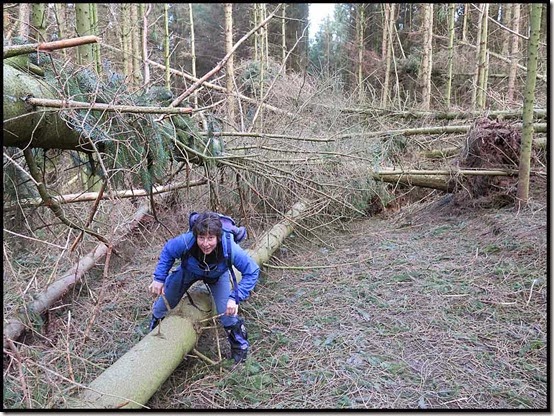 The jungle experience turned out to be a one off, as the rest of the woodland we passed through on this trip seemed hardly affected.

I picturesque cottage at Wern sported a pretty glade of Snowdrops. 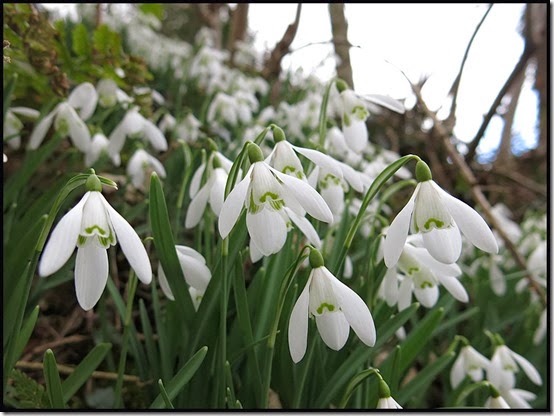 Our next obstacle was the frequently experienced 'Welsh Footpath Problem'. Various signs near Four Crosses required us to ignore our allegedly incorrect map and take to the lanes for a while in order to circumvent a few metres of a linking path that some Welsh peasant (probably an English expat) has taken possession of.

After that we managed to regain and more or less continue along our planned route back to the car park below Moel Famau, noting that certain paths marked on our map don't actually exist on the ground.

It's best to keep to the waymarked routes, we decided, especially the good paths near the fleshpots of Loggerheads, where we enjoyed the last of our tea. 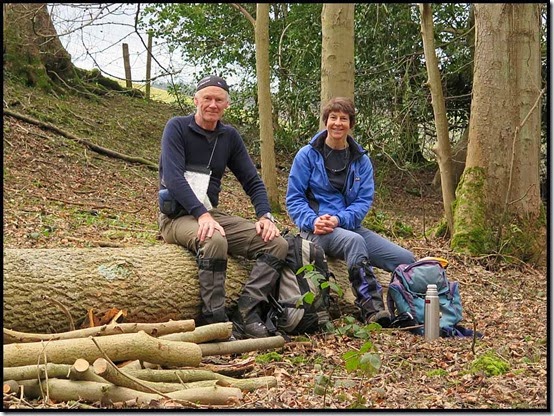 Grey wagtails, fine beech woods that reminded us of the Apennines, and a fine old bridge were highlights of the latter phases of the walk, as well as a well constructed new path through the woods to Bwlch Penbarras.

The walk was 20.5 km with 800 metres ascent, taking us about 6 hours including stops.

Sunday saw us waking to the sound of rain after Saturday night's entertainment from a 'tribute band' - The Karpenters. Apparently they are hot acts in China and in Toronto, as well as in St Asaph city.

Lyn had been unwell* since yesterday afternoon, so we left her in Robert's capable hunting for birthday presents hands and headed back to the Offa's Dyke path.

From the car park to its south, the iron age fort at Penycloddiau is easily accessible. Today the views from the Offa’s Dyke path were a little muted. 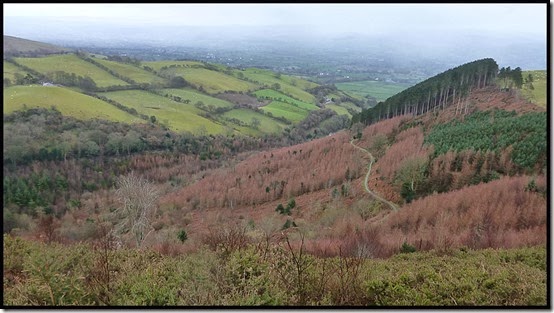 We soon reached the 440 metre summit, from where Moel Famau was clearly visible through the showers to the south. 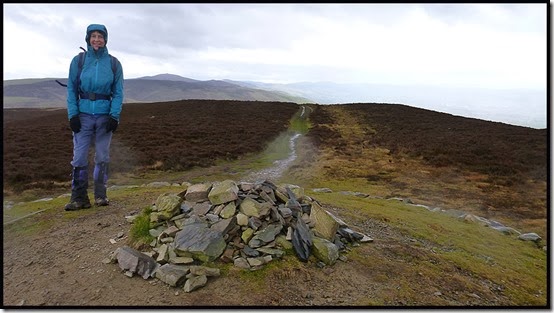 This demanding walk along the Offa's Dyke path was all of 3.5 km in distance, with a stupendous 150 metres of height gain. A good way to spend an hour or so between showers.

A short drive then found us in a lay by with red kites in the shadow of Mwdwl-eithin (532 metres), the highest point in the neighbourhood. So we went up it. An easy direct ascent over soft grass. Rather easier than the expected peat hags. Good views from the summit, with the snow streaked Berwyn Hills conspicuous to the south east. 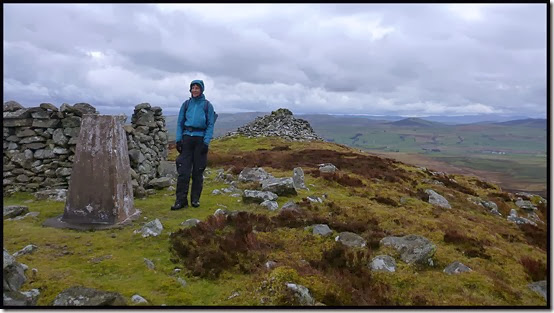 There was nobody around for miles, or so it seemed, and a convenient break in the showers left us dry after an enjoyable 5 km with 140 metres ascent, taking about an hour and a half.

That left plenty of time for a leisurely motor back to the castle and an exciting game of indoor bowls with Robert and Lyn when they returned from Bodnant Gardens.

Monday saw a return to the fine spring weather for our long journey home.

Before that, a wander around the site, table tennis and swimming, etc, ensured that we gained full value from the venue… 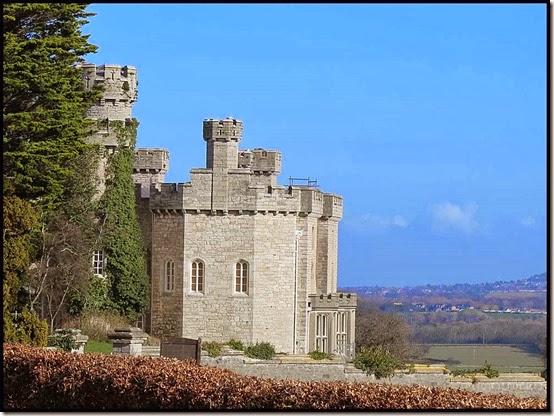 Trees in full blossom in the garden… 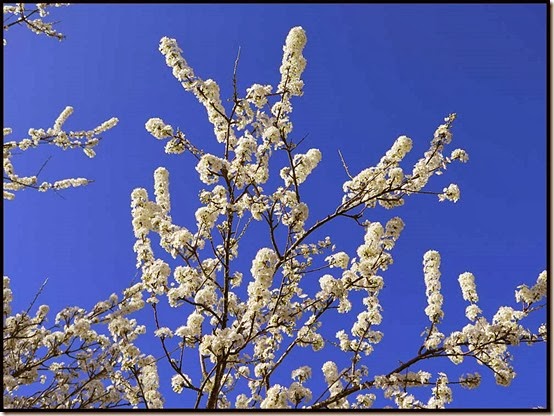 An aviary crammed with Zebra Finches from Australia… 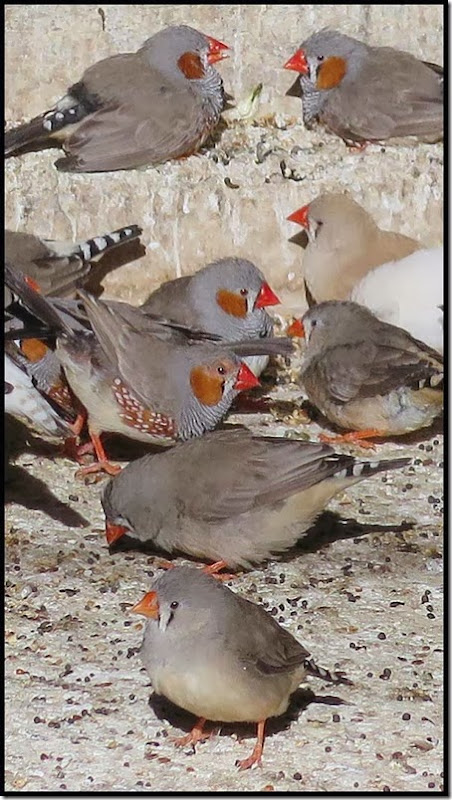 That left time for another short stroll from the viewpoint at Waun y Llyn. 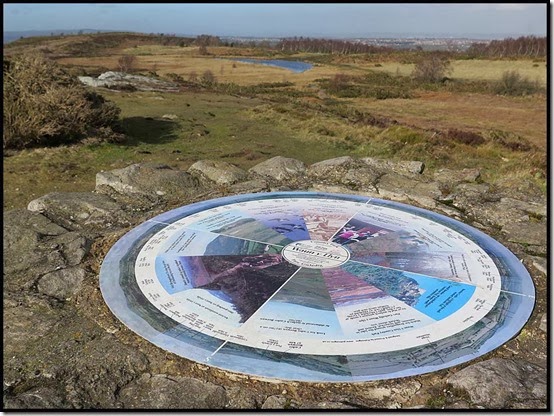 Pleasant grassy fields took us to the raised trig point at the 330 metre summit of Hope Mountain, with views back to the Clwydian summits we’d traversed over the weekend, and to the north, Cheshire’s Central Ridge. 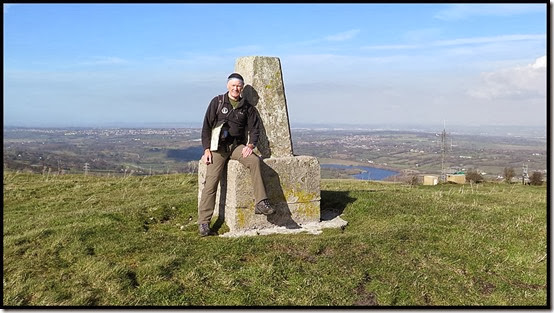 Another 4 km with 100 metres ascent, taking little more than an hour, enabling us to return home for a late lunch.

A pleasant little break. The full (50+ image) slideshow is here, although you’ll have to look elsewhere for pictures of Robert and Lyn…

* Lyn - I remember that day, many years ago, when my birthday first made me feel ill. It happens every year now. Perhaps you have now passed a critical age and have this debilitating illness to look forward to for the rest of your days!